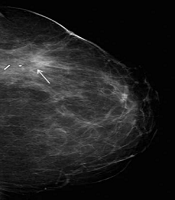 Fat Necrosis in the Post-Surgical Breast: Dependence on Adjuvant Treatment and Morphology on Digital Mammography

Fat necrosis is a common finding after trauma or surgery of the breast. There are various presentations on imaging and differentiation from malignancy can be challenging.

To analyze early signs of fat necrosis on postoperative mammograms after the excision of benign and malignant findings in accordance to modern adjuvant treatment.

A retrospective analysis was performed as part of an audit. Mammograms of 39 patients, who underwent surgical excision of benign disease, and 81 patients with cancer surgery, were reviewed. Adjuvant therapy, such as radiotherapy, chemotherapy and hormonal treatment, was noted.

Clinically, fat necrosis often manifests as a hard, palpable lump, and as it often occurs around the tumour bed this can cause anxiety in patients. Therefore, imaging to exclude recurrent disease is of great importance.

It is known that iatrogenic or non-iatrogenic trauma to the breast can induce the development of fat necrosis (1, 2, 12, 13). The mean time between breast trauma and the clinical manifestation of fat necrosis as a palpable lump is 68.5 weeks (2). In the absence of a history of trauma most fat necrosis lesions are found in the upper inner quadrant of the breast, which is thought to be due to the use of seatbelts (14).

Aim of this study was to compare the incidence and mammographic appearance of fat necrosis in the post-surgical breast on digital mammograms with and without adjuvant treatment. This will serve as a comparison study to the upcoming neoadjuvant radiotherapy (neoRT) trial (19), where radiation therapy will be administered prior to surgical therapy.

This study was registered as a service evaluation at Cambridge University Hospitals NHS Foundation Trust to evaluate if the rate of detected or caused fat necrosis is higher than expected. A retrospective analysis of all consecutive patients with benign findings managed by surgical excision between January 2011 and December 2014 was performed. Forty-seven patients diagnosed with a lesion of uncertain malignant potential on needle biopsy required open surgical biopsy and confirmed to be non-malignant. Eight patients were excluded as no post-surgical mammographic follow-up was available, leaving a total of 39 patients in the study group.

One reader with six years of experience in reading digital mammography (H.P.) performed the image analysis. The reader was aware of the laterality of the finding as well as the pre-therapeutic imaging but was not aware of the treatment additional to surgical excision. It was noted if there was any sign of (developing) fat necrosis on post-surgical imaging, such as lucencies, masses or calcifications. Measurement of the findings was performed. Findings were noted separately for each imaging time point. The different appearances of fat necrosis were noted.

In the benign group, surgical excision was performed with help of wire marking. The lesions were impalpable in 14 cases (35.9%). Repeated surgery was performed in one case (2.6%) due to suspicion of microinvasion at the margin of atypical ductal hyperplasia (ADH) after the first surgery with no residual disease in the second surgical specimen and therefore, final diagnosis of ADH.

4.4. Adjuvant Therapy in the Malignant Group

Table 1. Different Appearances of Fat Necrosis on Mammograms in the Benign and Malignant Groupa

In one patient fat necrosis was detected as lucency only (Figure 1), in 18 as pure calcification, and in 11 patients as lucency with calcifications (Figure 2A and B). In one case a mass on post-surgical mammograms was aspirated and turned out to be an oil cyst (Figure 3). In one case without signs of fat necrosis, DCIS was detected on the second mammography follow-up in the benign group. First post-surgical follow-up mammogram after breast conserving therapy in a 67-year-old patient due to 31 mm unifocal ductal carcinoma in situ (DCIS) in the left breast. Fat necrosis presented as a lucency anterior to the surgical clips (arrows). First (A) and forth (B) post-surgical follow-up mammogram after 0.9 and 4.0 years, respectively. Breast conserving therapy of a 5 mm invasive carcinoma in the left breast was performed. In the area of the post-surgical clips at the 12 o’clock position scarring tissue as well as a lucency in the centre of the clips is visible (A, arrows), which shows calcification later on (B) typical for fat necrosis. Table 2. Development of Fat Necrosis According to Adjuvant Treatment and Invasive or Non-Invasive Cancer in the Malignant Groupsa

Table 3. Logistic Regression Analysis of Factors Influencing the Development of Fat Necrosis in the Malignant Group

The frequency of fat necrosis development did not differ significantly between invasive and non-invasive cancers (P = 0.83) (Table 2).

The appearance of fat necrosis ranges from incidental benign findings to imaging features highly suggestive of malignancy (20, 21). The majority of fat necroses presented as pure calcifications in our study (59.4%), followed by lucencies with calcifications (34.4%). This is in accordance with literature pointing out dystrophic calcifications and radiolucent oil cysts as the most common mammographic findings (8). If fat necrosis becomes manifest as calcifications only the probability that it is mistakenly scored as suspicious for recurrent malignancy is high. In case of a lucency in addition to the calcification, the fat necrosis can be verified on ultrasound (21). The mean follow-up time until fat necrosis manifested on the mammogram was 2.6 years in the benign and 2.0 years in the malignant group. As 46.2% of the fat necrosis after surgery of breast cancer were initially detected more than two years after the surgery, it is reasonable to have annual follow-up of at least 5 years to be able to detect those changes. Even on MRI a delayed development of enhancement in fat necrosis has been reported (22). If accessible, MRI has an excellent negative predictive value in case of uncertain mammographic lesions without enhancement, but if there is enhancement in a probable fat necrosis, biopsy has to be performed to exclude malignancy (22).

There are limitations in our study. First, due to the small case numbers overall and the small case numbers of histopathological cancer types other than no special type (NST), no analysis of a possible impact of tumor histopathology on the development of fat necrosis could be performed. Second, the presence of fat necrosis was only rated radiographically as ultrasound follow-up is not performed routinely in Cambridge or the UK.

In conclusion, this study shows the supposable impact of adjuvant therapy to the development of fat necrosis after surgery in a series of cancer patients with adjuvant radiotherapy compared to patients with surgery of benign findings. This has to be compared to the incidence, morphology, and time span of the potential development of fat necrosis after neoadjuvant radiotherapy with and without chemotherapy and hormonal treatment as part of the radiated tissue will be removed during surgery.

We gratefully acknowledge the help of Charlotte Coles, MD, correcting the manuscript.