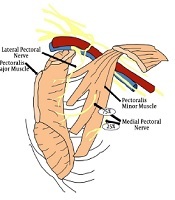 Although schwannoma may occur in any organ, it very seldom appears as an interpectoral lesion and rarely arises in the brachial plexus. We here report the case of a breast cancer patient with a schwannoma located in the interpectoral space that mimicked a metastatic lymph node with various imaging modalities, including ultrasonography, magnetic resonance imaging, and positron-emission tomography/computed tomography. Awareness of its location and imaging features on various modalities is helpful for identifying schwannoma mimicking a metastatic interpectoral lymph node in breast cancer patients without axillary level I lymph node metastasis.

Schwannoma is a benign tumor of Schwann cell origin, also referred to as neurilemmoma or neurinoma. Schwannoma arising in the brachial plexus is extremely rare (1). Described as most commonly located in the extremities, trunk, and head, it is rarely found in the axilla (2, 3). This tumor type comprises less than 5% of tumors of the upper extremities (4). We describe the various imaging findings of a schwannoma located in the interpectoral space of a patient with breast cancer, where it mimicked a metastatic lymph node.

A 50-year-old female patient was diagnosed with invasive ductal carcinoma in her left breast during follow-up of multiple, probably benign, breast nodules. She visited our hospital for further examination and treatment. She had a sister who had been diagnosed with breast cancer. Upon physical examination, a painless mass in the left lower inner breast was palpable, with no nipple discharge or inversion and no palpable lesions in the axillary area.

Mammography showed heterogeneously dense breast tissue without abnormality in both breasts and axillae. Ultrasonography (US) revealed a 1.4 cm irregular mass in the left lower inner breast and a 7 mm well-defined ovoid nodule in the left interpectoral space, mimicking a lymph node (Figure 1A). Color Doppler images showed that the nodule had no significant vascularity (Figure 1B). There were no suspicious lymph nodes at level I of the axillary area. Breast magnetic resonance imaging (MRI) revealed a 7 mm ovoid nodule in the left interpectoral space. The nodule was isointense relative to skeletal muscle on T1-weighted axial images (Figure 2A). T2-weighted images with fat saturation demonstrated low signal intensity in the central portion and high signal intensity in the periphery of the lesion (Figure 2B). Subtracted gadolinium-enhanced T1-weighted images showed a rim and persistent enhancement (Figure 2C). Furthermore, positron-emission tomography/computed tomography (PET/CT) revealed a mild hypermetabolic lesion, which had a maximum standardized uptake value of 1.9 (Figure 2D). The findings of all imaging modalities, except mammography, were suggestive of breast cancer with a metastatic lymph node in the ipsilateral interpectoral space.

Ultrasonography (US) findings of an interpectoral schwannoma in a 50-year-old patient with breast cancer. A, US shows an oval-shaped, well-defined, and hypoechoic nodule in the interpectoral space. B, Color Doppler US demonstrates no appreciable vascularity in the nodule. The patient underwent breast conserving surgery with flap reconstruction and excision of the interpectoral nodule. US-guided charcoal injection of the nodule was performed for intraoperative frozen biopsy. After surgery, pathological examination revealed that the breast mass was invasive ductal carcinoma and the interpectoral lesion was a schwannoma (Figure 3). Histopathological findings of interpectoral schwannoma in a 50-year-old patient with breast cancer. Photomicrograph of a histological section shows a palisading arrangement of spindle cells with wavy nuclei abutting a normal nerve (arrow) (hematoxylin-eosin stain; original magnification, A, 40×; B, 100×).

Previous case reports have described the US findings of schwannoma as a well-defined hypoechoic mass with an internal heterogeneous echotexture (5). An echogenic ring within the mass is a rare but pathognomonic feature of nerve sheath tumors, such as schwannomas and neurofibromas (5, 6). Color Doppler US of schwannomas shows no appreciable vascularity (6). In our case, US showed a 7 -mm, well-defined, ovoid nodule without vascularity, located in the interpectoral space, which mimicked a lymph node. On MRI, a schwannoma typically appears as a well-defined mass that is homogeneous and isointense relative to skeletal muscle on T1-weighted images, while T2-weighted images reveal a hyperintense mass with a central low-signal area and strong enhancement after contrast agent administration (2, 6). On T2-weighted images, the peripheral hyperintense signal is due to the presence of myxoid tissue, and the central low signal intensity is due to the presence of fibrocollagenous tissue (7). In our case, T2 findings indicated schwannoma, with a high signal intensity mass with a central low-signal area and strong enhancement, but it also mimicked a lymph node. Although identification of a nerve entering and exiting the mass is diagnostic of a nerve tumor, we did not find a nerve associated with the mass on US and MRI; the size of the nodule and the diameter of the associated nerve were too small to reveal the relationship between the nerve and the mass. Given the location of the schwannoma, we suspect that it originated from a branch of the pectoral nerve (Figure 4) (8). Schwannoma arising in the brachial plexus is very rare (1). Brachial plexus schwannoma typically presents clinically as a solitary, slow-growing, asymptomatic (5, 9). In our case, the patient visited our hospital because of left breast cancer, without neurological symptoms. After breast cancer workup using various imaging modalities, the patient was suspected to have a metastatic lymph node in the interpectoral space. However, the nodule was revealed to be schwannoma by surgical pathology. There have been two previous case reports of schwannoma arising in the brachial plexus mimicking a metastatic lymph node in patients with breast cancer (1, 10). In one case, the tumor exhibited lymph node-like US findings and high metabolic uptake on a PET/CT scan, before finally being confirmed as schwannoma after surgery (10). In the other case, CT demonstrated a round homogeneous tumor in the left axillary region. It was suspected to be a metastatic lymph node because of its location (1). However, in contrast to our case, in both previous cases the lesions were located at level I of the axillary lymph node.

The differential diagnosis of schwannoma in the interpectoral space in patients with breast cancer includes lymph node metastasis from carcinoma, neurofibroma, and hemangioma. Differentiation of schwannoma from metastatic lymph nodes may be difficult. In a patient with combined level I axillary lymph node metastasis, a metastatic lymph node is more likely. Neurofibromas commonly have imaging findings similar to those of schwannomas (11, 12). If the tumor has an eccentric nerve-tumor position in addition to demonstrating an entering or exiting nerve on the images, it is more likely to be a schwannoma than a neurofibroma (13). Because of its eccentric and noninfiltrating growth, schwannomas can often be excised easily, without any or with only slight damage to fascicular structures (4). However, US and MRI cannot always reveal the connection of the tumor to the nerve, and it is difficult to diagnose schwannoma based on imaging findings alone. On US, hemangioma appear as a complex mass containing dilated vascular channels (2). Color Doppler US may show hypervascularity and low-resistance arterial flow with forward flow during both systole and diastole (14). MRI reveals marked hyperintensity on T2-weighted images, indicating the central angiomatous core of the neoplasm. Signal intensity voids caused by rapidly flowing blood can also be seen (14).