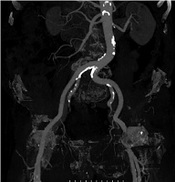 We retrospectively reviewed the unenhanced computed tomography scans of 197 patients from August 2016 to March 2018. Using calcium-scoring software, we examined the distribution map of calcified plaques, focusing on four different arterial segments -the abdominal aorta, the common iliac artery (CIA), the external iliac artery (EIA), and the common femoral artery (CFA)- to determine which one showed the least mural calcification.

Atherosclerosis, or the hardening of arteries, usually manifests with mural calcification (1). Vascular calcific deposition has long been implicated in the formation of atherosclerosis. The vascular calcification in the intimal or medial layers of the arterial wall is routinely detected. Many studies have indicated that calcified plaque buildup, termed arterial calcification, could be associated with technical failure of arterial anastomosis, delayed graft function (DGF), subsequent vascular morbidity analogous to steal syndrome and risk of operative complexity (2, 3). Arterial calcification is quantified by a measurement technique called the Agatston score and has a substantial effect on patient survival (4, 5). Over the past few years, we noticed a relative atherosclerotic sparing of the external iliac artery (EIA) compared to adjacent arteries. This is not a well-described phenomenon in the literature. Similar findings in other vessels have been attributed to the histological features of the wall or its anatomical feature (6).

This study was designed to test our hypothesis that fewer atherosclerosis changes occur in the EIA than that of adjacent arteries. If true, this could have significant implications on vascular and transplant surgery, for example in the choice of arterial anastomosis in solid organ transplantation or bypass graft placement.

Institutional review board approval was obtained for collecting data and interpreting the analysis. The study protocol was approved by our institution’s research ethics committee. In this study, 197 patients with non-contrast-enhanced abdominopelvic computed tomography (CT) scan from August 2016 to March 2018 were retrospectively evaluated (Figure 1). A non-contrast-enhanced CT scan of the abdomen and pelvis was performed in patients with non-traumatic abdominal pain, suspected renal stones, and urologic disorders or fever of unknown origin (highly suspected to be of abdominal abscess). Image evaluations were performed simultaneously by an experienced cardiovascular radiologist. Patients with prior arterial stent implantation in the abdominal aorta, common iliac artery (CIA), external iliac artery (EIA), common femoral artery (CFA), a history of operation on the arteries of interest, a former pelvic surgery, presence of a severe motion artifact or metallic artifacts from adjacent prosthesis that preclude accurate interpretation (at radiologist’s discretion) were deemed ineligible for our study. Images from the abdominal and pelvic CT scans (Brilliance 64, Philips Medical Systems, Cleveland, Ohio) were retrospectively evaluated. Images were reconstructed with the following settings: collimation: 32 × 1.25 mm; gantry rotation time: 0.5 ms; tube voltage: 160 kV; tube current: 390 mAs; and pitch: 0.97. Each complete scan contained 50 - 60 contiguous, non-overlapping, 512 × 512 matrix slices over a 35-cm field of view, with peak tube voltage of 160 kV using 100-ms exposure time with 3-mm slice thickness. For purposes of this study, we defined abdominal aorta from the diaphragmatic level to the aortic bifurcation; common iliac artery (CIA) from the aortic bifurcation to the CIA bifurcation; EIA from the CIA bifurcation to the inguinal ligament; and common femoral artery (CFA) from the inguinal ligament to the CFA bifurcation. To determine the calcium score of the abdominal aorta, CIA, EIA, and CFA, calcium-scoring software was used to measure the mean Agatston score, which is based on the weighted density score given to the highest attenuation value (Hounsfield unit [HU]) multiplied by the area of the calcified plaque. The mean Agatston score was calculated with semi-automated software (HeartBeat-CS, Brilliance Workspace, Brilliance 64, Philips Medical Systems) by using detection of calcified plaque with a threshold of 130 HU and a minimum area of 1 mm2. Due to close proximity of internal iliac artery (IIA) to the sacral bone and calcification in its small branches, we could not measure the calcium score by our software meticulously.

Generalized estimating equations (GEEs) were used to evaluate the age, gender, smoking, hypertension, diabetes and hyperlipidemia -adjusted effect of arterial anatomic position on the calcification level. The GEE procedure extends the generalized linear model to allow for the analysis of repeated measurements or other correlated observations. The use of this statistical method allows for the use of other vessels in each patient as the internal control. This will control the effect of confounders. Calcification score was considered at four levels: 0, 1 - 100, 101 - 400, and higher than 400. According to the calcium measurement scale, cumulative logistic function in GEE was used to estimate the parameters. Sub-group analysis was performed in order to determine the validity of the findings in patients with more severe atherosclerotic disease. Odds ratios (ORs) and 95% confidence intervals (CIs) of calcium scoring were examined for the aforementioned four arterial anatomic positions. bOdds ratio (OR) and 95% confidence interval (CI) of calcification in different arterial segments were determined based on an ascending succession in the arterial system.

There is a paucity of studies showing sparing calcification in EIA despite gross calcifications in different adjacent vascular segments, abdominal aorta, CIA, and CFA. We examined the distribution map of calcified plaque, focusing on four different arterial segments to determine the lowest calcification score among them and we found out that EIA shows a significantly lower degree of atherosclerotic calcification compared to abdominal aorta, CIA and CFA. The importance of this finding may influence decisions for the usefulness of harvested EIA as an allograft in place of synthetic grafts or xenografts, which are currently used for some cases who are in need of a vascular graft.

Conduit calcification and stenosis is one of the complications in the placement of right ventricle to pulmonary artery conduit (7). Previously, the pulmonary homograft (PH) was selected mostly for the right ventricle to pulmonary artery (RV-PA) conduit (8). However, calcification and stenosis with deterioration of valve function have been shown in different studies (8-10). Amongst various conduit materials, the expanded polytetrafluoroethylene (ePTFE) has yielded minimal rates of complications including conduit stenosis, conduit regurgitation and conduit reoperation (8, 11). Despite its benefits, the availability of ePTFE could be limited at small institutions. Based on our findings, EIA could be used as a graft target due to its less calcific plaque burden compared to the adjacent arterial bed. There is scant evidence of using EIA as a conduit placement option. It may be worthy to plan a study for harvesting EIA as cadaver arterial allograft for placement of the right ventricle to pulmonary artery conduit with regards to relative atherosclerotic sparing of the EIA.

Additionally, future studies could be performed in order to demonstrate EIA as a less vasculopathic arterial graft target in different regions. This can be done by end-to-end anastomosis to the patent part and replacing the occluded section by EIA.

It is well established that vascular calcification is the main cause of multiple complications in renal transplant surgeries, including the process of anastomosis, difficulty in vessel clamping, impaired graft function, and the occurrence of arterial steal syndrome or limb ischemia (12). Most practices require an entity of vascular imaging (usually an ultrasound) before deciding the proper site for anastomosis of the new implant, in part to assess the size and health of patent arteries. Calcification can occur in either the intimal or medial layer of the arteries (13). Intimal calcifications can be accelerated by advanced age, diabetes, and the presence of atherosclerosis; however, medial calcification can be found in people of younger age and in those who are on dialysis therapy (3). Aitken et al. showed high intraoperative complication rates and delayed graft function in patients with moderate to severe vascular calcifications (12).

This study compares calcification plaque in different segments of pelvic arteries. Our findings suggest that EIA can possibly be a less vasculopathic target for arterial grafts.

Our study was limited by its retrospective design and its small sample size, which reduced its precision. Therefore, future studies with larger sample sizes, more detailed evaluation of patient’s history and CT angiography as a better choice to define plaque burden will be necessary for better understanding of this phenomenon and its etiology.

In conclusion, EIA has a significantly lower degree of atherosclerotic calcification compared to the adjacent vasculature. This can prove a useful alternative in selecting a less diseased target for arterial graft and pelvic solid organ arterial anastomoses.