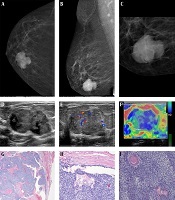 Eccrine hidradenoma is a benign tumor of sweat gland origin that rarely occurs in the breast. It is often mistaken for breast cancer on both clinical and radiological examination. We report the case of a 57-year-old woman with a complex cystic and solid mass in the right breast on ultrasonography that was assessed as breast imaging-reporting and data system (BI-RADS) category 4b. Complete excision yielded a final histopathologic diagnosis of eccrine hidradenoma. Knowledge of radiological findings of eccrine hidradenoma of the breast is important for radiologists to distinguish it from malignancy.

Eccrine hidradenoma is a rare, benign cutaneous tumor arising from the eccrine sweat glands (1). It commonly occurs in the face, scalp, trunk, and upper extremity but rarely in the breast.

We report the case of a 57-year-old woman with a complex cystic and solid mass in the right breast on ultrasonography that was assessed as category 4b (moderate suspicion for malignancy) according to the breast imaging reporting and data system (BI-RADS) (2). Complete excision of the mass was performed and histopathological analysis yielded a final diagnosis of eccrine hidradenoma.

A 57-year-old, postmenopausal East Asian woman presented with a painless lump in her right breast. She noted the mass one month before the clinic visit and had no other symptoms. Her past medical history included cerebral infarction 3 years prior.

A movable, non-tender mass was palpated at the 4 o’clock location in the periareolar area of the right breast. The mass was about 3.6 cm in greatest dimension. Nipple-areolar complex and skin were unremarkable. No palpable lymphadenopathy was identified in the axillae.

Ultrasonography of the right breast revealed a 3.9 × 3.4 × 2.0 cm oval shaped, circumscribed, complex cystic and solid mass with intratumoral calcifications at the 4 o’clock location in the periareolar area (Figure 1D). The solid component of the mass showed high vascularity on color Doppler imaging (Figure 1E). Strain elastography indicated that most of the solid component was hard (Figure 1F). No enlarged lymph node was identified in the axillae. Although the shape and margin of the mass were compatible with those of a benign mass and the mass newly developed in a postmenopausal woman and had intratumoral microcalcifications on mammography and showed a complex, solid, cystic, hypervascular hard mass on ultrasonography, we assessed the mass as BI-RADS category 4b.

The patient underwent initial ultrasound-guided core needle biopsy. The specimen showed features of trichoepithelioma, a type of cutaneous neoplasm. However, we considered the pathological and radiological findings to be discordant because the mass was located deeper than the skin layer on ultrasonography. Thus, complete excision of mass was performed to exclude malignancy. The right breast specimen measured 4.5 × 2.6 × 1.3 cm. Histopathologically, the tumor appeared to arise in the deep dermis abutting the breast parenchyma and had a characteristically biphasic morphology, consisting of plump basaloid cells as well as pale-staining cells, along with small foci of keratinization (Figure 1G, H, and I). The findings were consistent with those of an eccrine hidradenoma. No significant cytologic atypia was present. The final diagnosis was eccrine hidradenoma. The incidence of eccrine hidradenoma peaks in the 4th to 5th decades and appears to be higher in women than in men (4). It can occur anywhere on the body, and commonly reported locations are the face, scalp, ear lobe, axilla, trunk, and upper extremity (5). Eccrine hidradenoma of the breast is very rare, and only 14 cases have been reported in English literature (1, 3, 5-14). Its features somewhat different from similar lesions found in other parts of the body. The majority of eccrine hidradenomas in the breast present as painless lumps with a slow growth rate. Patients may have pain, nipple discharge, or skin ulceration (3). Eccrine hidradenoma of the breast commonly arises in the nipple and subareolar areas, but it can also originate in the deeper breast parenchyma like our case (11).

On histopathology, eccrine hidradenoma appears as either a well-circumscribed or lobulated mass in the dermis, with both solid and cystic components. The cystic component varies in size and is faintly eosinophilic and homogeneous (12). The solid component contains 2 types of cells. The dominant type is round and has a clear cytoplasm. The other is polyhedral, with basophilic cytoplasm. The tumor may also display focal cystic changes. Malignant transformation is extremely rare but possible. However, neither clinical presentation nor histologic appearance can predict malignant transformation. Malignant lesions tend to invade local tissue, in contrast with benign lesions (4).

The imaging findings of eccrine hidradenoma have not been well described because of its rarity and insufficient imaging evaluation.

The mammographic findings of eccrine hidradenoma are nonspecific. It can appear as a well-circumscribed, hyperdense mass on mammography (13). The most commonly reported features on ultrasonography are the presence of a circumscribed, complex, solid and cystic mass with vascularity on color Doppler study (6, 13, 15). The solid component may contain calcifications. The cystic component can show variable complexity in the presence of hemorrhage (14, 15). It can also appear as a circumscribed, solid, hypoechoic mass (16, 17). On magnetic resonance imaging, it may be seen as a circumscribed, solid, or cystic mass, usually with an intermediate-to-low signal on T1-weighted images and an intermediate-to-high signal on T2-weighted images. The solid component of the mass shows enhancement after intravenous contrast administration (16, 18).

The treatment of eccrine hidradenoma is complete wide excision. It is important to achieve clear resection margins (15). Recurrence has been reported and is associated with incomplete excision (15).

Although rare, malignant transformation can arise primarily or secondarily from a preexisting benign eccrine hidradenoma (4). Malignant eccrine hidradenomas, also known as hidradenocarcinomas or malignant clear cell hidradenomas, can metastasize through either lymphatic or hematogenous dissemination (4). Aggressive surgical treatment is necessary for these lesions, although the optimal treatment method has not been established. These tumors are not susceptible to radiotherapy and chemotherapy and are associated with a poor prognosis (19).

Radiologists should consider eccrine hidradenoma when a mixed solid and cystic mass is observed in the breast on ultrasonography, as it may mimic primary malignancy.

Copyright © 2020, Iranian Journal of Radiology. This is an open-access article distributed under the terms of the Creative Commons Attribution-NonCommercial 4.0 International License (http://creativecommons.org/licenses/by-nc/4.0/) which permits copy and redistribute the material just in noncommercial usages, provided the original work is properly cited.
download pdf 3.06 MB Peer Review Comments ( 112.20 KB) Get Permission (article level) Import into EndNote Import into BibTex
Number of Comments: 0