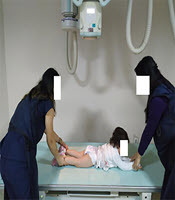 There are many studies suggesting that the pelvic radiographs taken in posterior-anterior (PA) projection cause far less radiation exposure than anterior-posterior (AP) projection. However, PA projection is rarely used in daily practice due to the concern that the obtained images will not provide radiological standards.

The aim of the study was to determine whether PA projections meet the radiological criteria of correct positioning as AP projections.

In this prospective study, radiographs of 160 patients (80 PA and 80 AP images) were obtained randomly. Pelvic rotation index (PRI), symphysis ischium angle (SIA) and pelvic inclination index (PII) were used to evaluate whether the pelvic radiographs were suitable for radiological assessment.

PA projection instead of AP projection for pelvic radiography has no drawback in terms of acceptability criteria. Considering PA projection is a dose reducing technique requiring no additional equipment, it may be a safer option for children.

The posterior-anterior (PA) projection as a dose reducing technique has been reported in several studies (1-4). Also the British Institute of Radiology suggested PA projection should be obtained in preference to an anterior-posterior (AP) view in order to reduce radiation exposure of gonads (5).

In this study, the aim was to determine whether PA projections meet the radiological criteria of correct positioning as AP projections.

For our prospective study, approval was obtained from the Institutional Review Board. All parents were followed up with a detailed description of the purpose of the research and written consent was obtained. Patients aged 5 years and younger, referred to the Pediatric Orthopedics Outpatient Clinic from May 2018 to April 2019 were included in the study. Exclusion criteria are as follows: patients with hip or knee flexion contracture above 30 degrees (they could cause increased pelvic gradient in both prone and supine positions), patients with known or clinically significant sagittal plan deformity in the spine patients scheduled for surgery (to avoid side confusion during surgery), patients whose parents refused to participate in the study.

If pelvic radiographs were required, it was decided to perform randomly with AP or PA projections. For randomization, the patients who were born on odd days of the month (including 1, 3, and 5) were scheduled to obtain pelvic radiography in the PA projection, while the patients born on even of days (including 2, 4, and 6) were planned to obtain AP projection. Age, gender, diagnosis and treatment recommendations of the patients were recorded. On physical examination, hip flexion contracture was evaluated and the amount was recorded.

The patients were divided into four groups by their age as 6 - 12 months, 1 - 2 years, 2 - 3 years and 3 - 5 years. The number of patients in the groups was determined by power analysis in order to make a proper statistical evaluation. Therefore, 20 patients in each group were found to be sufficient for the study.

In all patients, the radiographs were taken in the standard lying down position. Patients were placed in the supine position on the cassette for AP projection and in the prone position for PA projection. The patients’ legs were held on their knees, with both lower extremities in extension and parallel to each other. The rotation of the lower extremities was adjusted to the knees and the patella parallel to the frontal plan. The patient’s trunk and legs were held in a fixed position during the shooting so that they would remain inactive (Figure 1). Positioning of the patient for PA pelvis radiography

In order to evaluate whether the pelvic radiographs were suitable for radiological evaluation, the criteria of “radiographic indicators of correct positioning” were used defined by Tonnis, Brunken, Ball and Kommenda (5). In order to evaluate the criteria, the rotation and tilt amount of the pelvis were determined. Accordingly, the amount of pelvic rotation was evaluated by the pelvic rotation index (PRI) and pelvic inclination was measured by the symphysis ischium angle (SIA) and pelvic inclination index (PII).

Table 1. Radiological Parameters Used to Evaluate the Amount of Pelvic Rotation and Inclination and Normal Ranges

The Pelvic Rotation Index (PRI): The ratio of the horizontal width of the obturator foramens to each other should be between 1.8 and 0.56 (Figure 2). Statistical tests were performed with IBM SPSS (IBM Statistics for Windows, IBM Corp., released 2011, Armonk, NY). Distribution of the data was analyzed with Kolmogorov-Smirnov test. Spearman’s correlation analysis was used to evaluate the relationship between non-normally distributed variables. For intraclass correlation coefficient, values at 0.5 and below were assumed as poor, 0.5 - 0.75 as moderate, 0.75 - 0.90 as good, and 0.90 and above were assumed to be excellent agreement. The level of signi?cance was set at P < 0.05.

A total of 160 pelvic radiographs were included in the study, 20 for each group, AP and PA projection. The mean age of the patients was 25.52 ± 15.45 (range, 6 - 60) months, and the sex distribution was 98 female and 62 male. The indications for graphs were developmental hip dysplasia in 96 (59.3%) children, pain, disability and various gait problems in 43 (26.9%) children, and Legg Calve Perthes disease, proximal femur deformities, trauma in 22 (13.7%) children. There was statistically excellent agreement in the acceptability of the pelvic radiographs taken from AP and PA projection in all age groups according to “radiographic indicators of correct positioning”.

Table 2. Distribution of Acceptable and Unacceptable Radiographs According to the “Radiographic Indicators of Correct Positioning” in Different Age Groupsa

Radiological imaging methods are widely used in the diagnosis and follow-up of diseases in medicine. Nowadays, despite the fact that magnetic resonance imaging is like radiation-free and high-quality diagnostic tools, conventional X-ray imaging is still widely available due to its advantages such as being easily accessible, fast and inexpensive. However, radiation exposure is the most important cause of avoidance in the use of conventional methods (6). Children are more susceptible to the effects of radiation than adults due to the progressing of organ and tissue development, the small size of the body and the cumulative characteristic of radiation (7, 8). Several studies have been done to reduce radiation exposure by reducing the radiation dose or by using various barriers (9-11). A systematic review and meta-analysis by Karami et al. (12) showed that the rate of using gonad protective barrier was 58% and only 34% of these were correctly positioned. It has been reported that gonad protectors that are not properly positioned may complicate the evaluation of radiography, and therefore, the patient could be exposed to more radiation with repeated graphical shots.

The most effective way to reduce radiation exposure without additional costs is the imaging with optimized projections (1). Chaparian et al. (1) reported a decrease in radiation exposure in PA pelvic graph compared to AP graph of 25% in ovaries, 56% in the colon, 84% in the bladder, 52% in the stomach and uterus, 69% in prostate, and also showed a 60% reduction in the risk of radiation-related cancer.

An ideal graph should help to diagnose, determine the amount of pathology and guide the treatment plan. It is very important that the pelvic radiographs are taken in the convenient position to evaluate the many pathologies of the hip joint in the frontal plane and to perform various radiological measurements.

In our study, developmental hip dysplasia constitutes a large proportion of causes of pelvic radiography (59.3%). The parameters used during the diagnosis and treatment of developmental hip dysplasia, such as acetabular index, sourcil angle, and center-edge angle are significantly affected by the positioning of the graph. For example, an increase in pelvic inclination causes the acetabular index to be measured at a lower level, while its reduction leads to a higher measurement (13). Therefore, before a pelvic radiograph could be used for diagnosis and treatment, it should be evaluated whether the radiograph is convenient or not.

Changing a common practice always involves a number of risks and challenges. The biggest problem that may be encountered during pelvic radiographs is the risk of causing side error. In order not to cause a side fault, the markers indicating the side of the graph should be placed correctly and completely. Informing the radiology technicians about the patient positioning in the PA projection of the pelvis, and making the necessary changes to the pelvic radiograph in the PA projection in the digital hospital information management systems will make this practice easier to enter into daily practice.