Clinical and Imaging Analysis of Primary Tumors of the Clavicle 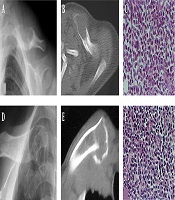 The clinical and imaging presentations of primary tumors and tumor-like lesions in the clavicle are not clear.

To investigate the clinical and imaging presentations of primary tumors and tumor-like lesions in the clavicle for better diagnosis.

Patients with clavicular diseases between 1963 and 2018 confirmed by pathology who had plain radiography, computed tomography (CT) scan and magnetic resonance imaging were enrolled. The age, sex, imaging data, radiological signs and location of the tumor at the clavicle of patients were analyzed and compared.

Eighty-one patients with clavicular diseases were identified including 49 males and 32 females with an age range of 2 - 76 years (mean, 42.6). There were malignant tumors in 50 cases (61.7%), intermediate in 12 (14.8%), and benign in 19 cases (23.5%). Malignant tumors included metastatic tumors in 31 cases (38.3%), plasma-cell myeloma in ten (12.3%), and osteosarcoma in four (4.9%). The intermediate bone tumors were mainly eosinophilic granuloma in six cases (7.4%), and aneurysmal bone cyst in three (3.7%). Benign tumors were mainly osteochondroma (6.2%), bone cyst (3.7%), and chondroma (3.7%). Malignant tumors had bone destruction, periosteal reaction, ill-defined margins and soft tissue masses. Benign tumors and tumor-like lesions had well-defined margins.

Many tumors may occur at the clavicle with more malignant than benign tumors with no specific imaging features in most lesions. A lesion near the sternal end with atypical benign imaging features should be considered as malignant.

Primary tumors and tumor-like lesions are rare in the clavicle which is an unusual bone with development and structures different from other tubular bones in many aspects (1). This bone is the first to ossify in the embryo probably at five months. In the first five years of life, further development happens in the diaphysis from intramembranous ossification, and later, typical endochondral ossification of tubular bone occurs at the sternal and acromial ends. Radiologically, evident epiphyses only appear at the sternal end while no epiphysis center appears at the acromial end. The clavicle interior is occupied by coarse cancellous bone with actually no cavity (2). The clavicle has sparse vascular supply with minimal red marrow surrounded by thick cortices of compact bone. These unusual features in the development and structures may account for the uncommon occurrence of tumors and tumor-like lesions in the clavicle (1, 2). Bone lesions in the clavicle are rare and not common even though every kind of bone lesion which occurs in the skeleton bone has been described in the clavicle. Many clavicular lesions have been reported in the literature despite that most articles are of single case reports or very small number of patients (3-15) even though some larger samples have been reported (1, 2, 16). The great variety of diseases in the clavicle makes radiological diagnosis challenging especially because of limited experience of individual radiologists with these tumors and tumor-like lesions.

This study investigated patients with tumors and lesions resembling tumors in the clavicle over a period of forty years and analyzed the clinical and imaging characteristics of these diseases in order to increase the diagnostic accuracy.

This retrospective study was approved by the ethics committee of our hospital with all the patients given their signed informed consent. Between January 1963 and December 2018, patients with tumors in the clavicle confirmed by pathology were enrolled. Inclusion criteria were patients with clavicle tumors who had radiological examinations including plain radiography, computed tomography (CT) scan and magnetic resonance imaging (MRI). Exclusion criteria were infectious diseases, non-infectious inflammatory diseases, trauma and fracture of the clavicle. Age, sex, radiological signs and location of the tumor at the clavicle of the patients were analyzed and compared. For CT scanning, the Siemens 64-detector scanner (Siemens, Germany) was used with the scanning parameters of slice thickness 5 mm, slice interval 5 mm, tube voltage 120 kV, tube current 260 mA, window width 2000 and window level 500. For MRI scanning, the Siemens symphony 1.5 T scanner was used with the following parameters: T1 weighted image (T1WI): repetition time (TR)/echo time (TE) 690 ms/12 ms, T2WI: TR/TE 5000 ms/60 ms, slice thickness 5mm, slice interval 5 mm, field of view 24 cm × 24 cm, and matrix 256 × 256.

Statistical analysis was performed with the SPSS ver. 24.0 (IBM, Chicago, IL, USA). Enumeration data were presented as number and percentages and tested with Fisher exact probability method, chi-square for paired t-test for significant difference between benign, malignant and intermediate tumors and other data. The significant P was set as < 0.05.

Figure 1. Metastatic tumors. A and B, At the sternal end of the right clavicle, osteolytic bone destruction is revealed with ill-defined margins, pathologic fracture and a soft tissue mass; C, Microscopy of the clavicle in (A) and (B) reveals metastatic adenocarcinoma of the lung with cancer cells forming an adenoid structure surrounded by reactive new bone; D and E, At the middle segment of the left clavicle, osteosclerotic bone destruction is shown with ill-defined margins, apparent periosteal reaction but no soft tissue masses.

Figure 3. A-C, Osteosarcoma; D and E, Ewing’s sarcoma; A and B, An osteolytic destruction is demonstrated at the sternal end of the left clavicle with ill-defined margins, periosteal reaction, a lot of tumorous bone and soft tissue masses; C, Microscopically, the osteosarcoma is composed of tumor cells and tumor-like bone tissue which is produced directly by the tumor cells; D, An osteolytic, expansile destruction lesion is shown at the sternal end of the right clavicle with ill-defined margins, but no periosteal reaction and soft tissue masses; E, Microscopically, the Ewing’s sarcoma is composed of small round cells of the same size and shape, with few cytoplasm and fine nuclear chromatin.
Table 1. Different Clavicular Pathologies and Their Demographic and Anatomical Characteristics

The clavicle was divided into three segments as sternal end, middle segment and acromial end with each segment accounting for 1/3 of the clavicle. The location of the lesion was determined according to the position of the lesion center. More malignant tumors occurred in the sternal end than either the intermediate malignant (P = 0.013) or the benign tumors (P = 0.011) (Table 2). Fifty (61.7%) lesions were located at the sternal end, with 38 malignant tumors (76%) including metastatic tumors in 26 cases, plasma-cell myeloma in six, osteosarcoma in three, lymphoma in two and Ewing’s sarcoma in one. Among 81 cases, plain radiography was performed in 39 cases, of whom CT scan was conducted in 31, and MRI scan in 20 (Table 3). The bone destruction on CT imaging was in line with what was found on plain radiography, and the lesion had equal to low signal on T1WI but high signal on T2WI on MRI.

Table 2. Comparison of Sex and Location of Malignant, Intermediate and Benign Tumorsa

aFisher exact probability test was used. More malignant tumors occurred in the inner area than either the intermediate malignant (P = 0.013) or the benign tumors (P = 0.011). No other significant (P > 0.05) difference existed between any other two features.

Among 22 cases with metastatic tumors (Figure 1), osteolytic destruction occurred in fifteen cases, and mixed destruction in six cases. Expansile destruction took place in fourteen patients, with pathological fracture in four cases. A soft tissue mass occurred in thirteen cases, with apparent sclerosis and periosteal reaction in one patient. In five patients with plasma cell myeloma (Figure 2), the lesion was osteolytic with expansile destruction, ill-defined margins and thinned cortex in three cases. Pathological fracture occurred in three cases with accompanied soft tissue masses. Among four cases with eosinophilic granuloma (Figure 2), three lesions had well-defined margins, but one lesion had ill-defined margins. In three children, the eosinophilic granuloma lesion was expansile with apparent periosteal reaction and bone shell formation. In the remaining two adult patients, the lesion was limited with slight periosteal reaction and no masses in the soft tissue. Malignant tumors had a significantly (P = 0.003) lower incidence in periosteal reaction but a significantly higher incidence in soft tissue mass than intermediate malignant tumors (Table 4).

Table 4. Incidence of Signs in Malignant, Intermediate and Benign Tumors

In this study, the most frequent lesion is malignant tumors in 50 cases (61.7%) including primarily metastatic tumor, plasma-cell tumor and osteosarcoma accounting for 38.3%, 12.3% and 4.9%, respectively. Fibrous dysplasia and giant cell tumor which are common in other body parts are rare in the clavicle accounting for only 1.2% and 2.5%, respectively, which is probably related to the flat bone of the clavicle. Based on the unpublished data in our hospital over 45 years, the tubular long bones are predominated by benign lesions while most flat and irregular bones like ribs, ilium and sacrum mainly have malignant tumors. The incidence of metastatic tumors and myeloma in the clavicle is similar to that in the ribs, probably in relation to the tissue and anatomical features of the clavicle which is actually a flat bone. All kinds of lesions which tend to occur in flat bones may take place in the clavicle, whereas fibrous dysplasia, giant cell tumors and chondroblastoma which tend to occur in long tubular bones are rare in the clavicle (1-4, 6, 7, 9-12, 14-16). In a study investigating the histopathology, anatomy and epidemiology of bone tumors of the clavicle in 113 patients with a mean age of 40 years (18), 22 benign, 31 intermediate and 60 malignant tumors were found, with eosinophilic granuloma as the most common neoplasm (18.6%), followed by bone metastases (15.0%), plasma cell myeloma (8.8%), Ewing’s sarcoma (8.8%) and osteosarcoma (8.0%). In this study, 53% of the tumors were malignant, with a mean age of 51 years in patients with malignant tumors and 28 years in patients with a benign/ intermediate lesion (P < 0.001).

In our study, the metastatic tumors occurred mostly in patients over 50 years of age. The age was older compared to other bone metastases. These tumors mostly had expansile osteolytic destruction with discontinuation of the cortex and soft tissue masses (8). CT displayed lytic bone destruction with ill-defined margins, a soft tissue mass, discontinued cortex and a primary tumor. In some cases with osteosclerotic metastasis, the lesion had apparent osteosclerosis, bone destruction and a lot of periosteal reaction, similar to osteosarcoma (Figure 1).

Eosinophilic granuloma is not frequently found in the clavicle; however, it has been described in detail in the literature (4, 7, 12, 15). The lesion most commonly occurs in children less than 10 years, but it also occurs in much older patients (1). The lesion has well defined margins, homogeneous density inside the lesion, apparent periosteal reaction in children and sclerotic rims. The lesion is usually adjacent to normal bone tissue with no soft tissue masses (Figure 2). Combination of the age of onset and imaging features can readily lead to the correct diagnosis in children rather than in adults because of no imaging specificity.

In our study, these patients were mostly more than 50 years and the lesion was lytic expansile bone destruction with ill-defined margins, thinned cortex and concurrent pathological fracture at the sternal end (Figure 2). It is difficult to differentiate it from metastatic tumors. Medullary biopsy and IgM detection in blood or urine may be helpful for diagnosis.

The prevalence of Ewing’s sarcoma in our study was between 10 and 20 years, consistent with the age of onset for this sarcoma (20, 21). The imaging presentations in one such patient was expansile bone destruction with thinned discontinued cortex, ill-defined margins but no soft tissue masses (Figure 3). These imaging features are not specific for Ewing’s sarcoma and may present difficulty in diagnosis.

In conclusion, many tumors and tumor-like lesions may occur at the clavicle with more malignant than benign tumors with no specific imaging features in most lesions, and a lesion near the sternal end with atypical benign imaging features should be considered as malignant.