An Alternative Loop Snare Technique with Many Loops Using a Simple Guide-Wire for Removal of a Double J Stent: A Case Series 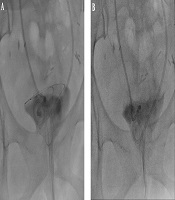 Removal of a double J (DJ) stent has been conventionally performed with conventional snare wires, tissue forceps, or stone baskets under fluoroscopic guidance. However, if the lumen is collapsed, is very wide, or if the tip of the DJ stent is lodged in the bladder wall, the procedure becomes difficult.

We retrospectively reviewed four patients who had undergone retrieval or replacement of their DJ stents by interventional radiologists with an alternative loop snare technique using a guide-wire after conventional attempts using a snare catheter had failed.

Five DJ stents were completely removed without any complications.

The loop snare technique using a guide-wire could be an alternative and inexpensive approach for difficult DJ stent removal.

The placement of a double J (DJ) ureteral stent is usually performed by a urologist through the bladder via cystoscopy. However, if bladder access is difficult or the urethral stricture is severe, placement may be carried out using a percutaneous renal nephrostomy (PCN). The removal and exchange of DJ stents are also typically performed using a retrograde approach, but retrieval procedures become difficult when DJ stents have migrated to the renal pelvis or become lodged in the bladder wall. In these cases, patients are referred to an interventional radiologist and removal of the DJ stent is attempted under fluoroscopic guidance with conventional snare wires, tissue forceps, or stone baskets (1). However, if the lumen has collapsed, is very wide, or if the tip of the DJ stent is lodged in the bladder wall, there is a limit to the amount of time that could be spent handling these devices. In addition, tissue forceps and stone baskets could cause physical damage to the bladder wall. If the use of any one device is difficult, various other devices may be tried, which could increase the cost of the procedure.

This retrospective study was approved by our Institutional Review Board. Between 2017 and 2018, 17 patients were referred to interventional radiology for exchange or removal of the DJ stent. DJ stents were successfully removed using a conventional technique in 13 patients. Four patients underwent retrieval or change of the DJ stent with an alternative loop snare technique by an interventional radiologist using a guide-wire. A patient underwent the same procedure twice. There were two males and two females, with an age range from 43 to 57 years (mean: 48.6 years) (Table 1).

All procedures were performed with patients under moderate sedation by two certified attending interventional radiologists with 7 years and 21 years of experience, respectively.

After determining the best route, an 8-Fr. introducer sheath (Radiofocus, Terumo Corp., Tokyo, Japan) was inserted over the 0.035-inch guide-wire. Then a 6-Fr conventional snare catheter (Multi-Snare® set, pfm medical ag, Koln, Germany) with a loop diameter of 20 mm was inserted into the introducer sheath. The loop of the snare catheter was then advanced between the tip and the wall. If it failed to capture the tip despite several attempts, the procedure was changed to the alternative loop snare technique.

The alternative loop snare was fabricated using a 0.018-inch, 180-cm long hydrophilic guide-wire (Radiofocus, Terumo Corp., Tokyo, Japan). The end of the guide-wire was bent to the length of the sheath and inserted into the introducer sheath with the bent end first. The reason for bending as much as the length of the sheath is that if the short string is held, the bent end does not exit the sheath. By advancing the guide-wire loop to the introducer sheath tip, the short string could be fixed with one hand, which allowed for the radiologist to push the long string of the wire slightly. The reason for this motion is to prevent tissue damage when the bent section is sharp. If the radiologist continues to push the long string part, multiple loops will be created in the lumen. Due to the elasticity of the guide-wire, these loops are formed along the wall of the lumen. Even if the tip of the DJ stent is lodged in the lumen, the loop could still be inserted between the DJ stent tip and the wall. If the tip of the DJ stent is expected to come into one of the multiple loops, the operator could pull both the short string and the long string at the same time and check if the DJ stent is caught. If not, another attempt should be made to push the long string and the short string at the same time. If the DJ stent is caught, the radiologist should pull the wire and guide the DJ stent into the sheath to remove it. These steps are demonstrated using a flask and a straw (Figure 1) to represent the lumen and the sheath. 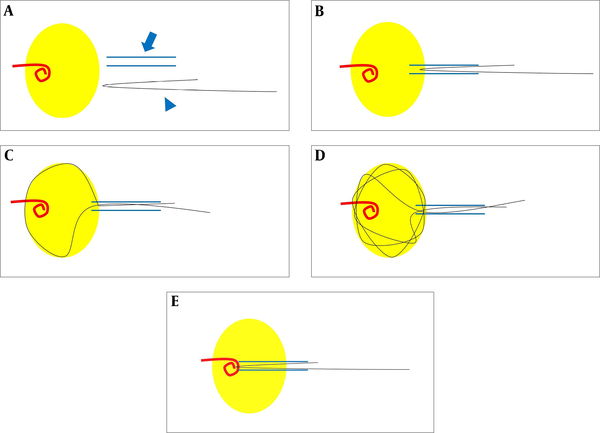 Figure 1. A, Prepare the introducer sheath (blue arrow) and a 0.018-inch guide-wire (blue arrowhead). Bend the end of the guide-wire as much as the sheath length. The yellow circle represents the lumen, such as a bladder or a renal pelvis; B, Insert the introducer sheath in the lumen and push the bent end of the guide-wire through the sheath; C, Create a loop by pushing the long string. The short string should be held to prevent the folded end from entering the lumen; D, When the long string is inserted continuously, the loop touches the lumen wall, and multiple loops are created due to the elasticity of the guide-wire; E, If a foreign body enters the loops, pull the short string and the long string simultaneously and guide both strings into the sheath. Finally, remove the foreign body along with the sheath.

The overall success rate for retrieval of the DJ stent in this study was 100% (5/5). The tips of three DJ stents were placed in the renal pelvis, while the tips of two stents were located in the bladder (Figure 2).

Figure 2. A 53-year-old woman had two DJ stents due to ovarian cancer with bladder metastasis. The patient was referred to our department to replace the DJ stents, which were functioning poorly. A, After the conventional technique using a snare catheter failed, an 8-Fr introducer sheath was inserted through the urethra into the bladder. Then, a bent, 0.018-inch guide-wire was inserted through the sheath. Multiple loops were made by pushing the long string; B, When the DJ stent entered one of the loops, the short and long strings were pulled out simultaneously to introduce both strings into the sheath.

All DJ stents were examined after retrieval and were removed in their entire length without any evidence of component disruption. All DJ stents were 7-Fr ureteral stents (Percuflex®; Boston Scientific, Natick, MA). The total procedure time ranged from 20 to 43 minutes. The elapsed time for the conventional technique ranged from 16 to 32 minutes, while the total operative time for the alternative loop snare technique ranged from 4 to 11 minutes. Additional commercially available retrieving devices or procedures were not required. There were no significant complications related to these procedures. Follow-up plain films showed appropriate stent placement in all patients.

When a DJ stent is removed, the advantage of an alternative loop snare technique, compared to existing techniques, is that the loop can easily advance between the wall and the tip of the stent, which facilitates capture. Another advantage is that this technique uses only introducer sheaths and a 0.018 inch-guide-wire. As a result, this technique is cost effective because no additional device is needed. This approach also caused no damage to the surrounding tissues in any of our five procedures because it used a soft guide-wire to make the loop. No complications occurred in any patients.

Previous studies have shown that intravascular foreign bodies can successfully be removed using a self-made snare catheter (4, 5). The alternative loop snare technique using a guide-wire creates many loops, and the loop size is expanded to the maximum size in accordance with the lumen space, making it easy to ensnare the tip of the DJ stent. One disadvantage of this study is that there are only a few procedures that have led to a small sample size. However, this technique is very easy to reproduce and could be applied in any situation.

In conclusion, the loop snare technique using a guide-wire can be an alternative, relatively safe, inexpensive, and effective approach for removing foreign bodies that are difficult to retrieve with conventional methods.