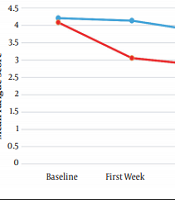 Cancer-related fatigue (CRF) during chemotherapy and after it and decreased body energy are common problems in patients that do not resolve with sleep and rest.

This study aimed to assess the effect of combination therapy of low-intensity exercise and slow stroke back massage (SSBM) on physical activity and fatigue intensity of patients undergoing chemotherapy.

Cancer is an important public health problem (1). According to statistics published by global burden disease (GBD) study on assessment and health in 2018, the incidence of cancer has increased by 28% in 195 countries between 2006 and 2016 (2).

Chemotherapy is the use of cytotoxic drugs to treat cancer (3). Chemotherapy treatments have several side effects, such as nausea, vomiting, hair loss, pain, fatigue, etc., which reduce the patient's quality of life (4). Cancer-related fatigue (CRF) is one of the most common debilitating symptoms (5-7)and an unusual multidimensional physical, mental, psychological, and cognitive phenomenon (5, 6), which is different from the fatigue experienced before cancer (8) and is manifested in the form of lack of physical energy or mental energy perceived by the patient (9).

Strong and consistent evidence suggests that non-pharmacological interventions are effective for fatigue (10), and these methods or complementary therapies that have relatively fewer risks can be used in addition to the drugs (5, 6). “Exercise” is a regular structured program of physical activity, where “physical activity” is defined as an activity in daily life that may be categorized as occupational, sports, conditioning, household, or other (11). Global guidelines recommend accumulating 150 min of moderate-to-vigorous intensity physical activity (MVPA) per week to maintain health and prevent or delay the onset of chronic disease (12).

Low-intensity exercise includes repetitive exercises and accounts for about 50 - 60% of maximum heart rate (MHR) (13). Massage therapy as alternative and complementary medicine has been used throughout history, both as a sedative and as a treatment (14). SSBM is a specific and successful nursing protocol that has been used in nursing (15) as non-invasive and applied on the surface of the body, so does not have complications such as bleeding or infection (16) and reduces anxiety, fatigue and promoting relaxation and sleep (15, 17).

There is evidence that exercise and massage can be beneficial when tested as separate interventions, and massage is effective as a psychological resource and a recovery method after exercise (18, 19) and have beneficial effects on varying conditions (20); however, the evidence is weak to support exercise as being effective at improving survival outcomes for any cancer cohort (21). Given that most of their research focused on CRF and limited evidence in determining physical activity, the present study aimed to determine the effectiveness of combined low-intensity exercise and SSBM on physical activity and fatigue intensity in all patients with cancer undergoing chemotherapy.

This clinical trial study included the combined intervention of low-intensity exercise and SSBM that was approved by the Medical Ethics Committee (IR.AJUMS.REC.1397.619) and IRCT code (IRCT20171203037737N4) of Jundishapur University of Medical Sciences, Ahvaz, Iran. It was performed on 92 patients with different types of cancer undergoing chemotherapy who were referred to the oncology wards of Shahid Baghaiee-2 hospital between 2018 and 2020 in Ahvaz, Iran. They entered the study according to the inclusion criteria. The samples were randomly selected using randomized blocks with a block size of 4 by a person who was blind to the study objectives. To this end, corresponding codes in sealed envelopes were assigned to the intervention and control groups (Figure 1). 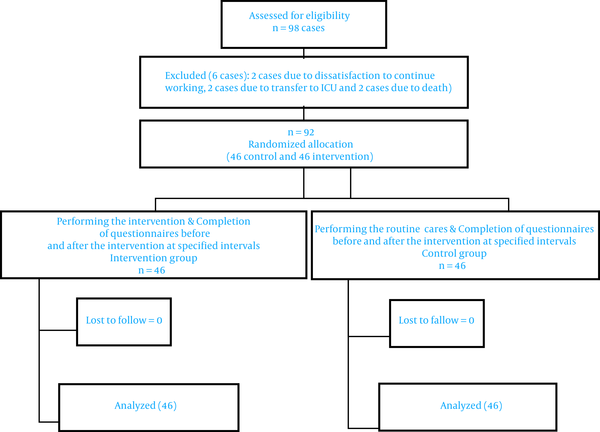 Inclusion criteria were the patients aged 18 - 65 years, men and women with various types of cancer (22) undergoing routine periodic chemotherapy, the absence of skeletal and muscular problems and anomalies, lack of a history of cardiovascular diseases (23), lack of exercise during the study period (22, 24), spending at least one course of chemotherapy for each patient before the study (22, 25), ability to perform the basic and daily activities (26), total white blood cell (WBC) count of above 3,000 in each session of complete blood count, the platelet count of above 50,000, and hemoglobin level of above 8g/dL (27), normal vital signs in each period, the lack of chemotherapy and radiotherapy at the same time, patients residing in Ahvaz and its suburbs. Exclusion criteria were transferring the patient to the ICU ward and holding the chemotherapy, transferring the patient to another treatment center to continue treatment, and the patient's death.

- International Physical Activity Questionnaire (IPAQ): Is the standard self-reporting tool that short form (IPAQ-SF) with seven questions that quantifies physical activity during the last seven days (31). The validity and reliability of IPAQ has been confirmed in many studies (12, 28). Validity and reliability in all adults around the world and its correlation coefficient are between 0.77 and 0.95 (32).

The intervention lasted four weeks with three sessions per week. Each session took 25 minutes which included low-intensity exercise and SSBM. The demographic characteristics and their vital signs and final CBC diff test results were checked as pretest for both group. At the baseline (week zero) and on the third day of each week, the fatigue and physical activity intensity were measured with the mentioned tools after receiving guidance and explanations.

The SSBM was performed in the form of superficial strokes and slow, gentle palm movements on the patient's back by researcher and her co-worker. The palms touch the back of the patient at a steady speed of about 60 movements per minute for 10 minutes (16). Exercise was performed by the researcher under the supervision of a physiotherapist. Active, isometric, and stretching movements conducted as follows: (1) knee to chest, (2) double knee to chest, (3) cervical spine extension, (4) isometric with towel roll, (5) gluteal sets, (6) quadriceps, (7) ankle pump, (8) straight leg raise (SLR), (9) supine bicycling (24), and finally, (10) walking for 15 minutes.

Data were analyzed with SPSS ver. 22 and chi-square test (or Fisher's exact test), independent t-test, and repeated measures ANOVA. A P-value of less than 0.05 was considered statistically significant.

Table 1. Comparison of Fatigue Severity in the Intervention and Control Groups in Patients Undergoing Chemotherapy

Table 2. Comparison of Physical Activity in the Intervention and Control Groups in Patients Undergoing Chemotherapy

Shariati et al. (2010) showed the mean fatigue intensity in the weeks after and before exercise in patients with colorectal cancer was significantly different (33). Adamsen et al. (2009) suggested a supervised multimodal (high- and low-intensity) exercise in patients with various cancers undergoing chemotherapy that make a reduction in fatigue and increase in physical activity and functional activity, and emotional wellbeing, but not quality of life (22). Andersen et al. (2013) showed six-week supervised multimodal exercise could lead to a significant reduction in self-reported CRF in cancer patients undergoing chemotherapy (25).

These findings are in agreement with the National Comprehensive Cancer Network guidelines on treating CRF, which note that exercise is one of the most effective non-pharmacological treatments for CRF (34). Embedding of exercise programs in the current oncologic rehabilitation guidelines is, however, still not standard. Our results clearly indicate that this should be considered.

Dashtbozorgi et al. (2012) found that stroke massage in patients with breast cancer was cost-effective and readily available and reduced anxiety and depression. However, it is not effective in reducing nausea and vomiting (35). Karagozoglu and Kahve (2013) found that back massage reduced anxiety in patients undergoing chemotherapy, but the reduction was not significant, while fatigue was significantly reduced (17). Miladinia et al. (2015) showed that SSBM, as a safe and easy method, might be useful in controlling Chemotherapy-induced nausea and vomiting (CINV) in pediatrics with acute leukemia besides the routing cancer care (16).

Lin et al. (2014) showed that supervised exercise is more effective than routine care in improving the physical activity level and functional role, and pain scales (28). Moghaddam Tabrizi et al. (2017) also demonstrated that energy storage strategies (decreased activity and increased rest) as an effective, easy, and low-cost method had a statistically significant effect on cancer-related fatigue in patients with breast cancer (19). Therefore, it is suggested that further studies should be carried out, especially on physical activity and massage in the cancer community, to better determine the effects of these therapies together.

Because of illiteracy and physical weakness, and fatigue after chemotherapy, patients, after discharging, did not eager to come back to the hospital for intervention, especially exercise. Patients did not show much desire to fill PFS due to weakness, fatigue, and impatience. It is recommended to use a shorter and friendlier questionnaire in future studies.

The nurses are well-placed to regularly encourage patients to participate in physical activity and to refer patients to exercise professionals and massage during and following their cancer treatment, and use evidence-based interventions. It is recommended that this study be performed on patients undergoing chemotherapy for certain cancers or common cancers or at specific stages or for a limited period, such as during or after hospitalization, just because of controlling confounding variables.

This article is the result of the research thesis of Maryam Fazeli, MSc. student of medical-surgical nursing, with the research code (NCRCCD-9723), and was done with the financial support of Jundishapur University of Medical Sciences, Ahvaz, Iran.

Copyright © 2021, Jundishapur Journal of Chronic Disease Care. This is an open-access article distributed under the terms of the Creative Commons Attribution-NonCommercial 4.0 International License (http://creativecommons.org/licenses/by-nc/4.0/) which permits copy and redistribute the material just in noncommercial usages, provided the original work is properly cited.
download pdf 422.96 KB Get Permission (article level) Import into EndNote Import into BibTex
Number of Comments: 0