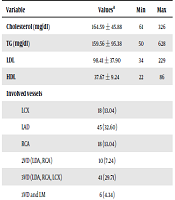 Despite significant improvements in diagnosis and treatment, non-ST-Elevation Myocardial Infarction (NSTEMI) is still one of the health problems in developed and developing countries.

The present study was performed to assess the electrocardiographic changes and coronary findings in patients with NSTEMI.

The study enrolled 158 patients with NSTEMI diagnosis at the discharge time. Demographic characteristics and electrocardiographic changes were collected using a checklist from the medical records of the patients. The angiography data were used to calculate a syntax score for each patient. Finally, patients were divided into three groups based on this score: high risk >32, intermediate risk 22-32, and low risk < 22. Involved vessels, including the left anterior descending artery, Right Coronary Artery (RCA), Left Circumflex Artery (LCX), and the left main stem, were also determined.

The mean age of the patients was 60.68 ± 12.15 years. The LAD, LCX, and RCA were the most common involved vessels, in sequence. About 27.73, 67.15, and 5.12% of the patients were assigned to low, moderate, and high-risk groups, respectively. Statistically significant differences were observed in the frequencies of ECG changes (P = 0.003) and types of involved vessels (P < 0.001) between low, moderate, and high-risk patients. In addition, there were statistically significant differences in the mean syntax scores between different types of involved vessels (P < 0.001).

The findings of the present study showed a significant relationship between the types of vessel involvement and syntax score. Also, there was a high prevalence of ST changes in precordial leads that may improve the sensitivity of diagnosis. We did not find any significant relationship between the frequencies of ECG changes based on the types of involved vessels.

Cardiovascular diseases are the most common causes of mortality worldwide. They account for about 138,000 deaths annually in Iran, about half of which are heart attacks (1). According to the Iran Ministry of Health, cardiovascular disease mortality increased in the past decade, accounting for about 46% of all deaths in Iran (2). There are two major types of ischemic heart diseases, including stable angina and Acute Coronary Syndrome (ACS). The ACS is divided into unstable angina, acute ST-elevation myocardial infarction (STEMI), and acute non-ST-elevation myocardial infarction (NSTEMI). There are two main groups of risk factors for cardiovascular diseases: Modifiable (e.g., obesity, smoking, diabetes, hypertension, hyperlipidemia, and oral contraceptive use) and unmodifiable (sex, family history, and race) (3). For instance, diabetes can increase the risk of cardiovascular diseases (4). Obesity increases the levels of glucose, triglyceride (5), low-density lipoprotein (LDL), and heart rate, which can lead to metabolic and cardiovascular diseases.

The SYNTAX (Synergy Between Percutaneous Coronary Intervention with Taxus and Cardiac Surgery) score is a grading system to evaluate the complexity and prognosis of patients undergoing percutaneous coronary intervention (6). It is a tool to select revascularization strategies and is obtained based on 11 angiography variables that consider the location and properties of lesions. The study of ST changes in ECG can be used to improve the sensitivity of diagnosis.

Only in the United States, about one million patients are hospitalized because of acute myocardial infarction (7). Acute Myocardial Infarction (AMI), also known as heart attack, is caused by narrowing or occlusion of a coronary artery as a result of a sudden and sustained lack of blood flow to the heart tissue (1). As known, AMI is one of the most important medical emergencies imposing a high financial burden on health care systems and patients' families. The prognosis of AMI is not good, and despite the increasing survival rate in the last decade, the median survival rate has not changed (about three years after diagnosis) (8). Thus, AMI is the most common cause of disability and mortality (9), although the mortality is declining due to the reduced incidence of the disease and progressions in diagnosis and treatment. Although the short-term mortality of STEMI patients receiving fibrinolytic treatment has been reported to be 6.5 to 7.5% in randomized studies, clinical and descriptive studies have shown that it is about 15 to 20% (10).

Although MI used to occur more often in the elderly, the incidence currently is more prevalent among young people (8, 11). The mortality is about 30%, and almost half of the deaths occur in the first hour when the patient has not yet been admitted to the hospital. Cardiovascular mortality is increasing, and by 2030, it will remain among the three main causes of the global burden of disease (12).

The NSTEMI is defined by an elevation of cardiac biomarkers in the absence of ST elevation. Despite significant improvements in diagnosis and treatment, NSTEMI is still one of the health problems in developed and developing countries (10, 13). The NSTEMI patients are usually older and sicker, with higher risks of adverse events such as cardiogenic shock when compared to STEMI patients (14). Furthermore, these patients have left ventricular dysfunction, renal failure, complex and extensive anatomic coronary disease, older age, and greater risk of developing or presenting with cardiogenic shock (15); thus, there remains a considerable variation in the treatment management of NSTEMI patients (14). Therefore, NSTEMI patients are a high-risk population. Up to half of the NSTEMI patients do not exhibit chest pain, compared to about one-fourth of STEMI patients. The lack of chest pain increases the diagnostic time of patients (15). One study showed that, Among patients with NSTEMI, only 53% of patients had definite ECG ischemic abnormalities. However, it could be due to the fact that only patients with single- vessel CAD were evaluated in this study, while a large percentage of patients with NSTEMI have multivessel CAD. This low percentage could also be explained by the relatively low troponin level that used for inclusion in the stud (16). Early detection and appropriate management of myocardial infarction are imperative to improving patient outcomes (17).

Due to the poor prognosis of NSTEMI, the presence of typical comorbidities and associated causes, the old age of most patients, and the complexity of treatment decisions, on the one hand, and the lack of studies in this field and the criticality of coronary artery problems, on the other hand, we decided to measure and evaluate electrocardiographic changes and coronary artery findings in patients with NSTEMI to prevent re-hospitalization and reMI of these patients. The data from this study would lead to accelerated diagnosis and treatment and increased prognosis in the patients.

The study sample was selected from MI patients admitted to Heshmat hospital during the first six months of 2018. The sample size was 158 patients. To comply with the ethical considerations of research, written informed consent was obtained from all participants. All ECGs obtained during the index hospitalization, as well as previous ECGs (when available for comparison), were interpreted by a single experienced electrocardiography interpreter (WSA) who was blinded to patient history, angiographic findings, and previous ECG interpretation. Data were obtained from the medical records of the patients. The ECG criteria for non-ST elevation acute myocardial infarction was defined by the presence of ischemic chest pain lasting more than five minutes and positive troponin-I level (defined in our clinical laboratory as > 0.01 ng/mL) without any evidence of ST-segment elevation on 12-lead electrocardiogram (16, 18).

In this study, the inclusion criteria were having a diagnosis of non-ST elevation acute myocardial infarction and age of 18 years or above in both genders. Also, the exclusion criteria were patients with ST-elevation ACS, patients with paced electrical rhythm ACS, patients who were intubated or died, and those whose medical records were incomplete/illegible. Besides, we obtained demographic and medical characteristics, including age, sex, smoking, history of hypertension, diabetes, family history of coronary diseases, and lipid profile (cholesterol, TG, LDL-C, and HDL-C). The lipid profile was measured at the time of referral to the hospital. Quantitative coronary angiography was performed using the Judkins technique by two experienced interventional cardiologists unaware of the clinical and laboratory results of the patients. Significant CAD was defined as >50% stenosis in at least one coronary artery. Each coronary lesion producing a ≥ 50% luminal obstruction in vessels ≥ 1.5 mm was separately scored and added to provide the vessel syntax score. Also, the angiography data were used to calculate a syntax score for each patient. According to the syntax score, the patients were assigned into three groups: high-risk group (syntax score > 32), intermediate-risk group (syntax score of 22 to 32), and low-risk group (syntax score < 22). Involved vessels, including the left anterior descending artery, Right Coronary Artery (RCA), Left Circumflex Artery (LCX), and the left main stem, were also determined (6, 18, 19). This study was approved by the Ethics Committee of Guilan University of Medical Sciences (no.IR.GUMS.REC.1397.388). All necessary permissions were obtained from the relevant authorities before beginning the study.

Data analysis was performed using SPSS version 16 software. Data were presented as frequency, percentage, and mean ± SD. The normality of quantitative variables was assessed using the Kolmogorov-Smirnov test. Variables that did not have a normal distribution were presented as median and Interquartile Range (IQR). The one-way ANOVA test was used to compare the mean syntax scores based on involved vessels and electrocardiographic changes. The relationship between qualitative variables was assessed using the chi-square test, Fisher exact test, or Kruskal-Wallis test, where applicable. A p-value of less than 0.05 was considered statistically significant.

Table 2. Lipid Profile and Involved Vessels in the Studied Patients

Table 3 shows the frequencies of ECG changes in patients with different severities of vessel involvement. The ST change in leads I and AvL had the lowest frequencies (4.5%).

Table 4. Frequencies of the Types of Involved Vessels in Patients with Different Severities of Vessel Involvement (Syntax Score)

As mentioned, many heart diseases cannot be diagnosed with ECG. Typically, 50% of patients with UA and NSTEMI do not have any ECG changes at the time of cardiac emergencies. Therefore, the correct choice of any diagnostic tool for any heart disease is an important responsibility of the physician.

The SYNTAX Score is a method of ranking the severity of coronary arteries and a tool for determining the prognosis of patients who are candidates for renovascular surgery, especially Percutaneous Coronary Intervention (PCI). The scores are given based on 11 angiographic variables by considering the location and characteristics of the lesion. This scoring system is an effective tool for classifying patients with complex coronary arteries for treatment with PCI and pharmacotherapy or GABG. Therefore, the sensitivity of diagnosis can be affected by examining the prevalence of ST changes in electrocardiography. Making correct and rapid decisions in the emergency room is important to save the lives of these patients. In patients undergoing coronary angiography, the SYNTAX scoring criterion is of acceptable value. Therefore, in a prospective cohort study, it is proposed to use it as a method to determine the diagnostic-therapeutic strategy.

One of the limitations of this study is the illegibility and shortcomings in the files and laboratory documents of patients, as well as the lack of cooperation of some patients to perform laboratory tests. Incomplete files were excluded from the study.

The findings of the present study showed a significant relationship between the types of vessel involvement and the syntax score. Patients with stenosis in three coronaries had a syntax score >32. In addition, the ST changes in V1 to V6 leads was >32 in 50% of the studied patients. This high prevalence of ST changes in precordial leads may improve the sensitivity of diagnosis. We did not find a significant relationship between the frequencies of ECG changes based on the types of involved vessels. However, 3VD and LM showed the highest changes in V1-V6 leads and T-invert.

The authors would like to appreciate The Vice-Chancellor for Research and Technology of the Guilan University, the head, and staff of Dr. Heshmat hospital, and all patients who voluntarily participated in this study.

Copyright © 2020, Jundishapur Journal of Chronic Disease Care. This is an open-access article distributed under the terms of the Creative Commons Attribution-NonCommercial 4.0 International License (http://creativecommons.org/licenses/by-nc/4.0/) which permits copy and redistribute the material just in noncommercial usages, provided the original work is properly cited.
download pdf 128.88 KB Abstract XML Get Permission (article level) Import into EndNote Import into BibTex
Number of Comments: 0