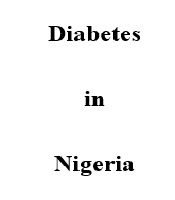 Diabetes: A Silent Killer in Nigeria

The World Health Organization (WHO) stated that the prevalence of diabetes rose faster in low and middle-income countries over the past decade. Several years ago, South Africa and Ethiopia were said to have more diabetes cases than Nigeria. However, currently, Nigeria has the highest incidence of diabetes in sub-Saharan Africa. The WHO estimated a 4.3% prevalence of diabetes in Nigeria in 2016 (1) Some local studies conducted in Nigeria found a prevalence between 0.8% and 11% (2). A previous study reported that about 4.7 million Nigerians had type 2 diabetes (3).

Type 2 diabetes mellitus (T2DM) is predominant among diabetes mellitus patients in Nigeria, accounting for more than 90% of the total cases (4, 5). It was estimated that diabetes killed more than 40,000 Nigerians in 2015, and such a huge loss is due to the lack of efficient and effective healthcare delivery. There are millions of Nigerians who are diabetic but are yet to be diagnosed and treated. The International Diabetes Federation (IDF) estimated that about two-thirds of people with diabetes in Africa are undiagnosed. The complications of diabetes are very serious, including stroke, heart attack, kidney failure, blindness, etc. The WHO predicts diabetes to become the seventh leading cause of death in the world by the year 2030 (6).

In 2015, diabetes was the sixth leading cause of death in lower-middle-income countries. The WHO reported that most of the sub-Saharan African countries do not have a diabetes registry as of 2015, only 17.0% of them had diabetes registry. The WHO calls upon governments to help and ensure that people are properly diagnosed as most of the cases in Africa are undiagnosed. People should be able to make healthy choices, eat healthily, and be physically active.

Copyright © 2020, Jundishapur Journal of Chronic Disease Care. This is an open-access article distributed under the terms of the Creative Commons Attribution-NonCommercial 4.0 International License (http://creativecommons.org/licenses/by-nc/4.0/) which permits copy and redistribute the material just in noncommercial usages, provided the original work is properly cited.
download pdf 80.10 KB Abstract XML Get Permission (article level) Import into EndNote Import into BibTex
Number of Comments: 0