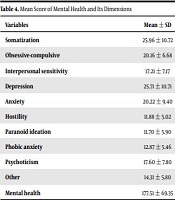 Psoriasis is a relatively common inflammatory skin disease characterized by red, scaly plaques in different parts of the body. Although the etiology of the disease is not fully understood, psychological stress is mentioned as a potential factor in developing the disease.

In this study, in response to the lack of sufficient information obtained from assessing the influence of psoriasis on mental health, an attempt has been made to evaluate the prevalence of mental health problems in a sample of patients with psoriasis.

This study was conducted following an applied, descriptive-correlational study design. A total of 104 patients with psoriasis were selected using the census sampling method. Data were collected using the standardized Symptom Checklist-90 (SCL-90) questionnaire. This self-administering questionnaire contains 90 items. The reliability and validity of the questionnaire were confirmed.

Although in the present study, psychiatric disorders in patients with psoriasis were moderate, psychological counseling and psychiatric consultation are key to reduce the consequences of the disease and its progression.

Psoriasis, which is known as a psychosomatic disorder, is an inflammatory skin disease characterized by red, scaly plaques in different parts of the body, impacting about 2% of the population (1, 2). Its prevalence ranges from 1.3 to 2.5% in Iran (3). Psoriasis may begin at any age (4).

In the United States, about 2 - 2.6% of the population suffers from psoriasis, and its annual incidence ranges from 150 to 260,000 cases (5). Chronic, incurable disease such as psoriasis causes several problems. Patients with psoriasis may avoid public places, may experience problems with interpersonal communication due to changes in appearance-related concerns (6), and even, 2.4 - 9.7% of these patients mentioned having suicidal thoughts (2). Several studies reported an association between appearance or exacerbation of symptoms with psychological factors (7). So psoriasis can be maintained or exacerbated by a psychiatric condition within a vicious cycle. In other words, psychiatric conditions like anxiety symptoms worsen skin diseases (8).

On the other hand, the psychosomatic origin of the disease has also been emphasized and stressors are referred to as the most important factors that initiate or intensify the disease process (8). Also, some studies found therapeutic methods based on psychological principles caused significant improvements in clinical manifestations of psoriasis during 6 weeks after starting the treatment, and this improvement has continued for up to 6 months after applying the treatment (9).

In the present era, mental health is regarded as one of the most important indicators of a society's health and has been deeply considered by psychiatrists, psychologists, and other scientists in behavioral and social sciences. Mental health means that an individual realizes his/her daily activities well, can properly communicate with family members and the environment, and behave appropriately according to the norms of the culture and society. In other words, it can be argued that mental health is the knowledge and the art to help people to adapt to their environment psychologically and emotionally and choosing more optimal solutions to their problems by developing the right methods because, if the psychological pressures constantly threaten an individual, s/he won't be able to be cheerful, strong, and capable of fulfilling his/her social responsibilities (10).

A study conducted in Brazil by Marco et al. reported a strong association between psoriasis and different dimensions of mental health (11). Another study found that patients with psoriasis have a high risk of depression, anxiety, and suicide (12).

Despite the high prevalence of psoriasis, especially in Iran, there has been no accurate assessment of the disease or the association between mental health and its consequences in our society. Therefore, in this study, an attempt has been made to evaluate the prevalence of mental health problems in a sample of patients with psoriasis, which can provide better information for the clinical management of the disease.

Following an applied, descriptive-correlational study design, this study was conducted on all patients with psoriasis referred to the rheumatology clinic of Golestan Hospital in Ahvaz in the first half of 1398. After obtaining approval from the ethics committee of Ahwaz Jundishapur University of Medical Sciences (AJUMS) (No IR.JUMS.REC.1397.936), the researcher referred to the study site (the rheumatology clinic of Golestan Hospital in Ahvaz). A total of 104 patients with psoriasis were identified and all of them were included in the study using a census sampling method. The inclusion criteria were a definitive diagnosis of psoriasis by a dermatologist and willingness to participate in the study. The exclusion criteria included having a history of neurological disease, suffering from severe cognitive impairment, using psychiatric medications during the study, addiction to any drugs; patients with uncontrolled chronic diseases such as diabetes, hypertension, and heart disease; and unwillingness to participate.

After obtaining written informed consent from all participants, they were provided with the standardized Symptom Checklist-90 (SCL90) questionnaire [Derogatis et al. (1973)]. The questionnaire is revised based on clinical experiences and psychometric analyses (in 1976). If they requested further information, the researcher provided them all the necessary information about the objectives of the study. Of 114 questionnaires distributed, 104 responded for a response rate of 91%.

A study by Mirzaei (1980) has standardized the SCL90 in Iran. Derogotis (1976) evaluated the internal consistency of this test. The highest and lowest correlation coefficients were associated with depression (0.95) and psychoticism (0.77), respectively. To evaluate the reliability of the questionnaire, a pilot study was conducted on 94 patients with mental health problems using the test-retest method. The correlation coefficients ranged from 0.78 to 0.90 after one week of administration. Regarding the validity of the test, the highest and lowest reported correlations are 0.73 and 0.36 for phobic anxiety, respectively.

For quantitative variables, the mean and standard deviation were used to describe the data. While for qualitative variables, the frequency distribution and percentage were used to describe the findings. The chi-squared test and t-test were used to evaluate the association between mental health and its dimensions with demographic factors. The Kolmogorov-Smirnov test was applied to test for a normal distribution. Statistical significance was considered when P-value < 0.05. Data were analyzed using SPSS version 22.

The current study was conducted following the ethical principles of the Jundishapur University of Medical Sciences. Besides, it's confirmed by the Ethical Committee of the university. Informed written consent was obtained from all participants, and they were informed that they can withdraw from the study at any time. In addition, they were ensured about the confidentiality of their information.

Information on mental health dimensions are provided in Table 1, as mean ± standard deviation.

The percentage frequency and frequency distribution of mental health subscales separated by gender are provided in Table 2.

The mean score of mental health and its dimensions in patients with psoriasis is presented in Table 4.

Table 4. Mean Score of Mental Health and Its Dimensions

Psoriasis, as one of the most common inflammatory skin diseases, is affected by a variety of predisposing factors such as race, geographical location, genetic factors, and environmental conditions. Recent studies reported that the highest and lowest prevalence of psoriasis is in Western European countries and Southeast Asian countries, especially Japan, respectively. Given that in recent years, there has been a consensus on the association between psychiatric factors and the appearance or exacerbation of disease symptoms, this study aimed to investigate mental health in patients with psoriasis.

Kurd et al. (2010) showed that patients with psoriasis are at risk of depression, anxiety, and suicide (12). This study is inconsistent with the objectives of the present study, but the presence of a level of psychiatric disorder in these patients has been confirmed by the two studies. It can, therefore, be argued that these two studies are in line with one another in this regard.

A study conducted in Brazil by Marco et al. (2018) on 210 subjects (157 of them were healthy) with psoriasis. Reported a strong association between psoriasis and different dimensions of mental health, which is recommended to be considered clinically and for clinical treatment as well (11). This study is not consistent with the objectives of the present study; however, both studies have confirmed the presence of a level of psychiatric disorder as well as the need to pay more attention to mental health in these patients. It can, therefore, be inferred that these two studies are consistent in this regard.

Janoska et al. (2016) recommended that, due to the role of psychological factors, especially stress, in the development and course of psoriasis, it is necessary to perform psychotherapy for patients as well as their family as a part of the treatment regimen (14). This study is inconsistent with the objectives of the present study; however, in both studies, the presence of a level of psychiatric disorder and the role of underlying and psychological factors have been investigated. A study conducted by Biljan et al. (2009) on 70 patients reported a prevalence rate of 90% for psychiatric disorders in patients with psoriasis. Of these patients, only 28.6% were aware of their psychiatric disorder or were receiving treatment (15). Although the two studies are inconsistent in their objectives, there are differences in their results. So that in the present study, the level of psychiatric disorder in patients was moderate.

In their study on 70 patients in Semnan, Behnam et al. (2010) mentioned psychiatric pathology, especially depression, obsession, and anxiety symptoms, as common problems of patients with psoriasis. They also reported that these symptoms are strongly associated with the severity and duration of psoriasis (16), which is inconsistent with the findings of the present study. In the present study, no significant association was found between the severity and duration of the disease and the level of psychiatric disorder. The reason for this discrepancy may reside in the differences in the study period (a ten-year interval between the two studies) and the advancement of science in drugs and therapies, as well as the cultural differences of the cities that the studies were performed in.

The current study had limitations, including not investigating patients’ medications. Regarding that medications such as methotrexate and other immunosuppressive drugs affect mental health, future studies should consider their impact.

Although in the present study, psychiatric disorders were moderate, some studies reported high levels of psychological variables such as anxiety and depression in patients with psoriasis. To prevent possible psychological damages to patients, psychological counseling, as well as psychiatric consultation, are necessary, which not only help to reduce the consequences of the disease progression but also accelerate the recovery process. However, further studies are needed to investigate and evaluate the effects of other psychological dimensions such as perceived stress (stress management) and self-compassion (being kind to oneself). On the other hand, special attention should be paid to assessing and improving the family and marital relations of patients with psoriasis while emphasizing the extent and duration of the disease.

We wish to thank the research vice-chancellor of Ahvaz Jundishapur University of Medical Sciences and all of the participants in this research.

Copyright © 2021, Jundishapur Journal of Chronic Disease Care. This is an open-access article distributed under the terms of the Creative Commons Attribution-NonCommercial 4.0 International License (http://creativecommons.org/licenses/by-nc/4.0/) which permits copy and redistribute the material just in noncommercial usages, provided the original work is properly cited.
COMMENTS