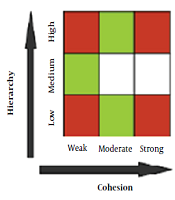 Power, Cohesion, and Structure in Healthy Families and Families with Chronic Psychiatric Patients: A Comparative Study

The hierarchy of power, dynamic of cohesion, and family structure might be affected in families with psychiatric patients.

This study aimed to compare the power, cohesion, and structure of healthy families and families with psychiatric patients.

A cross-sectional study was conducted in Shiraz in 2018. Participants were 322 people from healthy families and families with schizophrenic, depressive, or bipolar disordered patients that were compared in terms of cohesion and hierarchy of power. Participants were selected by convenience sampling. Data were collected using the Family System Test, a clinically-derived figure placement technique. Data were analyzed using SPSS-19 with Chi-square and Kruskal Wallis tests at a significance level of less than 0.05.

The negative effects of severe psychiatric disorders are not limited to the person with the illness but extend to the family members. Providing care to family members suffering from prolonged illness challenges the well-being of the family caregivers, and they suffer from heavy physical and psychological burdens (6). However, in our country, the mental health of the family and the challenges of families with psychiatric patients are neglected by health care providers.

In Iran and even other countries, there is limited evidence on the effects of the presence of psychiatric patients on the family structure (12, 15). For example, the results of a longitudinal study have shown that the presence of a patient with bipolar disorder reduces family cohesion (16). Also, family power and cohesion have often been investigated in studies evaluating non-psychiatric patients (17). In addition, to assess the family structure, most of the studies have used questionnaires with a large number of questions, which are not suitable for psychiatric patients.

This study aimed to compare the power, cohesion, and structure of healthy families and families with psychiatric patients.

This cross-sectional study was conducted in Shiraz. The participants included patients with schizophrenia, Bipolar Disorder (BD), Major Depressive Disorder (MDD), and a member of healthy families. The inclusion criteria for patients were age over six years, the family size of at least five persons, a known case of schizophrenia, BD, or MDD, intension to cooperate, parents not separated, and family members living together. The exclusion criteria included patients in acute or aggressive status, patients with recent electroconvulsive therapy, and patients not willing to continue participating in the study. The inclusion criteria for healthy participants were the same, except for not having a psychiatric illness. They were excluded from the study if they refused to continue participating in the study. All participants were selected using convenience sampling. The psychiatric patients were recruited from the Ibn-Sina and Hafez psychiatric hospitals in Shiraz, and healthy participants were recruited from the staff working in organizations. Each evaluation took 5-10 minutes.

Before the main study, a pilot study was conducted, which disclosed β = 0.2 and α = 0.05. According to the sample size formula:

(k: number of comparing groups), the minimum sample size was 60 participants in each group. Accordingly, a total of 322 participants were included in this study.

Data were collected using the Family System Test (FAST) from September to November 2018. The FAST was designed by Gehring and Willer in 1986. This clinically-derived figure placement technique has been designed to evaluate cohesion and power in the family. The FAST consists of a 45×45 cm monochromatic chessboard, with 81 squares of 5×5 cm that form a total of 9×9 squares. Schematic figures in male and female shapes and cylindrical blocks in sizes of 1.5, 3, and 4.5 cm were placed under the schematic figure, showing the power of hierarchy (Figure 1). The power is calculated through the height of the blocks used to elevate the figures, with growing differences indicating increasingly marked power. The evaluation of family power is based on the height difference between the less elevated parent figure and the most elevated childe figure. Low power is when the difference in parent-child height is less than one small block. The medium power is when the parent-child height difference is one or two small or middle-sized blocks. High power is when the difference in height between parent and child is a large block or more. 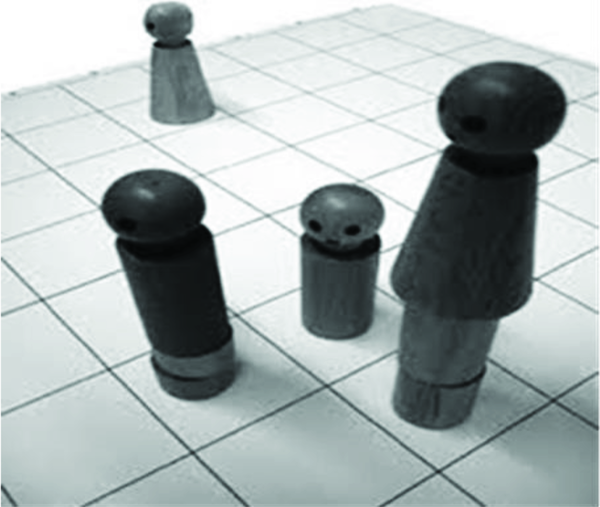 Family system test cohesion and hierarchy in a family

Cohesion scores are obtained from distances between the figures. The distance between figures is scored 1 on adjacent squares and 1.4 on diagonally adjacent squares. The maximum dyadic distance score is 11.3. To generate the cohesion score, each of the distance scores is subtracted from 12. Cohesion scores, thus, range from 0.7 to 11, with the higher scores indicating increased cohesiveness. According to the power and cohesion of the family, there are three types of family structure (Figure 2). A balanced structure indicates a moderate to high cohesive and medium power. A labile-balanced structure indicates a family with moderate cohesion and low or high power, or low cohesion and moderate power. Finally, an unbalanced structure is when both dimensions of cohesion and power are low or high (18). The validity and reliability of the tools were evaluated and reported in a previous study (17). In this study, the reliability of tools was evaluated by the test-retest method, and the correlation coefficients for power and cohesion were 0.86 and 0.94, respectively. 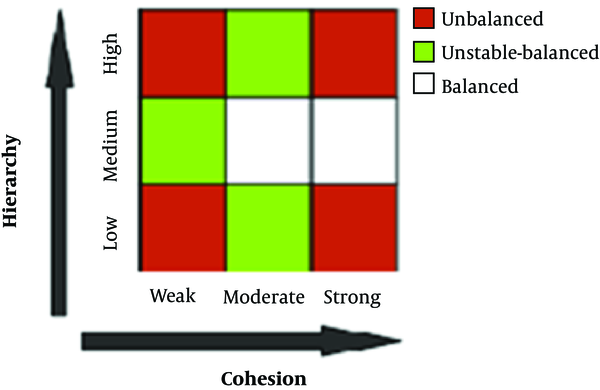 The table defining the type of family structure

This study was approved by the Research Ethics Committee of Bushehr University of Medical Sciences (IR.BPUMS.REC.1396-15). Participation in the study was voluntary, and written informed consent was obtained from all participants.

Table 1. Description of Participants
Table 2. Comparison of Power and Cohesion in Real and Ideal Conditions Between Healthy and Psychiatric Patients' Families

Table 3. Comparison of Family Structure Between Healthy Families and Families with Psychiatric Patients

The results showed that there was no significant difference between healthy families and families of psychiatric patients in terms of power. Consistently, the results of a study showed that there was no difference between the families of disabled and healthy individuals in terms of power (17). Inconsistent with our study, Brazilian researchers who conducted a study on the families of psychiatric patients found that the presence of a chronic mental patient affected the hierarchy of power in the family (10). Also, there was evidence that the family system of patients with schizophrenia was characterized by an uneven distribution of power and the existence of parent-offspring coalitions. Researchers argued that the uneven distribution of power in these families might be related to the premorbid period and was not necessarily related to the onset of the disease (19). Further studies are needed in this area.

The results of our study showed that cohesion was significantly lower in the family of patients with MDD than in healthy families. Consistent with this study, the results of a study showed that the family had revers cohesion with the degree of depression in cancer patients (15). The results of another study showed that depression had a predictive role in family cohesion (20). Researchers believe that several factors contribute to family adaptation during the illness of family members, and one of the most important of these factors is family cohesion (21). Contrary to these results, the findings of a study showed that in the actual situation, the highest cohesion was among healthy families, but in the ideal situation, the highest cohesion was observed in families with chronic patients (22). Also, the results of a study revealed that family cohesion of children with autism was at a higher level than that of the general population. It suggests that family members of children with autism were more emotionally linked with each other. Researchers concluded that philosophy and cultural beliefs emphasize individual growth and inspire individuals to strive for getting along with others in harmony posterior to encountering difficulty, which may encourage family caregivers to deal with their problems effectively and promote family bonding (23). For all that, families with chronic patients constantly engage their minds with patient problems. They ignore their physical and mental well-being that might result in psychiatric illness. Some families feel ashamed of having such psychiatric patients and attempt to limit their relationships with other people. In this challenging and anxious environment, family cohesion is affected, and thus, it can be concluded that families with healthy members have more cohesion than have families with ill members (17).

According to our knowledge, this is the first time that the FAST tool is used to assess the family structure of psychiatric patients in Iran. The limitation of this study was the assessment of the hierarchy of power and cohesion from the perspective of only one family member.

This study is part of a thesis submitted in the partial fulfillment of the requirement for a Master’s degree in Psychiatric Nursing (Elham Mirshah) and was funded by the Research Deputy of Bushehr University of Medical Sciences in the framework of the grant number 39952/20/DP. We would like to express our appreciation to the Clinical Research Development Center of Shohadaye Khalij Fars Hospital in Bushehr city.

Copyright © 2020, Jundishapur Journal of Chronic Disease Care. This is an open-access article distributed under the terms of the Creative Commons Attribution-NonCommercial 4.0 International License (http://creativecommons.org/licenses/by-nc/4.0/) which permits copy and redistribute the material just in noncommercial usages, provided the original work is properly cited.
download pdf 902.63 KB Abstract XML Get Permission (article level) Import into EndNote Import into BibTex
Number of Comments: 0