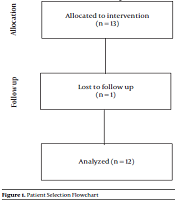 This study aimed to investigate the effects of multiple drilling technique on therapeutic outcomes of patients with osteochondritis dissecans (OCD) of the knee.

This controlled clinical trial was conducted on 24 patients aged 13 - 45 years with OCD types II and III according to the Dipaola classification and magnetic resonance imaging (MRI) assessments. The patients were classified into two groups (n = 12), including multiple drilling and control. Assessments including radiographic examinations, Tegner-Lysholm knee score, knee injury and osteoarthritis outcome score (KOOS), and visual analog scale (VAS) were performed before, three, and six months after treatment (surgery or conservative) for all patients, and the results were compared between the two groups.

Osteochondritis dissecans (OCD) is a complication in which part of the joint bone separates from the rest of the bone due to a lack of blood supply. This disease usually affects the femoral condyles, and it is more common in the internal condyle of the femur in 85% of cases. Early detection causes the treatment to be more effective and reduces the risk of side effects. In the chronic type of OCD, when conventional treatments fail, surgical procedures including arthroscopic or open operations are recommended. In this regard, surgical methods are divided into two types of reparative and restorative surgeries. The most common reparative surgical procedures are arthroscopic debridement, abrasion arthroplasty, microfracture, and multiple drilling, and in the restorative surgical procedures, a new cartilage is inserted in the lesion area (1-3). When conservative management fails to heal OCD lesions, then drilling of the lesion to stimulate healing may be beneficial. This method enables additional drill holes to be positioned perpendicular to the OCD lesions, particularly the posterior lesions with minimal intra-articular access. This procedure also prevents intraoperative damage to the superjacent intact articular cartilage and facilitates bone healing through the fenestration of the sclerotic rim around the OCD lesion. Also, because of using orthoscopic method, multiple drilling is the least invasive method. OCD drilling results are often desirable. Retroarticular drilling approaches have resulted in high rates of recoveries with low complications (4-6). Moreover, unlike surgical procedures of osteochondral, perichondrial, periosteal, or chondral autograft, there is no problem of morbidity of the removed site in this method (7, 8). Considering the various methods proposed with the advantages, deficiencies, and different levels of efficacy, the most appropriate method for treatment of OCD of the knee has not been introduced yet.

This study aimed to investigate the clinical and functional outcome of treatment with multiple drilling technique and the satisfaction rate of treatment in patients with OCD of the knee.

After obtaining permission from the Research Ethics Committee of Ahvaz Jundishapur University of Medical Sciences (Code: IR.AJUMS.REC.1396.906), this clinical trial (Code: IRCT20200819048462N1) was conducted on 24 patients aged 13 - 45 years with OCD types II and III according to Dipaola classification in Ahvaz Imam Khomeini Hospital. One year before the treatment, OCD was diagnosed based on magnetic resonance imaging (MRI), standing anterior-posterior, 45° posterior, anterior, and lateral radiographic images between symptomatic patients. In the multiple drilling group, the knee joint was completely investigated arthroscopic through anterolateral portal (standard portal), and lesions greater than 2 cm were excluded from the study.

Exclusion criteria were history of ligament or meniscus injury causing a major problem for the patient; fracture history in the last four weeks; valgus or varus deformity with 5 degree medial or lateral deviation; morphine consumption for more than three months; osteoarthritis caused by inflammatory diseases including rheumatoid arthritis (RA), gout, chondrocalcinosis, etc.; history of any surgery around the knee; history of intra-articular knee injection in the last six months; and severe pain in the patient or musculoskeletal dysfunction.

The eligible patients were divided into two groups (n = 12), including the multiple drilling and control groups. The patient selection flowchart is presented in Figure 1. In the intervention group, surgical treatment was performed with multiple drilling technique. The multiple drilling technique was performed using a Trocar, and 4 - 6 weeks after surgery, the knee movement was limited by a brace to control the range of motion and partial weight bearing. In the control group, non-steroidal anti-inflammatory drugs (NSAIDs) were prescribed for one month along with 15 sessions of physiotherapy in the form of isometric exercises and adjustment of daily activities. All patients signed written consent for participating in this study, and all procedures performed in our research were in accordance with the related ethical standards. 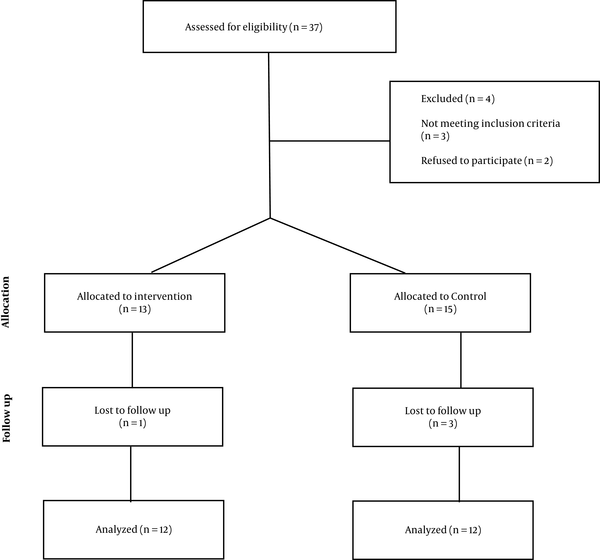 Assessments were performed before, three, and six months after surgery, including clinical examinations, duration of return to previous activities, and completion of Lysholm, knee injury and osteoarthritis outcome score (KOOS), SF-36, and visual analog scale (VAS) (0 (no pain) to 10 (worst pain imaginable)) questionnaires. The Tegner Lysholm Knee Scoring Scale equal to 100 indicated no problems, and 0 indicated extreme problems. Also, other scores were categorized as follows: 65 > (Poor), 65 - 83 (Fair), 84 - 90 (Good), and 90 > (Excellent).

To describe the qualitative data, frequency, and percentage and for quantitative variables mean, and standard deviation were used. chi-square, paired, and independent t-test were used to compare the data of the two groups. All analyses were performed using SPSS software version 22, and the significance level was less than 0.05.

The demographic information (age and gender) in the two groups was not significantly different (Table 1).

To assess the severity of functional impairment of knee, both groups completed the Lysholm Knee Scoring Scale questionnaire at three different time points, including before treatment, three, and six months after treatment.

In the intervention group, no surgery failure was reported among the patients, the union was obtained in all patients, and unexplained pain was reported only in patients who had osteochondritis along with knee osteoarthritis, which was considered as one of the confounding factors in the results of the study.

Knee OCD management continues to be a controversial issue. The American Academy of Orthopedic Surgeons (AAOS) issued a new Clinical Practice Guideline that did not offer any suggestion with a ‘strong’ grade about treatment (9). Since applying multiple drilling for treating adults with OCD has rarely been investigated so far, in this study, we reported the treatment outcome of multiple drilling in 12 patients with OCD of knee. The patients in multiple drilling group reported significant improvement in their functional level based on Lysholm and KOOS scores. The pain score also showed a significant reduction in the intervention group.

In a systematic review, Gunton et al. evaluated 12 studies which analyzed 111 retroarticular and 94 transarticular drillings of stable OCD lesions for their short-term clinical outcomes. During a mean of four to six months, both methods led to close radiographic healing of 86% and 91%, respectively, without any complications (10). In a retrospective research, 40 pediatric cases with femoral condyles osteochondritis treated through arthroscopic multiple transchondral drilling were studied by Hayan et al. based on the clinical and radiological scores. Desirable clinical and radiological results were obtained in 97.5% and 95% of cases, respectively, in which there was a significant correlation between clinical scores and radiological scores (P < 0.001). In their study, favorable clinical and radiological outcomes were observed in all patients exhibiting juvenile condylar osteochondritis with an open growth plate during their treatment. This demonstrated the validity and efficacy of multiple transchondral drilling in this form of the lesion (11). Goebel et al. investigated the outcome of minimally invasive retrograde drilling of femoral osteochondral lesions on 35 juvenile OCD and 19 adult OCD cases using an arthroscopic drill guide. Radiographic scoring showed an improvement in 81.6% of the knees. In general, more desirable radiographic outcomes were observed in juvenile OCD (88.2% healing) than adult OCD (66.7% healing) (12). Boughanem et al. prospectively evaluated outcomes of extra-articular retrograde drilling in OCD of the knee by functional and radiographic assessments. Their results showed that in most adolescents with OCD lesions who did not have a successful non-operative management, retrograde extra-articular drilling can result in clinical and radiographic improvement. They demonstrated that in stable OCD lesions, this technique can decompress the lesion and facilitate revascularization with no disruption on the articular cartilage surface (13). Yonetani et al. studied the outcomes of OCD of the medial femoral condyle treated with transarticular drilling. In their study, all 18 patients regained their former level of sports activity, and outstanding functional results were reported. They concluded that outstanding functional outcomes can be achieved by transarticular drilling for stable juvenile OCD. The osteochondral type, however, can affect the radiographic results (14). Edmonds et al. investigated the extra-articular and intra-epiphyseal drilling for OCD of the knee in 59 patients, and their results showed that both of them can lead to favorable outcomes over the historical controls by employing intra-articular drilling for patients with unsuccessful initial conservative management (15). Donaldson et al. identified the outcomes of extra-articular drilling for stable OCD in the skeletally immature knee. Based on the obtained results, they concluded that when non-operative management of stable JOCD is not effective, arthroscopic extra-articular drilling can be a beneficial approach to secure the articular surface and accelerate bone healing (16). Adachi et al. investigated functional and radiographic results of 20 stable juvenile OCDs of the knee treated with retroarticular drilling without bone grafting. A significant increase in the mean Lysholm score was reported after the operation (from 72.3 to 95.8), and healing was observed on plain radiographs after an average of 4.4 months and on MRI after 7.6 months. The results of their study showed that retroarticular drilling without bone grafting can result in better clinical results and increase the healing rate. They found that retroarticular drilling is a good method for patients with stable juvenile OCD of the knee who experienced an unsuccessful initial non-operative treatment (17). In a review study, Kumar et al. reviewed 25 articles, including outcomes of treatment for Grade I OCD in young professional athletes. They observed that most authors have reported good to excellent results of drilling of early OCD in skeletally mature patients. They recommended initial non-operative management in patients with open physis. If the lesion progresses or the conservative treatment fails, a reparative, restorative, or palliative surgical intervention may be performed. They recommended reparative surgery either through retro- or trans-articular drilling for Stage I OCD lesions in patients having closed physis (18). In another study, Shaikh et al. evaluated 17 cases of juvenile OCD of the femoral condyle of the knee treated by transarticular drilling approach; they reported that in the case where conservative treatments do not result in any signs of healing or where the lesion is not stable, the lesion can be treated surgically, either just drilling or fixation accompanied by drilling to increase the level of healing (19). Chiang et al. reported the treatment outcome of multiple drilling in a 20-year-old male with a massive OCD lesion at the lateral femoral condyle, accompanied by a non-complete type discoid meniscus. After one year of follow-up, both VAS and the International Knee Documentation Committee (IKDC) scores significantly improved; images also suggested nearly complete remission of the OCD lesion and meniscus tear. They suggested that multiple transchondral drilling would be an adequate treatment option for adult OCD of lateral femoral condyle (20).

The main limitations of this study were the small sample size due to the non-prevalence of the disease and the lack of access to all operated patients during follow-up, which reduced the number of studied patients.

The results of the study showed a significant improvement in the functional level and pain in patients treated with the multiple drilling technique. To more accurately evaluate the treatment outcomes and the recurrence rate of the disease, it is recommended to design a long-term prospective study (several years), as well as a study comparing the multiple drilling technique with other treatment techniques proposed for the treatment of OCD of knee.

The authors would like to thank Ahvaz Jundishapur University of Medical Sciences for supporting the study.