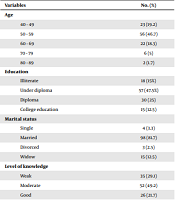 Evaluating the Knowledge and Attitude of Menopaused Women for Breast Cancer Screening: A Cross Sectional Study in Iran

Breast cancer (BC) is a major public health problem worldwide. Considering the high prevalence and mortality of BC in postmenopausal women, and since the population of Iran is aging, this study aimed to investigate the knowledge and attitude of postmenopausal women in Jahrom, Iran regarding BC screening.

This cross-sectional study was performed on postmenopausal women referred to Honari Clinic of Jahrom in 2019. To select the samples, 120 women were randomly selected from the existing medical files. Data collection tools included a demographic information questionnaire and the knowledge and attitude questionnaire on BC screening behavior. After explaining the objectives of the research to the participants and obtaining a consent form, the questionnaire was answered by them. The data were entered into SPSS software version 21 and tested by descriptive statistics, chi-square, Kruskal-Wallis, and one-way ANOVA tests. Descriptive statistics were used to examine demographic data.

The mass media, especially radio and television, as well as physician and health system staff, play an important role in raising women's awareness to increase their participation in BC screening programs.

Breast cancer (BC), a major public health problem worldwide, is the second most common cancer and a prime reason for death in women worldwide (1). The prevalence of BC in developing countries has been increasing in recent years due to increased life expectancy, urbanization growth, and poor lifestyle (2).

The incidence of BC varies widely, from 25 per 100,000 in Central Africa and East Asia to 92 per 100,000 in Western Europe. Incidence is projected to increase by 46.5% worldwide by 2040 (3). BC is on the rise in the Middle East and is rapidly approaching the level of the disease in Western countries (4). The rate of BC is expected to double in 2030 compared to 2012 in the Middle East, which is the highest relative increase compared to other parts of the world (5). The mortality rate from BC in the Eastern Mediterranean countries is 70%, which is higher than the mortality rate in developed countries (6). BC accounts for 32% of all types of cancer among Iranian women (7).

Early detection plays a key role in preventing BC mortality and increases the 5-year survival rate of patients from 56 to 85% (8). Studies have shown that low levels of knowledge, fear, and psychosocial barriers are the main reasons for women not participating in BC screening programs (9-11).

Women in the Middle East face a number of psychosocial, cultural, and doctrinal challenges that lead to a negative attitude toward screening, resulting in delays in the diagnosis of BC and an increased risk of death (12). A closer look at women's knowledge and attitudes is useful to better understand how they decide whether or not to participate in BC screening (13).

Kalliguddi et al.'s study in India showed that the level of knowledge and attitude of women about breast self-examination is very low (8). Naqvi's study showed that Pakistani women's knowledge and attitude about BC screening is inadequate (14). A systematic review of the results of various studies in Iran showed that women's attitude toward BC screening is inappropriate (6). Considering the high prevalence and mortality of BC in postmenopausal women (15) and given that the population of Iran is aging (16) and considering the contradictory results of previous research in this field in Iran (17-19) and the fact that women in Jahrom have special religious and cultural characteristics that can affect their participation in BC screening programs, this study was conducted to investigate the knowledge and attitude of postmenopausal women in Jahrom regarding BC screening.

This cross-sectional study was performed on postmenopausal women referred to Honari Clinic of Jahrom, Iran, in 2019. Considering the minimum value of correlation coefficient as 0.25, Type I error (α) as 0.05, and power of 80%, the sample size was determined as 120 individuals.

The inclusion criteria were women aged 45 to 89 (to cover all menopausal women) referring to Honari Clinic in Jahrom. The exclusion criteria included dissatisfaction with the study and a history of malignant breast disease.

In the present study, the reliability of the questionnaire with the participation of 30 postmenopausal women was measured by Cronbach's alpha method, which was 0.72 for the knowledge section and 0.79 for the attitude section.

After explaining the research objectives to the participants and obtaining a consent letter, the questionnaire was answered by the participants in the presence of researcher. For illiterate women, the questionnaires were completed with the help of the researcher. All participants answered the questionnaire completely. Then, the data were entered into SPSS software version 21, and the data distribution was checked by Kolmogorov-Smirnov test. Demographic variables were analyzed using descriptive statistics and chi-square test. Knowledge question data had no normal distribution and was tested by Kruskal-Wallis tests. The data of attitude questions had a normal distribution and were tested by one-way ANOVA test. Descriptive statistics were used to examine demographic data.

Table 1. Demographic Variables and Frequency of Level of Knowledge and Attitude of Postmenopausal Women

Table 2. Association of Knowledge and Attitude with the Source of Information and History of Breast Diseases

There was no significant association between the mean score of knowledge and attitude of postmenopausal women with breast-related diseases and family history of BC (Table 3).

Table 3. Association of Knowledge and Attitude with Breast-Related Diseases and Family History of BC

a P value is calculated by Kruskal-Wallis test.

b P value is calculated by one-way ANOVA test.

The knowledge of the majority of participants about BC screening was poor and moderate. Thomas' study found that most Iranian women have little knowledge of BC risk and do not play an active role in BC screening (17). Asgharnia’s study showed that a low percentage of Iranian women have a good knowledge about BC screening (21). However, in Hassanzadeh's study, women's knowledge was at a desirable level, though they had a poor practice in this field (18). The results of a meta-analysis by Ahmadi in Iran showed that women's awareness of BC screening in various studies was between 5 and 79.8% (22). Considering the findings of the present study and some contradictory results of other studies in Iran, it seems that there is no coherent plan to involve women in the BC screening program. It also seems that cultural and social differences in different regions of the country can affect the awareness and participation of women in BC screening program.

In Alshahrani et al.'s study of Saudi women, the majority of participants had a low knowledge of BC and its various screening methods (23). Findings from a study in India showed that more than half of women were aware of BC, but most of them had poor knowledge about early diagnosis (24). According to the results of these studies, there are differences in the level of awareness of women about BC screening in other countries in the West Asian region. Based on the findings of one of the mentioned studies, although the people's information about BC is somewhat desirable, knowledge about BC screening is not at the desired level as an effective way to prevent complications.

While the majority of women had a positive attitude towards BC screening in the present study, the majority of women in the study by Al-Azri et al. in Oman did not have a positive attitude towards BC screening (12). In Heena et al.'s study, more than half of the participants believed that they could not be diagnosed by BC screening (28). In Andegiorgish et al.'s study of female nurses in Eritrea, the majority of participants had a positive attitude towards BC screening, although many of them considered the disease to be specific to the elderly (29). This discrepancy may be due to the fact that various studies have addressed different aspects of women's beliefs about the importance of BC and its screening. For example, Heena et al.'s study focused on women's attitudes about perceived sensitivity to the disease and the ability of the experiment to diagnose it, while in the present study, different aspects of women's attitudes toward BC screening were considered (28).

People's attitudes were significantly related to obtaining information from physician and health system staff. The studies by Jensen et al. (30) and Price et al. (31) showed that women's participation in BC screening was strongly related to general practitioners' attitudes toward BC screening. In Ghanouni et al.'s study of women's attitudes towards risk-stratified BC screening among women, general practitioners and cancer specialists were preferred as a source of information in high-risk individuals (32). Women consider physician and health system staff as a reference for health information. Physicians and healthcare personnel can play an important role in attracting women's attention and confidence in the BC screening program.

The limitation of the present study was the lack of cyberspace as a new communication medium among the sources of information about BC screening. The standard questionnaire used had its drawbacks; for example, there was no ‘I do not know’ option in knowledge questions. The strength of this study is the selection of the study sample from a wide range of postmenopausal women in terms of age, which allows the results to be generalized to a wide range of postmenopausal women. Also, the research was conducted with the desired quality due to full access to the participants.

The majority of women had moderate knowledge and a positive attitude towards BC screening. The mass media, especially radio and television, as well as physician and health system staff play an important role in raising women's awareness to increase their participation in BC screening programs. It is suggested to plan for the cooperation of mass media and health system personnel to encourage women, especially the elderly, to participate in BC screening.

This study was derived from a research study (code: 98001488) at Jahrom University of Medical Sciences.