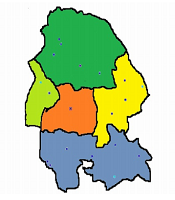 Evaluation of Celiac Disease Prevalence Among Patients with Refractory Hypothyroidism: A Cross-sectional Study

The association of celiac disease (CD) with refractory hypothyroidism is a known but less common condition.

This study aimed to evaluate the prevalence of CD among patients with refractory hypothyroidism and compare the accuracy of different diagnostic procedures of CD in these patients.

During a six-month period, 25 patients with refractory hypothyroidism were included from the endocrinology outpatient clinics of Ahvaz Jundishapur University of Medical Sciences, Khuzestan, Iran. For all the participants, the serological profile of CD, including anti-tissue transglutaminase (anti-tTG), anti-endomysial antibody (anti-EMA), and total immunoglobulin A, was determined, and then they were referred to undergo upper endoscopy and random biopsies from the first and second parts of the duodenum.

Based on the results of this pilot study, the prevalence of CD among cases with refractory hypothyroidism is higher than that of global reports. Furthermore, routine screening of CD in these patients is highly recommended even with negative serology. The endoscopic view is not adequate for the diagnosis of CD among patients with refractory hypothyroidism. In addition, it is necessary to focus on pathology reports and antibody titer.

Celiac disease (CD) is one of the common autoimmune enteropathies with a high prevalence of undiagnosed subjects developing in intolerant individuals to a gluten-containing diet and related proteins (1). Untreated conditions can result in an intensive malabsorption syndrome and serious morbidity with autoantibodies against tissue transglutaminase and gliadin (2, 3). Clinically, a minority of CD patients present the classic manifestations, such as diarrhea, steatorrhea, and/or weight loss. Most cases presenting with atypical complications (e.g., osteoporosis, osteopenia, or bone fracture), and symptoms could remain undiagnosed and be missed (4-9).

Autoimmune endocrine diseases, such as autoimmune thyroid disorders, are closely associated with CD. Among these disorders, a higher prevalence of CD has been reported in subjects with autoimmune hypothyroidism. In addition, one of the most common concomitant non-gastrointestinal disorders among patients with CD is thyroid disease (9, 10). On the other hand, CD is one of the important causes of malabsorption that can lead to the suboptimal bioavailability of medications in CD patients, including those with hypothyroidism.

Atypical CD increases the need for levothyroxine. The effect was reversed by a gluten-free diet (GFD) or an increase in levothyroxine dose, and the malabsorption of levothyroxine may provide the opportunity to detect CD that was overlooked. Therefore, researchers believe that the diagnosis of CD should always be considered in patients requiring higher than usual doses of thyroid hormone replacement, even in patients with a normal bowel habit and no other apparent manifestations of the disease (1, 11-13). Among those with undiagnosed CD and autoimmune hypothyroidism, the consumption of gluten-containing foods can result in refractory hypothyroidism despite high doses of levothyroxine, probably due to drug malabsorption (1, 11).

This pilot study was carried out on 25 patients, including 6 male and 19 female patients, within the age range of 17 - 53 years. The mean age values of male and female subjects were 31.3 ± 17 and 34.3 ± 8.5 years, respectively. During a six-month period (within September 2014 to March 2015), the patients with refractory hypothyroidism were included from the endocrinology outpatient clinics of Ahvaz Jundishapur University of Medical Sciences, Khuzestan, Iran. For all the participants, serologic tests for CD, including anti-tissue transglutaminase immunoglobulin A (anti-tTG IgA) immunoglobulin G, anti-endomysial antibody (anti-EMA) IgA, and total IgA, were requested. The serum was diluted at 1: 100, and all the aforementioned indicators were measured by enzyme-linked immunosorbent assay (ELISA) (15). All the serologic measurements were performed in a standard referral laboratory.

All the participants underwent an upper endoscopy regardless of antibody titer for CD and random biopsies taken from the first and second parts of the duodenum with spike forceps for histology (at least four biopsies). A well-experienced pathologist assessed the biopsy samples and classified them based on Marsh criteria (16, 17).

Hypothyroidism was also demonstrated by the presence of anti-thyroid peroxidase antibodies and raising thyroid-stimulating hormone (TSH) (18). The participants were diagnosed with refractory hypothyroidism in case of the need for more than 250 μg levothyroxine daily. This pilot study was approved by the Ethics Committee of Ahvaz Jundishapur University of Medical Sciences (ajums.REC.1392.175).

The data were statistically analyzed by SPSS software (version 20), chi-square test, and independence test. The continuous data with normal distribution and categorical data were reported as means±standard deviation, percentage, and frequency, respectively. A P-value of less than 0.05 was considered statistically significant.

The demographics and general characteristics of the participants are summarized in Table 1. In the beginning, 25 patients with refractory hypothyroidism within the age range of 17 - 53 years were enrolled in this study, 76 and 24% of whom were female and male, respectively. The mean age values of male and female participants were 31.3 ± 17 and 34.3 ± 8.5 years, respectively. The mean dosage of levothyroxine used for refractory hypothyroidism was 285.1 ± 89.9 mg, and the mean duration of the disease was 7.2 ± 6.9 months. According to Figure 1, in terms of geographic distribution, 12 cases (50%) resided in Ahvaz and the central part of the province. The rest of the patients were from the east (8.3%), north (33.3%), and other areas of Khuzestan province (8.3%).

Among the participants, the most common concomitant disease was anemia (72%). The most frequent gastrointestinal complaint was diarrhea (25%), and 33.3% of the subjects had other complaints (Table 2). A total of 7 patients (1 male and 6 females) had a nonspecific rise of liver enzymes (i.e., less than three times more than the upper limit of the normal range). The most common serologic findings in these patients were positive anti-tTG (28%) and anti-EMA (16%). The sensitivity and specificity of tTG were 33 and 87.5%, respectively. The sensitivity and specificity of EMA were 11.1 and 87.5%, respectively.

Table 1 . Baseline Characteristics of Patients a

a Values are expressed as mean ± SD or frequency of individuals (%). 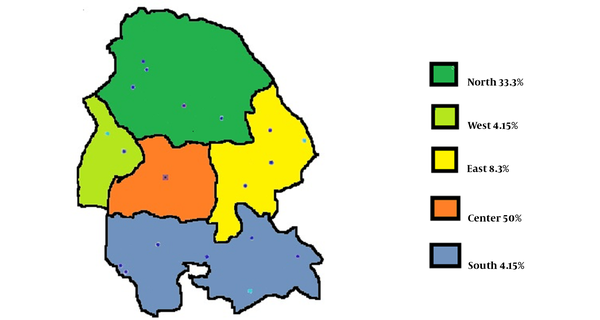 Table 2. Most Common Comorbidities a

a Values are expressed as frequency of individuals (%).

In the upper endoscopy, the most common findings were normal mucosa (48%), gastritis (28%), duodenal fissuring (8%), duodenal atrophy (8%), and duodenal erythema (8%) (Table 3). The most common pathologic report was the presence of CD in 20% of the patients (mostly marsh 1 and 0 stages).

a Values are expressed as frequency of individuals (%) unless otherwise indicated.

The CD may lead to therapeutic failure in patients with refractory hypothyroidism due to the impaired absorption of levothyroxine. Recently, the greatest challenge for endocrinologists regarding the treatment of refractory hypothyroid patients has been the determination of drug dosage in these cases. Recent studies reported the close association of CD with autoimmune endocrine disorders, especially autoimmune hypothyroidism (19). According to these reports, the prevalence of occult autoimmune hypothyroidism in CD patients is higher; therefore, it seems logical to perform routine tests for checking the thyroid function among all CD patients (20-22).

On the other hand, some other studies evaluated the prevalence of occult CD in autoimmune thyroid diseases, namely autoimmune hypothyroidism (23). In occult CD, where the asymptomatic condition damages small intestinal mucosa and the serology tests for autoimmunity are positive, the genetics of these cases is compatible with their disease, and they may have a normal mucosa at an earlier step while having a regular diet; nevertheless, the disease may develop later (4, 24).

Recently, studies have reported the high prevalence rate of undiagnosed CD patients with atypical presentations in the general population (9, 29). Individuals with atypical manifestations may masquerade as anemia, infertility (30), and/or osteoporosis (1). The most prominent concomitant disease of the present study was anemia, and the most frequently reported gastrointestinal complaint was diarrhea. Unfortunately, screening these subjects has not been currently advocated. Patients with occult CD also show immunologic abnormalities, such as a positive IgA antibody, against tissue transglutaminase and endomysium or may have raising intraepithelial lymphocytes in their small intestine (10).

The endoscopic small bowel biopsy is the gold standard test for CD diagnosis, and serologic screening tests are widely available. The detection of anti-EMA and anti-tTG antibodies by ELISA has a sensitivity range of 95 - 98% and specificity range of 94 - 95% (31). Up to 2.6% of the results may be false negative. However, EMA and tTG are widely used for CD screening in most laboratories worldwide (32). The most common serologic finding in the cases of the present study was raising anti-TTG and anti-EMA, respectively; nevertheless, their sensitivity and specificity were lower than those reported for usual cases (33 and 11.1% vs. 95 - 98% and 87.5% vs. 94 - 95%, respectively). Therefore, these serologic markers are less reliable for the diagnosis and screening of CD among subjects with refractory hypothyroidism.

As previously described, CD is characterized by villous atrophy and intestinal malabsorption, mainly affecting the duodenum, jejunum, and proximal ileum. As a result, these patients have a problem with the absorption of oral levothyroxine (25). Recent studies have demonstrated patients among whom CD diagnosis was delayed, and TSH levels were persistently elevated despite increasing doses of levothyroxine. Finally, CD diagnosis in the aforementioned subjects was made, and their daily requirement of levothyroxine decreased upon the commitment to a GFD (33).

In the upper endoscopy of the present cases, the most common findings were normal mucosa, gastritis, duodenal fissuring, duodenal atrophy, and duodenal erythema, respectively. Therefore, it is recommended to obtain duodenal biopsy specimens even from normal-looking mucosa. The most predominant pathologic report was also the presence of CD in 5 patients (mostly marsh 1 and 0 stages). The overall endoscopic view is not accurate for the diagnosis of CD among cases with refractory hypothyroidism, and it is necessary to focus on pathology reports and antibody titer (34, 35). In case of pathology report as marsh 0 or 1 stages, it is worth mentioning to refer patients for a genetic study to confirm the diagnosis and lifelong commitment to a GFD.

However, there have been a limited number of studies evaluating this issue, regarded as the strong point of the current study, this investigation was performed as a single-center study with a small sample size, which could be considered a limitation.

The prevalence of CD among cases with refractory hypothyroidism is higher than that of global reports, and routine screening of CD in these patients is highly recommended even with negative serology. The sensitivity and specificity of serologic tests in hypothyroidism patients are lower than those reported for patients with normal thyroid function; this finding can encourage physicians that even in case of negative serological results evaluate patients for the possibility of CD using upper endoscopy and random duodenal biopsy. The pathology reports of marsh 0 or 1 stages are potential candidates for a genetic study to confirm the diagnosis and lifelong commitment to a GFD.