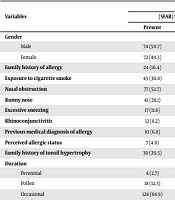 Allergic diseases are among the most common chronic conditions in pediatrics.

This study aimed to evaluate the relative frequency of allergic rhinitis (AR) in children with adenotonsillar hypertrophy.

In this descriptive study, 175 patients with adenotonsillar hypertrophy referred to the Imam Khomeini hospital of Ahvaz from March 2019 to March 2020 were enrolled. Allergic rhinitis was diagnosed based on the Score for AR (SFAR) questionnaire. The questionnaire, including the expert-designed SFAR, has eight main components that evaluate eight quantitative features of AR, and each was designated with a specific weighted score based on previous clinical studies. The total score could vary from 0 to 16. Frequency and percentage were used to describe the data. The chi-square test and Fisher's exact test were used to analyze the data.

One hundred seventy-five patients with adenotonsillar hypertrophy in the age range of 1 to 17 years were studied. Ninety-one patients (52%) were male, and 84 patients (48%) were female. Based on the score obtained from the questionnaire, 146 patients (83.4%) had a score of less than seven, indicating susceptibility to AR. Twenty-nine patients (16.6%) had a score equal to or higher than 7, confirming the diagnosis of AR. The Chi-square test showed that AR was significantly associated with all the components of the questionnaire, except for cigarette smoking (P-value < 0.001).

This study showed the strong association of AR with some demographic factors. Allergic rhinitis could potentially increase the risk of adenotonsillar hypertrophy in children.

Allergic rhinitis (AR) is a common respiratory illness in early childhood and has a high frequency in school-age children (1). This condition is regarded as an irritable reaction caused by immunoglobulin E (IgE)-mediated type 1 hypersensitivity of the nasal mucosa, leading to the eosinophilic inflammation and allergic reactions of mucous membranes (2). Moreover, AR affects about 10 to 54% of the world's population. It is a worldwide health problem causing disability in all age groups and in people with different socio-economics features. Allergic rhinitis is classified as a seasonal and perennial disease, and currently, it is known to present with either intermittent or persistent symptoms (3, 4). Diagnosis is usually based on a typical history taking, as well as in vivo and in vitro tests. The detection of IgE, especially allergen-specific IgE, is the basis of the in vitro test (5). Tonsils and adenoids are parts of the waldeyer's ring, whose primary function is to produce antibodies. Adenotonsillectomy is the most common surgery in children (6, 7), potentially enhancing their quality of lives. This procedure is usually performed due to either tonsil enlargement obstructing airways or infectious etiologies (8).

However, the exact causes of adenotonsillar hypertrophy are still unknown. Allergic rhinitis generally affects 10 - 30% of the population, with the highest prevalence in children and adolescents. The role of allergy in adenotonsillar hypertrophy has been highlighted in the literature (7). The adenoid and tonsil tissues are located at the first part of the respiratory tract, making them the first parts contacting inhaled allergens. Reports have recommended that allergic diseases by influencing the adenoid and tonsil tissues cause allergic inflammation (9).

On the other hand, in vivo tests rely on the skin tests as primary diagnostic procedures in allergy. When these tests are performed correctly, they can provide evidence for the presence of a particular allergen (10, 11). These tests include the skin scratch test, prick/puncture test, and intradermal skin test. Recently, a modified skin prick test has been introduced as the reference method recommended by the European Academy of Allergy and Clinical Immunology (EAACI), American Academy of Allergy, Asthma, and Immunology (AAAAI), and World Health Organization (WHO) (12). Still, allergen tests are not always accessible, and their usefulness may be questionable in different locations and populations. It has been observed that when patients change their surroundings, especially when they travel abroad, their symptoms are relieved due to getting rid of local allergens (13). Therefore, a score for allergic symptoms will be helpful as a tool for subjectively and quantitatively evaluating allergic patients. The score for AR (SFAR) questionnaire provides a valid and straightforward assessment method in epidemiological studies (14). Preventing the enlargement of tonsils by reducing exposure to allergens and subsequently adenotonsillectomy may be helpful in alleviating children’s and adolescents’ symptoms.

This study aimed to evaluate AR frequency in patients with adenotonsillar hypertrophy referred to the Imam Khomeini hospital of Ahvaz from 2019 to 2020.

This research was a descriptive epidemiological study. The study population included the children aged 1 - 17 years, referred to the only ENT clinic in Ahvaz (i.e., Imam Khomeini hospital). These patients had been diagnosed with adenotonsillar hypertrophy and referred to the hospital for adenotonsillectomy between 2019 and 2020. All experimental procedures were approved by the local ethics committee (ethics code: IR.AJUMS.REC.1398.959) and were in complete agreement with the human studies' ethical regulations of the Helsinki declaration (2013). Written consent was obtained from parents.

Inclusion criteria were the age range of 1 to 17 years and an adenotonsillar hypertrophy diagnosis, and exclusion criterion was an age > 17 or < 1 years (15).

According to our literature review, the minimum sample size was 153 (16).

The patients or their parents were requested to complete the SFAR questionnaire. The questionnaire's components were explained to them, and the patient's parents chose the desired answer in each section. The questionnaire, has eight main components that evaluate eight quantitative features of AR, and each was designated with a specific weighted score based on previous clinical studies. The total score could vary from 0 to 16. The key eight features of the SFAR questionnaire include: (1) nasal symptoms during the past year (nasal congestion, sneezing, and runny nose); (2) nasal symptoms accompanied by itching eyes (rhinoconjunctivitis); (3) month (s) of having nasal symptoms; (4) factor (s) aggravating nasal symptoms (house dust, pollen, animals, etc.); (5) perceived allergic status; (6) a previous medical diagnosis of allergy; (7) a previous positive test (s) for allergy; (8) family history of allergy.

On average, it took only three minutes for the individuals to be interviewed on the phone to complete the questionnaire. All questions were well understood by the participants (14). The collected information included age, sex, place of residence, a family history of allergy, exposure to smoking, and AR symptoms. Frequency and percentage were used to describe the data.

Having either sneezing, runny nose, or nasal congestion, each was scored one point. Nasal symptom (s) accompanied by eye itching (i.e., rhinoconjunctivitis) earned two points. The onset or aggravation of AR symptoms after exposure to pollen, house dust, or mite each was granted one point. Symptom exacerbation due to pets earned one extra point. A positive history of allergic reactions and positive allergic test (s) each was scored two points. A definite medical diagnosis of allergy earned one point. Finally, a positive family history of allergy was scored two points, and seasonal or perennial symptoms each was granted one score (8, 14).

All statistical analyses were done in SPSS v26 software. Aside from AR assessment, demographic features and smoking exposure were also recorded to perform further analyses. Frequency and percentage were used for describing the data, and the chi-square and Fisher’s exact tests were used to reveal possible relations between variables. The normality of the data was evaluated via the Kolmogorov-Smirnov test and Q-Q graph. The significance level was considered at P value < 0.05.

One hundred seventy-five patients were included. Ninety-one patients (52%) were male. Based on the score obtained from the questionnaire, 146 patients (83.4%) had a score of less than seven, indicating their susceptibility to AR. Twenty-nine patients (16.6%) had a score equal to or higher than 7, indicating a definite AR diagnosis (Table 1).

Table 1. The Distribution of Demographic and Clinical Variables Based on the SFAR Questionnaire Score

Regarding the duration of symptoms in patients with AR (i.e., a score greater than or equal to seven), 27.6 and 62% of the patients had perennial and seasonal diseases, respectively. Overall, 23 patients (79.3%) had a family history of adenotonsillar hypertrophy. Moreover, the chi-square test showed a significant relationship between AR and all the components of the questionnaire, except for exposure to cigarette smoke (P-value < 0.001). There was no significant relationship between AR and exposure to cigarette smoke (Table 1).

Olusesi et al., in a study on children in Nigeria mentioned that a history of allergy, allergy symptoms, and atopic dermatitis were risk factors for early-onset adenotonsillar hypertrophy (18). In this study, 24.4% of patients with adenotonsillar hypertrophy represented a family history of allergy, which was in line with the findings of Olusesi et al.

In another study by Kwon et al. (2007 to 2017) on 317 individuals diagnosed with adenotonsillar hypertrophy accompanied by otitis media, it was noted that the prevalence of AR was significantly higher in patients with adenotonsillar hypertrophy than control individuals. In our study, 16.6% of the participants scored higher than 7 based on the SFAR questionnaire (19). In agreement with our study, however, Kwon et al. found no significant relationship between exposure to cigarette smoke and AR.

Moreover, Said et al. (2012), in a study in Tanzania, noticed that 92.6% of patients with AR had adenoidal hypertrophy, hypertrophy of nasal subordinate turbinates, nasal polyps, tonsillitis, otitis media, and sinusitis, as the most prevalent comorbidities (20). In our study on children aged 1 to 17 years, 16.6% of patients with adenotonsillar hypertrophy had AR.

One limitation of the current research was being a single-center study. Furthermore, our sample size was relatively small.

This study was a result of a thesis (No: HRC-9814) registered at Ahvaz Jundishapur University of Medical Sciences (AJUMS) and was financially supported by the vice-chancellor of research and the Hearing Research Center of AJUMS.