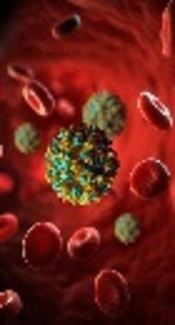 Prevalence of Hepatitis G Virus and Co-Infection with Hepatitis B Virus and Hepatitis C Virus Among Hemodialysis Patients in Ahvaz, Iran

Blood samples were collected from patients on hemodialysis during January to July, 2016. RNAs were extracted from sera and cDNA was prepared using the kit. The nested-polymerase chain reaction (PCR) and sequencing of positive samples were carried out to determine hepatitis G virus genotypes. In addition, to evaluate the co-infection of HGV with hepatitis C and hepatitis B virus infections, the sera of all the individuals were tested for hepatitis C virus antibody and HBs-Ag by enzyme linked immunosorbent assay (ELISA) assay.

The present study showed that patients, who used the hemodialysis devices in this city, were infected with Hepatitis G, hepatitis B, and hepatitis C viruses. The data indicates that duration of dialysis is significantly related to infection of Hepatitis G virus. Therefore, it is critical to control the sterility of these equipment for intercepting cross-infectivity.

Hepatitis G virus was firstly reported by Abbott laboratory researchers in West Africa. This agent was isolated from non-A-E hepatitis patients. They showed that genome sequence of this virus was similar to GBV-A and GBV-B isolated from primates. Hence, they called it GBV-C (1). This virus was also found by Genelabs technologies group when analyzing the samples from hepatitis patients, and was named hepatitis G virus (1). Recently, it was found that this virus was a new genus called Pegivirus from the Flaviviridae family. Therefore, it was named human Pegivirus (HPgV) (1).

This virus is an enveloped RNA virus with a single chain RNA structure of positive polarity with a size of 9.4 kb, belonging to the Flaviviridae family (1, 2). The viral genome comprised of a single open reading frame (ORF), encoding ~3000 amino acids, which included some structural (E1 - E2) and non-structural (NS2 - NS5B) proteins (3, 4). By comparing the HGV and HCV genomes (both are in the same family), it seems that HGV is a hazardous agent and can cause hepatic diseases (5, 6). Surprisingly, some researches asserted that HGV was isolated from persistent and fulminant hepatitis samples, while the other hepatitis agents were not detected (7).

It was illustrated that HGV is transmitted via person-to-person, mainly by the parenteral routes, especially individuals with multi-blood transfusion. Among these patients, those on hemodialysis (HDs) are at high risk of infection with HGV (8, 9). In addition, another high-risk population acquiring HGV infection is individuals infected with hepatitis B virus (HBV) (10, 11) or hepatitis C virus (HCV) (12). Some studies showed that co-infection of HBV and HCV with HGV causes acceleration of chronic illness and an increase in the severity of the disease (7).

Due to sharing of dialysis machines among patients with HD, the transmission risk of hepatitis viruses to these people is at a high level. Hence, for more cautious use of these devices, detecting HD patients infected with hepatic diseases seems to be necessary to determine the risk of transmission of these viruses to the uninfected patients. In this regard, evaluating the prevalence of the hepatitis viruses in patients with HD is also essential. Furthermore, testing the sterility of HD devices after use for these patients should be carried out under strict laws.

With this purpose in mind, an epidemiological study was conducted to determine the prevalence of HGV and its co-infection with HCV and HBV infections in HD patients at dialysis units of Ahvaz hospitals, affiliated to the Ahvaz Jundishapur University of Medical Sciences, Ahvaz, Iran. Ahvaz is the capital city of Khuzestan Province with roughly two million individuals and a tropical climate. It merits attention that Ahvaz is a touristic city located in the south-west region of Iran.

The aim of this study was to determine the prevalence of HGV among hemodialysis patients in Ahvaz and its co-infection with HCV and HBV patients.

This epidemiological study project was approved by the ethics committee of Ahvaz Jundishapur University of Medical Sciences (Ethic code: IRAJUMS.REC.1394.569). The ethic consent was obtained from each HD patient.

The nested PCR was carried out using 4 primers conserved in the 5’ un-translated region of genomic HGV (21). The reaction mixture contained 2.5 µL of PCR buffer (Roche), 0.3 mmol of dNTP, 0.125 µL of enzyme (taq DNA polymerase 5 unit, Roche), 1.5 mmol of MgCl2, and 1.5 pmol/µL of primers (nucleotides 102 to 121 as Fhg1 contained GCCAAAAGGTGGTGGATGGG as the forward primer, and nucleotides 457 to 477 as Rhg1 contained CGGAGCTGGGTGGCCCCATGC as the reverse primer) and water up to 25 µL. For the second round, 1 µL of PCR products of the first step of PCR, was utilized for the second step of PCR as the template. For the second round, the reaction mixture and PCR thermal condition were carried out the same as the first round PCR and the following primers were used: Forward primer: Fhg2 TGGTAGGTCGTAAATCCCGG, and reverse primer: Rhg2 TGGTCCTTGTCAACTCGCCG. Polymerase chain reaction reactions were performed using a thermocycler (Bio-Rad, Hercules, CA, USA). Durations and temperatures used in both steps of PCR are shown in Table 1.

This project, registration number 94111, was approved by the ethics committee of the Ahvaz Jundishapur University of Medical Sciences. Ethical consent was obtained from each HD patient.

The sera samples were collected via the venoject method from 100 randomly selected HD patients, who were registered for dialysis at Golestan and Razi hospitals of Ahvaz city, Iran, during February to December 2016. Sampling was carried out before dialysis. The sera of all the patients were tested for HBsAg and anti-HCV antibody, using enzyme linked immunosorbent assay (ELISA) kits (Dia. Pro Kit, Italy), based on the manufacturer’s manual.

Number of samples (100) was estimated, according to Morgan’s table. The effects of three factors, including gender, age, and duration of hemodialysis (DHD) on HGV were analyzed using the GLM procedure of the SAS software (version 9.1).

Analysis was followed as:

Hijk: the phenotype of the HD patients for HGV disease (infected/non-infected)

Aj: Age as a covariate factor

Dk: Duration of Hemodialysis (DHD) as a covariate factor Table 2. The Characteristics of Hemodialysis Patients Infected with GBV-Ca

Table 3. Demographic Characteristics of the Patients on Hemodialysis

Due to the sharing of dialysis machines among patients on HD, the transmission risk of the hepatitis viruses to these people is at a high level. Hence, for more cautious use of these devices, detecting patients on HD infected with hepatic diseases seems necessary to determine the risk of transmission of these viruses to uninfected HD patients. In this regard, evaluating the prevalence of hepatitis viruses in HD patients is essential. Furthermore, testing the sterility of HD devices after use for these patients should be carried out under strict laws.

With this purpose in mind, an epidemiological study was conducted to determine the prevalence of HGV and its co-infection with HCV and HBV infections in patients on HD at dialysis units of Ahvaz hospitals, affiliated to the Ahvaz Jundishapur University of Medical Sciences, Ahvaz, Iran. Ahvaz is the capital city of Khuzestan province with an approximate population of two million and a tropical climate. It merits attention that Ahvaz is a touristic city, located in the south west region of Iran. The diagram illustrates the prevalence of hepatitis G virus, hepatitis C virus and hepatitis B virus infection among hemodialysis patients of hospitals in the Center of Ahvaz.

Transmission of hepatitis viruses to HD patients is a worrying problem. In this regard, identifying patients on HD infected with hepatic diseases is an essential measure. The present study was carried out to determine the prevalence of hepatitis (G, C, B) infections among patients on HD in Ahvaz city of Iran. The results showed that a number of patients on HD were infected with HGV in the statistical population analyzed in this research. As a matter of fact, when comparing HGV prevalence between Ahvaz city and other cities of Iran and different regions around the world, it was observed that HGV outbreak was moderate. For instance, the prevalence of HGV in patients undergoing kidney transplantation was 24% in Italy (22). The frequency of HGV in patients undergoing HD was 50% in Germany (23), 12.8% in Brazil (24), and 4.5% in Japan (25). The prevalence of HGV among HD patients varied from 3.15% to 57% in different regions of the world, 3.1% to 15% in Japan, 11.5% to 20% in USA, and 6% to 57.5% in Europe, and 55% in Indonesia (11). The results were in agreement with findings reported by Watanabe MA in Brazil (24).

The present study revealed that the prevalence of HGV infection was moderate among the HD patients of Ahvaz city in comparison with other regions of Iran. In addition, some HGV-positive patients were co-infected with HBV and HCV in this region. Meanwhile, the duration of the HD period had a significant correlation with infectivity. Hence, managing the decontamination of the HD devices after use for these positive hepatitis patients should be carried out under strict laws to prevent cross-contamination among HD patients in this city.

This study with project number 94111 was financially funded by the infectious and tropical disease research center, the health research institute, the Ahvaz Jundishapur University of Medical Sciences, Iran. The authors would like to appreciate the staff at the virology department of the Ahvaz Jundishapur University of Medical Sciences, Ahvaz, Iran. Moreover, the authors are grateful of Mr. Mohsen Aali and Mrs. Shahla Karimi Naghlani for the data analysis at the Razi vaccine and serum research institute.

Copyright © 2018, Jundishapur Journal of Chronic Disease Care. This is an open-access article distributed under the terms of the Creative Commons Attribution-NonCommercial 4.0 International License (http://creativecommons.org/licenses/by-nc/4.0/) which permits copy and redistribute the material just in noncommercial usages, provided the original work is properly cited
download pdf 567.50 KB Get Permission (article level) Import into EndNote Import into BibTex
Number of Comments: 0