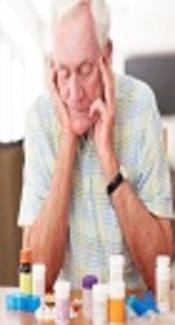 One of the most important problems of the elderly with chronic diseases is lack of medication adherence that imposes huge costs on every country health care system.

The aim of present study was to examine effective determinants on medication adherence in elderly patients with chronic diseases.

Aging is a global phenomenon that in the near future will be proposed as one of the public health challenges in the world, especially in developing countries (1). Ageing is an inevitable truth and critical period of human life. It is a natural and physiological process, which is time dependent and stared from birth and continued until death (2, 3). The age of ageing is considered 65 years in developed countries and 60 years for developing countries (4). The number of elderly people is quickly growing in the world, Therefore, today there are more than 600 million elder people all around the world, which is predicted to double until 2025, and in 2050 there will be two billion people, with the majority of them living in developing countries (5). The aging phenomenon in Asians occurs faster than western countries (6). In addition, Iran is no exception as one of the Asian countries. Iran is at the of demographics transition from youth to old age. A total of 6.8% of the Iran’s population is elderly people, which by 2030 it will become 10 million of the total population (7). By changing the demography and increasing the aging population around the world, the burden of chronic diseases is rapidly increasing (8). A study shows that at least 80% of elder individuals have chronic diseases (9).

Little has been documented on the cause of poor compliance; therefore, this study was conducted to investigate influencing factors on medication adherence with using illness perception. It may be beneficial for health care providers to pay attention to patients’ illness perceptions, including their negative emotional symptoms, in order to improve their drug adherence.

In addition, due to the complex nature of lack of medication adherence and the importance of tenaciously care in elderly patients with chronic diseases, this issue needs to be investigated. For elderly people with chronic diseases, non-adherence to medication regimens can result in the increased use of medical resources, such as hospitals, physician visits, and unnecessary treatment. Furthermore, non-adherence to medication regimens may also result in therapeutic failure. Consequently, in elderly individuals suffering from chronic diseases, medication nonadherence is a growing concern to health care providers as well as health care systems, due to the mounting evidence that it is prevalent and associated with adverse outcomes and higher costs of care (18).

The aim of present study was to examine the effective determinants on medication adherence in elderly patients with chronic diseases.

This cross-sectional study was conducted in Qom, a city in the center of Iran, in 2016. The study population included all hospitalized elderly patients with chronic diseases (cardiovascular disease, diabetes, asthma, and kidney failure) in Shahid Beheshti and Kamkar hospital in Qom city. A total of 100 patients aged 60 and older in the mentioned hospitals were selected by using simple sampling. The inclusion criteria to the study were: lack of cognitive problems, had detected chronic diseases with history of more than 6 moths, the ability to communicate in Farsi, and consent to participate in the study. Verbal informed consent for the study was obtained from all the selected patients. The ethics committee of the Qom University of Medical Sciences to No. IR.MUQ.REC.1395.86 approved this study. After receiving permission from Qom University of Medical Sciences and to the officials of health and education centers, permission required for the study was received. Every day one of the researchers refer to the sections and aforementioned clinic for collecting data, and after expressing the aim of study to the patient and getting their consent, the patient was given a questionnaire. If the patient, due to illiteracy was not able to complete the questionnaire, the questions were read by the researcher for the patient to answer; medical information was extracted from patients records. Data collection tools in this study included a questionnaire that consisted of four parts, which was completed by interviews.

The second part of the questionnaire was assessing the perception of the disease in order to measure it used from the brief from of the brief illness perception questionnaire. This questionnaire has 9 items and was designed based on the revised form of the same questionnaire by Broadbent et al. (19). Each item measured a component of the patient’s perception. Five items measures cognitive reactions to disease that includes perception of consequences, duration of illness, personal control, treatment control, and recognizing the signs. Two items measures concerns about disease, emotional reactions to disease, and on item the ability to understand disease. Items five have been open responses and questioned three causes of diseases. The range of scores in the first eight items is 1 to 10. Cronbach’s alpha for this questionnaire reported 0.8 and test- retest reliability coefficient within 6 weeks for different questions reported from 0.42 to 0.75.

The third part was about medication adherence that was examined by using Morisky medication adherence scale (MMAS- 8). It has seven items with two scores (yes 0, and No 1 score) and one items with five scores (Never = 0, rarely = 1, sometimes = 3, often = 3 and always = 4 scores). Scoring up to six is considered as a desirable medication adherence (20). Moharamzad et al. (21), approved the validity and reliability of the Iranian version. Internal consistency was acceptable with an overall Cronbach’s coefficient of 0.697 and test-retest reliability showed good reproducibility.

In addition, in the forth section of depression and anxiety of patients were assessed by hospital anxiety and depression scale (HADS). This scale has 14 items; seven items reviews anxiety and seven items review depression. Each item is scored in multiple choice (almost never = 1, most of the time = 2, almost always = 3). Finally, according to the total 21 points in each section, a score higher than eight in each section are considered as anxiety and depression. Psychometric properties of the HADS were satisfactory. Cronbach’s alpha coefficient (to test reliability) has been found to be 0.78 for the HADS anxiety sub-scale and 0.86 for the HADS depression sub-scale. Validity performed using known groups comparison analysis showed satisfactory results (22).

Data were analyzed using SPSS software version 16 by Kolmogorov-Smirnov test, independent t-test, chi-square, and univariate and multiple logistic regression in order to controlling demographic, clinical, and mental variables. Significant level in all of statistical tests was considered less than 0.05.

The results of the present study showed that the average age of the participants was 65.4 ± 5.2 and 51 were female. More than half of the elderly (n = 72) were illiterate or had an elementary education; most of them were married (n = 72). A total of 83% of individuals were living their home. Only 29 people were employed. The mean and standard deviation (SD) duration of disease was reported 8.58 ± 8.02 in a year. In Table 1, the demographic characteristics of people in the study have been described.

a Values are presented as No. or Mean ± SD.

Based on our study findings the only main significant medication adherence determinative after controlling demographic, clinical, and psychological variable was Identify. This means that elderly who had more recognition of symptoms and had experienced symptoms and had more desirable medication adherence. This finding was consistent with the results of a university in America, therefore, those who had little recognition of bronchial asthma symptoms had less medication adherence (13), however, this finding had an inconsistency with another study in Libya. In that study, people who had experienced diabetes symptoms had lower medication adherence (23). This contradiction can be justified by the reasons that in the Iranian culture patients go to the doctor if they experience symptoms and they try to control their symptoms by compelling prescribed treatment. It seems that in Iran, as long as people do not experience symptoms of a disease, they are not doing the necessary treatments. In fact, based on the perception of people regarding the symptoms, severity of them, and beliefs about the possible symptoms consequences, reactions of people about treatment will be change (24). Therefore, it seems that in order to implement effective interventions for increasing medication adherence in recognition the diseases, special attention to culture should be given. The results of this study showed that another effective illness perception variable on medication adherence was personal control, in another words, the elderly who believes they can manage and control their disease had more medication adherence. According to the results of studies, high personal control over the diseases will lead to greater medication adherence (19, 25). Like to our study, Mosleh’s study (26) results in Jordan showed that patients with coronary artery disease, which is believed to have a greater ability to control their disease have a greater motivation to comply with the desirable treatment the results of this study with other results of the study about asthma, diabetes, and cardiovascular were consistent (27, 28). In people with asthma (13) and high blood pressure those who had more control over their diseases could improved their lifestyle and avoided from diseases that exacerbated them. This result showed that effective interventions in order to strengthen personal control items can facilitate the lifestyle modification and will upgrade the ability of people in self-management skills (29).

This study also had limitations including being cross-sectional, which does not provide a cause and effect relationship between variables. The data was collected by self-reporting, which may not reflect the actual performance of subjects. In addition, non-random sampling and limited sample size in this study reduce the generalizability of findings; performing this study with a larger sample size can be effective in promoting these limits. There are many variables that may have an effect on medication adherence, which has not been studied in our study, therefore, recommended future studies are done by more variables such as confronting strategies, self efficacy, fear, and etc.