Effects of Local Thermotherapy on Chest Pain in Patients with Acute Coronary Syndrome: A Clinical Trial 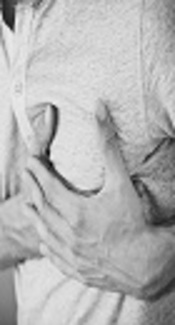 The chest pain is a very common complaint among patients with acute coronary syndrome (ACS). The local thermotherapy can reduce or relieve the heart pain by suppressing metabolites as pain mediators.

This study aimed to determine the effect of local thermotherapy on the chest pain in patients with ACS.

This clinical trial was conducted on 78 patients with ACS hospitalized in the ICU of Golestan Hospital of Ahvaz in 2016. Based on the sample size and inclusion criteria, and by a convenience sampling, the eligible patients were enrolled and randomized into two equal-sized groups, namely control and intervention, each containing 39 participants. During the local thermotherapy sessions, the patients received local heat by using a hot pack warmed to 50°C for five days. The control group only received the routine treatment. Data collection instruments included a demographic questionnaire and the Numerical Rating Scale (NRS). The NRS was completed by the participants before the intervention and five days after it. Data were analyzed using the descriptive tests, correlation coefficient, independent t-test, Chi-square, and logistic regression in SPSS 20.

The mean pain severity in the case group before the intervention was 3.22 ± 0.86 and after the intervention, it decreased to 2.61 ± 0.7, indicating the effect of local thermotherapy. However, it was not statistically significant (P > 0.05). There was no significant relationship between age, gender, diabetes, hypertension, and hyperlipidemia, and the pain severity in this study (P > 0.05). Logistic regression analysis showed that women experienced more pain than men did.

This study suggested the slight effectiveness of local thermotherapy in reducing the severity of pain in these patients. As a result, further studies are recommended.

A significant number of hospitalized patients at hospitals are patients with heart disease, especially patients with acute coronary syndrome (ACS) (1). The ACS is one of the manifestations of coronary artery disease, which results in the death of the cell as a result of the disparity between the intake of oxygen and the required oxygen due to reduced coronary blood flow (2, 3). Approximately, 1.1 million patients are admitted to hospitals each year in the United States for the diagnosis of ACS, of which more than one-third are women (3). The syndrome represents a range of early-onset deaths (30 days) ranging from one to 10% and recurrence rates of 5% - 15% during the first year (4-6). In Iran, the ACS is the most common cause of death, accounting for about 46% of the deaths (5).

The aim of pain treatment in patients with ACS is to restore myocardial blood flow, prevent or minimize cardiac damage, and prevent heart rate. However, increased blood pressure and the myocardium need for oxygen are some of the psychosocial problems of patients due to hospitalization (7-9).

Since the pain relief is the core of nursing care, the importance of playing this role by nurses who have a key role in pain management is more highlighted (10, 11). In addition, nurses spend time more than other medical staff with patients and they always decide on pain evaluation and management, specifically in ICUs (12).

Medicines such as morphine and non-pharmacological drugs are used to control the pain of coronary patients. Due to adverse drug reactions and differences in patient response, it is important that non-pharmacological methods along with analgesics be used to reduce pain and anxiety in patients because of their fewer complications and more access and effectiveness (7, 13).

Today, medical science tries to reduce medicine consumption or replace it by non-medicinal methods. This is because non-pharmacological techniques are associated with fewer side effects, and are more effective and accessible. Thermotherapy is a non-medicinal pain management technique, which can improve the signs and symptoms of these patients through different mechanisms (14).

Today, thermotherapy can act in two different ways for pain management: either on the surface tissues (skin) or in deep tissues (muscles) (15). Thermotherapy improves the symptoms by disposing the toxic metabolites, such as histamine and bradykinin, from the affected region, vasodilation, increasing blood flow to the inflamed and damaged area, and reducing sympathetic activity (14, 16). In a study, Nadler et al. showed the greater effectiveness of thermotherapy compared to ibuprofen and acetaminophen pills in relieving back pain (17).

There are several methods for delivering thermotherapy to the body, including hot packs. These packs are specifically heated pouches that in addition to delivery of heat and increase of blood flow in the region, allow the heat to penetrate into deeper tissues (18). In a study, Uchiyama-Tanaka showed that the application of hot packs in hemodialysis patients with acute cardiac disease reduced brain natriuretic peptide and normalized perfusion (19). In a study conducted by Mohammadian et al., the use of hot water pouch locally in the posterior part of the chest of patients with ACS was associated with decreased pain (5). Takayama et al. (20), Yildirim et al. (21), Yaghobi (18), Behmanesh (22), and Mohammadian (5) also reported the effectiveness of local thermotherapy in relieving pain in patients.

In contrast, Cui and Sinoway reported the negative effect of thermal stress on sympathetic nerves by increasing their activity in patients with chronic heart failure (23).

Regarding the condition of patients with ACS, the use of the sauna and thermotherapy in the acute stage of the disease is not possible (7). The symptoms may improve with local thermotherapy using hot packs, and the effects may be similar to the effects of a whole-body thermotherapy.

Regarding the scant studies of local thermotherapy and its advantages (e.g. improvement of circulation, reduction of pain, improvement of physiological indices, universal accessibility, and ease of use), we aimed to determine the effect of local thermotherapy on the chest pain in patients with ACS hospitalized at Golestan Hospital in Ahvaz in 2015.

This clinical trial with code IRCT20161122031017N2 was registered in 2017. The statistical population included all patients with ACS hospitalized at the ICU of Ahvaz Golestan Hospital.

78 patients were selected using a purposive sampling strategy based on the difference between the means, the randomized complete block design with four factors, and inclusion criteria. The participants were then equally placed in the intervention or control groups.

The inclusion criteria were patients aged over 30-years-old, without addiction, without a history of psychological, muscle, and gastrointestinal problems, without a decreased level of consciousness, and without chest wound and scar.

The exclusion criteria were an unwillingness to participate and an incomplete questionnaire.

In the Numerical Rating Scale, patients were asked to rate their pain on a scale from 0 to 10, where 0 represents “no pain” and 10 represents the “worst possible pain.” The error rate of this scale is approximately 2%. The NRS is often used in studies of pain, e.g. by Sadoughi and Akkashe (24), and Jensen and Karoly (25). There is much evidence supporting the NRS validity for pain measurement, regardless of the type of pain and diversity of the population (24-26). Moreover, the content analysis was used to evaluate the scientific validity of the demographic questionnaire. To this end, the researcher prepared the initial questionnaire by deciding on the research items and conducting a literature review. Then, the opinions of 10 faculty members of the Nursing and Midwifery Faculty of Ahvaz University of Medical Sciences were obtained and used to introduce the required modifications for developing the final version of the questionnaire.

For observing the ethics of research, an ethical approval was obtained with the number of IR.AJUMS.REC.1396.144 from the University and a permission from the heads and officials of Ahvaz Golestan Hospital. After expressing the study objectives to the subjects, they were ensured that the confidentiality of their personal information would be maintained. The ethical principles of existing resources were also respected. The two groups received the routine care according to a cardiologist’s order.

In addition to the routine care, the intervention group received local thermotherapy with hot packs warmed to 50°C one hour after admission to the Heart Unit, following the administration of NRS. The 20-minute-length intervention was applied to the posterior chest by a nurse once a day. Thermotherapy was administered for five days, during which analgesics were given to patients in case of severe pain according to the specialist’s order. Before the intervention, the pain score was recorded in case of the occurrence of heart pain. In addition, the pain score was recorded during the intervention period (five days) until 12 hours after the last session.

The NRS was also administered to the control group immediately after the expression of pain before and after the routine care. It is worth noting that the hot pack temperature was adjusted to 50°C. Since studies have shown the uselessness of local thermotherapy at a temperature of lower than 45°C, which could be reached after 23 minutes, thermotherapy sessions in the current study lasted for 20 minutes (27).

The mean and standard deviation were used for describing quantitative variables, and frequency and percentage for qualitative ones. First, the relationship between each variable and the pain intensity variable was separately evaluated after the intervention. Then, variables with P < 0.2 were introduced to the multivariate model. Regarding the significant intergroup difference in the pain intensity before the intervention, the variables group therapy and pain intensity could not be included before the intervention. Therefore, the patients were categorized into two groups based on the mean pain intensity, and the univariate and multivariate analyses were conducted separately in these two subgroups. The independent t-test, paired t-test, Chi-square test, and Pearson correlation coefficient were used for univariate analysis and the multiple linear regression was used for multivariate analysis. All analyses were conducted in SPSS 20.

Table 1. Frequency and Mean of Demographic Variables by Intervention and Control Groupsa

b Based on chi-square and independent t-test.

b Based on paired t-test.

Using paired t-test, there was no significant difference between the two intervention and control groups before and after the intervention with respect to the median pain score of 3.6 (P > 0.05). However, the mean pain severity in each group alone with respect to the median of 3.6 was accompanied by a significant decrease in pain severity (P < 0.001) (Table 3).

b Based on paired t-test.

The application of local thermotherapy to the chest of patients with ACS was accompanied by the reduced severity of pain; however, this reduction was not significant. It is recommended to conduct more studies with a greater sample size and placement of hot pack on both anterior and posterior chest for pain reduction.

This paper is the result of a thesis approved by Ahvaz Jundishapur University of Medical Sciences, No. B-9624, which was supported by the vice-chancellor for Research and Technology of Ahvaz Jundishapur University of Medical Sciences. Hereby, the researcher thanks the authorities and staff of Ahvaz Golestan Hospital’s ICU, participating patients, and all of the other contributors.

Copyright © 2018, Jundishapur Journal of Chronic Disease Care. This is an open-access article distributed under the terms of the Creative Commons Attribution-NonCommercial 4.0 International License (http://creativecommons.org/licenses/by-nc/4.0/) which permits copy and redistribute the material just in noncommercial usages, provided the original work is properly cited.
COMMENTS