Relationship Between Self-Compassion and Depression in Cancer Patients Referring to the Oncology Ward of Shahid Baghaee Hospital in Ahvaz, Iran 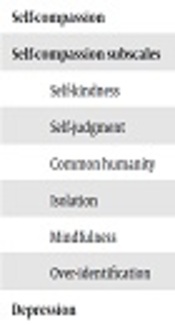 Depression is one of the most common psychiatric diseases in cancer patients. Few studies showed that self-compassion is a reliable predictor of mental health.

This study aimed to determine the relationship between self-compassion and depression in cancer patients referring to the Oncology Ward of Shahid Baghaee Hospital in Ahvaz.

This correlational study was conducted on 106 eligible adult cancer patients who referred to the Oncology Ward of Shahid Baghaee Hospital in Ahvaz. The patients were chosen using convenience sampling. Data were collected by a demographic questionnaire, the Beck depression scale, and the self-compassion scale (SCS-LF). Data were analyzed by SPSS 20 using descriptive statistics and Pearson’s correlation coefficient.

As the results of the present study indicated the high prevalence of depression in the studied patients and a negative relationship between depression and self-compassion, it is necessary to perform psychological interventions with an emphasis on compassion component to reduce depression in these patients.

Cancer is the second cause of mortality in human populations after cardiovascular disease (1). Cancer includes a broad spectrum of diseases (over 270 types of diseases) (2). It is currently a major health issue in Iran and around the globe. According to estimates, one out of every five people is diagnosed with a form of cancer. Statistics on cancer in Iran follow the same rule (3).

Depression as a mood disorder is one of the most common psychiatric illnesses in cancer patients (3.4). It is characterized by a lack of pleasure, avoidance of friends or family, lack of motivation, intolerance to failure, reduced libido, decreased or increased appetite and weight, reduced energy, early fatigue, and sleep disorders (4). According to a report from the American Cancer Society, more than 25% of people with various types of cancer have clinical signs of depression (5). Depressed cancer patients usually have reduced health-related quality of life and report high levels of fatigue (6).

Self-compassion is the healthy form of self-sufficiency, which expresses the acceptance of undesirable aspects of self and own life. This concept consists of three main components of being kind to yourself, a sense of general self, and balanced awareness of personal excitement (7). The first component indicates that whenever a person becomes aware of his inefficiency, he tries to love and understand his existence. The second component is to recognize that pain is a common inevitable aspect of life experiences of all human beings. Ultimately, self-compassion represents a balanced awareness of self-emotions, including the ability to dealing with painful thoughts and feelings without exaggerating or feeling sad and regrettable for self. A high level of self-compassion can protect a person against disease and even death (8).

Several studies have shown that compassion by its own is a powerful predictor of mental health and increasing self-compassion improves psychological well-being over time (9). The study by Golpour et al. showed that cognitive self-compassion training and emotion-focused therapy were effective in improving the quality of life of depressed students (8). The results of a study showed that participants enjoyed compassion with the two main qualities of kindness and action. Participants stated that self-compassion is important in their experiences and helps them deal with depression and anxiety. Nevertheless, the participants believed that it was difficult for them to have self-compassion (10).

The literature lacks extensive studies in this area and there is no clear evidence of this issue, suggesting the need for further investigation to determine the relationship between depression and self-compassion in people with cancer. Therefore, due to the high prevalence of cancer and depression disorders in cancer patients and the need to determine other factors related to depression, the researchers intend to conduct a study aimed to determine the relationship between self-compassion and depression in cancer patients referring to the Oncology Ward of Shahid Baghaee Hospital in Ahvaz, Iran.

This correlational study was conducted on 106 cancer patients undergoing surgery, chemotherapy, or radiotherapy in the Oncology Ward of Ahvaz Shahid Baghaee Hospital in 2017. The eligible cancer patients were enrolled in the study by using a convenience non-probable sampling method. The sample size was determined using the following formula (Z = 0.95, P = 0.17, and d = 0.05):

The inclusion criteria included cancer patients diagnosed and confirmed by a specialist, undergoing surgery, chemotherapy, or radiation therapy, being able to read and write, being willing to participate in the study, and being free from mental and cognitive diseases. Subjects with incomplete questionnaires were excluded from the study. Data were collected after taking permission from the officials of the selected hospital, informing the participants about the purpose of the study, ensuring them about the confidentiality of their information, and asking them to sign the written consent form.

3.2. Validity and Reliability of the Study Tools

The validity of the Persian version of the Beck Depression Inventory was confirmed and its reliability was reported to be more than 0.6 (13). According to Neff, the SCS has good internal consistency reliability (0.92), as well as good test-retest reliability (r = 0.93) over a three-week interval (12). Golpour et al. reported Cronbach’s alpha coefficients for the total scale and its subscales in the range of 0.65 to 0.92 (8).

SPSS version 20 software was used to analyze the data. Descriptive statistics including frequency and percentage were used to describe the data. Independent t-test, ANOVA test (for the relationship between demographic variables and the main variables), and Pearson correlation coefficient were used for normally distributed data. In the case of non-normality of data, the Mann-Whitney, Kruskal-Wallis, and Spearman tests were used.

The Ethics Committee of Ahvaz Jundishapur University of Medical Sciences (IR.AJUMS.REC.1396.176) approved the study. The researchers were trained on ethical issues such as respect for the right to participate voluntary, obtaining consent to participate in research, and informing the participants about the purpose of the study.

aSignificant at the level of below 0.05.

Table 2. The Mean Scores of Depression and Self-Compassion in Studied Cancer Patients

This study aimed to determine the relationship between self-compassion and depression in cancer patients referring to the Oncology Ward of Shahid Baghaee Hospital in Ahvaz, Iran. The results showed that self-compassion and depression in the studied patients were at a moderate level. In a study conducted by Alizadeh et al. on women with breast cancer, the results showed that self-compassion was at a moderate level in the studied sample, which corroborates our results (14). In the study by Park et al., although anxiety symptoms were highly experienced by young women with newly diagnosed metastatic breast cancer, depression was less common (15).

Our findings showed that there were significant reverse correlations between depression and self-compassion and its subscales, except for the feeling of human commonality. It means that the lower is self-compassion, the higher is depression prevalence in the studied patients. In this regard, the results by Rajabi et al. indicated a negative relationship between self-compassion and depression (16). Other studies conducted on cancer patients demonstrated that higher levels of self-compassion had significant relationships with lower depressive and stress symptoms (17-19), higher mental health and quality of life (18, 19), and higher resilience to breast cancer (14). According to a literature review by Sirois and Rowse, self-compassion is in connection with adaptive coping, lower stress and distress, and the practice of important health behaviors in chronic illness populations (20). Arambasic et al. in their study concluded that self‐compassion training may be useful for enhancing psychological adjustment in long‐term breast cancer survivors (21). In other words, self-compassion can help chronic patients, especially cancer patients, to maintain their mental health and thus, their general health, more effectively. Self-compassion works by creating some positive attributes such as patience, tolerance, self-esteem, and balance of excitement as an antidepressant. In fact, self-compassion can act as a protective factor against depression. Through compassion and kindness toward oneself and others and accepting unpleasant events, it can help improve depression and shorten the course of treatment (16). Therefore, it seems that with strengthening the sense of self-compassion, one can expect reduced depression in cancer patients.

The current study has limitations that require attention. An important limitation is the study’s correlational cross-sectional nature that limits to establish a causal relationship. Our hypothesis based on the evidence was that higher self-compassion leads to a lower risk of depression in cancer patients; however, our results only indicated a relationship between the two variables and did not indicate the direction of the relationship. In order to determine the causal relationship between the two main studied variables, future studies should employ a longitudinal design to assure that the direction of causation is as hypothesized. The second limitation is the use of convenience sampling in a single clinical setting (which is, of course, the most important referral unit for cancer patients in the city), which can limit the generalizability of the findings to other populations.

The results of the present study indicate that self-compassion and depression were at a moderate level in cancer patients and there was a negative correlation between depression and self-compassion. Therefore, it is necessary to perform psychological interventions, with an emphasis on compassion component, to reduce depression in cancer patients. The identification of other depression-related components can help increase the current knowledge of depression in patients and design effective nursing and psychological interventions.

This paper is the result of a research project approved and financially supported by the Student Research Committee of Ahvaz Jundishapur University of Medical Sciences (95s69). We appreciate the financial support and assistance of all patients and nurses of Shahid Baghee hospital, Ahvaz, Iran.