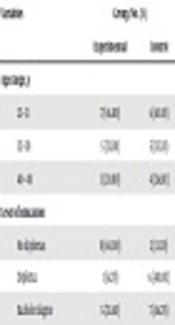 Multiple sclerosis (MS) is a disabling neurological disorder, which in addition to neuro-motor disorders, accompanies a variety of symptoms, such as anxiety, asthenia, and reduced levels of problem-solving, and leads to a number of physical and mental disorders. This is while rumination is among psychological problems that can negatively affect MS patients’ mental health. Rumination is known as a permanent engagement in a thought or an issue and is categorized as a conscious thought focused on a specific topic.

This quasi-experimental study was followed by a pretest, post-test, and follow-up design with a control group. The current study had a statistical population including all patients with MS, who referred to Sistan and Baluchestan MS Community from December 2016 to February 2017. Among them, 30 patients were selected as the sample using the convenience sampling method and were randomly assigned to a control group and an experimental group (each including 15 patients). Eight 60-minute sessions of mindfulness-based stress reduction group therapy were conducted on the experimental group. A post-test was carried out after completing all sessions and a follow-up was performed a month later. Yousefi rumination scale was used as the data collection tool. An analysis of covariance was applied to analyze the obtained data.

The results indicated that mindfulness-based stress reduction group therapy reduced rumination in patients with MS in the post-test and follow-up (P < 0.05).

Authorities are recommended to apply the mindfulness-based stress reduction group therapy to improve rumination among patients with chronic diseases.

Multiple sclerosis (MS) is a chronic, progressive, and disabling disease that destroys the nerve cells of the myelin sheaths in the central nervous system (1, 2). In 2001, the National MS Association announced that more than 1.2 million people worldwide are affected by this disease. Nowadays, the number of MS patients is increasing such that this disease is considered the third major cause of disability in the United States and nearly 50 000 people have MS in Iran (3). In Sistan and Baluchestan, its minimum prevalence rate is six per 100 000 population. Multiple sclerosis peaks in people aged 20 to 30 years (4). Its prevalence rate is higher in females compared to males (5). Given this disease’s high mortality rate, huge costs imposed on patients, and various issues related to it, paying attention to the patients affected by it and reducing their problems and symptoms are essential.

Rumination is among psychonervous abnormalities that influence MS (6). Rumination is referred to as persistent and recurring thoughts associated with a common issue. These thoughts enter consciousness involuntarily and divert people’s attention from their current goals (7). Rumination is a cognitive mechanism that binds stressful life events with depressive symptoms and anxiety (8). Many people believe that when they become sick, they have to try to focus on their inner strengths because they think that such a concentration will give them the insight to find a solution to their problem (9).

Recent studies have demonstrated that the nature of these thoughts, no matter how negative they are, is not a problem per se, rather the way a person reacts to them leads to aggravation of these negative thoughts. Hence, mindfulness is a technique that applies a patient’s ability for cognitive reconstruction (10). Mindfulness originates from extensive research aimed at identifying cognitive factors and processes, which predict depression relapses and it was initially introduced by Segal et al. in 1995 (11). Mindfulness-based cognitive therapy is an integral part of mindfulness-based stress reduction therapy presented by Kabat-Zinn and Beck’s cognitive therapy. This therapy was developed as a group therapy for people, who have a history of depression (12).

A study carried out by Rostami et al. showed that there were significant diverse relationships between self-efficacy and rumination, and between mindfulness and rumination. This means that when self-efficacy and mindfulness increase by 0.23 and 0.21, respectively, rumination decreases, however, there was a significant direct correlation between self-efficacy and mindfulness by 0.56 (13). In another study, Moghtader suggested that mindfulness-based cognitive therapy was effective in reducing rumination, inefficient attitudes, and negative dimensions of negative automatic thoughts among people with anxiety disorders (14). In the same line, Heidarian et al. indicated the effectiveness of the intervention in increasing resilience and reducing rumination among cancer patients (10). Abbasi and Khademlou found that mindfulness-based cognitive therapy moderated the defectiveness/shame schema and decreased rumination, social isolation, and perfectionism in their experimental group in the post-test (15).

Given that rumination and negative stress-induced thoughts in MS patients lead to hopelessness and affect the patients’ mental health, finding suitable therapeutic interventions for modifying their problems is of significant importance. Hence, according to what was mentioned earlier, this study sought to answer the following research question:

This quasi-experimental study was followed by a pretest, post-test, and follow-up design with a control group. The current study had a statistical population, including 40 patients with MS, who referred to Zahedan MS Community from December 2016 to February 2017. Questionnaires were distributed among all MS patients. Next, 30 MS patients, who were willing to take part in the training workshop and had the inclusion criteria required for entering the study and obtained high scores on the rumination scale, were selected as the sample. Considering these patients’ scores in the rumination scale, they were randomly assigned to an experimental group and a control group, each including 15 patients. Inclusion criteria of this study were being diagnosed with MS by a neurologist, not suffering from any diseases other than MS, according to a physician’s opinion, and not undergoing any other psychological interventions. Exclusion criteria were dealing with mental disorders, like personality disorders, being unwilling to take part in the workshop and not being diagnosed with MS. Moreover, ethical considerations, including obtaining the patients’ informed consent, explaining the objectives of carrying out the study, and the freedom to leave the study, were observed. In addition, the patients’ information was kept confidential and codes were used instead of their names.

Contents and objectives of these sessions were extracted from a perspective proposed by Kabat-Zinn in 1990 (21). These sessions aimed at reducing rumination and they were held in the form of questions and answers and group discussions. At the end of each session, some homework assignments were assigned and at the beginning of each session, these assignments and topics discussed in the previous session were reviewed. The content and summary of each session are presented in Table 1.

Table 1. Summary of the Structure and Contents of the Therapy Sessions of the Mindfulness-Based Stress Reduction Therapy

This scale was developed by Yousefi in 2005. It includes 39 multiple-choice items, each of which is scored based on a scale ranging from 0 to 3. Each respondent’s score is obtained by adding these scores. Its concurrent validity was calculated using the Beck depression inventory and the Oxford happiness test. Its structural validity was assessed using a factor analysis via carrying out the varimax rotation procedure. Its differential validity was examined by an internal consistency test conducted on a clinically depressed group and a non-clinical group. Its internal consistency was calculated using the Cronbach’s alpha method and the reliability of this scale was obtained by conducting the test-retest method. Examining its concurrent validity indicated that its coefficients with the Beck depression inventory (r = 0.051) and the Oxford happiness test (r = 0.53) were both statistically significant. Moreover, results have shown that this scale had a very good internal stability with a Cronbach’s alpha coefficient of 0.92 (22, 23).

The demographic data related to the patients in the experimental and control groups are presented in Table 2. The results presented in Table 3 indicate that the mean score of rumination in the experimental group decreased in the post-test and follow-up in comparison with the control group. To study the homogeneity of variance in the main variable of the present study, Levene’s test was used. The significance level of Levene’s test for rumination is greater than 0.05, therefore, the assumption of the homogeneity of variance was confirmed.

The results presented in Table 4 demonstrate that after eliminating the effects of pretest on the dependent variable and considering the F values of rumination obtained in the post-test (F = 43.53, P ≤ 0.001) and follow-up (F = 67.02, P ≤ 0.001), it can be stated that there is a significant difference between the adjusted mean scores of the patients in the post-test and follow-up. Therefore, the research hypothesis was confirmed and it can be concluded that this change between the mean scores of the experimental group in the post-test and follow-up, compared to the control group, is the result of the intervention. According to the Eta coefficients, the highest effect on rumination was 86% in the follow-up, which means that 86% of the variances in rumination is related to mindfulness-based stress reduction therapy.

Table 4. Results of the Analysis of Covariance Conducted to Examine the Effect of the Mindfulness-Based Stress Reduction Therapy on Rumination in the Post-Test and Follow-Up

This study aimed at examining the effectiveness of the mindfulness-based stress reduction group therapy on rumination. The findings of this study showed that the mindfulness-based stress reduction group therapy, in the post-test and follow-up, decreased rumination in the MS patients. This finding is consistent with the results of several studies (10, 13-20).

To explain this finding, it can be noted that a reduction in physical and social functions following the diagnosis of a disease and the course of treating affect people’s lives. Mindfulness via the use of several techniques, like training relaxation techniques, accepting without having any judgments of the status quo, and being aware of oneself, increases awareness of the present moment, and consequently, reduces anxiety and rumination among patients. Patients with MS have to deal with a lot of problems during the course of treatment, which usually causes severe physical fatigue and imposes high expenses on these patients. In most cases, these patients are involved in rumination, related to their recoveries. In addition, this new condition, which leads to the loss of mobility, affects these patients’ appearances, identities, and self-confidence and can create psychological problems and lead to the continuation of involvement in rumination, especially when this condition is intentionally or unintentionally worsen by others in social situations. Accordingly, mindfulness aims to help a person by focusing on the present instead of the future and by increasing self-monitoring and awareness of his/her body, which may lead to a significant reduction in psychological symptoms, including anxiety and improved self-care. Training mindfulness skills and yoga, as adaptive skills, can reduce many of these patients’ problems and increase their ability to adapt themselves to their current conditions. Therefore, according to what was mentioned earlier, the findings obtained from this study related to the effectiveness of mindfulness-based stress reduction group therapy can help therapists, doctors, and counselors improve patients’ conditions. It is recommended that mindfulness-based stress reduction group therapy should be commonly used for MS patients, and authorities of MS associations of hospitals and other organizations that have direct contact with this group of patients should develop and equip mentoring mindfulness-based training workshops since they are effective and constructive measures that improve these patients’ well-being. On the other hand, positive interventions can aid people in increasing their attention to themselves and control themselves in a way that they experience low levels of stress. Successful coping with stressful factors and difficult situations can improve people’s ability to face various problems.

Limitations of this study was that the study was limited to MS patients referred to Zahedan MS Community. Caution should be exercised when generalizing the results obtained from this study.