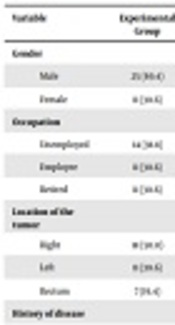 Colon cancer is the third leading cause of death globally, and mucositis is one of the complications of cancer treatment following drug therapy.

This study investigated the effect of licorice root extract mouthwash with combined mouthwash on the incidence and severity of chemotherapy-induced mucositis symptoms in colon cancer patients admitted to intensive care units (ICUs).

In this clinical trial, 72 colon cancer patients were treated with chemotherapy. A purposive random sample of patients was divided into two groups of intervention (n = 36) and control (n = 36). Patients in the control group received routinely used combined mouthwash. However, the intervention group received licorice root extract 5% from the beginning of the treatment according to the researcher’s plan. Then, the degree of mucositis and ulcer area were recorded on the first, third, and seventh days of treatment based on the WHO standard tool for measuring mucositis severity.

Cancer is a major health problem worldwide (1). Cancer deaths are expected to rise to 13 million worldwide by 2030. Cancer is the leading cause of death in developed countries and the second leading cause of death in developing countries (2). In Iran, cancer is the third most common cause of death after cardiovascular diseases and vehicle accidents (3). Colon cancer is one of the most common types of cancer and is the second most common cause of cancer death that affects both men and women in developed countries (4). The incidence of colon cancer is high in many Asian countries and more profoundly in developed and western countries (5). In 2010, it accounted for 10% of all cancer deaths in the United States, causing 50 to 60% of patients to experience metastases and more than 30% of patients with metastatic symptoms to refer to the hospital (6).

One of the most important therapeutic options for cancer is chemotherapy that uses anti-cancer agents to kill tumor cells. Chemotherapy is the cornerstone of cancer treatment and, as a systematic treatment, kills cancer cells in the furthest parts of the body (7). Several chemotherapy regimens are used to treat colon cancer, and the basis of all is 5-FU (5-fluorouracil), which is used as an effective drug in the first-line treatment for colon cancer. The main side effect of this drug in different regimens is bone marrow suppression, mucositis, and diarrhea (8). Mouth flora in a healthy person remains constant over time; however, special conditions can cause mouth flora to collapse. For example, within 48 hours of the patient’s hospitalization, this flora changes in favor of gram-negative organisms with higher pathogenicity (9). These changes can lead to the accumulation of bacteria and the proliferation of opportunistic pathogens in the oral cavity, causing general and local complications (10), such as inflammation, mouth ulcers, increased prevalence of viral, fungal, and bacterial infections, and bleeding. These complications lead to significant pain and malnutrition (11).

In patients needing intensive care, a defensive substance called fibronectin, commonly found on the surface of the teeth and mouth, deteriorates (12), and develops mucositis as a significant complication (13). The incidence of severe mucositis has been reported in more than 60% of patients receiving radiation therapy in the body as a whole and 30 to 50% of patients not receiving general radiotherapy (14). The severity of mucositis varies in the mouth from small scars with redness to severe ulcers and ruptured mucous and epithelium. Severe mucositis can cause damage to the lining of the mouth, which impairs its function and can lead to morbidity and poor quality of life of patients (15). Clinically, it can cause major problems, including many disabling symptoms, such as dysphagia, weight loss, and malnutrition during treatment (16). The prevalence of mucositis is 80 to 100% in high-dose chemotherapy, 40% in standard-dose chemotherapy, and 10 to 15% in low-dose chemotherapy (17). The only way to treat and prevent chemotherapy-induced mucositis is by observing oral hygiene and using mouthwash (18). Due to complications such as burning, allergies, bitter and intolerable taste and exacerbation of mouth ulcers, non-chemical mouthwash is recommended to use, especially herbal mouthwash (19).

Over the past few years, the use of complementary and alternative medicine has become popular (20). One of the treatments in complementary medicine is the use of herbal medicine, which has received general public acceptance due to lower side effects (21). One of these medicinal herbs is licorice, which is considered by pharmaceutical and food industries due to a large number of flavonoids (22). The natural form of this substance is useful in the treatment of mouth and digestive tract ulcers (23). A study conducted by Das et al. in 2011 found that licorice was effective in preventing and treating oral mucositis caused by radiotherapy in patients with cancer in the head and neck without any interruption in treatment (24). According to these studies and the use of complementary medicine in mucositis by patients undergoing chemotherapy, licorice can be applied to reduce the complications of chemotherapy due to its prominent anti-inflammatory symptoms.

This study aimed to compare the effect of a mouthwash prepared from licorice root extract and combination mouthwash on the incidence and severity of chemotherapy-induced mucositis symptoms in colon cancer patients admitted to ICUs.

This double-blind randomized clinical trial was conducted on 72 patients (males and females) undergoing chemotherapy in the intensive care unit of Baghaee Hospital, Ahvaz, Iran. The patients had been diagnosed by oncology specialist. The inclusion criteria for patients include an age of 18 years or older, a diagnosis of colon cancer treated with FOLFOX, and at least one episode of mucositis in previous chemotherapy. Patients who had undergone radiotherapy in addition to chemotherapy or died during the study were excluded. After obtaining permission from the Ethics Committee of Ahvaz Jundishapur University of Medical Sciences and receiving written consent from patients for the purpose of participating in the study, the patients were randomized using the blocks of six into two groups of intervention (36 patients ) receiving licorice root extract 5% and control (n = 36) receiving combined mouthwash.

The data gathering tools included a two-part questionnaire and a checklist. The questionnaire contained a part for gathering demographic information (age, sex, and education) and another part with questions on the history of smoking, history of oral and dental complications (decayed and missing teeth), the duration of chemotherapy, and the number of white blood cells. The checklist was used to determine the severity of oral mucosal inflammation based on the World Health Organization 2005 criteria that categorizes oral mucositis into five distinct grades (4 - 0). The instrument was used to determine the status of the oral mucosa, incidence, and severity of oral mucositis before and after the intervention. Content validity and reliability were obtained by evaluation of the inter-rater, with the correlation coefficient of 0.93.

The intervention group used mouthwash prepared from licorice root extract 5% prepared at the Pharmaceutical Faculty of Ahvaz Jundishapur University of Medical Sciences while the control group used a combined mouthwash (aluminum MG, diphenhydramine, nystatin powder, and lidocaine 2%). Both mouthwash solutions were administered every eight hours daily at a dose of 10 cc from the first day of chemotherapy for one week. Then, the oral mucosa of the patients was studied in this period. In this double-blind study, the researcher and the patients were unaware of the nature of the solutions.

The mean age of the patients was 12.44 ± 55.02 in the intervention group and 12.56 ± 56.47 in the control group. There was no significant difference between the two groups in terms of age (P = 0.581). There was also no significant difference between the groups in terms of gender, occupation, tumor location, Family history of cancer, education level, smoking, white blood cells, duration of chemotherapy, type of teeth, and decayed teeth (Tables 1 and 2).

Table 1. Mean ± SD of Variables in the Experimental and Control Groupsa

a Values are presented as mean ± SD.

Table 2. Comparison of Demographic Data Between the Groupsa

Most of the patients in both intervention and control groups did not develop mouth ulcers on the first day. According to the chi-square test, there was no significant difference in the incidence of mucositis between the two groups on the first day of the study (P = 0.544).

On the third day of the study, most of the patients in the intervention and control groups did not develop mouth ulcers. However, the number of patients in the intervention group who had ulcers between 1 and 5 cm in size was more than that in the control group and none of the patients in both groups had ulcers of more than 5 cm. According to the chi-square test, there was no significant difference between the two groups in this regard (P = 0.308).

Table 3. Comparison of the Incidence of Mucositis on the First, Third, and Seventh Days in the Intervention and Control Groupsa

On the third day of the study, most of the patients in the intervention group had erythema, redness, ulcers, and little ability to eat solid food. In the control group, most people had non-ulcer redness. However, based on the chi-square test, there was no statistically significant difference in the severity of mucositis between the intervention and control groups on the third day of the study (P = 0.857).

On the seventh day of the study, most of the patients in both intervention and control groups had erythema without ulcers. In the intervention group, the number of subjects without mucositis was more than that in the control group. According to the chi-square test, there was no significant difference in the severity of mucositis between the two groups (P = 0.607; Table 4).

Table 4. Comparison of Mucositis Severity on the First, Third, and Seventh Days in the Intervention and Control Groupsa

Mucositis is the most common side effect of chemotherapy, and a complex biological process that involves direct destruction of the oral mucosa along with the reduction of epithelium due to the immune system response, inflammatory process, or secondary infection by oral bacteria.

The mental, physical, and psychological state of patients during the intervention process and completing the questionnaires could have affected the patients’ response to treatment, which is one of the limitations of the present study.

According to the results of this study, comparing a combined mouthwash solution containing various drugs and a dilute solution of licorice root extract as a plant compound, no differences were observed in the effectiveness of the two mouthwash solutions in terms of the incidence and severity of mucositis in cancer patients undergoing chemotherapy.

Authors wish to thank the Ahvaz Jundishapur University of Medical Sciences Research Department, as well as the ICU staff of Baghaei Hospital for their help and support. We also appreciate the collaboration from the patients and their lovely families for participating in the study.