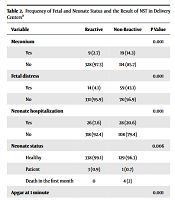 Non stress test (NST) is the most common and the first recommended test to assess the health of the fetus especially in high risk pregnancies in most studies. This study aimed to determine the effectiveness of non-stress test on fetal, neonatal and maternal outcomes to prevent chronic consequences in delivery health centers of West Azerbaijan.

This was a classic case-control study conducted on 984 subjects in West Azerbaijan. The method of sampling was census during the last two years (2014 - 2015). Of 984 subjects, 500 subjects had undergone NST (case group) and 484 subjects had not been undergone NST (control group). Data were collected using records of mothers and checklist including variables related to maternal characteristics such as fetus characteristics, and the results of the NST. The data were analyzed using SPSS version 24 software. A P value of less than 0.05 was considered significant.

In the case group, 71.6% had a positive or reactive response and 28.4% had non-reactive test response. The rate of fetal death in centers without NST was 2.18% and fetal deaths were higher in centers without NST and all deaths in centers with NST occurred when this test was non-reactive (P < 0.05). There was a statistically significant relationship between NST with exposure to meconium and fetal distress. The main cause of NST was the premature rupture of the membranes (PROM) (41.7%). Post-term, meconium-stained amniotic fluid, decreased fetal movement (DFM) and post-term were other common causes. Meanwhile, 24.4% of mothers had abnormal movement tests, and this result was more non-reactive NST compared with reactive NST (P = 0.001).

Using non stress test to observe the abnormal results of this test, midwives working in centers can quickly decide on appropriate referrals of mothers to hospitals and delivery centers, in such a way that this referral prevents mothers from developing adverse fetal and neonatal outcomes.

Fetal distress is a condition of the fetus with high chance of early death or permanent injuries in a short time. Naturally, the correct determination of these conditions and timely action are required in order to save the fetus’s life (1). Fetal distress may result in premature labor with long-term complications (2), and infection and hospitalization of a newborn in the intensive care unit (3, 4). Fetal hospitalization can lead to post-birth encephalopathy, which also leads to a childhood disability as a chronic outcome (5-7). Salivary gland infection after maturation also occurs in infants who have had fetal distress (8). The incidence rate of fetal distress was 233 per 1000 live births followed by the perinatal death rate of 47 per 1000 live births (9). Four million neonatal deaths occur each year from birth asphyxia that can be originated from fetal distress (10).

The health of the fetus is the basis of the life of each individual and a variety of methods have been developed for the examination of the health of the fetus, each of which has its own specific sensitivity, specificity and predictive value including fetal movement, non-stress test (NST), post-contraction test, and biophysical profiles (11-13).

Nowadays, non-stress test is the most common and the first recommended test to check the health of the fetus in most studies that are used in high risk pregnancies (11, 14). Based on the results of this test, it is possible to decide on the continuation or termination of pregnancy and to provide appropriate ways for reducing the mortality and maternal mortality and the resulting economic and psychological damage (12). The NST is a standard method for pre-natal evaluation due to the lack of contraindications and ease of use in many midwifery centers worldwide. The gestational age affects the rate and response of the basal heart rate of the fetus during the last third months of pregnancy (15, 16).

Inadequate acceleration does not always predict a fetal risk, and in 50 - 90% of the cases there can be false positives (15). Non-stress test results are interpreted as reactive and non-reactive. The definition that is most commonly accepted as the reactive result is the presence of increase in the heart rate of the fetus at least twice at 15 beats per minute for 15 seconds, which occurs within 20 minutes of the test. Since fetal heart rate and fetal movement usually occur together, if the acceptable increase in fetal heart rate is present at least twice, the test result is reactive; otherwise the non-reactive outcome pattern will need to be investigated (17).

Given the high rates of high-risk pregnant patients and the need for an accurate decision on the continuation or termination of pregnancy in these patients, these cares have created a new hope for physicians to identify fetuses at risk of death and asphyxia of the fetus for preventing subsequent neurological damage (15). In the study of Subramanian et al. (18), the results of prospective data showed that those with a reactive non-stress test had good perinatal outcome indicating the usefulness of NST and non-reactive NST was related to the increase in the rate of cesarean section delivery.

Given the importance of fetal and maternal health, severe complications of fetal distress as well as the efficacy of the NST, the effect of NST on the fetal survival rate and the prognosis of mortality and morbidity of the fetus in delivery centers equipped with NST and the centers that do not have NST was evaluated, a comparative study was conducted to determine the effectiveness of non-stress test on fetal, neonatal and maternal outcomes in delivery health centers of West Azerbaijan.

This was a classic case-control study conducted on 984 subjects in West Azerbaijan. The method of sampling was census during the last two years (2014 - 2015) from the recorded files. Of 984 subjects, 500 subjects had performed NST (case group) and 484 subjects had not performed NST (control group). Inclusion criteria were neonate without genetic abnormalities and available NST in the thirty second week after gestational age. Exclusion criteria were multiple pregnancies, smoking, placental abruption, diabetes, ectopic pregnancy, collagen vascular diseases, molar pregnancy and hydrops fetalis. Data were collected using records of mothers and checklist including variables related to maternal characteristics such as fetus characteristics, and the results of the NST.

This research was performed in accordance with the principles of the Declaration of Helsinki. All information about individuals was coded and kept confidential. This study was approved by the Committee of Ethics in Human Research at Islamic Azad University, Urmia Branch (IR.IAU.URMIA.REC.1396.08)

The collected data was analyzed using SPSS version 24 software. Descriptive analysis was used to determine the distribution of absolute frequency and percentages, mean and standard deviation of variables, and inferential analysis (chi-square and correlation tests) was used to determine the relationships between the variables. A P value less than of 0.05 was considered significant.

Table 1. Frequency of Fetal and Neonate Status by the in Delivery Centers with/without NSTa

This study showed that 75.6% of mothers had normal movement tests. This study showed that in NST centers, the number of abnormal movements tests was more when the result of NST was non-reactive compared to a reactive result (72.38% vs. 56.5%), and chi-square test showed a significant relationship between non-reactive NST and movement tests/delivery status/Apgar at 1 minute/ neonate status/neonate hospitalization/fetal distress and the presence of meconium in the delivery centers (P = 0.001) (Table 2).

Table 2. Frequency of Fetal and Neonate Status and the Result of NST in Delivery Centersa

This study showed that the most common reason (41.7%) for NST in mothers referred to centers with NST was premature rupture of membranes (PROM) and the least common reason (0.3%) was related to the latent phase. This study shows that the majority of maternal referral was PROM. Chi-square test showed a significant relationship between the cause of NST and the referral status of mothers (P = 0.001) (Table 3).

Table 3. Frequency of Referrals Status of Mothers and the Cause of NST in Delivery Centers with NSTa,b

There are several techniques for diagnosing the health and survival of the embryo during pregnancy with different levels of sensitivity and specificity, such as fetal movement test, non-stress test and umbilical artery Doppler (19). Nowadays, non-stress test is the most common and the first recommended test to check the health of the fetus in most studies (11, 14), which is used especially in high risk pregnancies (11). The results of this study showed that 68.6% of cases undergoing NST had positive or reactive results and 28.4% had a negative or non-reactive result. If fetal heart becomes faster with its physical movements, it is called reactive and if this does not happen, this test will be non-reactive (14, 20). In the study of Kabootari et al. (20) in Gorgan, 68.4% of mothers had reactive NST and 31.6% had non-reactive results. In the study of Naderi et al. (21) in Kerman, 64.1% of 120 mothers had non-reactive result. The results of the present study showed that in NST-equipped centers, the rate of delivery of cesarean compared to the vaginal delivery was greater (32.3% vs. 5.5%) and in centers without NST, the vaginal delivery rate was 94.3% compared to the cesarean section. In 2019, Begum revealed that of 200 patients, there were 149 reactive tests, 19 suspected cases and 32 non-reactive tests. There was a significant increase in cesarean section in mothers with non-reactive test and fetal distress (22).

In this study, the main reason for doing NST test was the premature rupture of the fetus (41.7%). Post-date, meconium-stained amniotic fluid, decreased fetal movements and post terms were other common causes. Statistical tests also showed a significant relationship between NST and referral of mothers. The results of the study by Modarres et al. in relation to NST indication showed that some units had more than one indication, and the most indications were decreased fetal movement (25%), fetal death history (22.5%), fetal examination according to hospital protocol (17.5%), gestational diabetes mellitus (15%), history of infertility (15%), pre-pregnancy diabetes (7.5%), pre-eclampsia (7.5%), heart disease (5%), mother’s aging (5%), as well as polyhydramnios, prolonged pregnancy, excessive maternal weight gain and cesarean history due to heart rate decrease in the first child were (each one 2.5%) (26).

Since the family also plays an important role in the timely diagnosis and prevention of children’s behavioral and social problems (27), monitoring child evolution and screening for possible problems, especially the first child’s visit, is essential for health examination. Studies have shown that abnormal and unusual conditions for the baby are a risk factor for developmental delay. Early delivery and low birth weight especially less than 1500 grams, is known as a major risk factor (28). Therefore, based on the results, it is possible to decide on the continuation or termination of mothers’ pregnancy and to provide appropriate ways to

Awareness of the results of this research can be helpful to the authorities and staff of delivery centers for providing services to the patients, so that in dealing with pregnant mothers needing NST; they can save time and cost by doing the test as soon as possible. It can reduce the anxiety of pregnant mothers. Using non stress test to observe the abnormal results of this test, midwives working in centers can quickly decide on appropriate referrals of mothers to hospitals and delivery centers, in such a way that this referral prevents mothers from developing adverse fetal and neonatal outcomes. However, with the referral of mothers to hospitals and non-reactive results of NST, the rate of cesarean section increases but they can quickly save the lives of the infant in danger, it seems that the hospital’s facilities can be used to reduce the incidence of cesarean section using higher sensitivity tests.

The authors would like to thank the Vice-chancellor for Research & Technology of Ardabil University of Medical Sciences and all contributors of this project.

Copyright © 2020, Jundishapur Journal of Chronic Disease Care. This is an open-access article distributed under the terms of the Creative Commons Attribution-NonCommercial 4.0 International License (http://creativecommons.org/licenses/by-nc/4.0/) which permits copy and redistribute the material just in noncommercial usages, provided the original work is properly cited.
download pdf 110.17 KB Get Permission (article level) Import into EndNote Import into BibTex
Number of Comments: 0