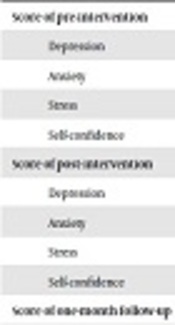 The Effect of Tai Chi Exercise on Stress, Anxiety, Depression, and Self Confidence of Nursing Students

The present study intended to investigate the effect of Tai Chi exercise on the levels of stress, anxiety, depression, and self-confidence of nursing students.

To this end, about 64 nursing students were selected and randomly divided into two 32 case and control groups in this clinical trial study. The case (experimental) group received 40-minute Tai chi training sessions three times a week for 8 weeks. Both groups completed DASS-42 questionnaire and Eysenck’s Personality Questionnaire (EPQ) as a pre-test, post-test, and one-month follow-up.

According to the results of the present study, it can be concluded that Tai Chi had a significant effect on reducing the stress, anxiety, and depression while enhancing the self-confidence of the intended nursing students. Furthermore, Tai Chi is recommended as a simple and inexpensive way to reduce students’ stress, anxiety, and depression, whereas improves their self-confidence.

Students play a critical role in a country’s future. Every society needs a healthy physical and mental human force to progress; since students constitute a large part of the society in Iran, their health is of utmost importance (1). Mental health is the most prominent dimension of health. With the advancement of technology, mankind has been influenced by life pressures more than before; thus maintaining mental health plays an important role (2). Stress is one of the main factors threatening mental health. Stress is a multidimensional phenomenon. It is important not only from the viewpoint of economic losses but also for its negative effects on people’s physical and mental health (3).

Education is a stressful experience for the students, particularly in medical sciences, dealing with human lives. Among medical students, nursing students confront with many stressful factors due to their low levels of decision-making in their careers and their need for learning different skills. In addition to stress-induced education, nursing students are also affected by the stress caused by the clinical environment (4). Excessive stress can have a detrimental effect on the academic performance and well-being of students while interfering with efficient learning and causing mental disability and motor disorders. It can also cause alcohol and drug addiction, eating disorders, psychoactive drug abuse, suicide, sleep disturbance, mental health disorders, and psychological symptoms (5).

Psychological consequences of stress include depression and anxiety (1). As an important problem, anxiety annually affects the education of millions of students all over the world and results in their academic failure (6). The students of paramedical sciences, especially nursing students, always experience anxiety due to the stressful nature of their academic field that requires practicing clinical theories. Anxiety is in an important association with learning. It affects the ability of learning, performance, training nursing students during their education, and making the right clinical decisions (7).

Depression is the most common mood disorder. It is a steady, and sometimes unstable, mood that influences all aspects of a person’s life. Depression mood refers to a state of mild to severe sorrow, sadness, and irritation. Nursing students are highly exposed to the risk of depression at different levels due to changes in the place of residence, sudden separation from family, academic pressure, exam anxiety, and other stressful factors during their education. Some people of the society, including students of medical sciences and, in particular, nursing students, who are involved in protecting the physical and mental health of the people in the society are more vulnerable to such risks than other people due to the particular situation they experience in their life and career (8).

Non-pharmacological methods, known as complementary medicine, have recently received considerable attention (15). One type of complementary medicine is mind-body medicine that involves body movements with a focus on breathing and cleansing or nourishing the mind to reach a deep state of tranquility. Tai Chi is an example of such practices (16). Tai Chi is an ancient Chinese martial art whose movements are based on the harmony between mind, body, and outside forces. It includes rhythmic and relaxing movements emphasizing trunk rotation, weight change, and coordination (17). Tai Chi has three key components, including mediation, movement, and breathing (16).

Tai Chi movements involve models derived from the movements of birds, animals, and nature such as brushing the knee, separating the horse’s tail, and grasping the bird’s tail, etc. so as to enhancing health, breathing, strength, and endurance (18). This set of relaxing, rhythmic, and fluid movements brings about a state of mental health and calm by fostering the body and mind as a coherent unit as well as evacuating the mind from thoughts that cause tension (19). Zheng et al. (20) found that Tai Chi can enhance the physical and mental health of the students. In another study on senior students, Webster et al. (21) found that Tai Chi had a great impact on the physical and mental health.

The present study is a two-group and three-step clinical trial. The study was conducted in the Faculty of Nursing and Midwifery of Isfahan. The intended subjects (participants) were selected based on the objective-oriented convenience sampling method and were randomly divided into two case and control groups based on simple random assignment of odd and even card numbers. About 64 nursing students who met the inclusion criteria were randomly assigned to the two groups of the case (32 subjects) and control (32 subjects). The inclusion criteria were the lack of a history of heart, muscular, and mental problems as well as lack of a long-term experience in Tai Chi. Data were collected using DASS-42 (Depression, Anxiety, and Stress Scale-42) questionnaire consisting of two sections: one on personal information and the other on the extent of depression, anxiety, and stress.

It assessed the personal information of the selected subjects, including 7 items about age, sex, marital status, family structure, semester of education, income, and status of residence.

Eysenck personality questionnaire (EPQ) was also used to assess self-confidence. EPQ, developed by Hans Eysenck (1977), consists of 30 items, each contains “Yes”, “No” and “?” options. The reliability and validity of EPQ were estimated in various foreign and Iranian studies (9). Sampling was performed along with providing the subjects with necessary explanations about the purpose and methods of the research to reach informed consent. The intervention was conducted in the form of 40-minute training and implementation sessions of the preliminary short forms of Yang’s Tai Chi exercise three times a week for 8 weeks. Moreover, the Tai Chi tutorial CD was presented to the case group to remind working out at home. The control group received their normal semester of education during the Tai Chi intervention period. Data were collected in three steps of pre-intervention, post-intervention, and a one-month follow-up. Ethical considerations were comprised of presenting a letter of introduction, obtaining permission from the school of nursing, providing sufficient information about the purpose of the present study, and ensuring the confidentiality of the participants’ personal information. Data were analyzed based on the tests of independent t-test, chi-square, Mann-Whitney, Fisher’s exact, post hoc test, and repeated measures ANOVA using SPSS18 software.

The Ethics Committee of Isfahan University of Medical Sciences approved the study (No. 395957) and the study was registered in IRCT (IRCT20171210037824N1). Formal authorization was obtained from the College of Nursing and Midwifery of Isfahan University of Medical Sciences for both the sampling and the study. The purpose and method of the research were described to the participants and written informed consent was obtained from all subjects to participate in the study.

The present clinical trial study aimed to investigate the effect of Tai Chi on the stress, anxiety, depression, and self-confidence of 64 nursing students of the school of nursing at Isfahan University of Medical Sciences.

The results of the present study showed that the mean scores of stress, anxiety, depression, and self-confidence were not significantly different in the pre-intervention stage between the case and control groups, while significantly decreased in the case group after Tai Chi exercises in the post-intervention stage. However, there was no significant difference in the mean scores of the control group. It can, hence, be claimed that Tai Chi had an impact on stress, anxiety, depression, and self-confidence. Other studies have also investigated the effect of Tai Chi on improving the psychological symptoms such as stress, anxiety, and depression (23). The majority of such studies have been conducted to examine the effect of Tai Chi on patients with chronic diseases or on the elderly population. Others have studied the relationship between Tai Chi and the physical and mental health of students or younger population. Wang et al. (24) studied the effect of Tai Chi on the physical and mental health of students. They gave 24 models of Tai Chi training exercises to the students twice a week for 3 months. They found that Tai Chi has a positive effect on the students’ physical and mental health (24). Lee et al. (23) aimed to investigate the effect of Tai Chi on improving the psychological well-being of elderly people. The population included healthy elderlies (mean age: n = 72) who were given 1-hour Tai Chi training session twice a week for 24 weeks. The results indicated decreased stress (23).

Tsai et al. (25) studied the positive effects of Tai Chi on the blood pressure, cholesterol, and anxiety of 78 healthy people. The participants received 50-minute Tai Chi sessions three times a week for 12 weeks. The results indicated positive effects of Tai Chi on improving anxiety levels in the case group compared to the control group (25). Wang (26) studied the effect of Tai Chi on pain relief and performance improvement in patients with rheumatoid arthritis. To this end, 20 patients received Tai Chi exercises twice a week for 12 weeks. The results showed a decrease in the symptoms of depression and anxiety in the case group in comparison to the control group (26). Sattin et al.’s (27) study on Tai Chi showed that Tai Chi significantly reduced depression. Moreover, Han et al. (28) found that Tai Chi significantly reduced the symptoms of anxiety and depression. Mustian et al. (29) found that Tai Chi increased the self-confidence of the participants. Fransen et al. (30) found that Tai Chi did not have any positive effect on reducing stress, anxiety, and depression.

The strength of the current study is addressing an important intervention i.e. Tai Chi, for decreasing depression, anxiety, and stress while increasing the self-confidence of academic students. However, further study is recommended to evaluate other samples and populations. The limitations of this study included the small sample size, thereby limiting the generalized applicability of the results. Therefore, the findings of this study should be reassessed after similar studies have been replicated in other contexts.

The results of the present study indicated that Tai Chi reduced nursing students’ stress, anxiety, and depression while improving their self-confidence in the post-test and one-month follow-up. Consequently, it can be stated that Tai Chi is an effective way to improve the psychometric symptoms of students in the university.

Copyright © 2019, Jundishapur Journal of Chronic Disease Care. This is an open-access article distributed under the terms of the Creative Commons Attribution-NonCommercial 4.0 International License (http://creativecommons.org/licenses/by-nc/4.0/) which permits copy and redistribute the material just in noncommercial usages, provided the original work is properly cited.
download pdf 121.21 KB Get Permission (article level) Import into EndNote Import into BibTex
Number of Comments: 0