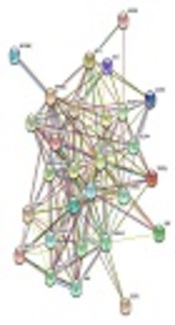 What Is Adult T-Cell Leukemia Pathogenesis? System Virology as a Solution of This Puzzle

ATLL is a progressive lymphoid malignancy, which characterized with an uncontrollable proliferation of CD4+ T cells after a long-lasting period of infection with HTLV-1 in ACs cases (3). The main mechanism of ATL remains unknown; however, it is suggested that cytokines and the immune system play a key role in the development of ATL (3, 4). Due to the existence of several inquiries regarding the ATL pathogenesis; this study was done for the analysis of the main changes in ATL patients compared to ACs via transcriptomic information during a system biology report.

According to our analysis, there are over-expression of different genes including NF-kB, mTOR, PI3K/Akt, transactivation factor, T cell surface molecule as well as anti-apoptotic genes in ATLs; whereas downregulation of IFNG, Caspase, Foxp3, JAK-STAT, or cytokine such as TGF-β in this group. Several of these changes are predictable, for example, downregulation of IFN-γ production followed the destruction of functionality T cells; or decline of TGF-β in ATLs, which inhibits by HTLV-1 (HTLV-1 is inducing production of T cells whereas suppresser effects of TGF-β on T cells proliferation). In addition, our analysis showed that Foxp3 was downregulated in ATLs; given that T regulatory cells are limited T cell proliferation. Therefore, the expression levels of Foxp3 should be down-regulated in ATLs, which was confirmed in this study. Moreover, Janus tyrosine kinases (JAKs) is cause to proliferation or NF-kB and IL-2 was essential for T cell activation and proliferation. Therefore, JAK-STAT, NF-kB signaling pathway, and IL-2 production should be over-expressed in ATLs for T cells proliferation and develop to ATL, which is confirmed in our data analysis (Table 1) (2-5). According to the review of the literatures, Tax is induction of the transcription factors such as CREB, SRF, and AP-1, which is confirmed in our analysis (4, 5).

Table 1. The Expression Profiles of ATLs and ACs Compared with Healthy Individuals

According to PPIN, PI3K/Akt, mTOR, JAK-STAT, NF_kB, and transactivation genes have central roles in ATL pathogenesis, which are located in central nodes. Cytokines, cyclin, T cell surface molecules, and anti-apoptosis genes are located in external nodes, which influenced by central nods (Figure 1). Based on the signaling network, HBZ and Tax can promote T cells for cell growth and proliferation using several signaling pathways including NF_kB, PI3K, and MAPK signaling pathway, which lead to ATL during lengthy induction by HTLV-1 (Figure 2). The signaling network in ATL pathogenesis in CD4+ T cells

In summary, there is limited information regarding ATL pathogenesis; KEGG pathway (hsa05166) is not enriched enough and future investigation for ATL pathogenesis is needed. This information can be useful for the development of diagnosis, monitoring, and treatment of ATL patients. According to the present analysis, the immune-system changes, particularly cytokines, can have influenced several vital signaling pathways such as NF-kB, MAPK, and PI3K-Akt/mTOR signaling pathways, which regulate cell proliferation and is responsible for developing to adult T-cell leukemia/lymphoma.

Copyright © 2019, Jundishapur Journal of Chronic Disease Care. This is an open-access article distributed under the terms of the Creative Commons Attribution-NonCommercial 4.0 International License (http://creativecommons.org/licenses/by-nc/4.0/) which permits copy and redistribute the material just in noncommercial usages, provided the original work is properly cited.
download pdf 3.80 MB Get Permission (article level) Import into EndNote Import into BibTex
Number of Comments: 0