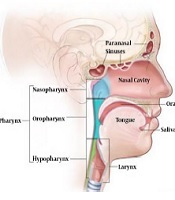 Head and neck cancer is the most common malignancy in Sindh, Pakistan. The type of cancer can be observed in the oral cavity, lips, buccal mucosa, oropharynx, hypopharynx, nasopharynx, the floor of the mouth and hard palate in Sindh.

The present study was conducted at the Nuclear Medicine Oncology and Radiotherapy Institute Nawabshah (NORIN), Sindh, with the objective of reviewing descriptive epidemiological characteristics and incidence of head and neck cancer in this rural area.

In this study, we divided head and neck cancer patients according to their gender, age, districts, tumor location, probable causative agents, and stage of cancer when they had been admitted to the Radiotherapy Department of NORIN.

In total, 1,030 patients were registered during the study period from January 2012 to December 2016, comprising 56% males and 44% females. The most common site of the head and neck tumors was the oral cavity (58%), followed by the tongue, tonsil, floor of the mouth, gum, hard palate, soft palate, and lips. Other sites of head and neck cancer were hypo-pharynx, nasopharynx, salivary gland, parotid gland, oral-pharynx, and lyrnx. Most patients came in NORIN at stage III and stage IV of their disease and most of them were at the age of 40 - 85 years. Most patients were the residents of Nawabshah and neighboring districts.

Head and neck malignancy was the most common type of cancer registered in NORIN in the last five years. Because of the lack of awareness, education, and diagnostic facilities, most patients start cancer treatment at later stages of the disease, which makes it very difficult to cure. Smoking and the use of alcohol, Gutka, Supari, Naswar, Man-Pori, etc., are the main causes of head and neck cancer.

Head and neck cancer is one of the most prevalent malignancies around the world (1). This malignancy most commonly includes the neoplasms of the oral cavity, followed by skin, lips, nasal cavity and paranasal sinuses, salivary glands, pharynx, and larynx (2). South Asian areas including Pakistan are recognized as high-risk geographical regions for this type of cancer (3) while it is found rarely in developed countries such as the UK (4).

Head and neck cancer is a broad term that includes various types of cancer (tumors) in the upper aerodigestive tract, including the lip, mouth, nose, tongue, throat, oral cavities, sinuses, pharynx, and vocal cords (larynx), as well as some other sites in this anatomical part as shown in Figure 1 (5). Squamous cell carcinomas account for about 90% of these cancers, which are the most frequently observed malignancies of the head and neck site, occurring possibly due to the excessive use of alcohol and tobacco (6). Head and neck cancer ranks sixth among all cancers in the world with about 630,000 new patients registered per year leading to 350,000 deaths annually. The five-year survival rate of patients with head and neck squamous cell carcinoma is around 45% - 55% (7). It has been observed that the chance of developing head and neck cancer is relatively higher in Pakistan, particularly Karachi (the urban area of Sindh), than any other region in the world. It is due to the habitual involvement of a large number of people in smoking and chewing Chalia and Gutka. The incidence rate of head and neck cancer has been noted as 10 per 100,000 population in countries such as Pakistan, India, and Sri Lanka. The five-year survival rate of head and neck cancer is below 40% (8). The largest city of Pakistan, Karachi, ranks highest in the globe with regard to the incidence of oral cavity cancers (9). In recent years, the rural areas of Sindh have been the victims of growing malignancies of head and neck but accurate statistics and data have not been published to indicate the factual position of rural areas.

The frequent use of betel nut, betel quid, and pan masala enhances the probability of developing head and neck cancer (10). Studies in Pakistan show that betel, areca, and tobacco chewing may lead to 8.5 to 10 times increased risk of oral cancers, after adjusting for covariates (11). According to research, 58% of the total head and neck cancers in the world occur in the south and southeast Asia owing to the persistent use of chewing tobacco (12).

Both males and females in Pakistan are prone to the malignancies of head and neck but males are more affected as they, with the rates of 66% to 95%, are the main victims of this fatal disease (13). The ratio of pharyngeal and oral cavity cancers among males and females is around 3 to 1 (14). The incidence of head and neck cancer is estimated to be higher in older people than in younger ones (12).

Nuclear Medicine Oncology and Radiotherapy Institute Nawabshah (NORIN) is among a few tertiary healthcare facilities in the rural areas of Sindh, Pakistan, which specifically operates for diagnosis, treatment, and research of different types of cancer. NORIN started its clinical oncology and radiotherapy services in January 2012.

The present study was conducted at Nuclear Medicine Oncology and Radiotherapy Institute Nawabshah (NORIN), Sindh, with the aim of reviewing descriptive epidemiological characteristics and incidence of head and neck cancer from January 2012 to December 2016. All the data were collected from manual records, which were gathered during this period and verified from hospital data base system. In this study, we divided head and neck cancer patients according to their gender, age, districts, tumor location, and stage of cancer when they were admitted to the Clinical Oncology and Radiotherapy Department of NORIN. The diagnosis and staging were based on international protocols and International Classification of Disease-oncology by experienced oncologists. Figure 4. Number of head and neck cancer patients in the last five years Figure 7. Age-wise distribution of head and neck cancer patients in the last five years at NORIN Figure 8. Districts of the rural areas of Sindh, Pakistan

It is possible that the number and percentage of different head and neck cancers vary in this area from other areas. A study (16) showed that the extensive use of Betelnut, Pan, Gutka, and tobacco in the forms of smoking (cigarette, Biddi) or chewing (Naswar, Nass) may raise the risk of cancer of head and neck, especially in the oral cavity. A study (17) showed age-specific cancer incidence in urban areas but such data are not available for rural areas of Pakistan. Some radiotherapy centers situated in urban areas of Pakistan such as KIRAN cancer hospital, Karachi Jinnah hospital, Lahore AFIP Hospital, and Rawalpindi conducted retrospective analysis of head and neck cancer data (15) but no similar study was found at radiotherapy centers situated in rural areas of Sindh.

Head and neck malignancies are the most common type of cancer registered at NORIN in the last five years. Because of the lack of awareness, education and diagnostic facilities, most patients start cancer treatment at the third and fourth stages of disease, which makes it very difficult to cure. It is concluded that patients suffering from head and neck cancer have an age between 40 and 85 with male predominance. Smoking and the use of alcohol, Gutka, Supari, Naswar, Man-Pori, etc., are the main causes of head and neck cancer in rural areas. Central cancer databases, media awareness campaigns for general populations, and informative lectures in educational institutes may be undertaken to prevent head and neck cancer. In addition, screening programs, pictorial hazards of chewing tobacco and betel, the complete government ban on the use of Gutka, Supari, and Manipuri, and introduction of new diagnostic facilities for early detection are necessary to efficiently fight head and neck cancer. More studies are suggested to indicate the factual position of rural areas of Pakistan.