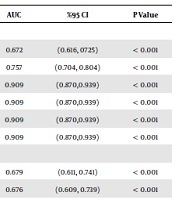 Central blood pressure is an important index in central hemodynamic stress and may be associated with an increased risk of cardiovascular diseases.

This study evaluated the central blood pressure indices in coronary artery disease (CAD) subjects and their association with the number of diseased vessels involved in CAD.

A random sample of 300 Iranian subjects who underwent coronary angiography (mean age 58.08 ± 10.62 years) was studied. Coronary lesions were defined as luminal stenosis ≥ 50% and the number of diseased vessels and the central aortic pressure were taken. The probability of central blood pressure indices with the number of diseased vessels was also determined by using cut-off points, based on the sensitivity, specificity, positive predictive value, and negative predictive value.

FDP, FSP, and FSP, in particular, could be the effective predictors of CAD in Iranian populations. Therefore, the quality of life may be improved by the management of central blood pressure and using CAD cut-off points.

This study aimed to assess the relationship between the severity of coronary artery disease and central aortic blood pressure. Moreover, the probability of CAD and 3VD has been determined for the first time by using cut-off points based on sensitivity, specificity, NPV, and PPV in an Iranian population.

This study was a hospital-based cross-sectional study conducted at the Center for Elective Diagnostic Coronary Angiography, Ahvaz, Iran. The study population included a total of 300 subjects within an age range of < 18 years old, who were selected, based on the simple random sampling method and the following selection criteria from December 2017 to December 2018.

Patients with the following conditions were excluded from this study: no sinus rhythm, aortic valve stenosis or regurgitation more than mild severity and other valves more than moderate severity, renal impairment with 1.5 < serum creatinine, peripheral artery disease, CABG cases, and contraindications of coronary artery angiography. Moreover, patients who had MI or thromboembolism in the last three months were excluded from the study to prevent any interference with the analysis results. Informed written consent was obtained from all subjects. The study was approved by the ethical review board at Ahvaz University of Medical Sciences (ethical ID number: IR.AJUMS.REC.1397.016).

3.4. Determine the Number of Diseased Vessels

In order to determine the significance of different parameters, the data collected during the current study were recorded and statistically analyzed by the SPSS program (version 22.0) and Medcalc (version 15.0). Results were expressed as mean ± SD. The Kolmogorov-Smirnov test and Q-Q plot were used to study the normality of the data.

Univariate data analysis was conducted using an independent t-test, ANOVA test, and Spearman correlation coefficient. Multivariate data analysis was carried out using ordinal regression and logistic regression. Moreover, the ROC curve was used to assess the diagnostic power of variables, and the appropriate cut-off points were obtained based on sensitivity, specificity, positive predictive value, and negative predictive value. The significance level was considered to be 0.05.

Table 1. Comparisons of the Relative Indices of Central Blood Pressure in NO CAD Patients and the Number of Coronary Artery Disease (1VD, 2VD, 3VD)

aP Value: comparison between NO CAD and CAD

Odds ratio (OR) for the FPP, FSP, FDP, and FSP/FDP was found to be significant (P < 0.001) in CAD and 3VD subjects (Table 2). According to ordinal regression analysis in which variables such as age and sex were matched, there was a relationship between the relative indices of central blood pressure and the number of diseased vessels such that the higher the number of diseased vessels, the higher the FPP, FSP, FSP/FDP and the lower the FDP (P < 0.001) (Table 3).

Table 2. Odds Ratio According to the Relative Indices of Central Blood Pressure for the Diagnosis of CAD (vs. NO CAD Patients) and the Occurrence of 3VD (vs. the Total Patients with 1VD and 2VD)

Table 3. Association of Relative Indices of Central Blood Pressure and the Number of Coronary Arteries Disease (0 = No CAD, 1 = 1VD, 2 = 2VD, 3 = 3VD) Matched for Age and Gender by Linear Regression Models

Table 4. The AUC of the Relative Indices of Central Blood Pressure for the Diagnosis of CAD (vs. NO CAD Patients) and the Occurrence of 3VD (vs. the Total Patients with 1VD and 2VD) Using the ROC Curve

Studies have been conducted on central aortic blood pressure indices such as FPP, FSP and FDP, and their association with cardiovascular outcomes, confirming the association of these indices with the increased risk of cardiovascular disease and an increase in the severity of coronary artery disease (10, 12, 13). Previous studies have reported the association between central blood pressure and cardiovascular diseases (3, 5, 6). Moreover, Jankowski et al. showed that PP, FSP, and FDP of the central aorta were associated with the risk of 3VD in CAD patients. They stated that the risk of 3VD increases by 15%, 28%, and 39% per 10 mmHg increases in the central PP, per 0.1 increases in FSP and per 0.1 reductions in FDP, respectively (14). As observed in this study, there was a significant association between increased FPP, FSP and FSP/FDP, decreased FDP, and the higher risk of 3VD (FPP 4.85, FSP 10.68, FDP 0.009 and FSP/FDP 2.28) (P < 0.001). Moreover, there was a significant correlation between increases in central blood pressure indices (FSP/FDP, FSP, FPP), reduction of FDP as well as increases in the number of diseased vessels. However, both odds ratio (11.84; 95% CI: 6.11 - 22.95; P < 0.001) and ROC analysis (AUC: 0.909; 95% CI: 0.870 - 0.939; P < 0.001) showed FSP as the strongest predictor of CAD. In another study, Nakayama et al. showed that FDP, but not FSP, is independently associated with CAD risk in patients undergoing coronary angiography (11). In our study, it was shown that lower FDP values, as well as higher FSP values, are associated with an increased risk of CAD. It means that a lower level of FDP accompanied by increases in other central blood pressure indices could be a suitable marker for predicting the number of involved vessels.

Central blood pressure indices, such as FPP, FDP, FSP, FSP/FDP may be associated with increased diseased vessels in CAD. However, FSP has been shown as the strongest predictor of CAD in Iranian populations. Therefore, the quality of life may be improved by the management of blood pressure treatment based on central blood pressure control and using cut-off points.

1. There were a limited number of patients, and we used a small group who were referred for elective CAG.

We would like to thank the financial support of Deputy for Research of the Ahvaz Jundishapur University of Medical Sciences.

Copyright © 2019, Jundishapur Journal of Chronic Disease Care. This is an open-access article distributed under the terms of the Creative Commons Attribution-NonCommercial 4.0 International License (http://creativecommons.org/licenses/by-nc/4.0/) which permits copy and redistribute the material just in noncommercial usages, provided the original work is properly cited.
download pdf 128.58 KB Get Permission (article level) Import into EndNote Import into BibTex
Number of Comments: 0