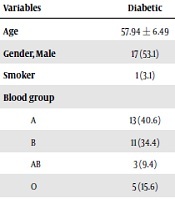 Coronary artery disease (CAD) is one of the main causes of mortality in the world. The role of Von Willebrand Factor (VWF) is very important in platelet adhesion, microcirculation, and acute stenosis and it contributes to the development of atherothrombotic processes.

We decided to evaluate the level of VWF in diabetic and non-diabetic patients as an effective factor in CAD.

This study was performed on 65 patients (32 diabetic patients and 33 non-diabetic patients), who referred to an Echocardiography and Angiography Department. They were evaluated for the VWF level, blood group, and fasting blood glucose. Patients underwent echocardiography, angiography, and, if necessary, percutaneous coronary intervention (PCI) during the hospitalization. They also underwent coronary artery bypass grafting (CABG) if they needed the surgery. After 40 days, we evaluated the anterior ST-elevation myocardial infarction (STEMI), mortality, major adverse cardiac events (MACE), heart failure, and limb ischemia.

The level of VWF in diabetic patients increases cardiovascular problems. Therefore, it seems that these patients can benefit from VWF-reducing drugs. Clinical research can be promising in this field.

Coronary artery disease (CAD) is one of the main causes of mortality and morbidity in the general population. It is estimated that CAD contributes to nearly 50% of annual mortality. It is characterized by atherosclerosis in epicardial coronary arteries (1). Atherosclerotic plaques are the main features of atherosclerosis that progressively narrow the coronary artery lumen and hence disrupt myocardial blood flow. Based on the severity of obstruction and the rate of development, it may also cause myocardial infarction (MI) (2). The incidence of CAD has increased due to increased obesity and other CVD risk factors. Studies showed that the prevalence rates of CAD, coronary diseases-associated risk factors, and metabolic syndromes are higher in Iran than in Western countries (3, 4). One of the most important risk factors for CAD is diabetes, and many studies have confirmed the association between CAD and type 2 diabetes mellitus (5-7). The prevalence of type 2 diabetes mellitus (T2DM) in the Iranian population was reported to be 5.5% (8). It is estimated that diabetic-related CVD is up to 400 per 100,000 population in Iran (9). Esteghamati et al. indicated that 30% of patients with the acute coronary syndrome in Iran were DM patients (10).

Von Willebrand Factor (VWF) is a large glycoprotein that is produced as a multimeric complex in megakaryocytes and endothelial cells (11). The role of VWF is very important in platelet adhesion in high shear rates, microcirculation, and acute stenosis and it contributes to atherothrombotic development (12). The plasma levels of VWF can vary in different people. It is affected by genetic factors such as the ABO blood group and non-genetic factors such as sex hormones and inflammatory mediators. There are several factors, such as hypertension, inflammatory mediators, and factors affecting vascular tonicity (thrombin, histamine-anion superoxide, epinephrine, and vasopressin) that induce endothelial cells to release VWF. The normal range of VWF has been reported from 50 to 160 IU/dL. The active form of VWF increases during inflammation. The severity of inflammation is affected by insulin resistance conditions such as glucose intolerance, diabetes, and obesity. Therefore, glucose impairment may indirectly affect the plasma level of VWF (13). Two key points in the pathophysiology of atherothrombosis are endothelial dysfunction and chronic vascular wall inflammation. The increased VWF level represents the endothelial dysfunction, which can be involved in the development of cardiovascular disorders (14).

In this study, we mean to elucidate the prognostic value of VWF in diabetic CAD patients.

In this descriptive-analytical study, we included diabetic CAD patients who had been referred to the Golestan Hospital Angiography Department in 2018. We excluded patients with arterial fibrillation, frequent premature beats, left bundle branch block, severe valvular disease, and history of previous cardiac surgery. The study was approved by the Ethics Committee of Ahvaz Jundishapur University of Medical Sciences. Signed informed consent forms were obtained from participants.

For each patient, three blood samples were collected. A sample containing Trisodium citrate was used to measure the VWF antigen, which was centrifuged at 2,000 - 2,500 rpm for 15 min and plasma was stored at -80ºC until evaluation. An EDTA specimen for CBC, BG was considered. The last sample was used for BS assessment. Patients were examined by CAG and echocardiography. Afterward, the patients were managed by PCI or CABG.

Human Von Willebrand Factor (VWF) in vitro enzyme-linked immunosorbent assay (ELISA) kit (ab189571) SimpleStep ELISA® range was used for the quantitative measurement of VWF in plasma. A VWF specific antibody was precoated onto 96-well plates and blocked. Standard or test samples were added to the wells and subsequently, a VWF specific biotinylated detection antibody was added, followed by washing with wash buffer. The streptavidin-peroxidase conjugates were added and unbound conjugates were washed away with wash buffer. 3,3’,5,5’-Tetramethylbenzidine (TMB) was then used to visualize the streptavidin-peroxidase enzymatic reaction. TMB was catalyzed by streptavidin-peroxidase to produce a blue color product that changed into yellow after adding the acidic stop solution. The density of yellow coloration was directly proportional to the amount of VWF captured on the plate.

Forty days after anterior STEMI, echocardiography was repeated and MACE (CVA, heart failure, mortality, and limb ischemia) was evaluated on the same day.

All data were analyzed by descriptive statistics including mean, standard deviation, and frequency. The mean levels were compared using the Student’s independent t test or Mann-Whitney test according to data distribution. The chi-square test was used for comparing the proportions. All statistical analyses were carried out using SPSS version 19. A P value of less than 0.05 was considered significant.

The findings of this study showed that the incidence of CAD, the number of involved vessels, and the impairment of cardiac pacemaker function were higher in patients with DM (15). Our results are in line with previous studies conducted by Natali et al. who found that abnormal coronary arteries were more frequent in DM than in non-DM patients and in a study of a large group of patients, the patients also showed a higher prevalence of the three-vessel disease among DM patients (16). Similar findings were also reported by Gui et al. (17) in Chinese people and by Uddin et al. (18). However, Cariou et al. (19) failed to find significant differences in multivessel involvement between DM and non-DM patients. However, there is a controversy concerning whether the angiographic results are different in DM and non-DM patients and our results indicated the involvement of diabetes-related risk factors in CAD development. Moreover, a prospective study found that DM patients were at least two times more susceptible to CHD and its related mortality than non-DM patients (17). The etiology of this higher frequency of CHD-related morbidity and mortality among DM patients is not completely explained. Although many CHD-related risk factors (e.g., dyslipidemia, hypertension, overweight, etc.) are more frequent in DM, they could only explain a small part of CHD susceptibility.

We found that diabetic patients had higher levels of VWF. The same results have been previously shown by other studies. A study conducted by Shao et al. showed that the serum levels of VWF were significantly higher in patients with type 2 DM than in normal subjects (18). Moreover, Seligman et al. showed a significant increase in serum VWF in DM patients, especially those with impaired lipid profiles (19). It will be more important when we know the role of VWF serum level in developing cardiovascular disorders. In a meta-analysis conducted by Whincup et al., it was suggested that the increased levels of VWF were associated with the increase of CVD and the association between VWF and the incidence of CVD was stronger in high-risk populations, such as diabetic patients, than in non-diabetic people. Frankel et al. conducted a study on 3,799 patients and showed the relationship between increased VWF serum level and the risk of CVD in diabetic patients. They also proposed the VWF as a unique CVD risk factor in DM patients.

In this study, we found a strong correlation between MACE and VWF levels. Based on this study, VWF is not only involved in CVD development but also may be actively involved in the progression of CVD. Collectively, our findings are in line with previous studies that showed the importance of VWF serum level in diabetes-related cardiovascular disorders. We also found the prognostic role of VWF in predicting MACE in DM patients. The low sample size and lack of evaluating other major CVD-associated risk factors were the main limitations of this study.

We wish to thank all our colleagues at Imam Khomeini Hospital, Ahvaz, Iran.

Copyright © 2020, Jundishapur Journal of Chronic Disease Care. This is an open-access article distributed under the terms of the Creative Commons Attribution-NonCommercial 4.0 International License (http://creativecommons.org/licenses/by-nc/4.0/) which permits copy and redistribute the material just in noncommercial usages, provided the original work is properly cited.
COMMENTS