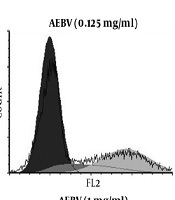 Although there are improvements in breast cancer diagnosis and treatment methods, some breast tumor cells still are resistant to current therapies. Thus, there are attempts all over the world to find an effective way with more toxicity to tumor cells and less to normal cells. In recent years, mesenchymal stem cells (MSCs), due to their native tumor homing property, have been introduced as expression vectors for anticancer proteins, such as TNF-related apoptosis-inducing ligand (TRAIL). However, most tumor cells are resistant to TRAIL or show low sensitivity to it. Thus, it is necessary to find a way to increase the sensitivity of cancer cells and decrease their resistance. One of these ways is combination therapy with herbal drugs.

This study aimed to investigate the combination of sub-toxic doses of aqueous extract of Berberis vulgaris (AEBV) and MSC-TRAIL on MCF-7 cells as a human breast cancer cell line.

Experiments were set based on in vitro cell culture. Combination therapy was carried out in transwell co-culture plates. The cell viability was determined by the MTT assay. The cell cycle was measured using the Propidium Iodide (PI) staining flow cytometry method. All experiments were performed in triplicate. The data were analyzed by One-way ANOVA test using SPSS software.

MCF-7 cells were relatively resistant to MSC-TRAIL and AEBV alone, while a sub-toxic concentration of AEBV (0.5 mg/mL) combined with MSC-TRAIL significantly increased death in MCF-7 cells, showing a synergistic effect.

Breast cancer is a serious problem that causes lots of deaths in both developed and non-developed countries (1, 2). Although there are improvements in cancer diagnosis and treatment, some tumor cells are still resistant to current treatments like radiotherapy, chemotherapy, and hormone therapy. In recent studies, gene therapy has been discussed as a potentially promising way to treat cancers, but the problems are how to guide genes to the tumor site(s) or which vehicle can selectively find cancer location and which vehicle can be stable in the tumor microenvironment (3). The ongoing process of research has shown that mesenchymal stem cells can be a noticeable strategy in anticancer therapies (4).

Mesenchymal stem cells (MSCs) can be isolated from different tissues like bone marrow, adipose tissue, dental pulp, muscles, and others (5). These cells have the native ability to homing to the tumor site(s), so they can migrate toward it selectively and carry anticancer genes (6). Thus, they open a window to improve clinical approaches like cancer gene therapy. One of the novel applications of MSCs is their use as expression vectors for anticancer proteins, and due to their native tumor homing property, they could be considered as a targeted cancer cell therapy (7). Among these anticancer agents, TNF-related apoptosis-inducing ligand (TRAIL) has received more attention in the last decades (8). In this way, the specific target (TRAIL) directly reaches the tumor site and exerts a long-term in situ treatment (9, 10). However, most tumor cells are resistant to TRAIL, or they show low sensitivity to it. Thus, we tried to find a way that increases the sensitivity of these tumor cells to TRAIL (11). In this regard, one approach is its combination with chemotherapy drugs. This combination has been previously used to sensitize tumor cells against the apoptotic protein TRAIL (12, 13). Like these chemical factors, some natural products have also shown the ability to sensitize resistant cancerous cells (14). Berberis vulgaris is one of these herbs that grows mostly in Iran (typically around Birjand city). There are lots of reports about the effects of different parts of Berberis vulgaris, such as fruits, leaves, and roots, on various cancerous cells. Both aqueous and alcoholic extracts of Berberis vulgaris showed anti-proliferative effects in a time- and dose-dependent manner in various cancers, including breast, liver, and colon cancers (15-17).

The present study aimed to investigate the effect of aqueous extract of Berberis vulgaris (AEBV) on the morphology, viability, and cell cycle of MSCs derived from human adipose tissue (Ad-MSCs) to find the non-toxic concentrations of AEBV and determine the effect of Ad-MSC-TRAIL and AEBV combination therapy on human breast cancer MCF-7 cells.

This study was performed with the ethical code IR.BUMS.REC.1396.109. The dried fruit of Berberis vulgaris (10 g) was immersed in 100 mL distilled water and incubated at 80ºC for 10 min. The resulting extract was centrifuged at 10,000 g for 10 min, and the supernatant was passed through a Whatman No. 1 filter paper. Then, the extract was freeze-dried, and the solid residue was used as AEBV.

The MSCs used in this study were derived from human adipose tissue (Ad-MSCs) as described and characterized in our previous study (18). The cells were cultured in DMEM (DMEM Low Glucose + DMEM F12), supplemented with 10% Fetal Bovine Serum (FBS), 1% penicillin, and streptomycin (all from Gibco Life Technologies), and incubated at 37ºC in a humidified incubator with 5% CO2.

The Ad-MSCs were plated in six-well plates at a density of 5 × 104 cells/well. The cells were treated with AEBV concentrations ranging from 0.125 to 2 mg/mL. The morphology of the cells was monitored under an inverted microscope (Olympus X71, Japan), and images were taken by a digital camera (Olympus DP-12, Japan) on days 1, 3, 5, and 7.

The Ad-MSCs were seeded in 96-well plates at a density of 2 × 103 cells/well. A day after seeding, they were treated with AEBV (0.125 to 2 mg/mL). The viable cells were identified using the MTT assay on days 1, 3, 5, and 7 after treatment. The results of cell viability were calculated by dividing the absorbance of treated cells by the absorbance of control ones.

The Ad-MSCs were plated in six-well plates at a density of 5 × 104 cells/well and treated with AEBV (0.125 to 1 mg/mL) 24 h later. On day 7 after treatment, the cells were trypsinized and fixed with ice-cold 70% ethanol and incubated at -20ºC overnight. Then, the cells were washed with PBS, treated with RNAse, and stained with PI solutions (Sigma) as described elsewhere (19). Cell distribution at different stages of the cell cycle was evaluated with flow cytometry (Cube 6Sysmex, Japan).

The Lentiviral vectors (pLEX-ILZ-TRAIL and pLEX-GFP) were used for Ad-MSCs transduction and characterized as in our previous study (18). The resulting Ad-MSC-TRAIL and Ad-MSC-GFP cells were used for combination therapy.

3.7. Synergistic Effect of AEBV and Ad-MSC-TRAIL on Breast Cancer Cells

Breast cancer MCF-7 cells were plated in 24-well plates at a density of 1 × 105 cells/well. The next day, they were treated with AEBV (0.5 mg/mL) for 24 h and then co-cultured with different ratios of Ad-MSC-TRAIL on transwell inserts 0.4 um for another 48 h. The cell viability of lower MCF-7 cells was investigated by the MTT assay.

The morphology of Ad-MSCs is shown in Figure 1. In the control group, the cells had spindle-shaped, fibroblast-like morphology. In AEBV (0.125, 0.25, 0.5, and 1 mg/mL) treated groups on day 7, the shapes of the cells were similar to those of the control group. However, at the 2 mg/mL group, while there was no change on day 1, a little rounding-up was shown on other days. 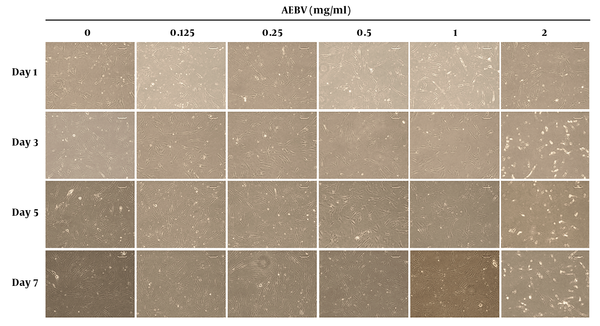 Effect of AEBV treatment on Ad-MSCs morphology. Ad-MSCs were treated with AEBV (0.125 to 2 mg/mL) for seven days. The morphology of the cells was monitored with an inverted microscope.

Cell viability was analyzed using the MTT assay on days 1, 3, 5, and 7. As shown in Figure 2, there were no significant differences on day 7 in the AEBV-treated group with concentrations of 0.125 - 1 mg/mL, but a noticeable reduction in cell viability was observed at the concentration of 2 mg/mL (P < 0.001). 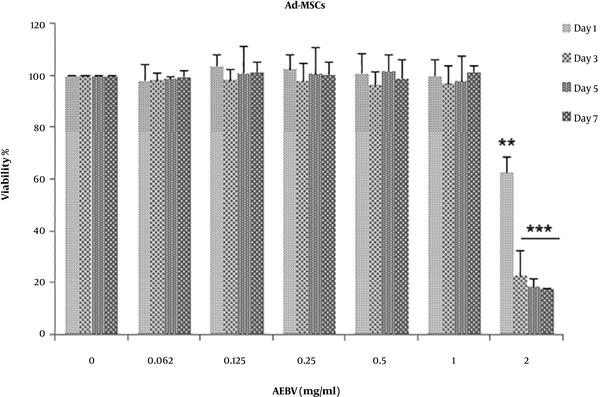 4.3. AEBV Had No Significant Effect on Cell Cycle Distribution of Ad-MSCs

The cell cycle of Ad-MSCs was evaluated on day 7 after treatment by flow cytometry. The results showed that AEBV (0.125 - 1 mg/mL) treatment induced no significant changes in the dissemination of cells in different phases of the cell cycle compares to the control group (Figure 3). 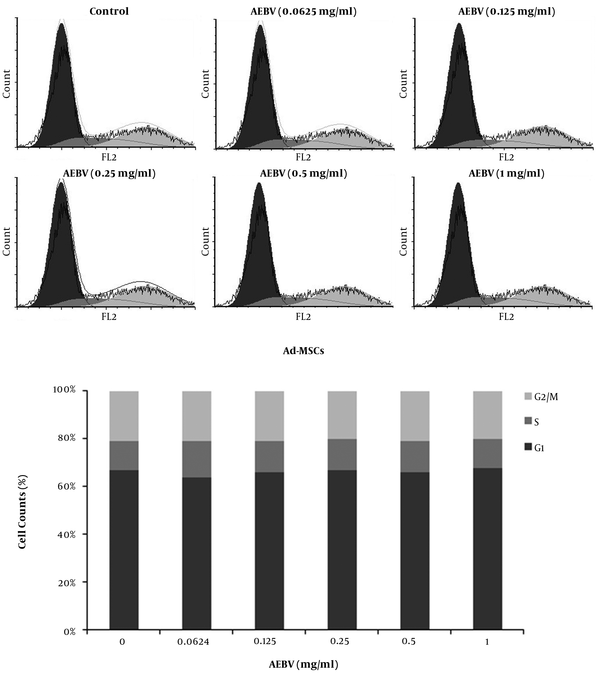 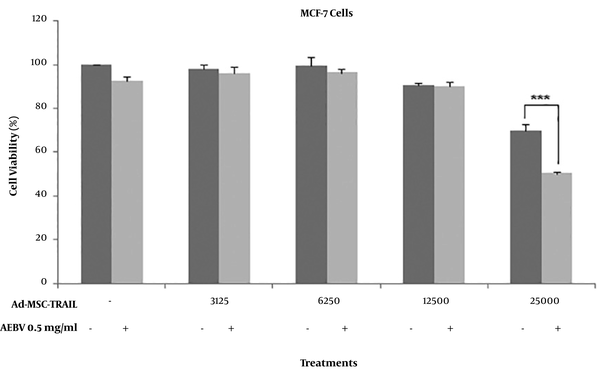 In this study, we evaluated the effects of AEBV on the morphology, viability, and cell cycle of human Ad-MSCs for the first time. According to the results, the concentrations below 1 mg/mL did not exert any cytotoxic effect on Ad-MSCs, but higher concentrations changed cell morphology into round shapes and reduced cell viability in a time-dependent manner. We also demonstrated that the combination of low-dose AEBV resulted in the sensitization of breast cancer MCF-7 cells and enhanced Ad-MSC-TRAIL-induced cell death.

The morphology of Ad-MSCs up to 7 days at low concentrations was similar to the morphology of the untreated control group, and they had a spindle-like shape, but at high concentrations, as time passed, the shapes of treated MSCs showed differences, and they became rounder. Our results are in line with a study that investigated the effect of Asiasarira Dixonon MSCs derived from gingiva and showed that at a high concentration, the shape of MSCs became rounder (20). However, in another study, as microscopic observations showed, there were no variations in the morphology of MSCs isolated from periodontal tissues when treated with Angelicaedahuricae radix (21).

To our knowledge, the effect of AEBV had not been tested on the cell cycle of Ad-MSCs. The flow cytometry results did not show any differences among control and treated Ad-MSCs at concentrations below 1 mg/mL; so, it seems that AEBV had no significant effect on the distribution of cells in different phases of the cell cycle. Another study investigated the effect of berberine (isoquinoline alkaloids of B. vulgaris) on the neuronal differentiation of MSCs; its cell cycle data showed that berberine induced G0/G1 cell cycle arrest and apoptosis (23).

In the case of the synergistic effect on breast cancer toxcicity, we evaluated the combination effect of AEBV and Ad-MSC-TRAIL on MCF-7 cells as an in vitro model. As shown in our previous study, MCF-7 cells were semi-resistant to Ad-MSC-TRAIL (18). However, in our current study, we found that a combination of low-concentration AEBV elevated the potential of Ad-MSC-TRAIL in killing MCF-7 cells. However, further studies are needed to identify the mechanisms behind this combination therapy.

Copyright © 2020, Jentashapir Journal of Cellular and Molecular Biology. This is an open-access article distributed under the terms of the Creative Commons Attribution-NonCommercial 4.0 International License (http://creativecommons.org/licenses/by-nc/4.0/) which permits copy and redistribute the material just in noncommercial usages, provided the original work is properly cited.
download pdf 3.46 MB Peer Review Comments ( 180.42 KB) Get Permission (article level) Import into EndNote Import into BibTex
Number of Comments: 0