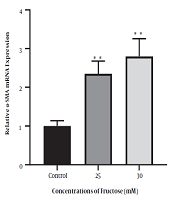 Liver fibrosis is a reversible response to wound-healing that occurs in most forms of chronic liver damage, beginning with the activation of hepatic stellate cells (HSCs). The increased expression of genes, such as beta-converting growth factor (TGF-β) and actin-alpha smooth muscle (α-SMA) indicates the activation of HSCs. During liver damage, HSCs are activated and converted to myofibroblasts. As a result, the expression of TGF-β and αSMA genes in HSCs increases and leads to liver fibrosis. High fructose intake is known to have harmful effects on human health. Due to the persistent increase in high fructose intake via many beverages and foods in industrialized countries, much concern has been raised about the effect of fructose on liver damage, but its role in activating human HSCs has not been studied.

We aimed to investigate the effect of high fructose concentration on human HSCs activation by measuring the level of mRNA expression of TGF-β and α-SMA genes involved in liver fibrosis.

Human HSCs were cultured in Dulbecco’s Modified Eagle’s Medium (DMEM) plus 10% Fetal Bovine Serum (FBS) at 37°C in 5% CO2. Cells were incubated in media containing 25 and 30 mM fructose for 48 h. The control group was incubated in DMEM without fructose. The cells were serum-starved for 24 h before treatment. Then, the total RNA was extracted, reversely transcribed into cDNA, and underwent Quantitative Real-time PCR (qRT-PCR).

The results indicated that the mRNA expression of TGF-β and αSMA genes significantly increased by treating with 25 and 30 mM fructose in HSCs when compared to the control group (P < 0.05).

The increase in the mRNA of TGF-β and αSMA genes is used as a standard marker for HSC activation, leading to liver fibrosis. The results demonstrated that high fructose concentration could activate HSCs and increase the levels of TGF-β and αSMA in these cells. Thus, controlling fructose consumption and identifying the mechanism of fructose action is important to treat and reduce liver injury.

Liver fibrosis is a wound-healing reaction that occurs after chronic liver injury due to the activation of Human Stellate Cells (HSCs). The causes of liver fibrosis in industrialized countries are chronic viral hepatitis, alcohol toxicity, nonalcoholic fatty liver disease, and autoimmune diseases, which can lead to cirrhosis, liver carcinoma, or even death (1, 2). Human stellate cells are the main mediators of liver fibrosis that significantly proliferate and produce several pathogens extracellular material during liver fibrosis (3). During the injury, HSCs undergo a transition to proliferate, profibrogenic, and contractile myofibroblasts, during which they lose their normal stellate shape and produce excessive Transforming Growth Factor-beta (TGF-β) and actin-alpha smooth muscle (α-SMA) (1, 4). Transforming growth factor-beta is a proinflammatory factor whose expressed increases with the activation of HSCs, which, in turn, further increases the activation of HSCs and initiates liver fibrosis (1, 5). Transforming growth factor-beta is a cytokine in the liver that indirectly induces α-SMA expression by increasing the activation of HSCs (6). It is important to know the factors that activate HSCs and progress to liver fibrosis.

There is ample evidence that fructose acts as a proinflammatory agent. It may cause liver damage by producing reactive oxygen species, saturated fatty acids, mitochondrial damage, and endoplasmic reticulum stress. Fatty acids made from fructose are completely saturated and are produced when the cell has enough energy, so they are not physiologically oxidized and are more likely to damage liver tissue (7). Researchers speculate that fructose, at the molecular level, induces changes in tissue and cartilage and disrupts normal tissue function. In previous studies, high fructose intakes in rats have been shown to cause overweight and lead to a fatty liver (8). Therefore, a more accurate study of the effects of fructose can help in preventing many metabolic and diseases that are common in the world. According to these studies, our attention was drawn to the role of fructose in hepatic fibrosis. Due to the persistent increase in high fructose intake via many beverages and foods in industrialized countries, much concern has been raised about the effect of fructose on liver damage, but its role in activating human HSCs has not been studied.

We aimed to investigate the effect of high fructose concentrations on human HSC activation by measuring the level of mRNA expression of TGF-β and α-SMAD genes involved in initiating liver fibrosis. 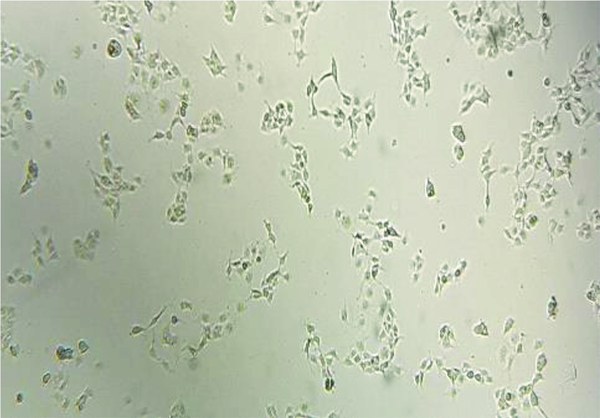 After incubation with treatment medium for 48 h, cells were washed with PBS and then incubated with 200 L of 0.5 mg/mL MTT for 4 h at 37°C in the dark. The supernatant was removed, and 100 L of DMSO was added to completely solubilize formazan. A microplate reader was used to read the absorbance of the reduced intracellular formazan product. The results were expressed as the percentages of viable cells relative to control cells. The cell survival percentage at concentrations of 35 and 40 Mm fructose significantly was reduced when compared to the control group, so the concentrations of 25 and 30 Mm fructose were selected (Figure 2).

3.5. Treatment of Hepatic Stellate Cells with Different Concentrations of Fructose 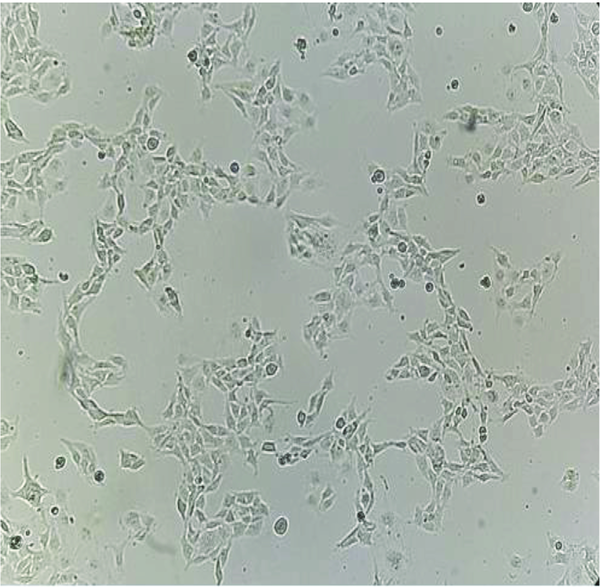 The GAPDH gene was used as an internal control to correct the expression of target genes.

The primers used, purchased from Sinaclon (Iran), were as follows:

After collecting the cells, the total RNA was extracted by using the kit from Yekta Tajhiz Azma Company (Iran) according to the manufacturer's instructions and using a NanoDrop device. An acceptable ratio of 260/280 was considered for pure RNA. Then, the synthesis was performed using the Yekta Tajhiz Azma cDNA kit according to the manufacturer's instructions with pre-designed primers. The next step was to determine the mRNA expression of TGF-β and α-SMA genes using the RealQ Plus 2x Master Mix Green "low Rox" kit (Amplicon, Denmark) by Applied Biosystems QuantStudio. Finally, real-time PCR was done.

All experiments were performed in triplicate. All data are presented as Mean ± Standard Derivation (SD). The statistical significance was determined using the one-way Analysis of Variance (ANOVA), followed by a multiple post hoc test (LSD). Differences were considered statistically significant at P values of < 0.05.

4.1. Expression of TGF-Β Gene After Treatment of Cells with Fructose

To investigate the effect of high fructose concentration on mRNA of the TGF-β gene, cells were treated and incubated with concentrations of 25 and 30 mM fructose for 48 h. The results showed that the mRNA expression of the TGF-β gene increased significantly after 48 h when compared to the control group (Figure 4). 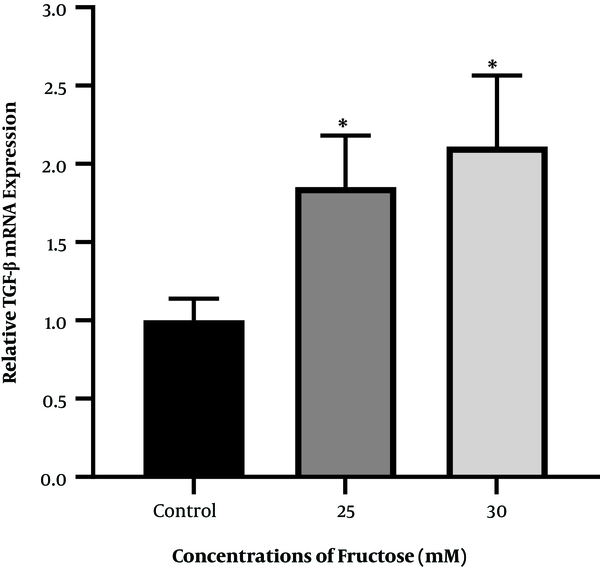 Diagram of TGF-β gene expression in fructose-treated human hepatic stellate cells at concentrations of 25 and 30 mM fructose after 48 h of incubation (* P < 0.05 for fructose-treated groups compared to the control group).

4.2. The Expression of Α-SMA Gene After Treatment of Cells with Fructose

To investigate the effect of high fructose concentration on mRNA of the α-SMA gene, cells were treated and incubated with concentrations of 25 and 30 mM fructose for 48 h. The results showed that the expression of the α-SMA gene increased significantly after 48 h when compared to the control group (Figure 5). 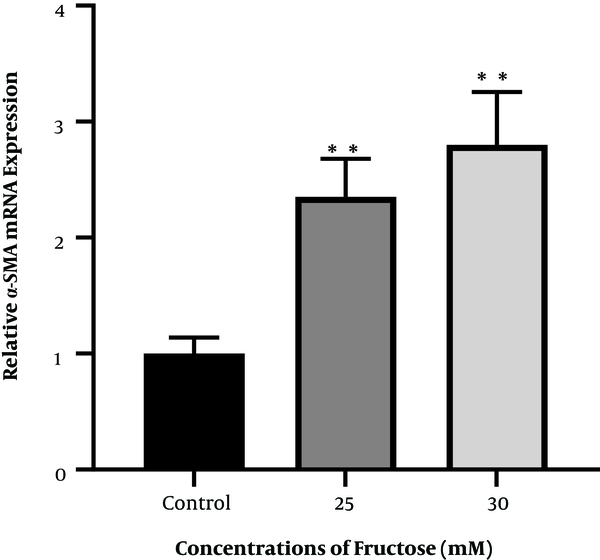 Diagram of α-SMA gene expression in fructose-treated human hepatic stellate cells at concentrations of 25 and 30 mM fructose after 48 h of incubation (** P < 0.01 for fructose-treated groups compared to control group).

When liver tissue is exposed to damage and inflammation for various reasons such as chronic consumption of alcohol, hepatitis virus, nonalcoholic fatty liver disease, genetic disorders, inherited metabolic diseases, and vitamin A deficiency, it eventually becomes injured (2). The liver first heals the injury, but if the injury and inflammation become chronic, the liver does not heal and becomes fibrotic, and it no longer functions normally. One of the important reasons for liver fibrosis in advanced and industrial societies is the use of unhealthy food. Thus, changing the lifestyle and eating healthy foods play significant roles in the prevention of this disease (11).

The only way to treat advanced liver fibrosis or cirrhosis is currently liver transplantation. Transplantation of the whole or part of the liver tissue is the sole treatment for patients with acute liver cirrhosis. It has its own problems and complications, so it is important to know the factors that activate the genes that are involved in and facilitate liver fibrosis. In this disease, by activating the TGF-β signaling pathway, due to inflammatory factors and cytokines, hepatic stellate cells are also activated, and the expression of TGF-β and αSMA genes increases; thus, liver fibrosis occurs (12). The role of fructose in the expression of genes involved in liver fibrosis, including TGF-Β and α SMA, has not been studied in human HSCs and whether fructose can activate human HSCs is unknown. To answer this question, HSCs were cultured in the laboratory and treated with concentrations of 25 and 30 mM fructose for 48 h. The study showed that fructose at the concentrations of 25 and 30 mM activated human HSCs and increased the mRNA expression of TGF-Β and α-SMA genes.

High concentrations of fructose could significantly increase the mRNA expression of TGF-Β, and α-SMA genes in HSCs, so a high concentration of fructose can be a factor to activate HSCs. In previous studies, TGF-β and ethanol have been shown to activate HSCs and increase the genes involved in hepatic fibrosis, and thus, they have been used in the laboratory to make the liver fibrosis model (13, 14). According to the results, we again emphasize the role of healthy nutrition in the prevention of diseases. Everyone, especially those with metabolic diseases such as patients with diabetes and fatty liver, should be careful about the amount of fructose they consume in their diets and limit their intake.

In general, the present study showed that high concentrations of fructose could activate HSCs and increase the mRNA expression of TGF-β and α-SMA.