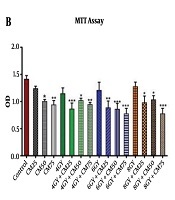 While radiotherapy is the important modality in the treatment of breast cancer cells, radioresistance of some tumor cell lines such as MDA-MB-231 is still a limitation that must be considered.

The present study was done to examine the effect of the conditioned medium of the human umbilical cord Wharton's jelly stem cells (hWJSCs + CM) on the radiosensitivity of MDA-MB-231 cells in combination with megavoltage-radiations.

Groups are Control, CM, GY, and GY + CM. In irradiation groups, breast cancer cells were exposured with 4, 6, and 8 Gy radiation. Each group includes different doses of the conditioned medium of hWJSCs (25%, 50%, and 75%).

Treatment of the MDA-MB-231 cells with hWJSCs + CM plus radiotherapy inhibited the growth and proliferation of cancer cells and this method is a novel strategy for breast cancer therapy by overcoming radioresistance.

Among females, breast cancer with 24.2% incidence and 15% mortality is the leading cause of cancer-related death (1). Radiotherapy is a considerable treatment; however, its curative effect is sometimes restricted by radioresistance of some cancer cell lines (2). MDA-MB-231, the triple-negative breast cancer (TNBC) cell line, is radioresistance (3). To enhance the radiosensitivity of aggressive breast cancer cells (2), some novel agents, such as mesenchymal stem cells (MSCs) (4, 5) were identified by radiation oncologists. Some reports have shown that MSCs could restrain tumor growth (6, 7), while other studies have demonstrated the contribution of MSCs to tumor progression and metastasis (8, 9). In this research, we used the gelatinous human umbilical cord Wharton's jelly stem cells (hWJSCs) with the advantage of the ease of access and displaying proper cell surface marker expression along with multipotency (10). It has been shown that hWJSCs with a special transcriptome outline exhibited high-level expression of pro-apoptotic and tumor suppressor genes, which were not observed in cancer cells, other MSC types, and in pluripotent embryonic stem cells (11). In addition to MSCs, the conditioned medium of MSCs could reduce cancer cell proliferation (7).

TNF-α, as a pro-inflammatory cytokine, is released by inflammatory cells, which may be involved in associated carcinogenesis inflammation (15). This cytokine has two bioactive forms of transmembrane TNF-α (tmTNF-α) and secretory TNF-α (sTNF-α) (16). Discharge of tmTNF-α by cancer cells inhibits them from cell death (17). There is a correlation between the expression of tmTNF-α and radioresistance (16). In fact, this correlation is via tmTNF-α-mediated reverse signaling that leads to the promotion of tumor development and radioresistance. The sensitivity of breast cancer cells to radiation was enhanced when the tmTNF-α expression was inhibited in vitro.

In this research, hWJSCs + CM was used to prospect how the offensive MDA-MB-231 cells respond to MSC therapy with the mega-voltage radiation, and to explore the possible underlying mechanisms of cytokines, such as IL-6 and TNF-α, involved in the apoptosis and proliferation of MDA-MB-231 breast cancer cells.

The MDA-MB-231 and hWJSCs cells were cultured up to 40% - 50 % confluence. Then, the medium for MDA-MB-231 cells was replaced with DMEM and 10% FBS. The medium for hWJSCs cells was replaced with DMEM/F12 medium and 10% FBS. MDA conditioned medium (MDA + CM) and hWJSCs conditioned medium (hWJSCs + CM) were collected after 3 days and stored at -80°C.

MDA-MB-231 cells were seeded at a density of 1.2 × 104 cells/well into 96‐well plates. The next day, the medium in the control group was replaced with DMEM, and the media in CM and Gy + CM groups were replaced with condition medium of hWJSCs mixed with DMEM containing 10% FBS (3:1, 1:1, 1:3). The media in Gy groups were replaced with condition medium of MDA mixed with the same amounts of DMEM, containing 10% FBS (1:1). The cells were irradiated 48 h after seeding. Forty-eight hours after radiation, the medium was replaced with a fresh medium containing 0.5 mg/mL MTT. After incubation for 4 h at 37°C, the MTT solution was removed and 100 µL of dimethylsulfoxide was added. The optical density (OD) was measured at 570 nm (ELx808 microplate reader, Biotech, Winooski, VT).

All independent experiments were triplicated. Data were analyzed by two-tailed Student’s t-test or Two-way ANOVA using GraphPad Prism 5.0 software. A P < 0.05 was considered statistically significant in all experiments. 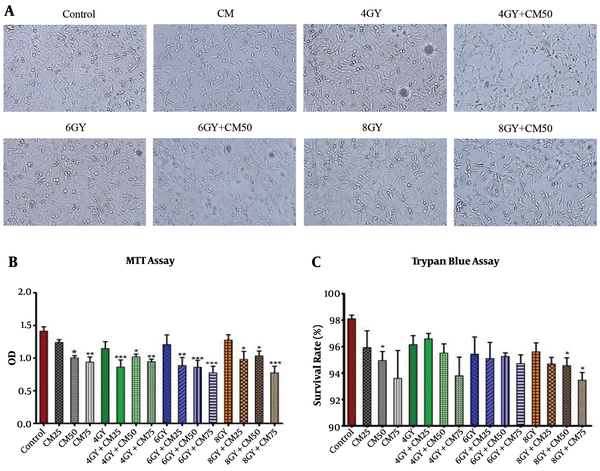 The expression of IL-6 was significantly up-regulated in 4 Gy + CM50, 8 Gy + CM50, and 8 Gy + CM75 groups compared with the control group, rather than Gy groups (Figure 2A). It seems that at higher doses of condition medium of stem cells, the rate of accession was greater. 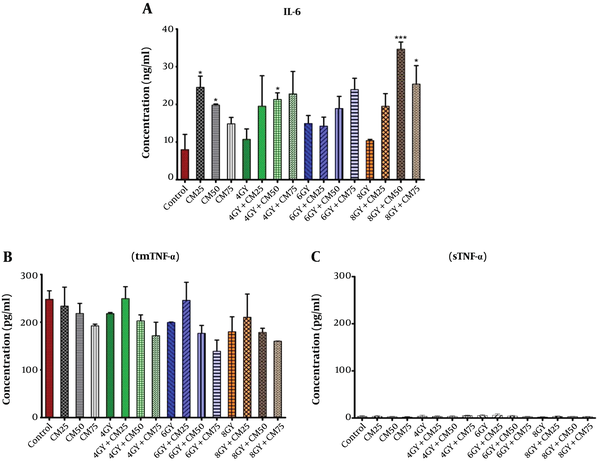 The concentration of sTNF-α was extremely very low (Figure 2C), while the concentration in the tmTNF-α was considerable (Figure 2B). This means that TNF-α was produced in the intracellular region of MDA-MB-231 cells in control, CM, Gy, and Gy + CM groups, but the secretion of sTNF-α was impaired in the extracellular region. The amount of tmTNF-α decreased in all groups compared with the control group, but this decrease was not significant. It seems that at higher doses of condition medium of stem cells, the rate of reduction was greater.

Radiation primarily causes cell apoptosis, which is defined as radiosensitivity (18, 19). Due to the mutation of the p53 gene and consequent radioresistance of MDA-MB-231 cells, a few treatment options are available to induce apoptosis in these cell lines (20). Previous studies using cell co-culture indicated that hWJSCs have anticancer effects via cell-to-cell and non-cellular contact. It has been shown that the radiotherapy effect on cancers was enhanced by MSCs probably through intensification of cancer cell apoptosis and hindrances of tumor cell proliferation (4). It has been demonstrated that condition medium of the human umbilical cord of MSC (HUCMSC + CM) could inhibit MDA-MB-231 cell proliferation, migration, and angiogenesis and promote DNA damage after radiotherapy, likely by inhibiting the Stat3 pathway (2). In this research, by MTT and Trypan blue assays we showed that cancer cells cultured in hWJSCs + CM had lower proliferative activity and hWJSCs + CM exhibited the potential to suppress the growth of cancer cells in vitro (Figure 1). Our results confirmed the restrictive effects of hWJSCs + CM with radiation on cancer cells, which is consistent with the findings of Ganta et al. (21) and Ayuzawa et al. (22). Also, He et al. (2) showed that hUCMSC + CM is able to suppress MDA-MB-231 cells by inhibiting Stat3 activation and its negative-acting downstream gene expression. Different cytotoxic factors, such as ionizing radiation and MSC + CM may exhibit tumor-selective killing action in the cancer cells, probably because of crosstalk between proliferation inhibition pathways and cell death (23). In other words, MSCs probably through inhibition of tumor cell growth and improvement in tumor cell apoptosis increase the radio-therapeutic effects in cancers (4). Furthermore, due to releasing DNA, RNA (24), or exosomes from the MDA-MB-231 and MSC cells, MSC + CM with radiotherapy may lead to improve the interactions between tumor cells and condition medium of MSC, resulting in enhancing secreted miRNAs that could suppress the tumor cells (25, 26).

The mechanism that IL-6 controls the level of the acute inflammatory response is upregulating anti-inflammatory molecules, and conversely downregulating the expression of pro-inflammatory cytokines, including TNF-soluble receptor (27) via classical signaling. Classical signaling activates the anti-inflammatory pathways and promotes the regeneration of tissues (14). For increasing the radiosensitivity of the MDA-MB-231 cell line toward radiation, the tmTNF-α expression must be banned, because secretion of tmTNF-α by cancer cells prevents them from apoptosis. Schindler et al. showed that IL-6 did not stimulate TNF but had a suppressive effect on the production of TNF. The suppressive effect of IL-6 on TNF was observed at the transcription level and might be particularly important in cell types that express large amounts of IL-6 (28, 29). Moodly et al. (30) showed that hWJSCs have anti-inflammatory properties with reduced expression of inflammatory mediators, like TNF-α. In fact, the mechanism of hWJSCs-induced improvement is unclear but may include the activation or inhibition of key cytokines, such as TNF-α. Yo et al. showed that once a tumor expresses tmTNF-α, because of constitutive activation of NF-kB through tmTNF-α reverse signaling (17), tumor cells are resistant to apoptotic stimuli, including chemotherapy and radiotherapy (31). Thus, a decrease in tmTNF-α expression and its reverse signaling can sensitize tumor cells to apoptosis (32). Our results showed that a considerable amount of tmTNF-α expressed by irradiated MDA-MB-231 cells grown in MSC + CM compared with an insignificant amount of sTNF-α. The amount of tmTNF-α in the Gy + CM groups was lower than the control and Gy groups that means by increasing the level of IL-6 in the Gy + CM groups, the tmTNF-α will decrease. This mechanism may enhance the radiosensitivity of cancer cells.

Ma et al. (9) showed that in laboratory conditions, HUCMSC banned the growth of MDA-MB-231 cells in a dose-dependent manner and this inhibitory effect was enhanced by increasing the concentration of HUCMSC. Gauthaman et al. (33) indicated that by an increase in the dose of the conditioned medium of hWJSCs, a reduction in the growth and proliferation of MDA-MB-231 cells has been occurred. We used radiation plus hWJSCs and indicated that the radiosensitivity of breast cancer cells was enhanced by an increase in doses of condition medium of hWJSCs.

In fact, the secreted cytokines and tumor suppressor proteins lead to a considerable improvement in the biological effects of ionizing radiation on tumors against MDA-MB-231 breast cancer cells. Tumor suppressing effects of hWJSCs introduced a new perspective to cancer cell biology and therapeutics and made it an attractive method for use in the future clinical application.