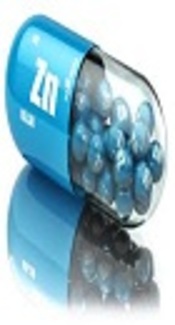 Protective or Deteriorative Effect of Zinc Ions on Protein Misfolding: A New Insight into Amyloidogenic Disease

Insulin as a small molecule with 51 residues is an interesting model useful in studying protein misfolding of neurodegenerative amyloid proteins. Investigating zinc effects on insulin misfolding and aggregation triggered by 80% ethanol is the main objective of the present work. Using different methods of turbidity measurement, examining thioflavin T fluorescence changes during insulin aggregation, and conducting Far-UV circular dichroism spectroscopy of the process, we studied insulin aggregations in the presence of micromolar and millimolar concentrations of zinc ions to shed light on the mechanism of misfolding in these circumstances. Our findings confirmed that millimolar concentrations of zinc protect insulin integrity against acidic pH, high temperature, and 80% concentration of ethanol as misfolding inducer. We hypothesize zinc to be of therapeutic importance in amyloidogenic disease in case it is applicable.

Neurodegenerative disorders, Alzheimer, Parkinson, and type II diabetes mellitus, are caused by the formation and extracellular deposition of fibrillar amyloids for certain proteins (1-3). There are increasing reports indicating the involvement of biometals, e.g. zinc and copper, in this process (4-6). The fibrillation process consists of three distinct steps: nucleation, elongation, and saturation (or precipitation) of amyloid fibrils. Kinetic studies of protein fibrillation show that in the first step of fibrillation, a preliminary nucleus of the partially unfolded monomer is derived from the native protein (7). This step expected to be facilitated by high temperatures, high concentrations of protein, acidic pH, vigorous agitation, detergents, and organic solvents exposure (8). In the next elongation step of fibrillation, a protofibril structure is formed by the association of the nucleus. In the last step, protofibrils are assembled to form highly ordered and thermodynamically stable structures rich in beta sheets with least water solubility (9, 10). The precise mechanism of nucleation underlying the pathogenesis of amyloidogenic diseases remains to be characterized.

Insulin is a small protein with 51 residues that make a reliable model to simulate protein misfolding experimentally. In acidic pH, high temperature, agitation, and/or in presence of organic co-solvent, insulin forms fibrillar structures in amyloidogenic diseases (11).

Insulin is composed of two chains, A-chain with 21 residues and B-chain with 30 residues. These two chains are cross-linked by two interchain disulfide bonds (CysA7 - CysB7 and CysA20 - CysB19). There is also a third intrachain disulfide bond bridge made between CysA6 and CysA11. Insulin in its secondary structure contains about 50% alpha-helical structures (including segments of A1 - A8, A12 - A19, and B9 - B19) and about 10% beta structures (segment B24 - B28). Two beta turns (residues B6-B9 and B20-B23) comprise 16% of insulin structure and there is about 24% estimated random coil structure with about 15 residues (7-12).

Ethanol as an organic solvent diminishes hydrogen bonds between water and protein backbone that decreases protein stability and pushes it toward denaturation and misfolding (13).

It was shown that zinc at millimolar concentrations chelates A-beta protein against aggregation. However, NMR experiments show that micromolar concentrations of zinc ions by decreasing the lag phase of fibrillation process accelerate fibrils formation (6, 25-29)

It is hypothesized that zinc ions have two sets of binding sites on the amyloid protein made by His and Asp residues, one site with high affinity and another with low affinity for zinc binding. These binding sites thought to be responsible for different effects of zinc on amyloidosis at different concentrations of zinc ions (30, 31).

In the case of insulin, the hexameric form, soluble in water and stable against fibrillation, is the dominant species in millimolar concentrations of zinc ions even at acidic pH of up to four (11, 32-37). Upon decreasing pH to two, this form is converted to the lower oligomers state of di and monomeric forms (38-41). At micromolar concentrations, zinc binds to high affinity binding sites on monomeric forms of insulin and pushes them toward molten globule formation, making them susceptible to unfolding and aggregation, while at high concentrations, zinc binds to low-affinity sites of hexameric forms and prevents their dissociation to monomers and blocks their aggregation (30, 31, 40, 41).

Based on miscellaneous reports and published documents, there is a clear inconsistency regarding beneficial or deleterious effects of zinc ions on amyloidogenic disease (20-26). The main purpose of the current work was to simulate insulin fibrillation at different concentrations of zinc ion to make a new look on this process, find some new evidence for this inconsistency, and add some useful comments hopefully.

Human insulin and thioflavin T were purchased from Sigma-Aldrich (USA). The rest of the chemicals used in this work were of the analytical grade. Insulin samples of 2 mg/mL were freshly prepared in an appropriate buffer prior to each experiment and its concentration was assessed at 276 nm with an extinction coefficient of 1.08 for 1.0 mg/mL.

The fibril formation was carried out in 25 mM glycine buffer (pH 2) by adding 80% v/v ethanol at 25°C temperature. Thioflavin T with a final concentration of 25 μM was used to detect fibril formation at Fluorescence emission spectra of 470-560 nm, excitation wavelength of 450nm, and scan-speed of 100 nm/min using a spectrofluorometer apparatus (JASCO Europe, Cremella, Italy, Great Dunmow, Essex, UK) with a maximum emission at 490 nm.

Circular Dichroism Measurements and spectral analysis were performed using AVIV (Lakewood, NJ) 60DS spectrophotometer and supplementary software within 250 to 190 nm range. The spectra were obtained at 25°C, 0.1 cm path length, the step size of 0.5 nm, the bandwidth of 1.5 nm, and protein concentration of 2 mg/mL in 50 mM glycine buffer pH 2.

Turbidity measurements were carried out at the 289 nm wavelength. To follow protein aggregation, a Biochrom WPA Bioware II UV/Visible spectrophotometer was used.

In order to study the formation of insulin aggregates and its progression with time, we measured insulin turbidity at 289 nm wavelength, showing a linear behavior with turbidity. Based on previous reports, protein aggregation is a time-retarded phenomenon with a lag phase of about 5 - 10 hours that is accelerated at acidic pH, high temperatures, agitation, and co-solvent addition (8-10). Our study in accordance with previous reports indicated that a high concentration (80% v/v) of aliphatic alcohols, methanol, ethanol, and propanol, promoted insulin toward aggregation in such a way to reduce the lag phase of insulin aggregation to a couple of minutes instead of hours. Figure 1 shows the effect of methanol, ethanol, and propanol on protein turbidity at 289 nm with time. As observed, the increased R group from CH3 in methanol to C3H9 in propanol with more hydrophobic property could increase the insulin aggregation rate reasonably with a power order of propanol > ethanol > methanol. Among alcohols used, ethanol was chosen for our experiments as an aggregation inducer because human beings are naturally more vulnerable to ethanol exposure by subtle fermentations that take place in foods and beverages regularly. 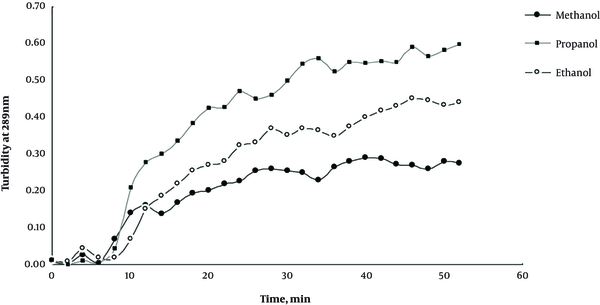 The time course measurement of insulin turbidity at a 5 mg/mL concentration accelerated by 20% v/v concentration for aliphatic alcohols, methanol, ethanol, and propanol, in glycine buffer (50 mM and pH2) at 25°C. 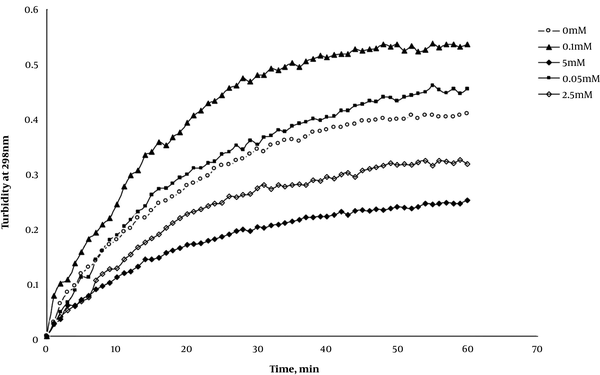 The aggregation phenomena of insulin at a 5 mg/mL concentration and 80% ethanol at different concentrations of zinc ions at 25°C in glycine buffer (50 mM and pH 2).

Thioflavin T is a fluorescent dye used routinely as an indicator chromophore to determine and quantify amyloid fibril formation during protein misfolding. This chromophore is hypothesized to intercalate within grooves in amyloid fibrils formed by solvent-exposed side chains with consequently increased fluorescence emission at 490 nm when excited at 440 nm with red-shifted characteristic peak. Figure 3 shows the fluorescence peaks of insulin, insulin + Zn (100 μM) + ethanol (80%) and insulin + Zn (5.0 mM) + ethanol (80%) samples within 450-600nm range. As it is obvious, insulin at micromolar concentrations of zinc ions (100 μM) and 80% ethanol shows a red-shifted peak with highly increased emission at 490 nm (~100%) that is characteristic for amyloid fibrils with increased beta structures.

ThT incorporation fluorescence spectra to human insulin in the presence and absence of 80% concentration of ethanol and 5 mM zinc ions incubated for 24 hours at 25°C.

Nevertheless, this figure indicated that millimolar concentrations (5 mM) of zinc prevent insulin aggregation induced by 80% ethanol, with the least increase in the ThT emission (~6%) at 490 nm. This means that zinc exerts a preservative effect against insulin misfolding; this finding is consistent with our turbidity results.

It is well documented that protein aggregation is a process accompanied by an increase in beta structures at the expense of a decrease in helical structures. In order to follow and determine the secondary structure alteration in our samples, Far-UV CD spectroscopy was used in this context as a powerful method for this purpose. Figure 4 represents Far-UV CD spectra obtained for insulin, insulin + Zn (100 μM) + ethanol (80%) and insulin + Zn (5 mM) + ethanol (80%) in glycine buffer with 50mM concentration and pH 2 at 25°C. As observed, in the absence of ethanol and zinc ions, insulin spectrum contains two minima at 208 and 222 nm showing the prevalence of alpha-helical structure that is consistent with the native structure for insulin sample. In amyloidogenic conditions, these two minima disappeared gradually indicating alpha helix disruption followed by a peak appearance at 216 nm due to the beta structure formation.

Far-UV CD spectra of human insulin (2 mg/mL) in the presence and absence of 80% v/v ethanol and 5 mM concentration of zinc ions obtained at 25°C and incubated for one hour in glycine buffer (50 mM and pH 2).

Detailed secondary structure alterations in our samples were followed by deconvolutions of CD spectra using CD Spectra deconvolution software. The results of insulin secondary structure analysis are summarized in Table 1. Our data indicate that in glycine buffer, pH 2, the amount of random coil structure was about 60% that is more than two-fold that for native insulin at pH 7 which contained about 24% of insulin residues. This finding conveys that in pH 2, such increment in insulin random coils makes insulin sensitive to misfolding by ethanol experimentally and makes insulin to become a suitable model for protein misfolding studies. Table 1 indicates that upon adding ethanol to the samples previously incubated with 100 μM zinc ions, the alpha structures decrease by about 7% at the expense of about 10% increase in the beta structure. This is while in the case of samples incubated with a 5 mM concentration of zinc ions, there is a negligible change in an alpha helix (1% increase) and beta structures (2% increase) at the expense of 3% decrease in the random coil structure. These findings confirm the protective effects of zinc ions at millimolar concentrations.

Undoubtedly, zinc as an essential trace element plays a critical role in biological processes by taking part in certain protein structures and helps to maintain their structural integrity and functionality. There are increasing reports advising zinc as medication in the management of old and newly emerged diseases (19-23). A dose-dependent or dual effect of the action is a well-known behavior in all drugs; it means each drug has an effective dose for its beneficial effect for treatment and a toxic dose for their unwanted side effects; thus, the latter is normally higher than the former.

Our findings in conjunction with previous reports indicated that the dual effect seen for zinc as supplementary medication is different so as to say that zinc at low concentrations (100 μM) exerts its side effects (misfolding induction), while at high concentrations (5 mM), zinc binds to its high-affinity binding sites and induces its therapeutic effects (misfolding inhibition) and protects proteins against aggregation (30, 31, 40, 41).

In this context, our ThT fluorescence experiments confirm that the 100 μM concentration of zinc ions caused ethanol (80%) to induce two fold aggregation with 100% increase in the ThT emission at 490 nm (Figure 3). This finding is interpreted as increased beta structure formation (32-42). When zinc concentration is increased to 5mM, the aggregation process seems to be inhibited completely because there is only 6% increase in the ThT emission, indicating the protective effect of zinc ions (Figure 3).

Copyright © 2017, Jentashapir Journal of Health Research. This is an open-access article distributed under the terms of the Creative Commons Attribution-NonCommercial 4.0 International License (http://creativecommons.org/licenses/by-nc/4.0/) which permits copy and redistribute the material just in noncommercial usages, provided the original work is properly cited
download pdf 684.76 KB Get Permission (article level) Import into EndNote Import into BibTex
Number of Comments: 0