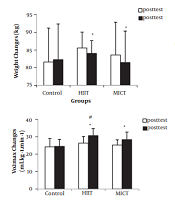 Research on the effects of interval training on lipid profile and hematological indices is limited.

Therefore, the purpose of this study was to determine the effects of eight weeks of high-intensity interval training (HIIT) and moderate-intensity continuous training (MICT) on aerobic performance, body composition, lipid profile, and hematological indices in overweight adolescents.

The results showed that except for the variables of glucose, triglyceride (TG), and low-density lipoprotein (LDL), all other variables in the HIIT group had a significant change compared to the pre-test (P < 0.05). Also, the results showed that there was a significant difference between the HIIT and control groups in fat percentage, VO2Max, high-density lipoprotein (HDL), iron, and hemoglobin value (P < 0.05).

The results suggest that HIIT training can be as effective as continuous strategy training to reduce the risk factors associated with cardiovascular disease in overweight adolescents.

The increasing prevalence of overweight and obesity in children and adolescents is a global health problem and is the cause of concerns about the potential risks of health-related problems in the immediate, short-term, and long-term periods (1-3).

The lipid profile has long been used as a standard tool to identify people who are at risk for serious cardiovascular events (4, 5). High triglyceride (TG) and cholesterol and a decrease in porous lipoprotein are important factors in increasing the risk of cardiovascular disease (6). Low-density lipoprotein (LDL) transports cholesterol from the blood to the walls of arteries, leading to atherosclerosis. If this cholesterol accumulates in the walls of the arteries that supply the heart, a person is at risk for myocardial infarction. On the other hand, large amounts of high-density lipoprotein (HDL) cholesterol are removed from the walls of the arteries and transported to the liver for excretion, which acts as a protective agent for the body (7).

Regular exercise is always one of the low-risk and healthy approaches to deal with and treat obesity. Thus, many researchers believe that exercise (endurance and resistance) may improve many bio-transformers in the body of obese people by affecting the endocrine system and causing metabolic changes (8). In this regard, the results of some studies have indicated that moderate-intensity endurance training by increasing the recall of fatty acids from subcutaneous and visceral fat sources and physiological adaptations, such as increased oxidative enzymes, capillary density, mitochondrial size, strength, and maximum aerobic and cardiovascular function can improve body composition and blood lipid profile, including TG, cholesterol, and lipoproteins (8, 9).

High-intensity interval training (HIIT) is a relatively new training method that has attracted the attention of athletes, coaches, and sports science researchers in recent years. HIIT usually refers to relatively short and interval repetitive training sessions, which is often performed with maximum effort or power or at an intensity close to VO2peak. Depending on the intensity of the workout, one try may take a few seconds to a few minutes, separated by several attempts that take more than a few minutes of rest or a low-intensity workout (10). It has been shown that in addition to reducing training time and volume, HIIT can achieve the same results compared to endurance training (10). In this regard, it has been reported that skeletal capacity for fatty acid oxidation increases during exercise following two weeks of short-term intense interval exercise. Daquinag et al. also conducted a study comparing two types of intense short-term exercise versus sub-maximal exercise for four weeks in overweight women. The results showed that short-term maximum exercise reduced body fat to a greater extent, and this reduction was greater in abdominal fat (5).

Therefore, this study was performed to determine the effect of eight weeks of HIIT and moderate-intensity continuous training (MICT) on physical fitness, body composition, and lipid profile in overweight students.

The study population consisted of all overweight male students aged 13 - 16 years in Islamabad, Kermanshah province, Iran. The sample size was selected based on the formula, a significance level of 0.05, the statistical power of 80%, the standard deviation of the main variables of the research, and target difference of the main variables. Therefore, 30 overweight male students were selected as the sample size.

The inclusion criteria included no history of infectious disease, no use of medication, no participation in regular sports activities, and participating in all training sessions. The subjects who were injured, the ones who neither meet these conditions nor participate in the training programs during the research process were excluded from the research. The characteristics of the subjects, including age, height, weight, and body mass index (BMI) are given in Table 1. In this study, the subjects were randomly divided into three groups, including the control (n = 10), HIIT (n = 10), and MICT (n = 10) groups, according to simple random sampling. Serum levels of TG, total cholesterol (TC), LDL, and HDL were analyzed using special kits (Pars Azmon Company, i24 model, made in Iran). Also, iron and hemoglobin levels (cell counter model Simex KX) and serum glucose levels were measured using Pars Azmon company kit (glucose oxidase method) (6, 7). Beep test and Jackson/Pollock method were used to measure the aerobic performance and fat percent. This research was conducted based on ethical standards in the research of Helsinki Statement and approved by the Ethics Committee of Razi University (IR.RAZI.REC.1398.008).

Table 1. Changes in Body Composition and Aerobic Performance Indices of the Studied Groups

c Significant differences compared to changes in the delta value (∆) of the control group (P < 0.05).

Exercise programs were performed for eight weeks and three sessions per week. Each training session for both training groups began with a 7-minute warm-up and ended with a 5-minute cool-down. High HIIT began with 4 sets of running (3: 30 minutes) and an intensity of 80 - 70% of the maximum heart rate in the first and second weeks, increased to 4 sets of 4 minutes with an intensity of 95 – 85% in the eighth week. Active rest between sets consisted of three minutes of fast walking. MICT also started with continuous running (12 minutes) in the first week and increased to 25 minutes with an intensity of 70 - 60% of maximum heart rate in the eighth week. The subjects in the control group continued their inactive lifestyle (8, 9). 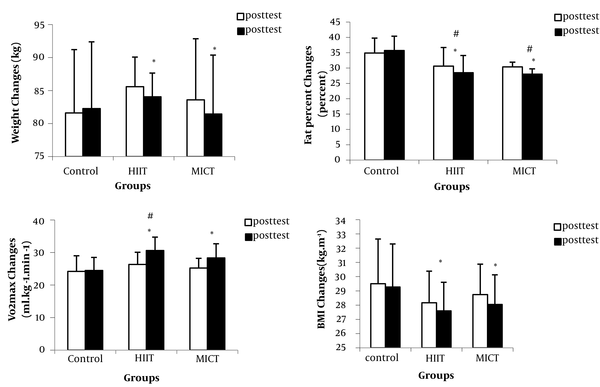 Table 2. Changes in Hematological Variables of the Studied Groups a

c Significant differences compared to changes in the delta value (∆) of the control group (P < 0.05). 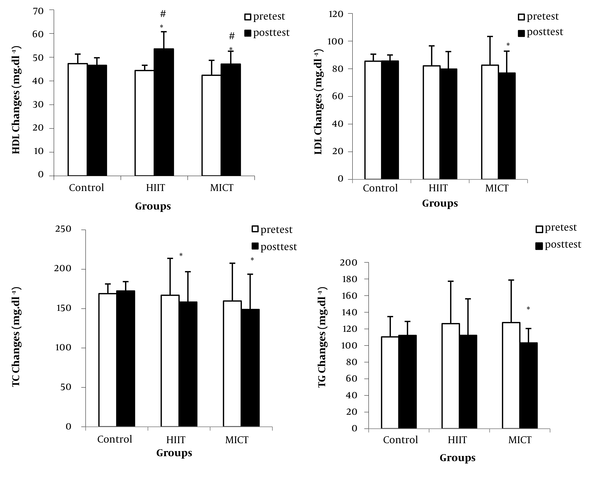 According to the results of the present study, after eight weeks of HIIT and MICT, there was a significant decrease in weight, BMI, and body fat percentage, but there was no significant difference between HIIT and MICT regarding the mentioned variables. In the present study, weight loss may be due to the effect of aerobic and anaerobic exercise (interval and continuous). The results of the present study are in line with the results of Garcia-Hermoso et al. (10) and Marandi et al. (11). They concluded that the intensity of continuous aerobic exercise has an important role in weight loss and improving BMI (10, 11). Both interval and continuous activity use the fat stores due to increased mitochondrial density, the capacity of oxidative enzymes, increased activity of enzymes in the electron transfer chain, the activity of enzymes involved in the oxidation of fats, and increases the oxidation and activity of lipoprotein lipase (12, 13)

The results showed that the VO2max of overweight subjects increased significantly compared to the pre-test after eight weeks of HIIT and MICT. HIIT training compared to MICT training causes similar adaptations in cardiorespiratory fitness and endurance performance. Bickham et al. showed that they could not cause a significant change in VO2max despite running using an intense interval exercise program for six weeks (14). This difference may be related to the initial level of VO2max of the subjects in the pre-test. It seems that there is a significant and negative relationship between VO2max levels in the pre-test with an increased percentage of changes in post-test. These findings are in line with previous studies (14).

The results of the present study showed that HDL and TC values after HIIT and MICT increased and decreased significantly, respectively. However, TG and LDL values decreased significantly compared to pre-test only after MICT, but they did not change significantly in the control and HIIT groups. These results are in line with the research by Silva et al. (15), Da Silva et al. (16), and Koubaa et al. (17), who investigated the effect of HIIT and MICT exercises on the fat profile of overweight adolescents . The results showed a significant improvement in lipid profile factors in both training groups (16, 17). An increase in the activity of the lecithin cholesterol acyltransferase, which is responsible for the transfer of cholesterol ester to HDL, and a decrease in the activity of the protein plasma cholesterol transferase, which is responsible for the transfer of HDL cholesterol ester to other lipoproteins, may be involved. Other mechanisms, such as changes in plasma hormone concentrations, lipoprotein lipase, and other factors may be involved in these changes (17, 18).

Also, only the MICT group was found with a significant decrease in fasting glucose compared to the control group. Consistent with the present study, Heidary et al. showed that eight weeks of aerobic resistance interval training did not lead to a significant change in fasting blood glucose and insulin (19). It seems that the lack of effect of interval and continuous exercises on fasting glucose in the present study can be attributed to differences in exercise intensity (19).

A significant increase in hemoglobin and iron levels after eight weeks of HIIT and MICT was the final finding of this study. In general, our results contradict some of the findings reported by Ahmadi and Abdiyan (20). Given that in some studies, the subjects were trained athletes, it is possible that their activity was accompanied by process of hemolysis. The reason for this can be found in some differences, such as the type of exercises performed, the intensity of the exercises, gender, and the level of readiness of the subjects. According to previous studies, in trained athletes, the number of red blood cells and hemoglobin is lower than in non-trained individuals (20).

The use of the HIIT program with the intensity of 85 - 95% maximum heart rate is the strength of this study because this intensity has not been used in previous studies. The small sample size due to the lack of available volunteers is one of the limitations of this study. Therefore, we propose to perform the same research using large sample sizes. The period of the training program is also another limitation, which might have affected the results.

Copyright © 2021, Jundishapur Journal of Health Sciences. This is an open-access article distributed under the terms of the Creative Commons Attribution-NonCommercial 4.0 International License (http://creativecommons.org/licenses/by-nc/4.0/) which permits copy and redistribute the material just in noncommercial usages, provided the original work is properly cited.
download pdf 206.53 KB Get Permission (article level) Import into EndNote Import into BibTex
Number of Comments: 0