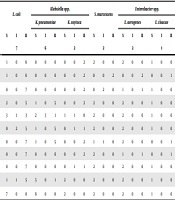 The resistance rate of carbapenem-resistant Enterobacteriaceae (CRE) is increasing yearly but rarely reported in children.

Some CRE isolates were collected from infected pediatric patients in Liaocheng People’s Hospital from January 2014 to December 2019. The strain identification and antimicrobial susceptibility testing were conducted using Vitek mass spectrometry and the Vitek 2 system, respectively. The carbapenemase genotypes of blaKPC, blaIMP, blaVIM, blaNDM-1, and blaOXA-48 were each detected by polymerase chain reaction and sequencing. The molecular homology analysis of strains was conducted via Pulse-field Gel Electrophoresis (PFGE). The clinical data of CRE-infected pediatric patients were collected from the hospital’s medical data information system.

This study found the major sources of resistance were IMP carbapenemases. Piperacillin/tazobactam is potentially effective for the treatment of CRE infection, despite insensitivity in vitro.

In recent years, carbapenem-resistant Enterobacteriaceae (CRE) species have become a serious public health threat (1-3). Common nosocomial infectious agents of Enterobacteriaceae include Escherichia coli, Klebsiella pneumoniae, Enterobacter cloacae, Serratia marcescens, etc. In children, CRE infection is uncommon but can cause significant mortality and long-term hospitalization (4, 5). For children with CRE infection, the choice of treatment drugs is more limited due to the multi-drug resistance of CRE and the drug restriction of children (6-9). The CRE species have multiple mechanisms of drug resistance, mainly through the production of carbapenemases, which challenges the selection of antimicrobial agents for treating infection (1, 3, 10).

Strains that exhibit resistance to carbapenems have been identified as containing the bla gene, including class A (KPC, or K. pneumonia carbapenemase), class B (VIM [Verona integron-mediated metallo-β-lactamase], IMP [imipenemase], and NDM [New Delhi metallo-β-lactamase]), and class D (OXA-48 [oxacillinase]) carbapenemases (11). However, the genotypes and infection sites of infected individuals have been inconsistent among various reports, and the subjects have been primarily adults. There have been a few genotypic studies and treatment programs for children, due to the lack of data from randomized evaluations of various therapeutic approaches. Therefore, treatment options for children with CRE infection must refer to the adult literature, with potentially inappropriate choices of antibiotics.

The present retrospective study reviewed cases of pediatric CRE infection that occurred at a tertiary general hospital in China. Due to the lack of specific drugs for CRE infection, we empirically selected piperacillin/tazobactam as the treatment drug based on previous drug sensitivity results. Meanwhile, we tested the genotype of CRE strains infecting children to study the future treatment plan of this type of strain.

The inclusion criteria were children (age < 14 years) hospitalized in Liaocheng People’s Hospital in China from January 2014 to December 2019. Isolates included in this study were CRE strains that showed resistance to at least one carbapenem antibiotic. The research strains were obtained from qualified specimens associated with definite infection, based on the results of smear and culture, combined with clinical manifestations. The CRE isolates were consistently preserved at -80°C for research on drug resistance or nosocomial infection control. The included pediatric patients were treated in different districts of pediatric wards. The clinical infection data were compiled until death or hospital discharge, including ward, treatment, and outcome. The cases that could not be traced back were excluded.

Non-duplicate Enterobacteriaceae strains were isolated and sorted in accordance with the time of isolation. The strain identification was performed using an automated mass spectrometry detection system (Vitek MS, bioMerieux, France). Antibiotic susceptibility was adjudged by the broth dilution method according to Clinical and Laboratory Standards Institute (CLSI) breakpoint definitions (12). If the minimum inhibitory concentration (MIC) to ertapenem was elevated (MIC ≥ 2 µg/mL), further testing by the Modified Hodge test (MHT) was performed as a phenotypic confirmatory method to investigate the mechanism of resistance (13).

We used the fragmentation method to extract plasmid DNA from bacteria and amplify the genes of blaKPC, blaIMP, blaVIM, blaOXA-48, and blaNDM-1, as in our previous studies (13). The primer sequences are shown in Table 1. Then, amplified DNA was directly subjected to electrophoresis, and the amplified product showing the target band at the corresponding position was regarded as a positive specimen. The positive amplicons were sequenced by Sangon Biotech (Shanghai). The instruments and reagents used for sequencing were ABI-PRISM 3730 and BigDye Terminator V3.1. Nucleotide sequences were compared with those in databases. The statistical significance of the matches was calculated using the Basic Local Alignment Search tool (BLAST).

The pulse field gel electrophoresis (PFGE) analysis was used to determine the homology of CRE strains of the same genus. The matching restriction enzyme was XbaI. The DNA of the Salmonella serotype Braenderup H9812 strain was the standard marker. Then, the unweighted pair group method with arithmetic mean (UPGMA) was used to generate the relationship between the strains. According to the interpretation standard, more than 80% similarity in isolates of PFGE profiles were considered related strains.

Statistical analysis was performed using SPSS version 24.0 to compare the clinical cure rates of patients treated with piperacillin/tazobactam or other drugs. The percentage difference was analyzed using Fisher’s exact test (T < 1). A P value of < 0.05 was considered significant.

4.1. Classification and Distribution of CRE

During six years of data gathering in this study (2014 - 2019), 20 pediatric patients were identified with CRE infection, including seven and six patients with E. coli and K. pneumoniae, respectively, two patients each with K. pneumoniae, S. marcescens, and E. aerogenes, and one patient with E. cloacae (Table 2). Among these strains, there was no tendency for concentrated outbreaks. The proportion of CRE strains to the total number of corresponding species isolated ranged from 0.6% (E. coli) to 2.7% (E. aerogenes). Among the hospital wards, the highest rates of CRE infections were found in Neonatology and Pediatrics (six cases, each), followed by Pediatric Intensive Care Unit (PICU), Neonatal Intensive Care Units (NICU), and Pediatric Surgery (four, two, and two cases, respectively; Table 2). The CRE strains were isolated from respiratory secretions, blood samples, lavage fluids, and wound secretions (50%, 30%, 10%, and 10.0%, respectively).

The age range of patients with CRE infection was between one day and eight years, and boys were the majority (15/20, 75.0%). All patients suffered from various complications, such as prematurity, coronary heart disease, and gastrointestinal dysfunction. In addition, seven patients (35.0%) were subject to invasive procedures, such as bronchoalveolar lavage and mechanical ventilation. Sixteen patients were clinically cured, including 10 patients administered piperacillin/tazobactam as an antimicrobial treatment (Table 4). Statistical analysis showed a significant difference between the piperacillin/tazobactam treatment group and the non-treatment group (Table 5).

Table 5. The Clinical Cure Rate of Patients Treated with Piperacillin/Tazobactam or Other Drugs

In the present study, CRE strains were collected over six years in infected pediatric patients, including several common Enterobacteriaceae spp. Although the CRE infection rate was low and did not cause large-scale outbreaks, the spread of several nosocomial infection strains with the same genotype was confirmed by PFGE. In addition, the isolation of strains from multiple pediatric departments and different infection sites still concerns us regarding infection control. Clinical treatment of CRE strains poses great difficulties, due to their multidrug resistance. For children infected with CRE, there are no authoritative guidelines recommending medications. Some of the rarely published evaluations are case reports, which have significant heterogeneity in population and treatment options (14). The available data support combination therapy, but there are insufficient data to recommend a particular regimen (15-17).

In the present study, after the drug sensitivity report was obtained, no child was treated with sensitive drugs such as tobramycin, ciprofloxacin, and tigecycline because of potential associated toxicity such as ear nephrotoxicity and malformed tooth or joint development. Some cases were treated empirically with a combination of insensitive antibacterial drugs, piperacillin, and tazobactam, based on previous local resistance data statistics; these patients achieved therapeutic results. This may provide a reference for the future antibacterial treatment of pediatric CRE infections. Although some potentially toxic drugs such as tigecycline were not selected during the treatment process, these drugs are compelling options for CRE treatment in special cases. One study of the susceptibility of Enterobacteriaceae isolates collected from pediatric patients in Asia from 2004 to 2012 found that the highest susceptibility to tigecycline was shown by K. oxytoca and E. coli (100.0% each) (18). In the present study, we obtained similar results, that is, the sensitivity of CRE isolates to tigecycline was 100.0%. Although there may be potential toxicity in the use of tigecycline, such as tooth enamel issue, this agent is still used as an effective antibacterial drug to treat children with CRE infections. Adult series have also shown that tigecycline is negatively associated with mortality dose-dependently (19, 20).

Some other reports indicate that carbapenem-containing combination therapy may be more effective than monotherapy or combination therapy without carbapenem (15, 16). However, one study concerning pediatric CRE bloodstream infection reported that it could not be determined whether combination therapy with or without meropenem was more effective. For patients who received meropenem, the subgroup with an isolate with MIC > 8 mg/L had a significantly higher mortality rate (100.0%, n = 8) than patients with an isolate with MIC ≤ 8 mg/L (45.5%, n = 22) (17). This indicates that the efficacy of carbapenems is uncertain for the treatment of CRE infection in children. Although by definition, carbapenem resistance suggests that the strain has antibacterial resistance to any type of carbapenem, in the present study, the resistance rates of CRE to ertapenem (70.0%), meropenem (90.0%), and imipenem (95.0%) differed. These isolates showed higher resistance to imipenem and meropenem than ertapenem, which may be associated with the produced IMP type of carbapenemase. This may be associated with the produced IMP type of carbapenemase. Furthermore, many novel antibiotics (e.g., ceftazidime-avibactam, meropenem-vaborbactam) were active against CRE strains that do not produce metallo-β-lactamases (MBL). However, in the pediatric population, where MBLs are common, the challenge of this particular carbapenemase type is the lack of new antibiotics that are active against this isolate.

Our study found that 19 out of 20 strains produced IMP carbapenemase. This is not consistent with other reports; in many studies, the frequency of IMP production was significantly lower than this value (3, 21-24), and KPC was the main type of carbapenemase (5, 7, 8). As known, IMP-type carbapenemase is a common type of MBL, and its drug resistance gene is mediated via chromosomes or plasmids and has been widely spread in non-fermenting bacteria such as Pseudomonas aeruginosa and Acinetobacter baumannii. In recent years, strains producing IMP-type MBLs have also been found in Enterobacteriaceae, drawing widespread clinical attention. Despite this, the report of IMP-type metalloenzymes in pediatrics is very rare. In our study, it was found that pediatric patients were infected with IMP carbapenemase CRE, which is helpful to guide reasonable medication for similar infections in the future.

This retrospective analysis found 20 cases of CRE infection in pediatric patients at a single hospital. The production of IMP carbapenemases was the major resistance mechanism. It is necessary to protect common infection sites in pediatric wards rigorously to prevent the spread of CRE infections. Although these strains were demonstrated as highly resistant to antibiotics, a healing effect was achieved by administering combined piperacillin and tazobactam, despite insensitivity in vitro.