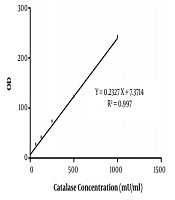 Compare Catalase Activity Between Aspergillus flavus and A. fumigatus, Isolated from Clinical and Environmental Specimens

Catalase enzyme is a potential virulence factor for Aspergillus species.

This study aimed to evaluate the catalase activity in conidium and mycelium of Aspergillus flavus and A. fumigatus isolated from environmental and clinical samples.

Forty Aspergillus species (20 A. fumigatus and 20 A. flavus) were evaluated. Species were identified using the macroscopic and microscopic criteria of the isolates on culture media and the PCR-RFLP method, using the MwoI enzyme. The activity of the enzyme was evaluated using the Amplex red catalase assay kit. The Shapiro Wilk, Kolmogorov-Smirnov, Mann-Whitney, and Wilcoxon Signed Rank tests were used to analyze the data.

The mycelial catalase activity was higher than conidia. Clinical isolates of A. flavus had similar mycelium activity to A. fumigatus. By using the information provided in the present study, the severity of aspergillosis can be predicted, which paves the way for identifying new antifungal agents.

Aspergillus species are widespread opportunistic fungi that are commonly found in different environmental conditions, particularly decomposing organic materials, soil, and air. Inhalation of Aspergillus often causes infections with high morbidity and mortality, particularly in immunocompromised individuals (1-4). Many virulence factors are developed for pathogenicity of Aspergillus species in the human, such as secondary metabolites and efflux pumps, which are tolerant (5, 6).

Catalase enzyme is a potential virulence factor for Aspergillus species. It should be considered as a virulence factor, which is a scavenger of hydrogen peroxide (H2O2). Catalase catalyzes the decomposition of H2O2 to oxygen and water (5). H2O2 inhibits the growth and viability of microbial pathogens. Conidial and mycelial catalases protect the fungus against H2O2. Catalase structure of the Aspergillus spp. is homologous to catalase of several fungi or bacteria, and it’s no different in the mycelium or conidium form of the microorganism.

Many catalase family genes are reported in conidium (cat A gene) and mycelium (cat1/cat B and cat 2 genes) of the Aspergillus fumigatus that contribute to fungal pathogens (5, 7). The core component of the antioxidant enzyme catalase (CTA1) has been reported in A. flavus (8). Conidial catalase enzyme is a dimer protein with 5.84 kD subunit, and mycelial catalase is monomeric with 82 kD, which is resistant to heat, detergent, and iron (9, 10). The inhibition of Aspergillus catalase activity by new antifungal agents can promote antifungal immunity. Therefore, evaluation of catalase activity is useful for treating patients infected with Aspergillus spp. and to predict the severity of the infection.

In this study, 20 A. fumigatus and 20 A. flavus isolates were evaluated for their catalase activities. That in each group, half of the isolates were obtained from the clinical specimen and the rest from the environment. The clinical species were isolated from clinical samples (tissue, bronchoalveolar lavage, and wound) of immunocompromised patients who were admitted in university hospitals from 2017 to 2019, with clinical signs and symptoms of the fungal infections. Simultaneously, soils from different regions of public parks were collected to culture Aspergillus isolates. Soil and clinical samples of patients were cultured on Sabouraud dextrose agar medium (Merck, Germany) and incubated at room temperature for 7 - 10 days. The isolates were identified primarily by macroscopic and microscopic examinations with a light microscope and lactophenol cotton blue staining.

The RFLP-PCR method was used for the molecular identification of isolates (11). Hyphae grown on each culture were used for DNA extraction. For lysis the cells, a small number of hyphae with 500 µL lithium acetate (Sigma, USA) and SDS (Sinagen, Iran) were put into a micro-tube and sonicated (GMBH, Germany) three times (20 seconds each). The mixture was centrifuged at 12000 g for 10 minutes. For protein precipitation, the supernatant was transferred to a new tube mixed with an equal volume of phenol/chloroform and centrifuged at 12000 g for 5 minutes. The supernatant was mixed with absolute ethanol (Merck, Germany) and 3 M sodium acetate (Merck, Germany) and stored at 80°C for 20 minutes. The tube was centrifuged at 12000 g for 10 minutes. The pellet was cleaned by ethanol alcohol (70%) and dissolved in the distilled water.

For PCR amplification a pair of primers ITS1 and ITS4 (Thermo Scientific, USA) forward: 5’-TCC GTA GGT GAA CCT GCG G -3’and reverse: 5’-TCC TCC GCT TAT TGA TAT GC-3’ with 570 bp length were used (11). To identify the DNA size of the PCR product, it was electrophoresed on 1% agarose gel (Bio-Red, USA). The Endonuclease digestion of PCR products was performed by a restricted MwoI enzyme (Thermo Scientific, USA). Ten µL of PCR products were mixed with 2 µL of enzyme-specific buffer (Tango Buffer, Sinagen, Iran), 2 µL of MwoI enzyme, and 18 µL of distilled water. The mixture was stored at 37°C for 16 hours and electrophoresed on an agarose gel, visualized, and photographed using a transilluminator (11). After digestion, the DNA of A. flavus and A. fumigatus was broken to 9, 20, 40, 65, 98, 325, and 29, 108, 125, 207 bp, respectively.

Aspergillus species were grown in a liquid medium containing 1% yeast extract (Merck Germany) in a shaker incubator for 3 days (7). Young mycelia were collected by the centrifugation of culture broth media. Mycelia were rinsed twice with 0.05 M Tris-HCl buffer (pH = 7.5). The cleaned mycelium was put on a small plate and dried with 200 µL acetone. One gram of dried mycelia was mixed with 500 µL of 10 M Tris-HCl buffer (pH = 7.8) and sonicated for 10 minutes on ice (Branson sonifier model W-185) at a power setting of 90 W. The tube was centrifuged at 100g for 15 minutes, and the supernatant was used for the catalase activity test. For evaluating catalase activity in conidia, Aspergillus species were grown on 2% malt extract agar medium (Merck, Germany) for one week at 25°C. Mixed distilled water and tween 80 was added to the plates, and conidia was collected. The concentrations of 5 × 105 to 0.5 × 105 conidia/ml in Tris-HCl (10 mM, pH = 7.8) were prepared by hemacytometer. Conidial catalase was extracted by sonication of conidia for 20 minutes on an ice bath (12). Cell debris was removed by centrifugation at 100 g for 15 minutes. The clear supernatant extract was evaluated for catalase activity.

Catalase activities were evaluated using the Amplex® Red Catalase Assay Kit A22180 (Invitrogen, UK) following instructions published by the manufacturer. The catalase standard curve was prepared by diluting an appropriate amount of the catalase solution in the kit. Reaction buffer without catalase was used as a negative control. The kit can evaluate catalase activity higher than 50 mU/mL of purified catalase by fluorometry as well as spectrometry. In this study, catalase activity was detected spectrophotometrically at 560 nm twice. The kit producer defined one catalase activity as the amount of enzyme decomposing 1.0 µmol of hydrogen peroxide.

Data were analyzed using SPSS version 18. A P value of < 005 was considered statistically significant. Normal distribution of data was assessed using the Shapiro Wilk and Kolmogorov-Smirnov tests, and the results showed that data were not distributed normally. Therefore, the Mann-Whitney test and Wilcoxon Signed Ranks test were used to analyze the data. 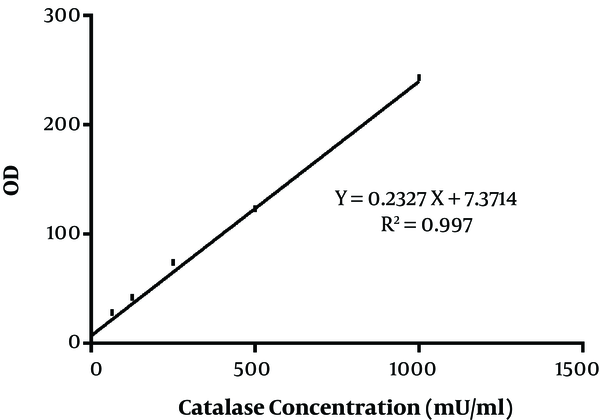 The standard curve of catalase activity according to the kit method

Catalase produced by A. fumigatus during invasive aspergillosis (14) and neutrophils from healthy patients is able to kill A. fumigatus hyphae in contrast to patients with chronic granulomatous disorders (15). The role of catalase in the pathogenicity of different Aspergillus species is well documented in the literature (7, 16). Paris et al. (7), by inducing the mutation in catalase conidium and mycelium genes, reported the catalase as one of the pathogenic factors in A. fumigatus mycelium. However, Chang et al. (16) concluded that “overall, catalases do not play a significant role in the pathogenicity of A. nidulans in p47 (phox)-/-mice” (16). Krappmann et al. (17) reported the deletion of a conidium morphology regulating gene (cat A) or the mycelium-specific gene (cat1 or cat 2) was associated with increased susceptibility to H2O2 and neutrophil killing in vitro.

But, the deletion of these genes did not affect the virulence of invasive aspergillosis in a neutropenic rat model in vivo (17). Therefore, further research is needed to evaluate the role of catalase activity in each fungus. In the present study, a significant difference was observed between mycelial catalase activity of clinical and environmental isolates of A. flavus and A. fumigatus. In previous studies, only a limited type of species was evaluated, but we investigated different clinical and environmental Aspergillus species in terms of mycelium catalase activity, which requires further attention on the part of respective researchers.

Further studies are needed to shed light on the role of catalase as a fungal virulence factor. The current study had limitations, including the low number of investigated isolates. So that by investigating more isolates, the role of the catalase enzyme in the pathogenicity of the microorganism can be better examined.

Few studies have examined catalase activity in A. flavus. Based on the findings of the present study, the mycelial catalase had higher levels of activity than conidium. The mycelial catalase activities’ in clinical isolates of A. flavus were similar to A. fumigatus. By using the information provided in the present study, the severity of aspergillosis can be predicted, which paves the way for identifying new antifungal agents.

The authors would like to thank Dr. Hassan Khajehei for English editing of the manuscript and Miss Hadis Jafarian for helping with lab methods. We are grateful to the Clinical Research Development Center of Namazi Hospital, University of Medical Sciences, Shiraz, Iran, for the invaluable help with statistical analysis.

Copyright © 2020, Author(s). This is an open-access article distributed under the terms of the Creative Commons Attribution-NonCommercial 4.0 International License (http://creativecommons.org/licenses/by-nc/4.0/) which permits copy and redistribute the material just in noncommercial usages, provided the original work is properly cited.
download pdf 473.61 KB Get Permission (article level) Import into EndNote Import into BibTex
Number of Comments: 0