Biotyping and Antimicrobial Susceptibility of Enterococcus faecalis and E. faecium Isolated from Urine and Stool Samples 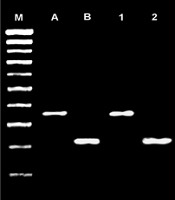 Enterococci are one of the opportunistic pathogenic microorganisms that can cause significant problems for human and animal health. Enterococcus faecium seems to be more resistant to antibiotics than E. faecalis. It is thought that pathogenic E. faecium can develop antibiotic resistance very quickly, and the ability to transfer this feature is considered to be an important health risk.

This study aimed to determine the prevalence, biotypes, and in vitro antimicrobial susceptibility of E. faecalis and E. faecium strains isolated from 267 routine urine and stool samples that were brought to the microbiology laboratory of Regional Training and Research Hospital of Van, with permission of the patients.

In conclusion, the identification of E. faecalis and E. faecium strains by PCR is reliable and faster than biochemical tests. Additionally, the results of antimicrobial susceptibility tests may provide important contributions to the clinical approach.

Enterococcus spp. are Gram-positive, facultative, anaerobic bacteria and are present as part of the commensal bacteria in the intestinal tracts of humans and animals (1, 2). They are not considered to be pathogenic (3). Some of these species are also known as the causes of causal diseases in immunocompromised hosts (4). Bacteria of the genus Enterococcus are the components of the natural microbiota of the gastrointestinal tract in both humans and animals. On the other hand, enterococci are considered opportunistic pathogens mainly responsible for nosocomial infections in humans (5), as well as many types of infections in animals such as mastitis in cattle, diarrhea in swine and cattle, and septicaemic diseases in poultry (6).

Their ubiquitous nature, resistance to unfavorable environmental factors, and the capability of the acquisition of antimicrobial resistance and virulence factors also have contributed to the increased share of Enterococcus in opportunistic infections (5, 7). Furthermore, they have now become one of the most common nosocomial infections and are also an emerging threat to public health, as they are intrinsically resistant to several antimicrobials (8-10). These species also show different patterns of antimicrobial resistance, possibly caused by various mechanisms of resistance among them (11). Enterococcus faecium and E. faecalis are major species associated with several enterococcal diseases. Enterococcus faecalis and E. faecium can produce potential virulence factors that may enhance their pathogenicity. In other words, they are responsible for diseases (3, 12). Moreover, E. faecalis and E. faecium have a highly developed ability to acquire resistance genes from the same or different species via transferable plasmids or transposons (13).

Enterococci now account for about 10% of hospital-acquired bacteremia cases globally, and they are the fourth and fifth leading causes of sepsis in North America and Europe, respectively (14). Among the medically important enterococci, E. faecium, in particular, has become a leading cause of nosocomial infections. Enterococcus faecium population analysis has revealed the emergence of a rapidly evolving lineage referred to as Clade-A1 that includes clonal complex 17 (CC17), comprising strains associated with hospital infections across five continents. These hospital strains are resistant to ampicillin, aminoglycosides, and quinolones, and their genomes contain a high number of mobile genetic elements and are enriched for genes encoding altered carbohydrate utilization and transporter proteins that distinguish them from community-acquired and nonpathogenic E. faecium strains (15).

In this study, we aimed to demonstrate the biotype profiles of E. faecalis and E. faecium strains isolated from stool and urine samples of humans and determine their in vitro susceptibility to various antibiotics by the disk diffusion method. It is thought that the results can be a source for the diagnosis and treatment protocols in diseases caused by these factors and give an idea about the steps of resistance.

In this study, we used routine urine and stool samples brought to the microbiology laboratory of the Van Regional Training and Research Hospital for the diagnosis of urinary tract or digestive system infections.

For the isolation of E. faecalis and E. faecium strains, blood agar, Edwards medium, and even Esculin agar were cultured with the help of sterile swabs from urine and stool samples, which had been thoroughly homogenized. The incubation was done at 37°C for 24 - 48 hours under aerobic conditions. The growth of S-type Esculin-positive black colonies was evaluated (16).

The multiplex PCR technique was applied as reported. Master mixes (Thermo PCR Mastermix 2x – K0171 Lithuania) were used for the amplification step. For this purpose, 2 µL bacterial DNA, 1 µL F and R primers, 25 µL mastermix were pooled and the mixture was completed to 50 µL with PCR grade water. The PCR condition was as follows: Pre-denaturation for 10 min at 96°C, followed by 35 cycles of denaturation at 95°C for 45 s, binding at 49°C for 45 s, elongation at 72°C for 60 s, and final elongation at 72°C for 10 s protocol was applied (17, 18).

Despite the known biochemical characteristics of enterococci, variations can be observed in the biochemical features of many field strains. These variations can cause problems and may lead to wrong identification. Therefore, it holds great importance to determine the biotyping profiles of strains identified by molecular methods. Biotyping of the isolates identified as E. faecalis and E. faecium by molecular techniques was conducted by hemolysis tests, growth in 6.5% NaCl media, hydrolysis of esculin and arginine, H2S production, indole, motility, fermentation of L-arabinose, arbutin, galactose, trehalose, D-glucose, mannitol, D-raffinose, salicin, lactose and sorbitol tests (16, 19, 20).

A statistical anlaysis was carried out using the cluster variable method in the Minitab package program (Demo Ver-16).

Preliminary identification of Enterococcus spp. was based on phenotypic characteristics, such as esculin positive, brown-black S type colony-forming, Gram-positive, single, double, or chain-shaped catalase-negative cocci. A total of 187 Enterococcus spp. including 119 (67.2%) from 177 urine samples and 68 (75.5%) from 90 stool samples were isolated and identified. 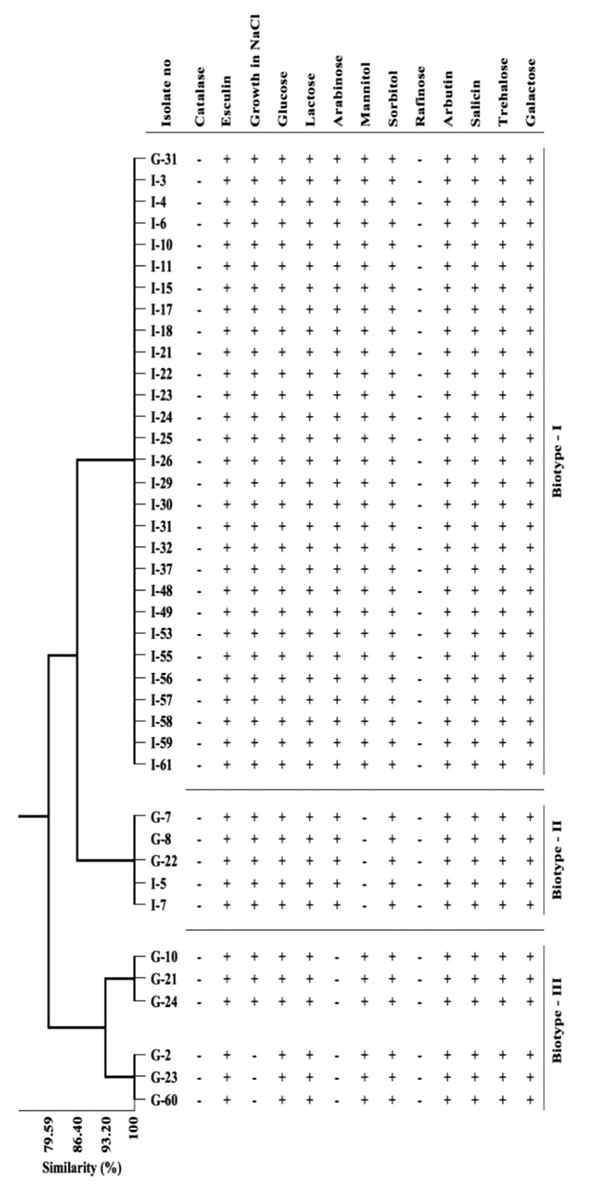 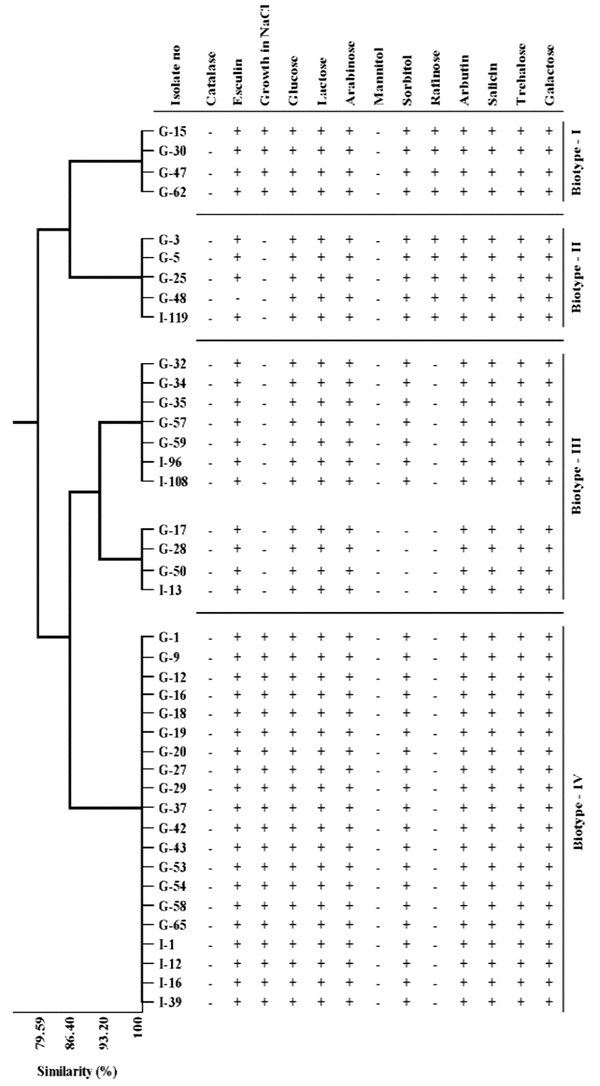 All the E. faecalis strains examined by the disk diffusion method were susceptible to imipenem and penicillin G while no vancomycin-resistant isolate was determined. Of them, 95% were found to be resistant to clindamycin and 77.5% to tetracycline and SXT. Of the studied E. faecium types, 95% were found to be susceptible to vancomycin and 67.5% to penicillin G (Table 3, Figures 4 and 5).

Manero and Blanch (25) applied 94 different biochemical tests with referenced Enterococcus cultures and 82 clinical isolates, and 76 of these tests could be used to identify Enterococcus species and 12 of them (D-raffinose, L-arabinose, sorbose, ribose, methyl-α-D-glucopyranoside, mannitol, arginine, sucrose, pyrrolidinyl aminopeptidase, α-galactose, yellow pigment production, and alkaline phosphate) could be used safely for the identification of Enterococcus strains based on species.

The antibiotic resistance mechanisms in enterococci can be explained in two ways. Intrinsic resistance is inherently encoded in chromosomes in most or all types of enterococci. The observed structural resistance mechanisms for some antibiotics are typically specific to some types of Enterococcus species. Acquired resistance is more variable than intrinsic resistance. Enterococci are able to develop resistance to many antibiotics by means of plasmids or transposons, by this way, tetracyclines have become resistant to macrolides, lincosamides, and chloramphenicol. They show a high level of aminoglycoside resistance with a large number of different aminoglycosides by modifying enzymes. In addition to all these, the resulting plasmid- based beta-lactam resistance is another problem (1, 5, 28, 33).

In this study, 32.5% of the examined E. faecium strains were resistant to penicillin, 27.5% to erythromycin, 15% to gentamicin, 17.5% to tetracycline, 7.5% to rifampicin, 27.5% to imipenem, 5% to vancomycin, 20% to ciprofloxacin, 37.5% to clindamycin, and 17.5% to SXT. As observed in the studies, enterococci have gradually increased resistance to beta-lactam antibiotics as a result of unconscious and long-term irregular use. Besides, E. faecium strains were found to have a low resistance to tetracycline, while E. faecalis strains were found to be highly resistant. On the other hand, the rates of resistance to imipenem, ciprofloxacin, gentamicin, clindamycin, and trimethoprim/sulfamethoxazole were lower than the rates in isolates from other regions. The high efficacy of these agents shows that it is still possible to use them in this region.

Based on this study, the isolation rates of E. faecalis and E. faecium strains were found to be lower in Van located in eastern Turkey than in other regions. Due to the phenotypic changes in Enterococcus species, the identification reliability of epidemiological studies by PCR-based techniques was found to be relatively high. The biochemical identification of enterococci did not give reliable results, and the rate of false negativity was significant. Because of the diversity of field strains, knowing the biotype profiles could contribute significantly to the reduction of the false identification rate. Resistance rates of E. faecium and E. faecalis to antimicrobial agents were updated in the region.