Epidemiology of Acute Rotavirus Diarrhea Among Hospitalized Children Under Five Years of Age in Hefei, China, During 2015 - 2018 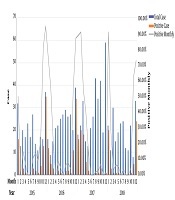 Rotavirus infection is still the leading cause of acute viral gastroenteritis in children under five years of age worldwide. It is also a serious public health concern in China.

A total of 1,095 cases with acute viral gastroenteritis requiring hospital admission from January 2015 to December 2018 were analyzed. Among them, 276 cases were positive for rotavirus A infection, accounting for 25.21% of the total number of children suffering from acute diarrhea. The detection rate of rotavirus A was the highest in children aged 1 - 2 years. The peak month for rotavirus infection during 2015 - 2018 was December and January. The hospitalized children with rotavirus infection showed dehydration, electrolyte disorder, liver function abnormality, and myocardial enzyme abnormality.

Rotavirus is still the first pathogen of acute viral diarrhea in children in Hefei, especially children < 2 years of age, which highlights the need for widespread rotavirus immunization in young children.

The diarrheal disease remains a substantial public health concern in children under five years of age in both developed and developing countries, particularly developing countries. Among the various enteric pathogens, rotavirus appears to be the most important etiological agent of severe pediatric diarrhea worldwide. Rotaviruses are double-stranded RNA viruses belonging to the Reoviridae family. Rotaviruses include seven types described as A to G according to their different antigens. Of these types, group A accounts for the vast majority of rotavirus infections worldwide. In China, group A rotavirus (RVA) infections were responsible for approximately 47.8% of diarrhea hospitalizations among children (1) and 53,559 childhood deaths from rotavirus during 2003 - 2012 (2). The structural proteins of RVA have been cloned, of which type G is defined by glycoprotein VP7 and type P defined by the protease-sensitive protein VP4. Different G- and P-subtypes have been reported in different areas of China; however, G-genotypes G1-3 and P-subtypes P [8] and P [4] were the most common types. Moreover, G9P4 is on the rise and has become the dominant type of group A rotavirus in many provinces of China.

There is no current specific treatment for rotavirus infections. Therefore, RV vaccination is an effective way to prevent infection. The Lanzhou Lamb Rotavirus (LLR) vaccine was licensed in China in 2000, and it was the only vaccine available in the private market before 2018 (2). However, rotavirus vaccination has not been introduced to the National Immunization Program in our country. The percentage of LLR vaccinated children was only 25.3% among those aged 2 - 59 months in Guangzhou, China, in 2013 (3). A survey from the Children’s Immunization Information System in 2014 showed that 32.8% of children aged < 36 months from six provinces in China had received at least one dose of LLR vaccine (4). The proportion of rotavirus vaccination in China was much lower than rotavirus vaccine coverage (78%) in the United States.

As the capital city of Anhui Province, Hefei not only is an important central city in eastern China but also serves a strategic point of entry under the “one belt and one road” of the Yangtze River economic belt. A prospective surveillance study of viral diarrhea among children under five years of age in a sentinel hospital of Anhui Province (2010 - 2015) showed that rotavirus A infections were the most common infections (26.71%) among children with acute gastroenteritis (5), which had declined compared to the infection rate (39.98%) during 2008 - 2009 (6). However, only about 5% of them had received the LLR vaccine (7), which was much lower than vaccine coverage in many other cities of China. Now, after five years, the epidemiology of viral gastroenteritis may have changed gradually in China.

Rotavirus infections are still the main cause of diarrhea hospitalization among children under five-years-old. The coverage rate of rotavirus vaccination is very low in Anhui Province. This study aimed to obtain information about rotavirus diarrhea among hospitalized children in Hefei City of Anhui Province, China, in recent years, which can provide reliable data on vaccination in this area.

We enrolled 1,095 patients (aged two months to five years) who were diagnosed with acute gastroenteritis and admitted to our hospital department between January 2015 and December 2018. Among these patients, 118 patients had received RV vaccination. Acute gastroenteritis was defined as the symptoms of diarrhea (loose or watery stool more than three times per day) and/or vomiting within one week. Medical records, including demographic, clinical, laboratory, and microbiological data, were reviewed. All cases were listed under verbal permission from medical directors of health facilities. Detailed clinical information on the onset of diarrhea, vomiting, fever, dehydration, convulsions, and changes in consciousness was collected. The selection criteria of rotavirus diarrhea included (I) patients under the age of five years, (II) three or more loose, liquid, or watery stool or bloody and mucous, loose stool in a 24-h period commencing < 14 days before enrollment, and (III) laboratory-confirmed rotavirus A in the stool sample.

Excel 2013 was used to collect data. SPSS 19.0 software was used for statistical processing and chart drawing. The categorical variables of demographic data are summarized as frequencies and proportions. P values of < 0.05 were considered statistically significant.

From 2015 to 2018, we found that the months of December and January had the highest monthly rotavirus detection rate, as shown in Figure 1. The highest monthly rotavirus detection rate was in January, which has been on the rise in recent years. The percentage rate for positive rotavirus cases was 90.91% in January 2018. The positive rate in rotavirus infection was the lowest in June during 2015 - 2018. The seasonal variation for the positive rate of rotavirus infection was significant, mainly in December and January (Figure 1), and there was a significant difference between the years 2015 - 2018 (P < 0.01).

Figure 1. Monthly distribution of the number and rate of rotavirus positive cases among hospitalized children under five years old with diarrhea in Hefei, China, in 2015 - 2018

Rotavirus diarrhea has been considered as an important cause of hospitalization and death in children under five years of age, particularly in developing countries. Rotavirus A and its G1-3 type are the main causes of acute viral gastroenteritis in children under five years of age in Anhui Province, China (8, 9). In our study, we identified 276 cases who were positive for rotavirus A infection, accounting for 25.21% of the total number (n = 1095) of hospitalized children with acute diarrhea during 2015 - 2018, which was similar to previous reports (10, 11). The years between 2015 to 2017 showed a significant decline in children hospitalized for rotavirus infection in this study, which may be related to the upsurge use of LLR vaccination (about 10% of vaccine coverage). However, this RVA prevalence was higher than those in developed countries where the RVA vaccine has been introduced into their childhood national routine immunization programs (12). In Japan, the detection rates of RVA in 2017 and 2018 were 17.9% and 13%, respectively (13).

Therefore, these data suggest that effective rotavirus vaccines have the potential to reduce morbidity and mortality due to rotavirus infection. In this study, we observed that the detection rate of rotavirus A was the highest in children aged 1 - 2 years, with 109 out of 185 cases being positive for rotavirus A infection, giving a detection rate of 58.92%. This is because of the gradual loss of maternal antibodies among children in this age group. With the establishment and enhancement of acquired immunity, the proportion of rotavirus diarrhea in children aged 2 - 5 years has gradually decreased. The results of this study showed that the detection rates of rotavirus diarrhea were 54.46% and 58.92% in the seven-month to one-year age group and one to two-year age group, respectively, which is consistent with most research results (10, 11).

Previous studies have found that the incidence of rotavirus diarrhea was high in winter (14). This study found that the peak month for rotavirus infection in 2015, 2016, and 2018 was December, with monthly detection rates of 94.59%, 87.18%, and 72.73%, respectively. Furthermore, January was also a peak month for rotavirus infection, with monthly detection rates of rotavirus infections for January 2015 to 2018 50%, 75%, 88.89%, and 90.91%, respectively. In addition, the environmental survival status of rotavirus is closely related to temperature and humidity. As a southern region in the central part of China, Hefei’s atmosphere and environment are similar during spring and winter, with very slight differences between temperature and humidity, which objectively provide a relatively suitable environment for the reproduction and transmission of rotavirus infections. These hospitalized children presented with vomiting, fever, severe dehydration, and convulsion. Laboratory examinations showed that most of these children exhibited further complications such as acidosis, myocardial enzyme abnormality, and liver function abnormality. The research found that clinic severity was associated with the genotype of the virus in hospitalized children with rotavirus gastroenteritis (15). However, the recent genotype of rotavirus strains has not been fully elucidated in this area, which is one limitation of our study.

Our study demonstrated that rotavirus was the most common pathogen found to cause acute diarrhea among children under five years of age in Hefei. Understanding the local distribution of rotavirus can provide reliable data on vaccination. Targeted research of rotavirus strains is vital for the development of vaccines for China.