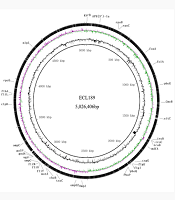 Carbapenem-resistant Enterobacteriaceae (CRE) has become a public health threat due to resistance to multiple antibiotics. The production of β-lactamase is the most important resistance mechanism of Enterobacteriaceae. Although isolates producing KPC-2 or NDM-1 enzymes have been reported widely, isolates co-producing KPC-2, NDM-1, TEM-1, TEM-95, SHV-66, and other β-lactamases have rarely been detected in the same strain, especially in Enterobacter cloacae.

In this study, we identified and sequenced the genome of carbapenem-resistant E. cloacae ECL189 to in-depth analyze the resistance and transmission mechanisms of E. cloacae.

We investigated the antimicrobial susceptibility of ECL189 by a VITEK 2 system, E-test gradient strips, and K-B method. Whole-genome sequencing was used by the PacBio RS II platform and Illumina HiSeq 4000 platform. Antimicrobial resistance genes, virulence genes, non-coding RNA, and repeat sequences were predicted by biological information databases. A PCR was used to further confirm that the blaKPC-2, blaNDM-1, blaTEM-1, blaTEM-95, and blaSHV-66 genes existed in ECL189. A conjugation experiment was performed to determine the transferability of resistance. Molecular typing of ECL189 was done by multilocus sequence typing (MLST).

Enterobacter cloacae ECL189 was resistant to 21 out of 23 tested antibiotics, but its transconjugant was resistant to 10 out of 18 tested antibiotics. The genome of ECL189 consisted of a 5,026,406 bp chromosome and four circular plasmids. In total, 26 resistance genes and 58 resistance proteins were identified. In addition, 77 determinants associated with bacterial virulence were identified. A large number of resistance and virulence genes were located in the plasmids. The results of whole-genome sequencing were consistent with the β-lactamase genes. The MLST analysis revealed that this strain belonged to ST74.

This study further revealed the resistance, virulence, and transmission mechanisms of carbapenem-resistant E. cloacae. Resistance and virulence genes spread in bacteria by the horizontal transfer of plasmids, which should attract more attention in relevant departments.

Carbapenem-resistant Enterobacteriaceae (CRE), which are resistant to most β-lactam antibiotics, has become a major challenge for clinical treatment. CRE have been listed as an emergency threat worldwide by the World Health Organization because of high morbidity and mortality (1, 2). The main enzyme types of CRE were Klebsiella pneumoniae carbapenemase 2 (KPC-2) and New Delhi metallo-beta-lactamases 1 (NDM-1), discovered in 2003 and 2009, respectively (3, 4). The genes encoding the two enzymes are often located on plasmids and “shuttle” between different or homologous bacteria, resulting in rapid dissemination of resistance. Simultaneously, this is the main reason for clinical infection treatment failure and difficult infection control. As the first TEM allele identified, TEM-1 was isolated from penicillin-resistant bacteria in 1963 (5). Besides, TEM-95 is a variant of TEM-1. They confer resistance to penicillins and early cephalosporins. Also, SHV-66 is a kind of extended-spectrum β-lactamase (ESBLs).

The isolates producing KPC-2 or NDM-1 enzymes have been reported widely, but co-producing KPC-2, NDM-1, TEM-1, TEM-95, SHV-66, and other β-lactamases has rarely been detected in the same strain, especially in Enterobacter cloacae. The co-production of various β-lactamases including two major carbapenemases in a single strain may be significant, as it may confer higher-level resistance to antibiotics and make the resistance mechanism more complicated. In this study, we investigated the genetic features of an E. cloacae isolate, potential transmissibility of resistant plasmids, and antibiotic resistance mechanisms.

In this study, we employed a high-throughput sequencing assay to characterize the genomes of carbapenem-resistant E. cloacae, aiming to analyze the resistance and transmission mechanisms of the isolate and provide a theoretical basis for the treatment and control of clinical infections.

An E. cloacae isolate (ECL189) was collected from the urine specimen of an 87-year-old female patient who had severe craniocerebral trauma and received multidrug therapy over a long period. The isolate was identified by a VITEK 2 automated identification system (bioMerieux, France).

Antimicrobial susceptibilities of ECL189 and transconjugants were initially tested by the VITEK 2 system (bioMerieux, France), as previously reported (6). The MICs for imipenem, meropenem, and ertapenem were checked by the E-test (bioMerieux, France), and the interpretation of results was done based on CLSI standards (7). The antibiotic susceptibility to cefotaxime, ampicillin/sulbactam, piperacillin/tazobactam, cefoperazone/sulbactam, and fosfomycin was tested by the Kirby-Bauer (KB) method. Escherichia coli ATCC 25922 was used as a quality control strain.

The strain was cultured overnight on M-H agar plates at 37°C, and the DNA was extracted by the boiling method (8). Then, blaKPC, blaNDM, blaSHV, and blaTEM were, in sequence, amplified using the primers and systems previously described (9). The KPC-2-producing strain was verified by sequencing as a positive control and the sensitive strain as a negative control. The PCR amplification products were analyzed using electrophoresis on a 2% agar gel and finally observed by a gel imaging system.

The transferability of resistance was confirmed by the conjugation test. Escherichia coli 600 (EC600, rifampicin-resistant) was the recipient bacterium, and ECL189 was the donor bacterium. The donor and recipient bacteria were mixed at a 2: 1 ratio and cultured in M-H broth at 37 °C. Transconjugants were screened on M-H agar plates containing rifampicin (256 mg/L) and imipenem (1 mg/L). Finally, blaNDM-1 and blaKPC-2 of transconjugants were amplified according to previous studies (9).

The ECL189 isolate genome was sequenced using a PacBio RS II platform and Illumina HiSeq 4000 platform at the Beijing Genomics Institute. The GATK (11) and SOAP tool packages (SOAP2, SOAPsnp, SOAPindel) were used to assemble the sequences. The plasmid sequences were assembled using SOAP to the bacterial plasmid database (12).

We tested the susceptibility of E. cloacae strain ECL189 with three methods, including VITEK 2 compact system, E-test, and K-B method. Our findings revealed that ECL189 was resistant to 21 out of 23 tested antibiotics, including cephalosporins (cefepime) and carbapenems (ertapenem, imipenem, and meropenem), and remained susceptible to gentamicin and nitrofurantoin. The results are shown in Table 1. Transconjugant was resistant to 10 out of 18 tested antibiotics, including ceftriaxone, imipenem, meropenem, ertapenem, cefazolin, ceftazidime, cefepime, amoxicillin/clavulanate, piperacillin, and ampicillin but susceptible to aztreonam, tetracycline, nitrofurantoin, trimethoprim/sulfamethoxazole, ciprofloxacin, levofloxacin, gentamicin, and amikacin. The PCR results showed that the blaNDM-1 gene was positive, but blaKPC-2 was negative. The MLST data showed that the ECL189 isolate belonged to ST74.

a The table showed a nucleotide identity above 90% of resistance genes.

b MIC was performed by VITEK 2 system.

c MIC was performed by E-test.

The genomic features and comparison of ECL189 are summarized in Figure 1. The chromosome was assembled into one contig, and plasmids were assembled into a circular ring. It was determined that the genome of ECL189 consisted of a 5,026,406 bp chromosome with an average 55.35% GC content and four plasmids. We also found many different kinds of resistance genes (Table 1). The gene annotation contained 63 resistance proteins, 87 copies of tRNA fragments, 55 copies of snRNA, nine copies of 5s rRNA, eight copies of 16s rRNA, eight copies of 23s rRNA, 81 RF (tandem repeat, total 15,521 bp), 58 minisatellite DNA (total 5,798 bp), and five microsatellite DNA (total 181 bp). Besides, 65.9%, 69.91%, 77.8%, 2.5%, 98.37%, 67.75%, and 86.84% of the genes were distributed in GO, SWISSPROT, COG, CARD, NR, KEGG, and IPR databases. In addition, 77 determinants associated with bacterial virulence were identified. Further PCR analysis showed that blaKPC-2, blaNDM-1, blaTEM-1, blaTEM-95, and blaSHV-66 were positive, consistent with the whole-genome sequence. 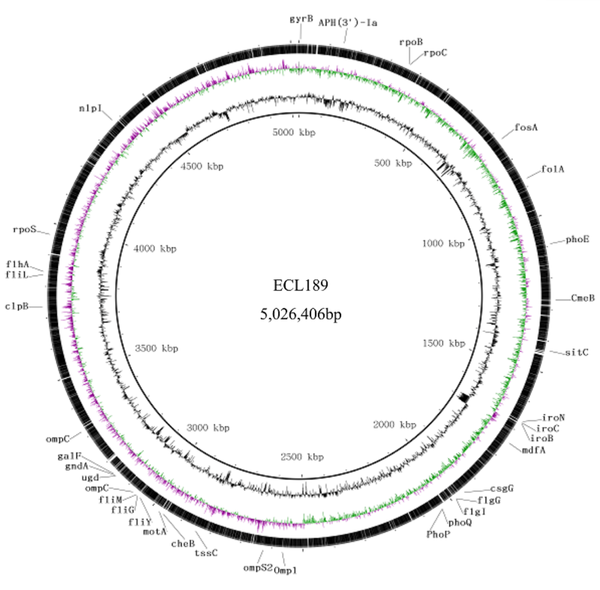 The C + C contents of them were 50.35% and 51.89%, respectively. The blaNDM-1-bearing plasmid, pECL189-4, was 41,439 bp with an average of 50.81% GC content (Figure 2D). It contained lots of conjugal transfer protein-coding sequences, such as traJ, traG, traF, traO, and traA. A blast search against the nr/nt database indicated that pECL189-1 showed a nucleotide identity (99%) and low query coverage (57%) similar to pCRE3-KPC (GenBank no.MH9193878.1). Besides, pECL189-2 and pECL189-3 were similar to several plasmids that have been reported in E. cloacae. Also, pECL189-4 was highly similar to the plasmids previously reported in Thailand and Taiwan. The blast results are shown in Table 2. 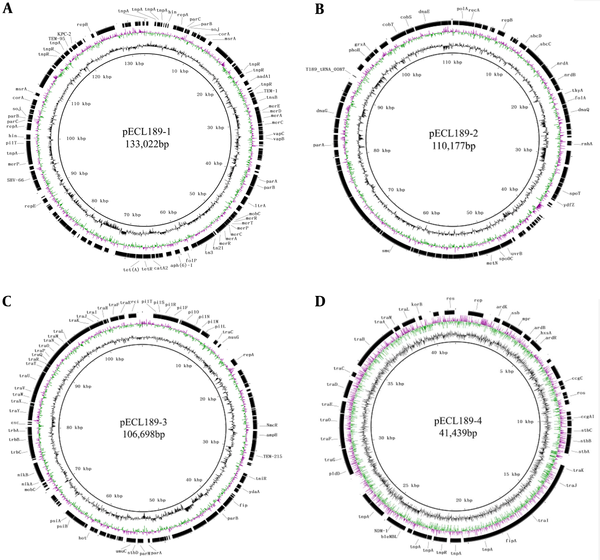 The emergence of multidrug-resistant Enterobacteriaceae has become a clinical problem due to the production of carbapenemases and other β-lactamases. These β-lactamase enzymes are encoded by resistance genes. In this study, we reported the complete genome sequences of E. cloacae ECL189 with co-existing genes blaKPC-2, blaNDM-1, blaTEM-1, blaSHV-66, and other resistance genes. The results of antimicrobial susceptibility testing showed that ECL189 was resistant to penicillins, cephalosporins, carbapenems, monocyclic amides, aminoglycosides, and fluoroquinolones, and its conjugant was resistant to penicillins, cephalosporins, and carbapenems, but sensitive to monocyclic amides, aminoglycosides, and fluoroquinolones. Therefore, we speculated that pECL189-4 was a conjugative plasmid because it just carried the carbapenem resistance genes without aminoglycoside resistance genes. In addition, ECL189 carried the sul2 and FosA2 genes, which mediated resistance to folic acid pathway inhibitor trimethoprim/sulfamethoxazole and fosfomycin. Since ECL189 did not carry the nitrofuran-resistant genes, it was susceptible to nitrofurantoin. Strangely, ECL189 carried an aminoglycoside resistance gene (APH (3’)-Ia), but it was susceptible to gentamicin. We suspect it may be related to bacterial evolution.

Antibiotic resistance traits can spread among the same or different species of bacteria (15) via mobile genetics elements, such as plasmids (16), insertion sequences (17), integrons, and transposons (18). A plasmid is a kind of extrachromosomal circular DNA molecule with the ability to autonomously replicate. In this study, we identified four plasmids pECL189-1, pECL189-2, pECL189-3, and pECL189-4. Besides, pECL189-2 and pECL189-3 harbored fewer resistance genes. Moreover, pECL189-1 harbored genes such as KPC-2, TEM-95, TEM-1, aadA1, APH (6’)-Id. and SHV-66. Also, pECL189-1 acquired mobile genetic elements such as transposons (tn21, tn3) and most resistance genes were close to transposons. In addition, pECL189-4 harbored the blaNDM-1 gene and also carried tons of transfer protein genes. Combined with the result of antimicrobial susceptibility testing, we speculated that pECL189-4 was a conjugative plasmid. It could transfer from one bacterium to another by conjugation (19), playing a very important role in the spread of carbapenem resistance among bacteria. A blast search against the nr/nt database indicated that pECL189-4 showed an overall nucleotide identity (99.98 - 100%) and query coverage (94 - 99%) similar to several plasmids, such as pCRE1.4 (GenBank no. CP034398.1), pNH25.5 (GenBank no. CP024879.1), pTR3 (GenBank no. JQ349086.2), and pEcloNH77 (GenBank no. CP040826.1) that have been reported in different Enterobacteriaceae and two regions, i.e., Thailand and Taiwan, suggesting that the origin of the NDM-1 gene in Kunming may be closely related to Thailand and Taiwan.