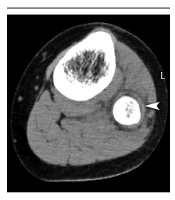 Acute hematogenous osteomyelitis (AHO) usually occurs in the first two decades of life. Evidence shows that 50% of patients with AHO are younger than five years. This infection typically affects the metaphyseal region of long tubular bones, whereas the fibula is rarely involved. Staphylococcus aureus is the causative agent of AHO in the majority of cases, while Escherichia coli is isolated rather uncommonly beyond the neonatal period.

Herein, we describe the case of an adolescent girl who was treated medically and surgically for AHO with an unusual location in the proximal fibula, caused by E. coli. The source of the causative agent remained unknown after the patient had been evaluated for possible urinary tract infection and underlying immune system defect.

The fibula is a rare anatomic location for AHO, and such cases may pose a diagnostic challenge. Lack of response to empiric antibiotic treatment in patients with AHO may indicate the involvement of an uncommon pathogen, which is not susceptible to standard empiric antimicrobials aimed to target S. aureus as the most likely pathogen. In such instances, prompt surgical intervention can help determine the causative pathogen and optimize antimicrobial treatment.

Osteomyelitis is an inflammation of the medullary bone, which is commonly caused by pyogenic bacteria. It has heterogeneous pathophysiology and is one of the most challenging infections in terms of treatment. The causative microorganisms can be introduced into the bone through either hematogenous delivery or direct inoculation of the bone from trauma, surgery, or a contiguous focus of infection (1). Osteomyelitis often occurs in the first two decades of life, and 50% of patients are younger than five years (1, 2). In children, bone infection commonly develops in the form of acute hematogenous osteomyelitis (AHO), caused by symptomatic or asymptomatic bacteremia in otherwise healthy individuals (3, 4).

A history of upper airway infection and trauma may be considered a risk factor for AHO. In previous studies, a history of trauma was reported in nearly 30% of these patients (2, 5, 6). The causative agents of AHO differ with respect to the patient’s age (1, 3). In most case series, Staphylococcus aureus accounts for almost 70 - 80% of AHO cases (1). On the other hand, AHO, caused by Escherichia coli and other enteric aerobic Gram-negative organisms, is less common and is generally seen in neonates and young infants (1, 7).

In children aged 1 - 16 years, AHO mostly affects the metaphyseal region of the long tubular bones due to the slow blood flow through venous sinusoids and underdeveloped collateral circulation (5). The lower extremity is slightly more involved than the upper extremity. Approximately two-thirds of all AHO cases involve the femur (25%), tibia (24%), and humerus (13%) (1, 8). The fibula is affected in only 4% to 10% of patients, with an often misleading clinical presentation (2, 7, 9, 10). Herein, we present the case of an adolescent girl who was treated for AHO in an uncommon site (proximal fibula), caused by an unusual microorganism (E. coli) for the patient’s age from an unknown source.

The patient was a 13-year-old girl with a four-day history of persistent fever (up to 40°C), accompanied by tenderness and swelling over the lateral aspect of the left fibula lasting for one day. She showed somewhat reduced weight-bearing. She also had a dubious history of minor blunt trauma to the left knee several days before the onset of symptoms. Several days before admission to the hospital, she had received treatment for presumed viral upper respiratory tract infection with ibuprofen and paracetamol. The laboratory tests upon admission showed a normal white blood cell count (6.8 × 109/L) and a high level of C-reactive protein (CRP = 101.7 mg/L).

The erythrocyte sedimentation rate (ESR) was 90 mm/h. The urinalysis revealed the presence of pyuria (i.e., 30 - 35 white blood cells per high-power field), a low erythrocyte count, and a high bacterial cell count. The urine also had a cloudy appearance. The urinary nitrites were negative, and the urine culture showed no growth. Blood culture was taken upon admission (before antibiotic therapy), yielding a negative result. Also, an X-ray of the affected leg appeared normal. However, computed tomography (CT) scan showed a subperiosteal abscess of the proximal fibula (Figure 1), establishing the diagnosis of AHO. 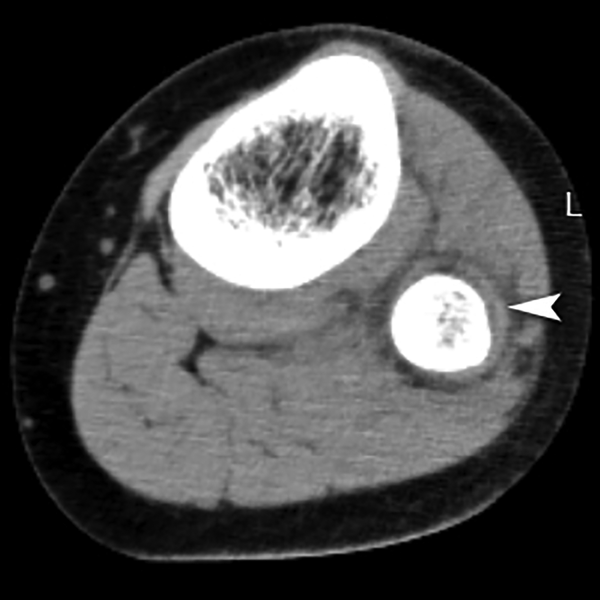 The patient had no significant medical history, except for skin susceptibility to eczema, which was often complicated by a staphylococcal infection. She had also experienced lichenification of the genital area with a tendency to form rhagades. Upon admission, empiric antimicrobial therapy with cloxacillin (100 mg/kg/day) and gentamicin (4 mg/kg/day) was initiated. However, after two days, no signs of clinical improvement were observed. She was still feverish, and her general condition was deteriorating. Also, the laboratory parameters were not improving, with the CRP level increasing to 166.8 mg/L.

On the third day of her hospital stay, we decided to perform subperiosteal fenestration, cortical drilling with curretage of the medullary bone, and extensive open irrigation with drainage. Next, the abscess content, collected from the bone medulla, was sent for microbiological examination. The wound was closed after it was completely washed, and the negative suction drain was left in situ for two days. A wild-type E. coli strain grew in the microbiological culture, which was susceptible to all tested antimicrobials, including beta-lactams, aminoglycosides, and fluoroquinolones. The patient received intravenous ceftriaxone (1 g every 12 hours) for three weeks, followed by oral ciprofloxacin (500 mg every 12 hours) for an additional three weeks. She showed rapid clinical improvement with normalization of CRP (3.3 mg/L) on the 13th postoperative day.

During the patient’s hospital stay, an attempt was made to identify the source of E. coli strain. Accordingly, a kidney ultrasound was performed, which indicated no abnormalities. Additionally, a vulval swab was taken for culture, but no bacterial growth was observed. Further investigations, including voiding cystourethrography, uroflowmetry, and static renal scintigraphy, were recommended six months after surgery to rule out functional and structural abnormalities of the urinary tract; however, further diagnostic tests were not carried out at parents’ discretion. Basic immunological studies, including the measurement of complement proteins (C3 and C4), antinuclear antibodies, and anti-double-stranded DNA antibodies, were carried out to screen for a possible immune system defect; however, the results were within the reference ranges. In the one-year follow-up visit, the patient reported no recurrence of the symptoms. Her weight-bearing, as well as blood test and X-ray results, were reported to be normal.

Acute hematogenous osteomyelitis of the fibula is a rare condition in the pediatric population. The distal metaphysis of the fibula is affected more often than the proximal fibula in these patients (11). Staphylococcus aureus is by far the most frequent causative agent of AHO, whereas Gram-negative rods, such as E. coli, are considerably less frequent, except in neonates (1, 7, 11, 12). After a thorough literature search, we could not find any reports of AHO in the fibula due to E. coli in children beyond the neonatal period. Although studies describing the series of patients with AHO agree that both E. coli isolation and fibular involvement are rare in pediatric AHO, it is impossible to determine whether any cases of fibular osteomyelitis are caused by E. coli strains (7, 11, 13). The standard treatment for AHO comprises parenteral administration of antibiotics, followed by oral therapy for three to four weeks (2). Appropriate antibiotic therapy alone, without surgical interventions, may be sufficient for 90% of AHO cases (8). Surgical management is warranted if there is no response to intravenous antibiotic therapy, the symptoms persist, and periosteal abscess or another deep soft tissue abscess develops (8). Lack of response to empiric therapy may indicate the involvement of an unusual pathogen, similar to our patient.

Extraintestinal infections due to E. coli commonly include urinary tract infections, neonatal meningitis, sepsis, pneumonia, osteomyelitis, and surgical site infections (14, 15). The culprit E. coli strains are usually extraintestinal pathogenic E. coli (ExPEC), which are epidemiologically and phylogenetically different from both commensal and intestinal pathogenic strains (14, 15). The ExPEC strains are part of the intestinal microbiota and may asymptomatically colonize the vagina or oropharynx. They can also cause infection upon entering a normally sterile body site (15-17). The ExPEC strains typically possess multifarious virulence factors, which enable them to overpower the host defense mechanisms in both healthy and immunocompromised individuals at all ages; nevertheless, the incidence of the infection increases with the patient’s age (14-16). In older adults, osteomyelitis usually results from the hematogenous spread of bacteria from the urinary system, seeding the vertebrae or pelvis (18, 19). In children with AHO, E. coli is an unusual pathogen and accounts for only 0.6% to 3% of cases, typically affecting the long tubular bones (11, 13).

Commonly, the source of bacteremia leading to acute osteomyelitis is unknown. Therefore, colonization of bacteria in the mucous membranes of the respiratory tract or the skin is the most likely pathway of entry (20). In our patient, the origin of bacteremia remained unknown, as there was no obvious source of infection. However, considering her medical history, E. coli might have reached the bloodstream through a breach in the integrity of the mucosal barrier in the genitourinary system or the skin of the genital area. We could neither confirm nor exclude a previous urinary tract infection or vulvar colonization. The possible role of the patient’s history of trauma in facilitating the spread of infection into the bone should also be considered.

In conclusion, AHO caused by E. coli is a rare clinical condition in pediatric patients beyond the neonatal period. An even more unusual finding is AHO in the proximal fibula, which requires careful diagnostic measures and assessments. The lack of response to empiric antibiotic treatment in patients with AHO may indicate the involvement of an unusual pathogen, which is not susceptible to standard antimicrobials for S. aureus. In such cases, prompt surgical intervention is suggested, which can help determine the causative pathogen and optimize the antimicrobial treatment.