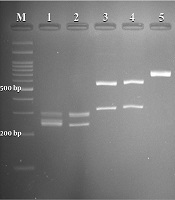 Vulvovaginal candidiasis (VVC) is a significant health issue due to Candida spp. Although Candida albicans is considered a major causative agent of vaginal candidiasis, non-albicans species have increased during previous decades.

Vaginitis is a common problem in gynecological diseases (1). About 90% of vaginal infections are caused by Candida species, Trichomonas, and bacteria. After bacterial vaginosis, the second most prevalent cause of vaginal infection is Candida vaginitis, in which about 75% of healthy female adults are infected at least once throughout their reproductive life (2). Predisposing factors of the vulvovaginal candidiasis (VVC) consist of pregnancy, uncontrolled diabetes mellitus, antimicrobial therapy, the use of anti-estrogen pills, contraceptives, the use of corticosteroids, organ transplantation, cancer chemotherapy, tight clothing, higher sexual activity, and vaginal douching (3, 4). Generally, Candida albicans (85% - 95%) is the popular causative agent of VVC across the world (5-7). Other species that cause infections, including C. tropicalis, C. glabrata, C. krusei, C. parapsilosis, C. kefyr, and C. lusitaniae, have also been announced (8, 9).

For a long time, phenotypic methods, have made the backbone of Candida spp taxonomy and identification (10). Owing to the reliance of such methods on the variable expression of phenotypic features, morphological methods may often be indistinct and insufficient for differentiation and, therefore, not reliable for species identification, uncommon and new species in particular (10). Furthermore, identification of Candida strains that cause VVC is vital to determine the susceptibility to antifungal drugs in the clinical form of recurrent VVC (11). In order to identify these fungi accurately, the focus has shifted toward molecular strategies, which are more precise and less susceptible to variations because of development conditions as well as phenotypic switching.

Several studies confirm polymerase chain reaction-restriction fragment length polymorphism (PCR-RFLP) assays as simple, inexpensive, rapid, and highly valuable instruments to be applied to discriminate among Candida species (10, 11). The lack of definitive diagnosis by the physicians and excessive administration of antifungal drugs increase the drug-resistant strains (12). Occasionally, the Candida vaginitis relapses due to the long-term administration of common antifungal medications (13). Therefore, it seems essential to know about the drug resistance pattern of Candida species isolated from VVC for appropriate treatment (14).

Given the reduction and the possible differences in drug susceptibility in Candida isolates from patients with VVC, the current research aims to identify Candida species and investigate in vitro activities of voriconazole (VRC), fluconazole (FLU), nystatin (NYS), caspofungin (CAS), clotrimazole (CLO), itraconazole (ITC), ketoconazole (KTO), and amphotericin B (AMB) against Candida strains ( isolated from VVC patients).

This descriptive research was performed one year (2018 - 2019) on vaginal specimens of patients suspected of VVC referring to gynecology clinics and (obstetrics) private midwifery in Jahrom, a city in the South of Iran. The specimens were collected by sterile cotton swabs from the posterior vaginal and cultured on Sabouraud dextrose agar (SDA, Merck, Germany) plates, accompanied by 50 mg/L chloramphenicol, and incubated for 48 - 72 hours at 35°C. All yeasts were plated on the CHROMagar Candida medium, (CHROMagarTM, RambachTM, AquaCHROMTM) for 48 h at 37°C.

Spectrophotometrically, adjusting homogeneous suspensions was done at the wavelength of 530 nm to optical densities of 75% - 77% transmission. The final inocula suspension was adjusted to 0.5 - 2.5 × 103 conidia/mL in RPMI-1640 with L-glutamine, and no sodium bicarbonate (Sigma-Aldrich, USA) buffered to pH = 7.0 with 0.165 M morpholinepropanesulfonic acid (MOPS, Sigma-Aldrich, USA). The incubation of the microdilution plates was done (24 and 48 h/35°C). Minimum inhibitory concentration (MIC) values were determined visually by comparing the growth in the wells containing the drug with that of the drug-free control. The C. parapsilosis ATCC 22019 strains were applied as quality control for new series of MIC plates. The geometric mean (GM) MICs, MIC ranges, MIC50, and MIC90 (minimum inhibitory concentration required to inhibit the growth of 50% and 90%of organisms, respectively) were calculated. The experiments were carried out in duplicate.

The differences between the mean values were evaluated statistically using a student t-test using SPSS (version 17.0). Statistical significance was set at 0.05.

4.1. Demographic Information and Identifying the Species

A total of 295 females suspected of vulvovaginal candidiasis were examined. The patients’ average age and age ranges were 31 and 18 - 57 years, respectively. The most common predisposing factors, including previous VVC, antibiotic therapy, diabetes, blood pressure, contraceptive use, and antifungal therapy, were observed in (57%), (11%), (4%), (4%), (3%), and (1%) patients, respectively. The culture results were positive in 50.5% (149 of 295) of specimens. According to classical and molecular identification techniques, C. albicans was the major species 133/149 (89.2%), followed by C. glabrata 8/149 (5.4%) and C. kefyr 2/149 (1.4%). A mixed infection of C. albicans and C. glabrata was detected in 6/149 (4 %) specimens. Figure 1 illustrates the PCR-RFLP pattern for identifying some study isolates representative of three species of Candida. 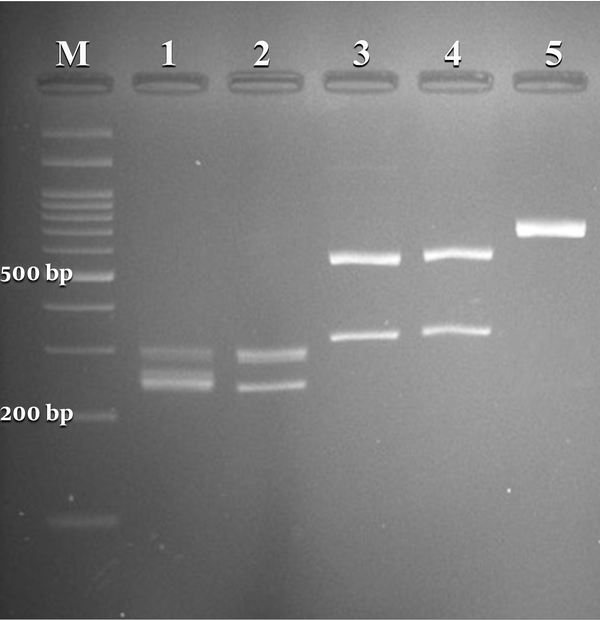 Vulvovaginal candidiasis is a common fungal infection in female adults throughout the child-bearing period (21). The VVC frequency ranged from 5.4% to 84% in reported studies worldwide (16,22, 23). In this research, the overall prevalence of Candida vaginitis showed a rate of 50.5%, which is similar to several studies conducted by researchers previously (13, 20, 24), but it is in contrast to Fornari et al. (30.07%) (25), Hedayati et al. (28.2%) (22), and Alfouzan et al. (13.2%) (26). Additionally, the present research showed the highest rate of VVC in 30 to 40 years old group, consistent with the study conducted by Gharaghani et al. (20) and inconsistent with Rezaei-Matekolaei et al. (27). The results of the present work about predisposing factors revealed that previous VVC (57%), antibiotic treatment (11%), diabetes (4%), blood pressure (4%), contraceptive use (4%), and antifungal treatment (1%) were linked with VVC as described before (28-30).

The present work revealed a high frequency of C. albicans (89.2%) in VVC patients. This result was in line with the several previously conducted researches, including Roudbary et al. (87.2%) (23), Roshan et al. (86.2%) (31), Rezaei-Matehkolaei et al. (88.2%) (27), Gharaghani et al. (86.8%) (20), and Fornari et al. (82.5%) (25). Although C. albicans is considered a vaginal microflora and the major causative agent of vaginal candidiasis, non-albicans species have increased during previous decades (32, 33). Candida glabrata, C. tropicalis, and C. krusei have been considered the second, third, and fourth common causative agents of the disease, respectively (32, 34, 35). The frequency of C. glabrata in the present study was 5.4% as the second agent of the disease. However, two reports from India and Amman indicated that C. glabrata was isolated from 50.4% and 32.5% of patients with VVC, respectively (32, 33).

The findings of the current study revealed that C. kefyr was isolated from two (1.4%) patients; it was consistent with other investigations previously done by Fornari et al. (2.5%) (25), Gharaghani et al. (0.65%) (20), and Alfouzan et al. (1.9%) (26). However, in the study conducted by Mohammadi et al. (36), C. kefyr was reported as the third etiologic agent of fungal vulvovaginitis in Iran. The outcomes of the present research revealed that 4% of the studied cases showed infection with more than one Candida spp. This result was consistent with the study conducted by Gharaghani et al. (20) reporting the prevalence of mixed infection as 5.63%. The rise of VVC incidence and drug resistance leads to an important public health issue and challenges clinicians’ treatment strategies (37).

Antifungal susceptibility surveillance investigation has played a key role in pursuing the progress of antifungal resistance and beginning primary antifungal therapy (37). According to the findings in the current research, CAS (GM, 0.075 µg/mL), VRC (GM, 0.091 µg/mL), ITC (GM, 0.15 µg/mL), AMB (GM, 0.22 µg/mL), CLO (GM, 0.23 µg/mL), and KTO (GM, 0.28 µg/mL) had good activity against all Candida isolates. Candida kefyr shows that CAS had the lowest GM MIC with 0.073 µg/mL, 0.099 µg/mL, and 0.06 µg/mL against C. albicans, C. glabrata, and Candida kefyr strains, respectively. The previous studies confirm that this drug has potent in vitro activity against Candida strains (38, 39). The present research results showed no resistance to CAS among C. albicans strains; however, two strains of C. glabrata were susceptible-dose-dependent (SDD) to this drug (Table 1).

The present study showed 7.1% C. glabrata resistance to FLU, as well as 4.5%, 3.75%, 1.5% C. albicans strains resistance to ITC, FLU, and AMB, respectively, being in line with the results of prior studies (38-40). In the current research, in vitro susceptibility test done for C. albicans isolates showed 100% susceptibility to VRC, being in line with several earlier results (39, 43). However, the findings of Mukasa et al. in Uganda showed resistance of C. glabrata (36.7%) to CLO and C. albicans (6.6%) to VRC (42). Prior studies revealed that 10.5% of C. albicans isolates showed VRC resistance, which is not consistent with our study (44). In the study conducted by Fornari et al. (25) in Brazil, the Candida strains separated from cases with complications showed NYS resistance; however, they were sensitive to KTO, as observed by an in vitro sensitivity profile. Based on the results of the present work, NYS and KTO had lower and higher MIC, respectively, as compared to Fornari et al. findings.

The predominant causative agents of VVC in this study were C. albicans. Candida glabrata, which demonstrated a decreased susceptibility to azoles, was recognized. According to the current research results, CAS and VRC had the lowest MIC against all Candida isolates, respectively. However, resistance to azole among the Candida isolates in our study, which are generally used for the management of VVC, was shown that before the onset of the therapy, a comprehensive mycological assessment is needed for identifying the causative agent.

The authors thank the participants for their involvement in this project.