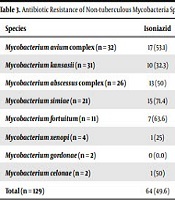 Non-tuberculous mycobacteria (NTM) are widely associated with pulmonary diseases. Evidence is lacking on the transmission of NTM from one person to another. Hence, it has gained lower public health priority than tuberculosis.

We determined the prevalence and antibiotic resistance rate of NTM isolated from sputum samples of patients with pulmonary infections.

Mycobacterium avium complex was the predominant species identified, and the majority of the organisms were resistant to commonly used anti-tuberculosis drugs. The high prevalence of NTM and drug resistance towards the tested antibiotics suggests that NTM can no more be ignored as a contaminant, reiterating the need for periodic surveillance and species-specific treatment for effective management of diseases caused by NTM.

The non-tuberculous mycobacteria (NTM) represent the Mycobacterium species that are not members of the Mycobacterium leprae and M. tuberculosis complex (1). Non-tuberculous mycobacteria are ubiquitous mycobacterial species that are found worldwide and cause various infections, particularly pulmonary infections that are difficult to diagnose and treat (2). They have also been widely associated with pulmonary diseases, of which chronic pulmonary disease is the most common clinically encountered syndrome (3). Due to the lack of definitive evidence on the transmission of NTM from one person to another, NTM has gained lower public health priority than tuberculosis (4). The incidence and prevalence of NTM lung diseases are increasing worldwide. The common causative organisms of pulmonary infections include slow-growing mycobacteria (SGM), including M. avium complex (MAC) and M. kansasii, and rapid-growing mycobacteria (RGM) including M. abscessus complex (5).

The percentage of NTM lung infection increases with age but varies significantly between countries (6). The prevalence and the mortality rate due to NTM disease have been progressively rising worldwide (2). A study conducted between 2004 and 2006 in the USA suggested that the mean annual site-specific prevalence rates ranged from 1.4 to 6.6 per 100,000 individuals (7). Another population-based study conducted in five states of the USA revealed that the estimated NTM disease prevalence increased from 9.2 to 15.2 per 100,000 persons between the years 2008 and 2013 (8). A study from the UK reported an increase in the incidence of pulmonary NTM-positive cultures from 4.0 to 6.1 per 100,000 people from 2007 to 2012 (9). Another study revealed that the annual prevalence of NTM in a population with > 65-years-old significantly increased from 20 to 47 cases/100,000 persons from 1997 to 2007. Of these, 90% of the individuals were Caucasians, and the remaining persons were Blacks and Asians/Pacific Islanders (6). In China, the isolation rate of NTM increased from 3% in 2008 to 8.5% in 2012 (10). Non-tuberculous mycobacteria usually cause chronic lung infection and are recognized as one of the major emerging pathogens. They are often misdiagnosed as multidrug-resistant tuberculosis (MDR TB) due to the difficulty in distinguishing the clinical symptoms between TB and NTM disease (11).

Non-tuberculous mycobacteria are also resistant to many of the first- and second-line drugs used to treat tuberculosis; hence, an accurate diagnosis and drug-susceptibility testing are crucial for effective clinical management of NTM infections (12). A study from China reported high drug resistance by NTM to first-line anti-TB drugs, of which 30.7% of the isolates were suspected to be of MDR-TB cases and 4.0% of TB re-treatment cases. The results indicate that pulmonary infections caused by NTM may lead to substantial difficulties in the treatment of NTM and MDR-TB diseases in China (13). The microscopic observation drug susceptibility (MODS) assay is an economical, highly sensitive, and rapid method for the detection of M. tuberculosis (14). The World Health Organization (WHO) has recommended MODS as an affordable and highly effective alternative to existing gold standard liquid mycobacterial culture methods for testing sputum samples of TB suspected individuals (15). Although MODS has several advantages, due to concerns about the biosafety and efficiency of large sample handling, the use of MODS is very limited in resource-limited settings (16).

In high-TB-burdened settings, a large number of sputum samples are to be processed, and doing MODS requires more resources and time due to the manual reading of every well by trained laboratory professionals. Furthermore, the ability of MODS in differentiating M. tuberculosis and NTM is questionable (17). To overcome these shortcomings, a recent study by Wang et al. (16) attempted to evaluate the automated MODS (auto-MODS) assay and evidenced that in resource-limited settings, auto-MODS could be a cost-sensitive and effective alternate diagnostic tool for TB diagnosis (16).

The present study determined the prevalence and antimicrobial susceptibility of non-tuberculous mycobacteria isolated from sputum samples of patients with pulmonary infections.

Consecutive patients who were suspected of pulmonary and extra-pulmonary tuberculosis and admitted to the Department of Laboratory Medicine, Danyang People’s Hospital of Jiangsu Province, China, between April 2018 and September 2019 were included. Patients with confirmed TB were excluded from the study. Informed consent was obtained from each patient or their legal heirs. Early morning well-coughed sputum samples were collected. The collected sputum samples were stored immediately at 2 - 4°C and processed within seven days. Sputum samples were processed using modified Petroff’s method, as described by Tripathi et al. (18). Briefly, 3 - 5 mL of the sputum sample was homogenized with an equal volume of 4% NaOH in a shaker for 15 min. The homogenate was spinning for 15 min at 3,000 rpm. Then, the supernatant was discarded, and 20 mL of sterile distilled water was added to the deposit for neutralization. Again, the sample was spinning for 15 min at 3,000 rpm. After processing, the sputum samples were split into different aliquots in a sterile screwcap container. Of these, only the acid-fast bacilli (AFB)-positive sputum samples were used for further analysis.

The sputum sample from one screwcap vial was inoculated into BACTEC 960 mycobacterial growth indicator tubes (MGIT, BD Diagnostics, USA) and observed for 42 days. The test was performed in duplicate, and the tested sample was considered positive only if both showed growth. The GenoType Mycobacterium CM/AS line probe assay (Hain Lifescience, Nehren, Germany) was used for the species-level identification of mycobacteria.

Drug susceptibility through the auto-MODS technique was performed as described by Wang et al. (17). In this study, there were four modifications proposed for the original MODS assay (14, 19). A p-nitrobenzoic acid (PNB) tube was used in the auto-MODS assay to differentiate TB and NTM. So, PNB inhibits the growth of M. tuberculosis, while NTM differentiates TB and NTM resistant to PNB (14). An automatic computer-assisted digital camera was used to reduce human resource requirement for frequent readings and the images captured were used in auto-MODS. Antibiotics tested in this study included isoniazid (0.1 µg/mL), rifampicin (1 µg/mL), ethambutol (5 µg/mL), streptomycin (1 µg/mL), amikacin (1 µg/mL), levofloxacin (2 µg/mL), and ofloxacin (2 µg/mL). Antibiotic concentrations were determined based on the GLI Mycobacteriology Laboratory Manual (20). After inoculation, the tubes were incubated at 37°C, and daily images of the tubes were taken through the computer-assisted digital camera, which was integrated with the incubator. The interpretation of auto-MODS is as same as that of the MODS assay, except that a PNB negative (no growth of TB) tube was interpreted as TB-positive, and the PNB positive tubes were interpreted as NTM-positive. The presence of growth in drug-containing tubes indicated resistance towards the drug present in the tube.

The adaptive biological property and opportunistic potential of NTM make them ubiquitous microorganisms present in diverse clinical and environmental scenarios. The prevalence of NTM varies globally. They are associated with several infections, especially in immunosuppressed/immunocompromised patients (21). The association of NTM with pulmonary diseases, especially chronic pulmonary disease, is most commonly encountered in different clinical settings (3). Due to the lack of definitive evidence on the transmission of NTM from one person to another, NTM has gained lower public health priority than tuberculosis (4). Due to the existing burden of M. tuberculosis in several countries and the limited availability of rapid molecular methods, NTM is considered extremely low priority organisms (22). Besides, NTM is often misdiagnosed as MDR TB, and is being treated with anti-tuberculosis drugs such as isoniazid and rifampicin. The misdiagnosis of NTM for M. tuberculosis, the overuse of anti-tuberculosis drugs, and the selective pressure in the hospital environment have contributed to the development of resistance to several antibiotics.

The American Thoracic Society has suggested a repeat culture of sputum to establish pulmonary disease (3). Generally, NTM isolated from a single-sputum sample is considered a contaminant and often disregarded in the clinical setting. Thus, in our study, bacterial growth was assessed in duplicate samples, and a particular sputum sample was termed as NTM-positive only if both of the duplicate samples showed the presence of growth. The NTM lung infection rate increases with age but varies significantly between countries (6). In our study, the majority (41.1%) of the NTM positive patients were in the older age group of 51 - 70 years, and the rate decreased as the age group decreased. Similar to our study, a study from the United Kingdom, which reported the longitudinal trends of NTM isolation and drug susceptibility between 2000 and 2013, revealed that the majority of NTM-positive patients were in the age group of 51 - 70 years (23). In our study, HIV patients were significantly higher (P = 0.0141) in the overall AFB-positive group than in the NTM-positive group. Of the 35 HIV-positive patients, sputum samples from 19 patients showed the presence of TB. In those patients, there is a very high possibility that these patients acquired TB as a co-infection of HIV.

It was reported that the NTM prevalence varies significantly between countries (6). All the previous studies used the culture method to detect NTM, the suggestion of The American Thoracic Society of repeat culture of sputum to establish pulmonary disease was mostly ignored, and NTM is often disregarded as a contaminant (3). Also, the lack of a definitive technique to identify NTM could contribute to the lower prevalence rates reported in earlier studies (21, 23, 24). The use of the advanced BACTEC technique with duplicate samples gave us the confidence that the positive samples could not be discarded as a contaminant, and it could increase the identification rate of NTM in our study.

The use of anti-tuberculosis drugs in specific clinical settings plays a major role in determining antibiotic resistance. A study from China reported high drug resistance by NTM to first-line anti-TB drugs; 30.7% of the isolates were suspected to be of MDR-TB cases and 4.0% of TB re-treatment cases; the study suggests that pulmonary NTM infections could cause substantial difficulties in the clinical management of NTM and MDR-TB diseases in China (13). A predominant number of our isolates were resistant to rifampicin and routinely used anti-tuberculosis drugs, indicating that NTM has been exposed much to the drug due to overuse, which led to selective pressure and might have contributed to the commonly used anti-tuberculosis drugs.

The limitations of the study include the non-availability of clinical and radiological data, which could have revealed the clinical significance of the isolates; with the limited data available from the microbiology, we could not determine additional evidence of NTM infections such as positive cultures from other centers and the history of the disease condition.

Mycobacterium avium complex was the predominant species identified, and the majority of the organisms were resistant to commonly used anti-tuberculosis drugs. The high prevalence of NTM and drug resistance towards the tested antibiotics suggests that NTM can no more be ignored as a contaminant, reiterating the need for periodic surveillance and species-specific treatments for effective management of diseases caused by NTM.