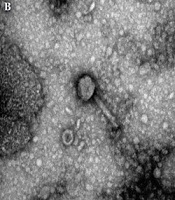 In the present study, we evaluated the effects of combinations of bacteriophages and antibiotics against multidrug-resistant (MDR) Klebsiella pneumoniae.

Two MDR strains (GenBank no. MF953600 & MF953599) of K. pneumoniae were used. Bacteriophages were isolated from hospital sewage samples by employing a double agar overlay assay and identified by transmission electron microscopy. For further characterization of bacteriophages, the killing assay and host range test were performed. To assess therapeutic efficacy, phages (7.5 × 104 PFU/mL) were used in combination with various antibiotics.

The results of the current study showed that phage-antibiotic combination was a potential therapeutic approach to treat the infections caused by MDR K. pneumoniae.

Antibiotic resistance is a growing health threat across the globe. Multidrug-resistant (MDR) pathogens are associated with increased morbidity and mortality and pose a substantial economic impact on the health care systems of low- and middle-income countries (LMICs) like Pakistan (1-5). Klebsiella pneumoniae is a well-recognized MDR pathogen, which has acquired substantial health significance in recent years. The organism is a Gram-negative bacterium belonging to the enterobacteriaceae family and an opportunistic pathogen responsible for various infections (e.g., abscess, UTI, etc.). The bacterial infections caused by this bacterium show a mounting ability to acquire resistance against various antibiotics (6, 7). In fact, infections by MDR K. pneumoniae strains are increasing in health care settings worldwide (8, 9). Prolonged hospitalization and high mortality rate are the common consequences of various infections caused by MDR K. pneumoniae (10).

Multidrug-resistant K. pneumoniae is a known cause of hospital-acquired infections (HAIs), inflicting high mortality rates primarily in immunocompromised patients and neonates. It is considered an urgent health threat across the globe, particularly in endemic regions, and is associated with severe community-acquired infections (CAIs) like meningitis and pneumonia (10, 11). The management of the infections caused by MDR K. pneumoniae is generally costly due to continuing and difficult to curb antibiotic resistance. The exact treatment plan for MDR K. pneumoniae must be validated in various health care systems, especially in developing countries. The emergence of MDR strains of K. pneumoniae has impelled researchers to seek alternatives to the antibiotics routinely used in health care facilities. To treat the infections caused by K. pneumoniae, new antibiotics, as well as new approaches, are needed (12).

Phages are the most abundant organisms on the earth and are known as the natural enemy of bacteria. Lytic bacteriophages infect bacteria and take over the host’s machinery to replicate themselves, ending up in bacterial rupture following the release of phases. In order to treat the infections caused by MDR K. pneumoniae, phage therapy has been suggested as a reliable strategy. A few specific phages have been shown to not only target but also destroy some distinct virulence factors of K. pneumoniae, particularly its capsular polysaccharides (CPs), which are among immune-dominant antigens of K. pneumoniae (8). Phages have some advantages over antibiotics, like host specificity, the ability to degrade biofilms, and low toxicity against human cells. Additionally, bacteriophages may replicate at the infection site, making them readily available at high numbers at the target location (13). However, similar to antibiotics, using phages alone has not been an effective remedy against different bacterial infections (14).

Instead of using antibiotics alone, phage-antibiotic combination therapy may be more effective in eradicating bacterial infections. Combined phage-antibiotic therapy is a promising approach for eliminating bacterial infections and limiting the evolution of therapy-resistant diseases (15). The phenomenon of phage-antibiotic synergy (PAS) defines an increase in the number of phages when a sub-lethal concentration of an antibiotic is provided to the host (16). Improved pathogen eradication, efficient biofilm degradation, and low rates of bacteriophage resistance are some key benefits of the combined therapy. Several studies have demonstrated the potential of combination therapy to treat various infections caused by MDR K. pneumoniae (17).

The current study was designed to exploit the potential synergistic effects of phage-antibiotic combination therapy on K. pneumoniae isolated from clinical specimens. To the best of our knowledge, no such study has been reported from Pakistan.

Sewage water samples were collected from various regions including the Allied Hospital, District Headquarter Hospital, Children Hospital, and Prime Care Hospital of District Faisalabad (Punjab, the 3rd most populous city of Pakistan). Standard MDR isolates of K. pneumoniae with the allotted accession No. of MF953600 & MF953599 (18) were obtained from the Department of Microbiology, Government College University Faisalabad. The isolates were grown on Luria-Bertani (LB) media (Merck, Germany) at 37°C for 24 hours to isolate bacteriophages.

3.2. Isolation and Purification of Bacteriophages

For isolating lytic bacteriophages, K. pneumoniae strains were used as hosts, as described elsewhere (19). Briefly, sewage water (25 mL) was centrifuged at 4500 g for eight min at 4°C to remove soil and debris. The supernatant was collected, supplemented with 1 mmol CaCl2, and then mixing (1:1) with the two-fold bacterial dilution prepared in LB. The mixture was incubated at 37°C for 15 hours in a shaking incubator (75 rpm). Subsequently, centrifugation was performed at 6000 g for 15 min at 4°C; the supernatant was filtered using 0.22 μm Whatman® qualitative filter paper (Sigma-Aldrich, USA). Bacteriophages in the filtrate were confirmed by employing the double-layered agar method (11). Phage purification was done by sub-culturing single plaques; the process was repeated thrice to completely purify phages (20). To obtain endotoxin-free bacteriophages, the preparation was passed through Detoxi-Gel™ (ThermoFisher Scientific, USA). Finally, the purified bacteriophage preparation was kept at 4°C till further processing. The temperature, pH, and chloroform sensitivity of purified phages were also investigated.

The one-step growth assay was performed as described previously (21). The bacteriophage was added with a concentration of 0.1 multiplicity of infection (MOI) to the fresh broth containing each of the isolates of MF953600 and MF953599. To facilitate adsorption, incubation was done for 45 min at 37°C. Afterwards, the medium was centrifuged at 10,000 g for 15 min at 4°C, and after the removal of supernatant, the pellet was dissolved in LB broth and incubated in a shaking incubator at 37°C. The spot method was used to determine bacteriophage titer.

The minimum inhibitory concentration (MIC) of antibiotics was estimated by the broth microdilution assay as described earlier (9). Briefly, 0.5 McFarland standards were prepared using freshly grown K. pneumoniae. A range (0.06 μg/mL to 256 μg/mL) of antibiotic dilutions was prepared in 96-well microtitration plates (Sigma-Aldrich, USA). The plates’ wells showing turbidity were used to obtain inoculum for streaking; then bacterial growth was confirmed by streaking on a nutrient agar plate. Results were analyzed according to CLSI 2019 guidelines.

To obtain freshly grown hosts, K. pneumoniae culture was dispensed in LB broth and incubated in a shaking incubator (120 rpm) for 8 hours at 37°C. The bacterial pellet was suspended in PBS to reach OD600 (2 × 108 CFU/mL). Different concentrations of bacteriophages and cocktails were used (2 × 108, 2 × 109, and 2 × 1010), and PBS treatment served as control. Incubation was done for 15 hours at 37°C in a shaking incubator (120 rpm). Host growth was estimated at the regular intervals of 10 min by recording OD600. To determine the efficacy of the phage-antibiotic combination, phages (7 × 104 PFU/mL) were combined with various antibiotics. Fifty μL of freshly grown K. pneumoniae (108 CFU/mL) was dispensed in the wells of a microtitration plate containing 50 μL nutrient broth, and the plates were incubated at 37°C for 24 hours. Then 100 μL of the phage-antibiotic (1: 1) combination was dispensed in the same well, and incubation continued at 37°C for 24 hours. The MOI of bacteriophages was set at 0.01, and the concentration of the antibiotic used was 512 μg/mL (22). Bacterial growth was assessed at the regular intervals of 10 min by estimating OD600. All assays were run in triplicates.

Overall, four phages were isolated from the collected samples, and the purification of lytic phages was performed against K. pneumoniae. According to the TEM analysis of purified phages, three of the bacteriophages with contractile tails and icosahedral heads (50 ± 2 nm-long) belonged to the Myoviridae family (Figure 1B); other types of the bacteriophages (01) identified by TEM belonged to the Siphoviridae family and had long non-contractile tails (100 ± 5 nm long) (Figure 1C). Moreover, when K. pneumoniae isolates were dispensed with purified bacteriophages, clear plaques surrounded by a halo were observed (Figure 1A). 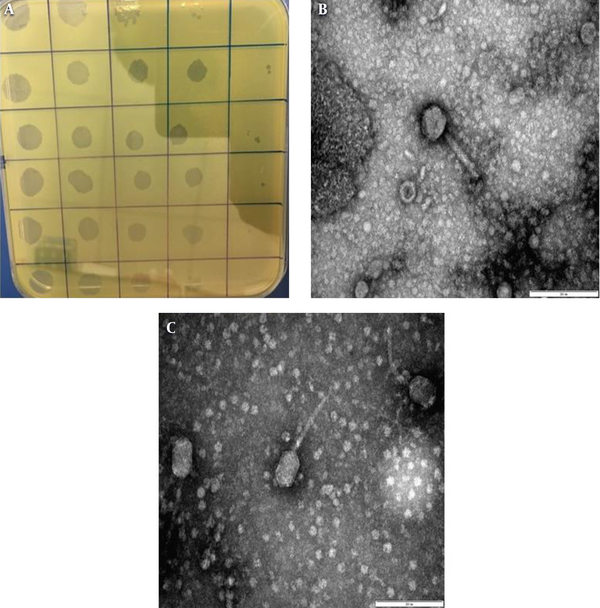 4.3. The Lytic Potential of Phage-Antibiotic Combinations 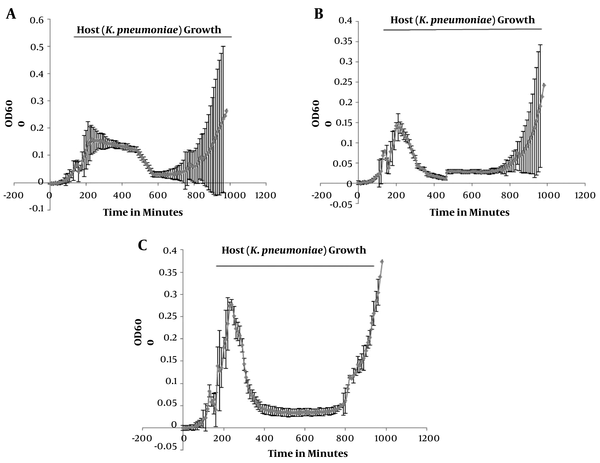 The current study was conducted to find an alternative approach to treat the infections caused by MDR K. pneumoniae. For this purpose, K. pneumoniae isolates were treated with two different antibiotic-bacteriophage combinations. Multidrug-resistant K. pneumoniae is challenging to treat, and phage-antibiotic combined therapy is considered an amicable strategy (13) that may restrain the emergence and spread of resistance among pathogens (15). Additionally, combined phage-antibiotic therapy produces better bacterial suspensions than either antibiotics or phages alone (15).

In this study, we found that phages in combination with antibiotics effectively reduced the growth of MDR K. pneumoniae. Moreover, they displayed a synergistic effect with antibiotics in killing K. pneumoniae. Several studies have reported the effectiveness of phage-antibiotic combined therapy in restricting the growth of bacteria. The results of the current study are in accordance with a study showing that antibiotics in sub-inhibitory concentrations facilitated the phage-mediated killing of pathogens (a phenomenon called PAS) (16). Various factors that may affect the PAS process include the route of administration, concentration, dosage, complementary, and regimens of the bacteriophages.

The findings of this study showed that the antibiotic sensitivity of K. pneumoniae isolates was restored when the combined (phage-antibiotic) therapy was used. It was also demonstrated by Chan et al. (2016) that the combination therapy re-established antibiotic sensitivity, mainly when the phage interacted with the efflux systems of the pathogen (23). The combined therapy also resulted in a significant log reduction (P = 0.008) in the growth of the host bacterium, indicating the usefulness of the bacteriophage-antibiotic combination in treating MDR K. pneumoniae. In exposition to combined phage-antibiotic, K. pneumoniae log reduction was significant and abrupt compared to either individual phage or cocktail treatment. The reduction of the host bacterium count may be because of the even distribution of phages and antibiotics around dividing bacteria, allowing phage enzymes like depolymerase to degrade bacterial surface-associated proteins such as CPs and facilitating the action of antibiotics. Cefepime is a β- lactam antibiotic that effectively restricts the growth of dividing bacteria and inhibits the synthesis of cell wall components, particularly peptidoglycans.

The findings of the current study are in accordance with those of a previous study conducted to assess the synergistic effect between amoxicillin and a bacteriophage against K. pneumoniae. For this purpose, planktonic K. pneumoniae was grown and exposed to the combination of the bacteriophage and amoxicillin, which significantly reduced the bacterial load. This observation was consistent with our findings that showed the same pattern of reduction in the bacterial load following treatment with the bacteriophage-antibiotic combination (22). It has been reported that PAS may be due to the selective pressure imposed by bacteriophages, leading to the production of sensitive and low-virulent bacterial strains. Consistently, bacteriophages may diffuse rapidly and destroy susceptible hosts, protecting the fibrin matrix against bacteria-mediated disintegration. Furthermore, bacteriophages in combination with sub-lethal antibiotic concentrations may inhibit the regrowth of bacteriophage-resistant bacteria, suggesting the combined therapy as a viable option against MDR K. pneumoniae. Many studies have proposed the effectiveness of PAS against different pathogens (16, 24). These studies also demonstrated the possible mechanisms behind this synergism, indicating that antibiotic-mediated bacterial multiplication might assist bacteriophages to access the target host (25).

Overall, combined therapies based on PAS should be implemented in vivo, as conducting an in vitro experiment was a limitation of the present study. Additionally, only one bacterial host was used in this study. Still, the findings of the present study promise further in vitro and in vivo investigations regarding the molecular aspects of PAS. Although, in vitro, a significant log reduction was observed in the growth of the host bacterium treated with the phage-antibiotic combination, in vivo studies are warranted to verify the applicability of this method in clinical settings. In fact, combination therapy is a new research field and has a great potential to treat resistant bacterial infections causing substantial public health menace across the globe.