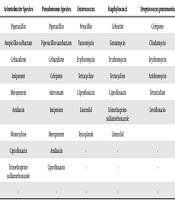 Ventilator-associated pneumonia (VAP), a subset of hospital infections, occurs in patients who have been mechanically ventilated for at least 48 hours.

Our study aimed at determining the frequency and antibiotic susceptibility patterns of bacteria causing VAP in teaching hospitals of Shiraz.

This was a descriptive cross-sectional study conducted in Shiraz for eight months (November 2017 to June 2018). Samples were detected according to diagnostic bacteriologic tests, and antibiotic susceptibility tests were performed by the disk diffusion (Kirby-Bauer) method based on the Clinical and Laboratory Standards Institute (CLSI).

A total of 51 patients with VAP were examined, of whom 10 and eight patients had a chronic obstructive pulmonary disease and acute respiratory distress syndrome, respectively. The late-onset VAP rate (61.7%) was higher than the early-onset VAP rate (38.3%). In our study, 45.2% of patients with VAP received antibiotics before the incidence of pneumonia, of whom 31.6% died. Of the remaining 54.8%, only 8.7% died. In other words, patients who received antibiotics before the incidence of pneumonia had higher mortality. The most frequently used antibiotics were meropenem (76.6%) and vancomycin (78.7%). Among 59 bacteria isolated, Acinetobacter and Pseudomonas were the most prevalent organisms.

Our results showed that most of the isolates (40%) belonged to multi-drug resistant (MDR) pathogens. Probably, antimicrobial treatment before the onset of VAP led to the selection of these MDR pathogens.

To diagnose the etiology, a positive culture of lower respiratory tract secretions is needed. The most important sampling techniques are endotracheal tube aspiration (ETTA), bronchoalveolar lavage (BAL), and protected specimen brushing (PSB) (4, 6). Endotracheal tube aspiration has a very high sensitivity (90 - 100%) so that it is considered a gold standard. The length of the treatment period is also important. According to studies conducted, most patients with VAP who have received suitable empirical antibiotic therapy had a good clinical response within the first six days of treatment (7). Long-term treatment can lead to colonization with resistance to antibiotics. Patients who receive a shorter period of antibiotic treatment show better clinical outcomes than those with longer treatment periods (8).

As multi-drug resistant (MDR) strains are increasing day by day and there is a high mortality rate of VAP, the awareness of the occurrence of VAP, identification of causing pathogens, and their antimicrobial susceptibility patterns are necessary to improve and promote the hospital infection control system. This, in turn, will help employ effective methods of prevention, control, and improvement of empirical treatments, as well as reducing VAP incidence and resultant mortality. Our study aimed at determining the frequency and antibiotic susceptibility patterns of bacteria causing VAP in teaching hospitals of Shiraz.

This was a descriptive cross-sectional study performed on all patients who had been hospitalized in the internal wards and ICUs of teaching hospitals of Shiraz and had acquired VAP during their hospitalization within eight months (November 2017 to June 2018). This study aimed to determine the frequency of bacteria causing VAP and their antimicrobial susceptibility patterns. All patients who had no symptoms of pneumonia at the time of intubation but had pneumonia at least 48 hours after intubation were included in the study. The diagnostic criteria for having VAP were considered in the presence of at least two of the following cases: A fever above 38°C (hypothermia), leukocytosis or leukopenia, respiratory purulent secretions, a new or progressive infiltrate, consolidation or cavitation in chest radiography (3).

The patient’s endotracheal tube aspiration inside Falcon under sterile conditions was transferred to the laboratory of Shiraz School of Medicine. Then, the specimens were cultured and isolated on blood agar, MacConkey agar (in the aerobic atmosphere), and chocolate agar (with 5% - 10% CO2 pressure). All culture media were from HiMedia, India. At the same time, to check the possible contamination and identify the morphotype of organisms, Gram staining was done. After purification, the samples were Gram re-stained and the primary diagnostic tests (catalase and oxidase tests) were performed. To detect Gram-positive cocci, production of catalase, coagulase, DNase, and oxidase enzymes, Mannitol fermentation, and susceptibility to bacitracin, optochin and novobiocin, bile esculin test, (6.5% Nacl), Type of hemolysis (α, β, and γ) was checked. To detect of MRSA, 30 µg cefoxitin disk was also used.

The disk diffusion (Kirby-Bauer) method was used to test the sensitivity to different antibiotics. Antibiotics that were used for antibiograms are listed in Table 1. Antibiotics were from HiMedia, India. The results of the inhibition zone were interpreted according to the CLSI 2018 standards, and SPSS16 software was used for statistical analysis of the data.

A total of 51 patients with VAP (hospitalized in the internal wards and internal ICUs of teaching hospitals of Shiraz) were sampled. After culture, 47 bacteria and two yeasts grew in media, and two samples did not grow. Therefore, 47 patients were included in the study. Yeast strains were excluded from the next process. The average age of the patients was 66 (range, 25 - 98 years); the average hospitalization period was 13.44 days (range, 3 - 45 days), and the average mechanical ventilation period was 11.73 days (range, 2 - 45 days). In this study, the mortality rate was 38%. Different reasons for hospitalization included: 10 cases of chronic obstructive pulmonary disease, eight cases of acute respiratory distress syndrome, seven cases of urosepsis, five cases of brain stroke, five cases of heart disease, two cases of sepsis, two cases of surgery, one case of cesarean section, one case of asthma, one case of lung fluid accumulation , one case of diabetes, one case of lung cancer, one case of blood cancer, one case of N1H1 influenza, and one case of kidney failure.

In this study, the late-onset VAP (61.7%) was more prevalent than the early-onset VAP (38.3%). The average calculated Clinical Pulmonary Infection score (CPIS) of patients was 8 (range, 6 - 10). The most commonly used empirical antibiotics were meropenem (76.6%) and vancomycin (78.7%). These two antibiotics were used in most cases as combined antibiotics. Information on the primary antibiotic treatment is presented in Table 2. As shown, 47 patients were included in the present study (two patients were excluded from the study due to the lack of culture growth and two patients due to yeast growth in clinical samples).

Ventilator-associated pneumonia is one of the prevalent infections with high mortality in patients hospitalized in ICUs in most parts of the world. The prevalence of VAP in different regions is different according to several studies conducted (4, 10, 11). In the present study, the incidence of VAP was lower in teaching hospitals of Shiraz (especially Namazi Hospital). The reasons for the low incidence are as follows: (1) In the ICU of Namazi hospital, the ratio of the number of nurses to the number of patients is 1:1, while in a study in India (12), the ratio was 3:17; (2) Namazi Hospital has an active infection control committee that highly emphasizes the hygiene of the personnel, especially washing the hands; (3) care and protection of patients are done very carefully and patients are suctioned on time; (4) traveling in the ICU is prohibited, and patients are not accompanied by anyone else, except the nurse and the doctor.

Determining the factors that affect the extent of mortality will provide a better prognosis (13). In our study, 45.2% of the patients with VAP received antibiotics before the incidence of pneumonia, of whom 31.6% died while of the remaining 54.8%, only 8.7% died. In other words, patients who received antibiotics before the incidence of pneumonia had higher mortality. On the other hand, the most common microorganisms isolated from patients were Acinetobacter (28.8%) and Pseudomonas (18.6%), which are considered MDR pathogens. Probably, antimicrobial treatment before the onset of VAP has led to the selection of these MDR pathogens (14).

In our study, overall, 70.6% of isolated Acinetobacter species were sensitive to meropenem and 76.5% were sensitive to amikacin; in other words, they are the best coating for Acinetobacters. In the case of Pseudomonas, the highest susceptibilities were observed for meropenem, imipenem, and ciprofloxacin (90%, 80%, and 70%, respectively) and they appeared to be the best treatment against these bacteria. Meropenem seems to be the best coating for both bacteria. Also, in our study, the sensitivity of Gram-positive bacteria to linezolid was 100%. However, it is better to use vancomycin for treatment because linezolid is an alternative drug for treating VAP resulting from MRSA. If a patient has renal failure or receives drugs that cause renal toxicity, linezolid is preferable to vancomycin because it is difficult to determine and adjust the dose of vancomycin in patients with renal failure and it needs frequent monitoring of its blood levels (4). Therefore, it is suggested that vancomycin be used in the empirical treatment of MRSA, which is considered the standard treatment for MRSA, and linezolid be stored for specific cases. To make the study more precise, the samples needed to be taken before the administration of antibiotics, but usually, the patients immediately received broad-spectrum antibiotics. The low sample size was due to the lack of proper cooperation of nurses and doctors to collect samples.

Our data showed that most isolates (57%) were related to MDR pathogens. Probably, antimicrobial treatment before the onset of VAP led to the selection of these MDR pathogens. The most common organisms in the last study in Shiraz were A. baumannii, followed by MRSA and P. aeruginosa, but in our study, P. aeruginosa ranked second.