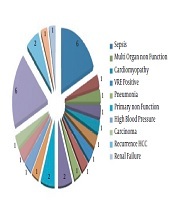 Human cytomegalovirus (CMV) is the major complication of viral infection in immunocompromised patients. This opportunistic infection is associated with high morbidity and mortality in transplanted recipients.

The present study aimed to determine CMV burden and assess the clinical outcome in the liver recipients with CMV reactivated infection at Nemazi Hospital, Shiraz, Iran.

This retrospective study examined 657 patients who underwent liver transplantation during 2014 - 2017 to identify the CMV infection, morbidity, and mortality rates. To this end, the medical records of such patients were reviewed, and their rejection/survival rates were analyzed. Accordingly, the CMV infection was diagnosed by Taq-Man real-time PCR assays.

In this study, 151 (23%) had CMV reactivation at least one year after liver transplantation. Viremic patients had a viral burden between 300 - 738790 copies/mL. In this study, 41 persons (6.2%) died, and 58 liver transplant patients (8.8%) had rejection experience up to one year after their operation. Among the 41 dead patients, 21 and 20 cases were with and without CMV-reactivation, respectively. The results demonstrated that the mortality rate was significantly higher in the CMV-infected patients than the non-CMV-infected counterparts. In contrast, the graft survival rate was not significantly different between the two groups (P ≤ 0.05).

In the present study, CMV infection can serve as a significant mortality predictor in LT patients.

Human cytomegalovirus (CMV) is a ubiquitous virus from the Herpesviridea family, β-herpesvirinea subfamily, alternatively known as HHV5 (Human herpes virus-5) (1, 2). Human cytomegalovirus infection is a life-threatening infection in immunocompromised patients, especially HIV sufferers and organ transplant recipients (3, 4). Despite much advancement in controlling CMV infection since the first successful liver transplantation in 1967, the virus had remained as the most important pathogen influencing the outcome of liver transplantation (5, 6). Human cytomegalovirus infection can significantly increase morbidity and mortality rates among transplant patients. Depending on interrelated factors such as donor and recipient match, serological status, immunosuppressive drug regimes, the overall functionality of innate/acquired immunity system, and CMV viral factors, the incidence of CMV infection in such patients varies (6, 7). It is estimated that 16-47% of all liver transplant patients develop CMV diseases (6). Universal prophylaxis and preemptive therapy are the primary approaches to preventing direct and indirect adverse CMV effects as well as associated diseases induced by liver transplantation (8). In this regard, antiviral prophylaxis is more preferred (9, 10). Development of CMV diseases in patients without antiviral prophylaxis is expected during the first three months after transplantation. There is a delay in the onset of CMV diseases in those on prophylaxis drugs, with lower frequencies (10).

In the recent decade, newly developed diagnostic virological methods have improved CMV infection management in LT patients. Cytomegalovirus nucleic acid amplification tests, especially Taq-man real-time PCR assay, are susceptible and rapid tests utilized for the CMV disease prognosis, the evaluation of the CMV treatment efficacy, and preemptive therapy (11). Antigenemia is another CMV diagnostic test in the post-transplant operation period, which detects pp65 in the blood leukocytes. However, this particular test cannot be routinely used for neutropenic LT patients and cannot be applied to other body fluids of the sufferers as well (12, 13). Serology tests may be significant in patients who are seronegative before transplantation to follow up on the community-acquired diseases.

The CMV-specific IgM and IgG in serum samples were measured using commercial enzyme immunoassay kits in transplant recipient candidates. The above-mentioned tests are routinely utilized in diagnostic virology labs in Iran for the CMV infection diagnosis. The CMV reactivation and allograft rejection seem to have a bidirectional synergetic effect. Released proinflammatory cytokines such as TNF-α during acute rejection can reactivate the latent CMV genome. On the other hand, depleting leukocytes after the consumption of intensive immunosuppressive drugs following acute rejection can enhance CMV replication. Some studies have indicated that CMV can increase the allograft rejection risk in high-risk LT patients (14, 15).

In this study, we assessed the CMV infection in the post-liver transplant operation period and evaluated the correlation of the CMV viremia and organ rejection in liver organ recipients at Nemazi Hospital, Shiraz, Iran.

This retrospective study was performed on 657 patients who underwent LT from September 2014 to December 2017 at Nemazi Hospital, among whom there were 424 males (64.5%) and 233 females (35.5%). The patients’ mean age was 36.1344 ± 17.94 years. All patients who had undergone liver transplantation at our center, were released from the hospital at the time of the survey, and were residing in Iran were included in this study. In this study, 97% of liver recipients were R+/D+, low risk for CMV infection. All LT patients with positive CMV DNAemia were assumed to react since almost all of these patients were IgG positive before operation. All donors were cadavers. The study was approved by the ethics committee of the Shiraz University of Medical Sciences.

Methylprednisolone was administered parenterally as an immunosuppressive regimen, a high dose before and three days after the operation. Other drugs, including CellCept, cyclosporine, F.K., and tacrolimus, were administered instantly after transplantation in doses determined based on weight, age, and type of cirrhosis. Doses decreased and/or increased after one year.

In the present study, 657 LT patients were analyzed at intermittent intervals from 2014 to 2017. The participants’ mean age was 36.13 ± 17.94 y/o (1 - 75 y/o), and 424 persons (64.5%) were male. Different underlying diseases led to liver transplantation, the most common of which were end-stage hepatitis B virus infection and cryptogenic cirrhosis. The largest group receiving liver transplantation was aged 46-55 years (Appendix 1 in Supplementary File). Among all the patients, 151 persons (23%) had experienced CMV viremia at least once, while 506 cases (77%) were CMV negative by one year after the liver transplantation (Table 1). In the CMV-positive patients, gancyclovir was administrated for at least two weeks as long as two consecutive weekly samples were negative infection. The characteristics of some CMV-positive patients are displayed in Appendices 2 and 3 in Supplementary File.

All the LT patients received methylprednisolone to prevent rejection. There was no significant correlation between methylprednisolone consumption and the CMV infection. Ganciclovir was prescribed for those with CMV reactivation; hence, the CMV diseases were somehow prevented. Transplant rejection was observed in 58 patients (8.8%) (Figure 1), among whom there were 11 children with a mean age of 12.3 y/o. The viremic patients had viral load between 300 - 738790 copies/mL. Human cytomegalovirus DNAemia was detected in 13 out of 58 patients (Appendix 2 in Supplementary File), who had organ rejection experience, and their viral loads were up to about 800000 copies/ml. There was no significant correlation between CMV viral load and the rejection rate (P ≥ 0.05). 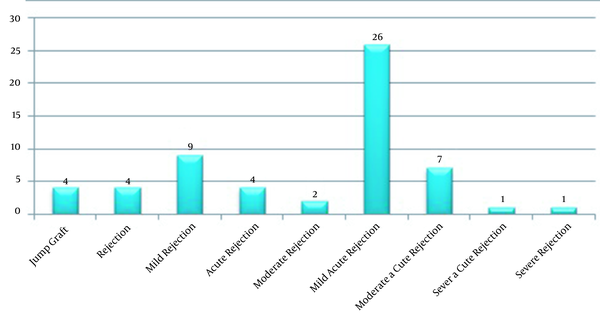 Different types of rejection were noticed in the affected patients (Figure 2), and a mild rejection was observed in one of six multiple organ transplant recipients. Among all the LT recipients, 41 persons (6.2%) died, of whom 21 persons were the CMV viremic patients (Table 2). The death factors are shown in Figure 2; however, there were no data about nine dead patients. Notably, 3 of the 41 deceased patients underwent re-transplantation more than once. The mortality rate was significantly higher for the viremic patients than the non-viremic ones (P ≤ 0.05); however, the rejection rates were not significantly different. As presented in Figure 2, five cases died from organ rejection, with one case dying from CMV pneumonia. It is noteworthy that most transplantation donors in this study were brain dead.

Human cytomegalovirus infection was a remarkable morbidity and mortality risk factor in LT patients. The clinical representation of the CMV infection varies from asymptomatic viremia to life-threatening diseases. In this study, about 60% of the LT patients revealed mononucleosis-like syndrome (namely fevers, myalgias, arthralgias, and malaise), hepatitis, and hematologic abnormalities. The most effective factor in the emergence of the CMV diseases during post-transplantation period was donor/recipients serostatus and the type of immunosuppression medication used after transplantation. In this study, the CMV genome burden was quantified by Taq-man real-time PCR assay as an accurate, rapid, and reliable test for LT patients. Human cytomegalovirus DNAemia positivity was 23% in the present study; however, Bordon et al. demonstrated that CMV DNAemia positivity was 12.8% (16). Moreover, the DNAemia positivity rate in previous studies varies from 15% - 50% (17).

We administered ganciclovir to prevent the CMV diseases in adult patients with the CMV reinfection. Notably, the amount of viral load was 300 - 738790 copies/mL among the participants. These patients underwent DNA monitoring weekly as long as they were negative twice consecutively. Martin-Gandul et al. (18) reported that the mean viral load of CMV disease episodes was 6620 copies/mL during post-transplantation. In their studies, 56.7% and 10.7% of the participants were diagnosed with CMV reactivated infection and disease. In Kim’s et al. (19) study, the overall incidence of CMV infection was 48% with a median of 3,300 copies/mL (range, 370 - 655,500 copies/ mL) in the first detection.

Wadhawan et al. showed that 13% of the patients had detectable CMV DNA three weeks after liver transplantation, while CMV disease occurred in 2.9% of the participants (20). In a study by Gao and Zheng (21), the CMV reactivation was noticed in 30% - 65% of LT patients, while 18% - 65% of the participants clinically presented the CMV disease 1 - 3 months after liver transplantation. In Harvala’s et al. (22) study, the one-year incidence of CMV disease was 19.2 and 31.3% in kidney and Lt patients who received Val ganciclovir prophylaxis in the D+/R- group, respectively; however, the incidence rates were 2.5% and 3.2% in the D-/R- group, respectively. One of the main causes of the CMV infection, which is somehow low in our center, may be the high percentage of seropositive individuals in our regions.

In this study, 58 rejected cases (8.8%) were observed, among whom the anti-rejection drug was correlated with the CMV reactivation and disease. Moreover, there was no statistical correlation between rejection and viral load, gender, age, and underlying diseases. Similarly, Gao and Zheng (21) showed that rejection had no significant correlation with gender, age, and underlying diseases. The present findings indicated that CMV infection was not correlated with immunosuppression regimens and underlying diseases, as Weigand et al. (23) also documented. In contrast with the findings of Wadhawan et al. (20), the present study documented the effect of CMV infection on the patients’ survival rate. Moreover, Malek Hosseini et al. (24) reported an acceptable survival rate in LT patients in their center. Accordingly, although the mortality rate of post-liver transplantation is acceptable, it can be reduced if the CMV infection is properly managed.

This study had several limitations. First, since our center serves as the only liver transplantation center in Iran, many patients are from different regions of the country and return to their regions as such information about their post-hospitalization as well as access to such patients were limited. Second, the present findings cannot be generalized to other populations because similar to some other developing countries, CMV seropositivity is high in Iran.

Since high CMV-associated diseases and mortality rates were noticed in liver transplant recipients, the timely diagnosis of this complication before the emergence of clinical symptoms is of paramount importance. Moreover, preventing the complication by monitoring the CMV genome burden after transplant should be considered, especially in young children and other patients at high risk of developing CMV infection.