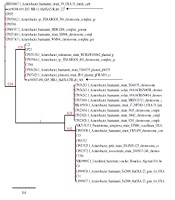 The study aimed to find out the antibiotic resistance (AMR) patterns and evaluate the AMR genes in clinical isolates from patients admitted to the surgical Intensive Care units (ICUs) at different hospitals in Lahore, Pakistan.

A total of 593 clinical specimens were collected from patients admitted to the surgical ICUs of three different local hospitals in Lahore, Pakistan. From these samples, a total of 90 A. baumannii isolates were identified and further investigated to observe phenotypic resistance patterns and detect carbapenemases resistance genes.

The present study indicated that the emergence of high carbapenem resistance in CRAB isolates has increased, which may pose serious limitations in the choice of drugs for nosocomial infections.

Antimicrobial resistance (AMR) due to ESKAPE pathogens (Enterococcus faecium, Staphylococcus aureus, Klebsiella pneumonia, Acinetobacter baumannii, Pseudomonas aeruginosa, and Escherichia coli) is posing a serious threat to public health globally (1, 2). According to the WHO, carbapenem-resistant A. baumannii (CRAB) has been one of the main concerns for the last 10 years due to the risk of antibiotic resistance. Acinetobacter baumannii is considered a “red alert” pathogen by the Infectious Diseases Society of America due to its resistance against antibiotics. It is associated with major health concerns in different regions of the world. These infections are responsible for about 1.5 million cases yearly (3, 4).

Acinetobacter baumannii is one of the most prevalent pathogens causing nosocomial infections, especially in people admitted to the intensive care units (ICUs) (5, 6). It has been demonstrated that such resistance in these pathogens is due to plasmids, transposons, and integrons, particularly class I and class II. The nosocomial propagation of isolates has been illustrated in both environmental and clinical specimens (7, 8). The development of resistance in CRAB pathogens has been increasing due to the emergence of class B, C, and D carbapenemase, which declines membrane permeability, modifies PBP, and increases efflux pump expression. Carbapenem resistance in A. baumannii is mainly mediated by intrinsic (OXA-51) or acquired (OXA-23) oxacillinases (9, 10). It is considered a health care pathogen mostly encountered in several serious medical problems such as septicemia, meningitis, bacteremia, ventilator-associated pneumonia, endocarditis, and urinary tract infection (4, 11). Epidemiologically reported data provide evidence of A. baumannii infectious globally, e.g., in Korea, Iran, Brazil, America, Europe, China, Iraq, Hong Kong, Taiwan, and Argentina. In several regions of the world, due to climate change, community-acquired pneumonia is due to this infection, as reported in the literature (12).

Resistance in ESKAPE pathogens E. faecium (13), S. aureus (14), K. pneumonia (15), A. baumannii (16), P. aeruginosa (17), and E. coli (18) is caused by the enzymatic degradation of antibiotics, target site mutations/modifications, decreased porin expression, and overexpression of multidrug efflux pumps. However, lactamases, such as carbapenem hydrolyzing class D-lactamases (CHDLs) and Metallo-lactamases, are frequently involved in carbapenem resistance. Resistance to CHDLs, also known as oxacillinases, is primarily achieved by the generation of carbapenemase enzymes encoded by the genes of blaOXA-23, blaOXA-40, and blaOXA-58 lineages; however, blaOXA-23 is the most widespread one worldwide (19). In A. baumannii, transposable elements such as insertion sequences (ISAba1) play a key role in carbapenem resistance, since they are found upstream in the promoter regions of the blaOXA-23, blaOXA-40, blaOXA-58, and blaOXA-51 genes, inducing the overexpression of these resistance genes (20, 21).

The main objectives of this cross-sectional study were to find out the AMR patterns in A. baumannii isolates and evaluate the AMR genes (blaOXA-23, blaOXA-24, blaOXA-40, blaOXA-51, blaOXA-58, blaNDM1, blaIMP, blaVIM, ISAba1, ssul1, sul2, armA, and PER-1) in these isolates from patients admitted to the surgical ICUs at different hospitals in Lahore, Pakistan.

A total of 593 clinical specimens of wound, blood, burn, and pus was collected from different local hospitals from June 2017 to March 2019 from patients admitted to the surgical ICUs in Lahore General Hospital (n-396), Mayo Hospital (n-103), and Jinnah Hospital (n-94), Lahore, Pakistan, using a simple random sampling technique. After collection, the samples were inoculated on blood and MacConkey agar using a disposable wire loop as primary, secondary, and tertiary streaking, and then the Petri plates were incubated at 37°C for 24 h. After the incubation period, the plates were observed for the appearance of bacterial colonies. Acinetobacter baumannii showed non-lactose fermenter colonies on MacConkey agar. The isolated bacterial colonies were then processed for biochemical identification of bacteria using standard biochemical tests (API) 10S kit (Biomeurix) (5).

Antimicrobial Susceptibility testing (AST) was performed by the Kirby-Bauer disc diffusion method according to the Clinical Laboratory Standard Institute (CLSI) guidelines 2020 (3). To standardize the inoculum density for susceptibility tests, McFarland standards were used (10). They were prepared by using different concentrations of barium chloride (BaCl2) and sulfuric acid (H2SO4) to make 0.5, 1, and 2% standards for visual differences. Different concentrations of BaCl2 and H2SO4 were used and stored at 4°C for further use. A fresh colony was picked by a sterile inoculating loop and suspended in 2 mL of normal saline optically equal to 0.5 McFarland standards and streaked by a swab over the entire surface in three to four planes by rotating the plate at 60 °C each time to ensure the even distribution of inoculum. In the end, the rim of agar was swabbed, and the plate was left undisturbed for 15 min to absorb the excess inoculum over it. Finally, antibiotic disks were placed on the inoculated agar plates and incubated at 37°C for 24 h.

3.3. Amplification and Detection of Resistance Genes

All of the A. baumannii isolates were processed for DNA extraction using a DNA extraction kit (WizPrepTM). The quality of DNA was checked by agarose gel electrophoresis. Then, 1% agarose gel was prepared in TAE buffer. After mixing and boiling, 0.5 mg/mL of ethidium bromide was added. The mixture was then poured into a casting tray, and a comb was inserted into it. The casting tray was left at room temperature until getting solidified. The seal and the comb were removed carefully, and the gel was placed in an electrophoresis chamber containing TAE buffer. Then, 1 µL of Thermo scientific 6X loading dye was mixed with 6 µL of sample, and a volume of 5 µL was loaded in each of the wells. The first well was loaded with Thermo scientific DNA ladder, and the remaining wells were loaded with the DNA of our interest. In the end, the lid was placed on the gel box, and electrodes were connected with it, and the gel was run at 70 volts for 30 min. The lid of the gel box was removed, and the gel was picked out from the tray using sterile gloves and placed in a gel documentation system (BioRad, Germany).

The resistance genes (blaOXA-23, blaOXA-24, blaOXA-40, blaOXA-51, blaOXA-58, blaNDM1, blaIMP, blaVIM, ISAba1, ssul1, sul2, armA, and PER-1) were amplified using gene-specific primers as given in Table 1 and amplification conditions listed in Table 2. The PCR products were loaded on an agarose gel to visualize the amplified genes using 2% agarose gel. To amplify each gene, a PCR was carried out in a final volume of 25 µL containing 1× PCR buffer, 1U Taq polymerase, 1.5 mM MgCl2, 200 µM of dNTP, 10 pmol of each primer, and 1 µL of extracted DNA. The conditions of amplification were programmed in Master-cycler Eppendorf as follows: Initial denaturation at 94°C for 3 min, 35 cycles of 94°C for 45 s, annealing varying according to the individual gene for 45 s, extension at 72°C for 1 min, and final extension at 72°C for 5 min. The PCR products were separated on the 1.5% agarose gel by electrophoresis, stained with ethidium bromide, and then visualized under a UV gel documentation system (Sigma-Aldrich) (Table 1).

The carbapenemase resistance genes, blaOXA-23 (extrinsic) and blaOXA-51 (intrinsic), were subjected to sequencing and phylogenetic analysis. Sequencing was performed using commercial sequencing services from Macrogen (Korea). We used NCBI-Nblast to determine the similarity index of the obtained sequences with already submitted sequences. The direct sequenced positive isolates were aligned to the reference sequences using phylogeny.fr software for phylogenetic tree construction.

A chi-square test with SPSS version 21.0 software was used to determine the correlation between phenotypic and genotypic resistance patterns. A P-value of < 0.05 was considered significant.

4.1. Characteristics of Specimens and Isolates

Table 3. Resistance Patterns of Imipenem and Meropenem According to the Individual Genes Among Clinical Isolates
Table 4. Phenotypic and Genotypic Resistance Rate

Different genotypes of CRAB isolates circulating in Pakistan, based on the NCBI data bank, were explained. The results disclosed that the isolates could be clustered into cardiographs, mostly represented by clade1 to clade4. The phylogenetic tree analysis indicated that blaOXA-51 was clustered in clade1 with its closely related species together. The strains were phylogenetically distinct from others and still not reported in Pakistani isolates. Similarly, blaOXA-23-like gene analysis was found in clade 2 after clade 1 and was reported for the first time in a Pakistani isolate. The relation of these resistance gene sequences with the closely related species represented 96% - 99% similarities to already submitted sequences in the NCBI databank. The phylogenetic tree represented the correlation of the strain with closely related species. The tree was generated following the neighbor-joining method (Figure 1 and Table 5). 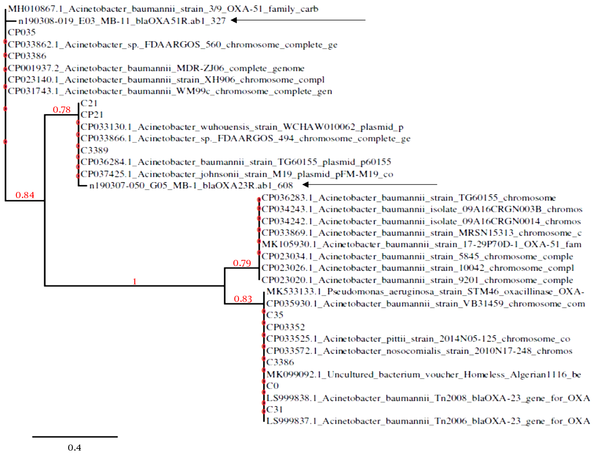 Phylogenetic tree displaying inter-relationship of genes with closely related species. The tree was developed using the neighbor-joining method. Bootstrap values (> 50%), expressed as the percentage of 1000 replications, and are shown at the nodes.

aThe mentioned GenBank Accession Numbers are of those species that showed resemblance with our sequences.

For the past 60 years, β-lactam antibiotics have been amongst the most successful drugs used for the treatment of bacterial infections in humans. Acinetobacter has emerged as a significant class of pathogens, presenting continuous threats and challenges to the health care system throughout the world (20, 26, 27). The CRAB isolates created major therapeutic problems in the hospitals examined (1, 3, 28). In the current study, we investigated the occurrence of β-lactamase and carbapenemase-producing A. baumannii in patients admitted to the ICUs of a tertiary care hospital in Lahore, Pakistan. The results of the present study showed that of a total of 457 samples for bacterial culture, 90 (19.6%) were positive for A. baumannii, 82% for E. coli, 89% for Klebsiella (89%), and 63% for Pseudomonas spp. A similar study was conducted in Iraq on a total of 112 samples, in which most samples were positive for A. baumannii, while the other organisms were Candida albicans, Staphylococcus sp., P. aeruginosa, E. coli, and K. pneumoniae (29).

A previous study reported the appearance of carbapenem-resistant A. baumannii in Pakistan and showed increased resistance to cephalosporin, sulfamethoxazole, and beta-lactam antibiotics (30). They reported that the most sensitive antibiotics were tigecycline (80%) and colistin (50%). However, the results of the current study showed that CRAB strains were 100% resistant to CIP, CRO, and SXT. Tetracycline was found moderately effective against A. baumannii, indicated by the antibiograms and minimum inhibitory concentrations (MICs). Biglari et al. (31) reported that the isolates were most resistant to carbapenems and cephalosporin (70%) with high MIC values. Except for colistin, tetracycline, and rifampicin, the difference in resistance between the ICUs and other units was statistically significant (P < 0.05). Similar results were also reported in China (32) and Iraq (29). In the present study, the isolates were 100% resistant to ceftriaxone, ciprofloxacin, and co-trimoxazole, while moderate resistance was noted against gentamycin, piperacillin-tazobactam, and tigecycline. No resistance was noted against colistin, polymixin, and tobramycin. The reason behind the variations in antibiotic susceptibility patterns of A. baumannii could be due to the prolonged hospitalization because all the samples were collected from patients who were admitted to ICUs.

A previous study from Iraq reported that genotypically identified A. baumannii represented resistance to all of the investigated β–lactam antibiotics. Besides, blaOXA-51, blaIMP, blaNDM, and blaOXA-23 were seen in 100%, 87.5%, 62.5%, and 59.4% of isolates (19). A similar study from Pakistan reported that in CRAB isolates, blaOXA-24, blaOXA-58, blaIMP, blaVIM, and blaSIM were completely absent (30). A similar result of blaOXA-24-like and blaOXA-58-like genes was also seen in the present study, as in the present study, neither of the genes was detected.

We are truly thankful for the financial support of the Faculty of Life Sciences, University of Central Punjab, Lahore, Pakistan, as a primary body to carry out the present research.