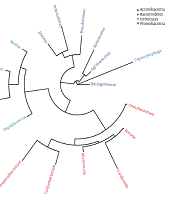 The study involved the analysis of resident skin microbiome in inner elbow of the right arm after ethical approval is issued and an informed consent form is signed by participant individuals.

Phylogenetic tree indicated the existence of four phyla, e.g., Actinobacteria, Bacteroidetes, Firmicutes, Proteobacteria. Firmicutes were shown to be the highest in abundance, while Bacteroidetes were the lowest. At the genus level, Staphylococcus was the highest in abundance, while Enterococcus was the lowest. At the species level, Bacillus cereus was the highest in abundance, while Roseomonas mucosa was the lowest. The analysis for the highly abundant operational taxonomic units (OTUs) indicated a dramatic difference between sexes referring to either genera or species of which Staphylococcus sp., Erwinia sp., Pseudomonas sp., Sphingomonas sp., Corynebacterium sp., Propionibacterium acnes, Kocuria palustris are higher in males, while Bacillus cereus, Bacillus sp., Erwinia sp., Corynebacterium sp., Micrococcus sp., Pseudomonas sp. are lower in males.

The study succeeded in detecting the skin microbiome of individuals in Saudi Arabia.

The human body is the home of more than one trillion microbes with a diverse variety of commensal microbes that play an important role in the health of the individual. These microbes inhabit diverse habitats such as the gut, skin, vagina, oral, etc. The human skin is the largest organ of the human body and plays an important role as the first line of defense against external environmental changes and invading pathogens (1). The skin is an ecosystem composed of microbial communities that inhabit a range of physiologically and topographically distinct niches, including sebaceous/nonsebaceous, hair-bearing/glabrous, moist/dry, and creased/non-creased regions (2, 3). Human microbiome in healthy skin and the overall well-being of the individual has been started to be appreciated since years ago (4). Cataloging the healthy microbiome is a mandatory first step toward identification and correction of the microbial configurations that are implicated in diseases (5). The analysis of the human skin microbiome helps detect the cause behind the occurrence of many complex diseases (6).

The aim of this study was to identify normal skin microbiome signature of healthy Saudi individuals living in Jeddah, Saudi Arabia through the analysis of 16S rRNA of the resident skin microbiome.

Eight healthy volunteers from Saudi Arabia (4 males and 4 females), aged 20 to 37 years, were enrolled in the current study. The inclusion criteria were no history of dermatologic disorders or current skin infection (atopic dermatitis, psoriasis, and stasis eczema), use of no skin creams or moisturizer before sampling, no treatment with chemotherapy or radiation, or subjects treated with antibiotics within the last three months. Samples were collected by swabbing from inner elbow of the right arm for each subject with no prior cleaning or treatment of skin surface using iSWAB Microbiome Collection kit.

Statistics of raw data for eight healthy skin microbiome are shown in Table 1, and data were described in Appendices 1 and 2, while results of OTU annotation are shown in Appendix 20. Alpha diversity was applied to analyze the complexity of species. Shannon and Simpson indices (Alpha diversity measures) indicated no significant differences between male and female groups (Appendices 3 and 21). The results in Appendix 4 indicated that F1 and F3 subjects had the lowest richness as referred to by Shannon index, while M4 and F4 showed the highest (Appendix 4). As expected, the data of evenness for Simpson index indicated opposite results (Appendix 4). Plot of principal coordinate analysis (PCoA) (shown in Appendix 5) indicated separation between male and female samples. Rarefaction curves showed that the maximum permitted number of reads for further analysis was ~73,000 (Appendix 6).

4.2. Normal Skin Microbiome Signatures at the Phylum Up to Species Levels.

A threshold of ≥ 10 reads was considered highly abundant (Appendix 20) that was met for a number of 21 out of the 28 OTUs (Appendix 22). These OTUs are described in Appendix 23. Phylogenetic tree indicated the existence of four phyla (Figure 1). They include Actinobacteria (six genera), Bacteroidetes (one genus), Firmicutes (four genera), and Proteobacteria (six genera). The results of Appendix 23 align with those of the heat maps at the different taxa levels (Appendices 7 - 12). Venn diagram showed 17 OTUs common in both male and female groups (Appendix 13), while five OTUs were unique in male (Curtobacteriumspp.1, R. mucosa, Corynebacteriumspp.4, Capnocytophaga spp.1, and Mogibacteriaceae, and six in female (Agrobacterium spp.1, Acinetobacter spp.1, Enterococcus spp.1, Gardnerella spp.1, Lactobacillus spp.1 and Corynebacteriumspp.5). The latter results were not considered for further analysis due to the low number of sequences for each OTU (Appendix 13). 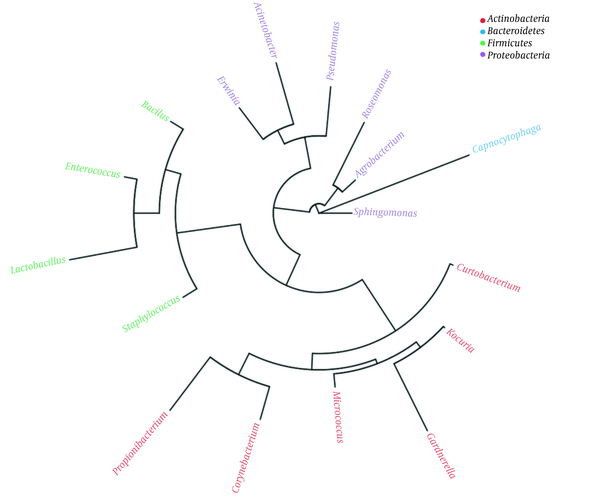 4.3. Abundance of Different Microbes Across Sex 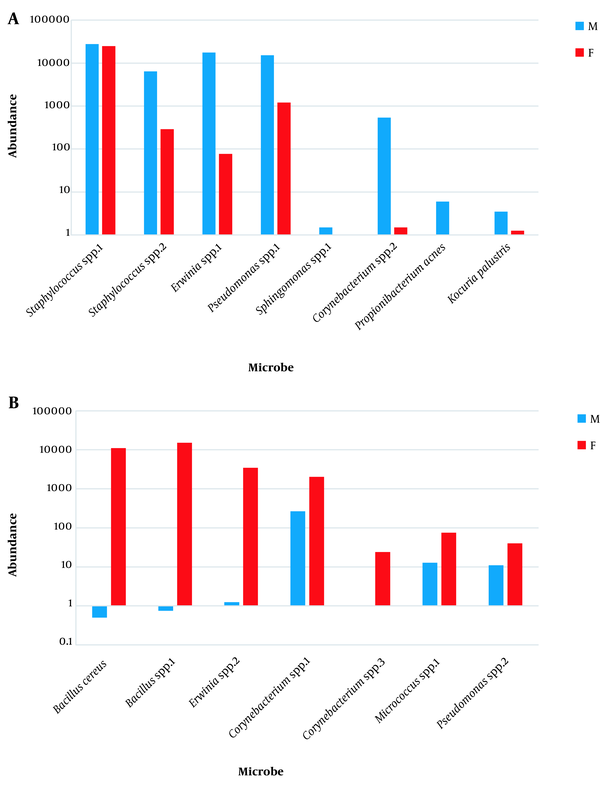 In the present study, healthy skin microbiome of Saudi residents indicated the presence of as little as six, out of 28 OTUs that were detected at species level. They refer to genera Bacillus (e.g., B. cereus), Roseomonas (e.g., P. mucosa), Kocuria (e.g., K. palustris), Propionibacterium (e.g., P. acnes), Pseudomonas (e.g., P. mendocina), and Corynebacterium (e.g., C. kroppenstedtii), respectively. These six genera belong to phyla Firmicutes (e.g., Bacillus), Proteobacteria (e.g., Roseomonas and Pseudomonas), and Actinobacteria (e.g., Propionibacterium, Kocuria, and Corynebacterium). There is one OTU (e.g., OTU26) that was detected only at family level, e.g., Mogibacteriaceae (Appendix 23). This family is part of phylum Firmicutes.

Consistent with Kim et al. (8), healthy skin microbiome in several populations at phylum level are Firmicutes, Actinobacteria, Proteobacteria, and Bacteroidetes. However, our results demonstrated the occurrence of the first three phyla, e.g., Firmicutes (342,875 reads), Actinobacteria (58,322 reads), Proteobacteria (234,757 reads), while low prevalence of Bacteroidetes (2 reads) in healthy skin microbiomes of individuals living in Saudi Arabia (Appendix 23). Results of several other studies (9) align with these of the present study in terms of abundance at the phylum level. Silva et al. (10) also reported an increased level of Firmicutes in healthy skin of different populations. These results align with those of the present study (Appendix 23). Meisel et al. (11) showed that S. epidermidis and S. hominis were prevalent for Staphylococcus. Our results align with those of Kim et al. (8) referring to genus Propionibacterium, while showed no existence of the two Staphylococci species. Interestingly, our results indicated the occurrence of two new unassigned species of Staphylococcus (Appendix 23). The two new species of Staphylococcus might have the same action of the two-missing species in microbiome signature of Saudi individuals.

We suggest that differential abundance of microbes due to gender represents extra environmental factors, influencing such differences in microbiome signature. Previous studies indicated that Propionibacterium, Corynebacterium, and Staphylococcus were more abundant in males (12), while Enterobacteriales, Moraxellaceae, Lactobacillaceae, and Pseudomonadaceae (according to Fierer et al.) (13), and Lactobacillus, Enhydrobacter and Deinococcus (According to Ling et al.) (12) were higher in females. As women use cosmetics more frequently than men (in accordance with Fierer et al.) (13), thereby altering the microbial community structure and diversity of their skin may definitely affect microbe richness and relative abundance compared to men.

Overall, the study highlights skin microbiome signature of individuals in Saudi Arabia. This information will be helpful when studying skin microbiomes of patients with atopic dermatitis (AD), Psoriasis, or Acnevulgaris toward the detection of biomarkers of the different diseases.

Authors thank authorities at the Department of Biological Sciences, Faculty of Science, King Abdulaziz University, Jeddah, Saudi Arabia, for providing facilities and equipment to do this research.