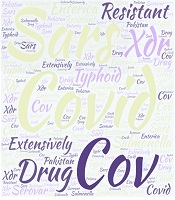 Viral infections are increasing day by day (1-3). Severe acute respiratory syndrome (SARS) coronavirus 2 (SARS-CoV-2) pandemic has resulted in the negligence of diseases such as diabetes, heart diseases, and many more. Among these neglected diseases is extensively drug resistant (XDR) typhoid fever. Intensive care units in hospitals are hotspots for antimicrobial resistance (4). Although antibiotics do not inhibit SARS-CoV-2 replication, yet viral respiratory infections may lead to bacterial pneumonia (4). Hydroxychloroquine and azithromycin have been frequently used for COVID-19 ailment based upon small uncontrolled studies, which showed preliminary effective results. Azithromycin is commonly used to potentially treat or prevent co-infection with SARS-CoV-2. It has been reported that azithromycin may have antiviral properties against RNA viruses such as Zika, rhinovirus, and SARS-CoV-2 (4-7).

In Pakistan, since 2016, there have been several outbreaks of antimicrobial resistant strains of Salmonella enterica serovar Typhi belonging to the H58 haplotype that cause XDR typhoid fever (8). The H58 strains are resistant to chloramphenicol, ampicillin, and trimethoprim-sulfamethoxazole antibiotics (9). Salmonella enterica serovar Typhi has shown resistance to fluoroquinolones and ceftriaxone (10), while orally only azithromycin antibiotic has shown significant responses for the treatment of XDR typhoid. In Pakistan, azithromycin has been given to treat COVID-19 patients while neglecting the prevalence of XDR typhoid fever. This might bring havoc in the near future if XDR becomes resistant against azithromycin. Of note, XDR typhoid fever has been extensively misdiagnosed before due to serological tests such as Widal and Typhi DOT, which are still in practice by several physicians, despite the fact that the National Institute of Health has clearly directed to stop the diagnosis of typhoid fever via serological tests (11).

Contemplating the importance of phages and lytic enzyme biology might facilitate designing novel therapeutic options against multiple drug-resistant bacteria (12). Azithromycin is neither the cure for COVID-19 nor can it block SARS-CoV-2 replication. In several countries, it has been empirically prescribed by many physicians to save lives. However, the unnecessary usage of azithromycin should be immediately discontinued because it is the only oral antibiotic left that is effective against XDR typhoid. Development of azithromycin resistance in XDR typhoid may result in future epidemics of potentially untreatable typhoid. The need of the hour is also to explore further therapeutic options such as phage therapy against XDR typhoid fever.