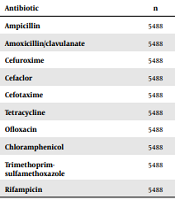 Haemophilus influenzae is an opportunistic pathogen of the human respiratory tract. Haemophilus influenzae can cause not only respiratory tract infection in children but also otitis media, epiglottitis and sinusitis. With the widespread use of antibiotics, the positive rate of β-lactamase in H. influenzae is increasing, and the rate of antimicrobial resistance is also increasing, which increases the difficulty of clinical treatment.

To study the infection characteristics of patients and the antibiotic resistance of H. influenzae in lower respiratory tract samples of children in Chengdu, so as to provide a reference for its clinical diagnosis and the rational use of antibiotics.

Sputum samples of 15891 children aged 0-14 years with lower respiratory tract infection were collected. Haemophilus influenzae was cultured and identified, its drug susceptibility tested, and the results determined according to the guidelines of CLSI 2020.

A total of 15891 clinical isolate strains in sputum were detected for drug sensitivity from December 2018 to January 2020, of which 5488 were H. influenzae, accounting for 34.54% (5488/15891). The sex of children infected with H. influenzae was not skewed (P > 0.05). The detection rate of H. influenzae was the highest in children aged 7 - 11 months, and the lowest was in the age group ≤ 28 d. The detection rate was the highest in spring and the lowest in autumn. The positive rate of β-lactamase was 92.0%, the resistance rate to ampicillin was 92.0%, the sensitivity to amoxicillin/clavulanate was 70.2%, and the sensitivity to cefotaxime, ofloxacin, tetracycline, chloramphenicol, and rifampicin was more than 90.0%.

Children aged 7 months to 14 years were generally susceptible to H. influenzae in spring, and the positive rate of β-lactamase was high. Doctors should refer to the infection characteristics and drug resistance of H. influenzae and choose antibiotics correctly to better control the infection.

Haemophilus influenzae is a Gram-negative bacillus that has a capsule and a high colonization rate in the respiratory tract and can cause infection in many parts of the body, including otitis media, epiglottis, sinusitis, and pneumonia (1). Children are generally susceptible to bacteria because of their special physiological and immune status. The main route of transmission of H. influenzae is respiratory droplets, and a special route of transmission in children is through inhalation of maternal amniotic fluid or exposure to genital tract secretions during spontaneous delivery (2). Due to the strong pathogenicity of H. influenzae, if children are not actively treated after infection, it may lead to serious consequences, such as bacteremia and meningitis (3). With the overuse of antibiotics and the development of various drug resistance mechanisms, the resistance rates of H. influenzae to ampicillin and first-line cephalosporins are rising (4, 5). In recent years, due to the irregular use of antibiotics in children, the drug resistance rate of H. influenzae has increased (6). Laboratory support is urgently needed for its treatment, including early identification of H. influenzae and selection of antibiotics it will be sensitive to (7).

A total of 15891 clinical isolate strains in sputum were collected from outpatients and inpatients at Chengdu Women's and Children's Central Hospital, School of Medicine, University of Electronic Science and Technology of China. Patients from the Chengdu region were selected over a 2-year period from February 2018 to January 2020. The subjects were between 1 day and 14 years of age and included 9236 males and 6655 females. There were 1786 newborns (≤ 28 days), 5118 infants (29 days-6 months) and 2058 babies aged 7 months to 11 months; 6010 children were aged 1-3 years, 792 were aged 4 - 6 years, and 127 were aged 7 - 14 years. According to the season, the sputum samples were divided into four groups: spring, summer, autumn and winter, including 3987 cases in spring, 3267 cases in summer, 3266 cases in autumn and 5371 cases in winter.

According to the literature (8), specimens were collected by physicians and put into a sterile container. Then the specimens were sent to the laboratory, and proper screening of sputum with Gram staining was performed immediately. A total of 20 - 40 visual fields were detected under microscope, according to the qualified standard of sputum: sputum specimens containing > 25 leukocytes but < 10 squamous epithelial cells per low-power field (LPF, × 100) were considered of good quality for bacterial culture in patients. Otherwise, the sputum sample was considered contaminated by saliva and rejected (9).

Sputum specimens were cultured in accordance with the operational requirements of the fourth edition of the National Rules for Clinical Examination. The plates were placed at 35°C and cultured in a 5 - 10% CO2 incubator for 18 - 24 hours. Clear or translucent, flat, moist, dew-drop colonies were selected, confirmed as Gram-negative bacilli under the microscope, and then identified using the VITEK 2 compact automatic microbial identification system (BioMerieux, France) (7).

SPSS Statistics version 22 (SPSS Inc. Chicago, IL, USA) was used to analyze the data. The statistical test used for all data was the chi-square test. P < 0.05 was considered to be statistically significant.

Among the 5488 strains of H. influenzae detected from 15891 clinical isolate strains in sputum, there were 3197 males and 2291 females. Sex comparison showed that there was no significant difference (P > 0.05), as shown in Table 1.

Of the 5488 strains detected, 5049 (92.0%) were positive for β-lactamase. The resistance rate of the H. influenzae isolates to ampicillin was 92.0%. The resistance rates to cefuroxime, cefaclor and trimethoprim-sulfamethoxazole were all more than 60.0%. It was found that the sensitive rate of H. influenzae to tetracycline, chloramphenicol and rifampicin was more than 90.00%. The sensitive rate to amoxicillin/clavulanate was 70.2%. No resistance to cefotaxime or ofloxacin was detected (Table 4).

Haemophilus influenzae is a common pathogen of community-acquired infection in children (12, 13). Bacteria mainly cause infection in children, including pneumonia, otitis media, cellulitis, arthritis, meningitis, bloodstream infection and other diseases, making it a serious threat to children's health (14, 15). In recent years, with the overuse of antibiotics in children, the drug-resistant strains of H. influenzae are growing in number, which brings great difficulties to treatment (7).

Owing to the imperfect development of children's respiratory system, relatively low immune function and the high microbial colonization rate, the infection rate of H. influenzae in children has been very high (16, 17). For economic reasons and lack of awareness of H. influenzae, although the Chinese government recommended that infants be vaccinated against H. influenzae nationwide and launched a self-pay H. influenzae type b strain vaccine, there are still many unvaccinated children, and the infection caused by non-type b or non-typeable H. influenzae strains is still a serious problem. These strains are currently the most common cause of invasive H. influenzae infection in many countries (18, 19).

With the development of various drug resistance mechanisms, such as β-lactamase activity and modified bacterial penicillin binding protein (21), the range of antibiotics active against H. influenzae has gotten narrower, especially given the limited set of antibiotics that can be given to children. It is of great significance to study the antibiotic resistance of H. influenzae in children. Most H. influenzae strains are phenotypically β-lactamase negative and ampicillin susceptible (BLNAS), so ampicillin and amoxicillin/clavulanate, as well as third-generation cephalosporins such as cefotaxime, are among the drugs of choice for the treatment of H. influenzae infections (22), but in our study, of the 5488 strains detected, 5049 (92.0%) were positive for β-lactamase. The H. influenzae ampicillin resistance rate was 92.0%, which was higher than what had been found in previous studies in China (58.1%) (7), Iran (54.8%), Germany (11.6%) and Poland (29.1%) (7, 23), but close to the ampicillin resistance rate in South Korea (69.4%) (7).

These data suggested that the overall enzyme production rate of H. influenzae was high and had an increasing trend, which was also the main reason for the drug resistance of H. influenzae. The differences in the above results may also be due to differences in geographical location or the use of antibiotics by children. The sensitive rate to amoxicillin/clavulanate was 70.2%. Therefore, single penicillin-type drugs, such as ampicillin and amoxicillin, are not recommended in clinical treatment, but β-lactamase inhibitors are recommended for antibacterial treatment. The resistance rate of cefotaxime was very low, which was consistent with previous studies in Taiwan and Germany (3, 22). The resistance rates to cefuroxime, cefaclor and trimethoprim-sulfamethoxazole were all more than 60.0%, and the sensitive rates of H. influenzae to tetracycline, chloramphenicol and rifampicin were more than 90.0%. Due to the limitations of their use in children, we do not recommend ofloxacin, tetracycline, and chloramphenicol for children. Since H. influenzae showed low resistance rates to amoxicillin/clavulanate and cefotaxime, they have good antibacterial activity in children with H. influenzae infection and might be appropriate for this population.

In recent years, the resistance rate of H. influenzae to ampicillin has gradually increased. Microbiological laboratories should pay attention to and strengthen the culture and drug resistance surveillance of H. influenzae. At the same time, physicians should choose antibiotics reasonably according to the results of drug sensitivity tests, control the spread and prevalence of drug-resistant bacteria, and avoid unreasonable drug use.

In conclusion, children aged 7 months to 14 years were generally susceptible to H. influenzae in spring, and the positive rate of β-lactamase reached 92.0%. Amoxicillin/clavulanate or cefotaxime can be used as the first choice for treatment. To better control the infection, physicians can refer to these characteristics and antibiotic resistance of H. influenzae for diagnosis and treatment.

We are thankful for the funds given to support the experiments and to all coauthors for devoting their time to the manuscript.