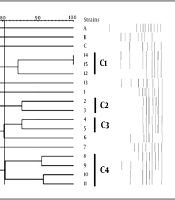 In this study, 240 K. pneumoniae isolates were collected from clinical samples in three clinical centers of Isfahan, Iran, during February 2017 and November 2018. All isolates were identified using biochemical, microbiological, and molecular methods, and then antimicrobial susceptibility tests were performed to find MBL-producing isolates via phenotypic and genotypic detection methods. Moreover, the minimum inhibitory concentration (MIC) of antibiotics against MBL-positive strains was determined by E-test. Eventually, the clonal relatedness of the MBL-positive strains was analyzed using both multilocus sequence typing (MLST) and rep-PCR.

Here, we reported the emergence of MBL-producing K. pneumoniae in clinical centers of Isfahan, Iran. The findings are alarming and represent the urgent need for the application of infection control programs.

Klebsiella pneumoniae is a major nosocomial pathogen that causes difficult-to-treat infections worldwide and leads to several hospital-acquired and community-acquired infections, including urinary tract infection, skin and soft tissue infection, wound and bloodstream infection, meningitis, and ventilator-associated pneumonia in healthcare settings (1). Many virulence factors can result in various diseases by overcoming the immune system. Some of the virulence factors of K. pneumoniae include capsular polysaccharides, lipopolysaccharide, and fimbrial adhesins. According to the resistance of pathogenic bacteria to different antibiotics leading to defective treatment, finding treatment options has turned into a challenge in the world (2).

The virulence potential of Klebsiella can be intensified through multidrug resistance of K. pneumoniae against antibiotics used for the treatment of bacterial infections. Beta-lactam antibiotics are usually used for this purpose, and the production of B-lactamase enzymes results in bacterial resistance (3). Healthcare-associated infections with extended-spectrum beta-lactamase (ESBL)-producing K. pneumoniae have become common globally and are associated with increased morbidity and mortality, as well as higher hospitalization (4). Carbapenems are the main antimicrobial agents of choice for treating infections caused by extended-spectrum beta-lactamases (ESBLs) and Amp C-producing Gram-negative bacteria (5).

The main mechanism associated with carbapenem resistance is majorly attributed to the production of beta-lactamases (6). Currently, carbapenem resistance due to metallo-beta-lactamases (MBLs) production is increasingly reported among clinical isolates worldwide. The most common MBLs in clinical isolates include imipenemase (IMP), Verona integron-encoded metallo-lactamase (VIM), and New Delhi beta-lactamase (NDM) encoded by carbapenem-resistance genes blaIMP, blaVIM, and blaNDM, respectively (7). These enzymes use Zn (II) as a vital cofactor for the cleavage of the beta-lactam ring and inactive these antimicrobials. They have a wide spectrum of the substrate and can hydrolase all bicyclic beta-lactam antibacterial agents, including cephalosporins, penicillins, and carbapenems.

Although MBLs are not able to identify and inactivate monobactams, they are expressed simultaneously with serine beta-lactamases that can hydrolyze these monocyclic beta-lactams (8). The Middle-East is considered an endemic region for carbapenemase-producing K. pneumoniae, with the dominance of NDM carbapenemases (9), with the sporadic occurrence of class B VIM and IMP enzymes (10). Reports of MBL-producing K. pneumoniae isolates from Iran have markedly increased since last year and have shown a typical geographical distribution, most probably due to the over-prescription of antimicrobial agents or poor infection control in healthcare settings (11, 12). In 2013, blaNDM-associated carbapenem-resistant K. pneumoniae was ﬁrst reported in Iran (13). Since then, blaNDM has been detected in most Enterobacterales species (9, 14, 15). Furthermore, sporadic isolates carrying blaIMP and blaVIM were identiﬁed in Iran (10).

Typing methods can also help trace the transmission of pathogens in healthcare settings, pinpoint the source of infection, and classify virulent strains with reduced antibiotic susceptibility. Several studies have shown repetitive element palindromic PCR (rep-PCR) as a simple, cost-effective, and reproductive method with high resolution that can be used for high or small numbers of bacterial isolates to fingerprint strains of K. pneumonia, among other Gram-negative species (16). There has been an excellent correlation between rep-PCR and multilocus sequence typing (MLST) and rep-PCR in K. pneumonia fingerprinting. MLST is considered the gold standard for molecular typing of several bacterial species with high comparability, reproducibility, and transferability between labs (17).

This study aimed to determine the presence of MBL genes among carbapenem-resistant K. pneumoniae isolates recovered from patients in three teaching hospitals of Isfahan, Iran, and also to determine their clonal relatedness using MLST and rep-PCR.

Susceptibility to antimicrobials was determined using the disk diffusion assay according to the guidelines of the Clinical and Laboratory Standards Institute (CLSI) M100-S27 criteria (19, 20). All antimicrobial discs were obtained from MAST (MAST Group Ltd., United Kingdom). Moreover, Escherichia coli ATCC 25922 and Pseudomonas aeruginosa ATCC 27853 were used as the control strains. Eventually, all data were analyzed using WHONET 5.6 software. According to the zone diameter around each antibiotic disk, the results were interpreted as sensitive, intermediately sensitive, and resistant.

Simple screening tests for the detection of metallo-beta-lactamase (MBL) production were performed using the meropenem-EDTA Combined Disk Test (MEM-EDTA CDT). Briefly, a 0.5 McFarland standard inoculum from overnight cultures was prepared and inoculated on a Mueller-Hinton (MH) agar plate. Two MEM disks were plated on the top of the agar at a distance of 4 - 5 cm from each other. Then, 10 μL of 0.1 M EDTA (Sigma, Germany) was added to one of the MEM disks. Finally, the difference in the zone size (5 mm) between MEM and MEM+EDTA indicated the presence of an MBL (11).

The genomic DNA was extracted using the GeneAll Exprep Plasmid kit (GeneAll Biotechnology, Seoul, Korea) according to the manufacturer’s directions. For plasmid extraction, plasmid isolation of strains containing the blaNDM gene was performed by GeneAll Exprep Plasmid kit (GeneAllBiotechnology, Seoul, Korea) according to the manufacturer's protocol.

Minimum inhibitory concentration (MIC) values of meropenem, imipenem, cefepime, ceftriaxone, cefotaxime, piperacillin/tazobactam, trimethoprim/sulfamethoxazole, amikacin, ciprofloxacin, and doxycycline were interpreted for MBL-positive strains according to the CLSI guidelines using the gradient test strips (BioMerieux, CAT No. 412302) (29). On the other hand, the MIC of colistin was determined by broth macrodilution method via colistin sulfate (Sigma–Aldrich), and finally, EUCAST breakpoints were used for interpretation (30).

Thermal cycling was carried out as previously described (31). The amplicon fragments were separated using electrophoresis on a 2% agarose gel with a 100 bp DNA size marker (Sigma Chemicals, Ontario, Canada). The amplicons were visualized under UV following staining, and the banding patterns of each strain were recorded by using Gel Doc (Biorad, Hercule, CA, USA). The REP-PCR fingerprints were analyzed by the GelJ gel analysis package (32), and the similarity of strains was determined using the Dice coefficient for comparison and unweighted pair group method with arithmetic averages (UMGMA) method for clustering. 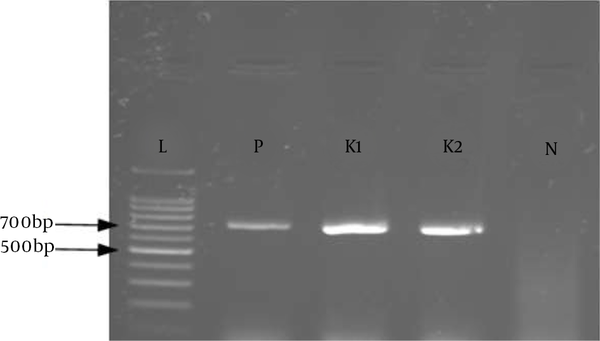 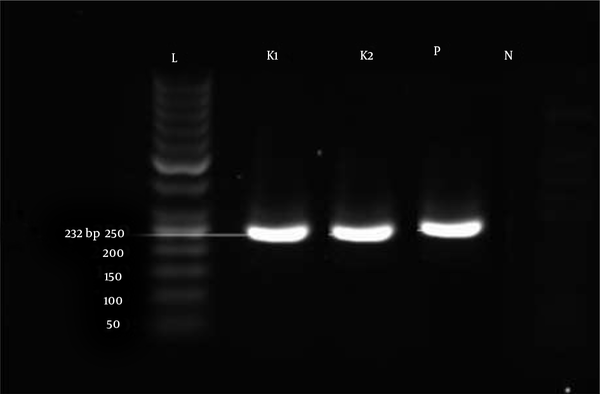 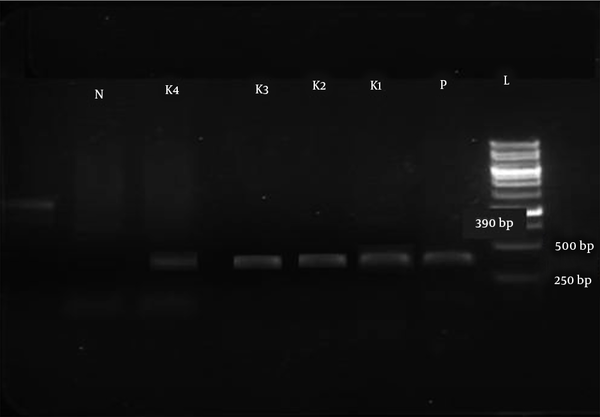 The MICs of different antibiotics against MBL-positive strains are shown in Table 4. In all the MBL-positive isolates, the maximum resistance rates (MIC > 256 µg/mL) were observed for beta-lactam antibiotics. Except for two isolates (one NDM producer and one VIM producer), the other strains were sensitive to colistin, with MICs ranging from 0.125 to 1 µg/mL (Table 4).

The gel electrophoresis image of rep-PCR products is presented in Figure 4. The predominant fragments in DNA fingerprints were determined with sizes of 390 bp, 600 bp, and 1500 bp in MBL-producing K. pneumoniae strains, and the sizes of bands varied from 300 bp to 1500 bp. The strain similarity among the strains was detected with GelJ version 3.0 software (Java Application, Logroño, Spain) using the Dice method for determining the similarity of strains and UPMGA for clonal clustering. This software allowed us to draw a phylogenetic tree for strains based on the presence of a variety of genetic heterogeneities among their populations. The cluster analysis and the obtained dendrogram are shown in Figure 5. 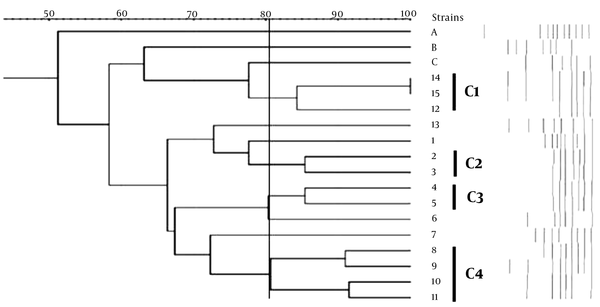 Klebsiella pneumoniae is a major nosocomial pathogen that causes difficult-to-treat infections worldwide (23). Klebsiella pneumoniae is the cause of nosocomial and community-acquired infections, virulence-associated genes, fimbriae, and siderophores, which can cause infection. Drug-resistant, especially ESBL-producing, K. pneumoniae strains contribute to treatment failure and increase morbidity and mortality in patients. The prevalence of MBL-producing K. pneumoniae has increased in recent years in Iran (11, 12, 14). In the present study, 81 carbapenem-non-susceptible K. pneumoniae isolates were collected, among which 15 isolates were confirmed to produce MBLs.

Consistent with our data, several studies showed that the prevalence rates of ESBL-producing K. pneumoniae isolates in a teaching hospital were 53.8% (33) and 57.14% (34). A similar study reported a prevalence of 35% (35), which is approximately close to the current study’s percentage. Also, a study reported that among K. pneumoniae clinical isolates from Imam Khomeini hospital in Tehran, 55.4% were ESBL producers (36). In contrast, lower percentages of ESBL-producing isolates were reported from the Middle East and some other countries. It seems that different policies in using antibiotics in each region are the cause of the contradiction (37).

Minimum inhibitory concentration determinations revealed that all MBL-producing K. pneumoniae isolates were highly resistant to beta-lactam antibiotics, with significant resistance to ciprofloxacin and amikacin, in line with previous reports (12, 13). The resistance rate to ciprofloxacin has been reported differently in the studies. These rates in some studies such as Derakhshan et al. (38), Liu et al. (39), and Ranjbar et al. (40) studies were 44.4%, 37.1%, and 52.5%, respectively. On the other hand, some studies have reported rates below 20% (23, 41). Interestingly, all of our MBL-producing K. pneumoniae isolates were multidrug-resistant. Moreover, all isolates retained susceptibility to colistin, except for two isolates. Consistent with previous studies, our findings showed colistin as the most effective antibiotic against these isolates (12, 42). This finding can indicate its high importance for treating Gram-negative infections with carbapenems.

The detection of MBL-producing K. pneumoniae strains in the clinical laboratory could be significant for the determination of suitable therapeutic strategies and limiting the spread of these strains (42). Preliminary screening of MBL producers was done using CDT. Of the 81 carbapenem-resistant isolates tested in the current study, 25 (30.8%) were phenotypically positive. In the current study, CDT was positive for all of the MBL producers that we tested, indicating that the method could be reliable for the detection of MBL producers, as routinely recommended (11, 43). In our study, all of the isolates that were confirmed as resistant to carbapenem were subjected to PCR using blaVIM, blaIMP, blaNDM, blaSPM, blaGIM, and blaSIM via specific primers (Figures 2, 3, and 4). The results revealed that three MBLs, blaVIM-1, blaIMP-1, and blaNDM-1,were detected in 11/81 (13.6%), 2/81 (2.4%), and 2/81 (2.4%) isolates, respectively. In recent years, the detection of MBLs and other antibiotic resistance genes of K. pneumoniae has been reported in several areas of Iran (10-12). However, in the present study, none of the isolates harbored blaSPM, blaGIM, and blaSIM genes; similar results were reported by Solgi et al. (12).

It seems that the reason for contradictions in studies is the differences in infection control systems and therapeutic regimens in different countries (46). In this study, three STs (ST23, ST147, and ST15) were identified among 15 MBL-positive K. pneumoniae isolates. Among them, ST23 with 11 isolates was the predominant MBL-producing K. pneumoniae that was disseminated across four wards. Importantly, all of the ST23 isolates carried the blaVIM gene. This result suggests that VIM-1-producing K. pneumoniae ST23 strains circulated in our studied hospitals. Therefore, it is necessary to identify the clonal relatedness among MBL-producing K. pneumoniae strains to strengthen the surveillance and reporting system in hospital infection control programs. As reported, ST23 has been linked to the spread of OXA-48, VIM, and NDM-1 in various countries (10, 12). In line with the report by Solgi et al. (12), which described that ST147 was NDM-1-producing K. pneumoniae in Iran, 13.3% (2/15) of the NDM-1-positive isolates belonged to ST147 in this study (Table 5). These results suggest that the nosocomial clonal spread of NDM-1-producing ST147 K. pneumoniae plays a significant role in the detection of blaNDM-1.

According to these results, rep-PCR could be considered a suitable tool for the rapid identification of strains with high epidemic potential that may be required for local outbreak studies. Overall, the present study showed a mini-outbreak of VIM-1-producing K. pneumoniae that belonged to ST23. The MIC of different antibiotics against MBL-positive strains indicated high antibiotic resistance. The prevalence of K. pneumoniae isolates harboring blaVIM, blaNDM, and blaIMP is a rising threat in Iran. Therefore, infection control strategies are of importance to prevent the transmission of these organisms in Iran. According to our results, the presence of virulent factors in the development of infections through K. pneumoniae can be considered an important step. Therefore, they play an important role in the spread of infections caused by K. pneumoniae.