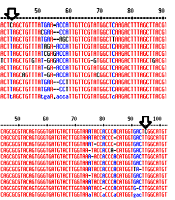 Acinetobacter baumannii is the causative agent in various types of hospital-acquired infections, including respiratory, urinary tract, and wound infections.

This study investigated the primary mechanisms underlying quinolone resistance in A. baumannii strains, isolated from samples collected from general hospitals.

In the antimicrobial susceptibility test, 78.1% (n = 50) of the strains exhibited resistance to ciprofloxacin, a quinolone antibiotic, and 57.8% (n = 37) strains were multidrug resistant (MDR). For 18 strains, the minimum inhibitory concentration of ciprofloxacin reduced in presence of an efflux pump inhibitor. Sequence analysis revealed that in 50 strains of A. baumannii, the codon for serine (TCA) in gyrA was replaced by that for leucine (TTA), whereas in 43 strains, the codon for serine (TCG) in parC was replaced by that for leucine (TTG). Multilocus sequence typing analysis confirmed 18 sequence types, and allelic number analysis showed the presence of nine gyrB alleles, with gyrB3 showing the highest frequency (62.5%).

The findings of this study will be useful in improving treatment efficiency and preventing the spread of A. baumannii (both MDR and non-MDR strains).

Acinetobacter baumannii is an aerobic Gram-negative bacillus. This major pathogen causes various types of hospital-acquired infections, such as respiratory, urinary tract, and wound infections (1). Acinetobacter baumannii is resistant to major antibiotics, including β-lactams, aminoglycosides, and quinolones. Outbreaks of multidrug-resistant (MDR) bacteria significantly affect the treatment of patients with severe infections (2). Ciprofloxacin, levofloxacin, and sparfloxacin are representative quinolone antibiotics, which exhibit antimicrobial activity against Gram-positive and Gram-negative bacteria and have shown clinical efficacy in treating respiratory infections. They can be orally administered due to their stable chemical structures and excellent tissue permeability. Quinolones are known to exhibit excellent permeability as they usually enter the cells via porin (membrane transport protein) located in the outer membrane of bacterial cells (3). In bacteria, efflux pumps actively transport antibiotics from cells and are known to be the primary cellular components mediating the natural resistance of Gram-negative bacteria to various antibiotics (4).

In recent times, pulsed-field gel electrophoresis and multilocus sequence typing (MLST) have been used to trace the lineage or origin of most epidemic strains, including those of A. baumannii. Among the structural genes with varying sequences in different species, primers for gltA, gyrB, gdhB, recA, cpn60, gpi, rpoD, pgm, quiA, and pcaf are used for A. baumannii. Among these, the high allelic number of gyrB indicates frequent mutations, which also leads to the expression of various STs (5, 6). Multiplex PCR analysis using the gyrB primer was confirmed to be the most rapid method for distinguishing and identifying A. baumannii and four other A. baumannii complexes (5, 6). Matrix-assisted laser desorption/ionization-time of flight (MALDI-TOF) mass spectrometry (MS) analysis identifies the measurable molecular weight (100 Da to 100 kDa) and the bacterial cell count corresponding to one or two colonies (105 to 106) by examining the protein peaks (7).

The effluent pump inhibition influence test and sequencing of quinolone resistance-determining region (QRDR) of gyrA and parC genes were conducted to determine the cause of resistance of quinolone-based antibacterial agents. In addition, MLST was performed to determine the genetic correlation of the structural gene gyrB with the amino acid variation at a specific site of gyrA called QRDR. The protein molecular weight of each strain was measured and compared with the results of antimicrobial sensitivity tests.

The efflux pump inhibition test was performed using phenylalanine-arginine β-naphthylamide (PAβN), an efflux pump inhibitor (EPI), on 50 strains with confirmed ciprofloxacin resistance in the antimicrobial susceptibility test. The second- and third-generation quinolone antibiotics, ciprofloxacin and levofloxacin (Sigma-Aldrich, USA) respectively, were used. PaβN was administered at 100 μg/mL, and comparison of MIC reduction of the antibiotic in presence and absence of EPI was measured (10). The MIC of the antibiotic was measured using the solid medium dilution method, as directed in the CLSI guidelines (2020, M100-S30) (9). E. coli ATCC 25922 was used as the standard strain.

3.4. Analysis of QRDR Sequence of gyrA and parC

Multilocus sequence typing analysis was performed as directed in PubMLST (13). Information regarding the seven structural genes used in the study was confirmed from the MLST website and used for primer designing, followed by PCR (14). Each of the seven structural genes was provided a unique allelic number through PubMLST, and the final ST of A. baumannii was determined using a combination of the unique alleles (Table 1). The correlation between the allelic number of gyrB, a structural gene of A. baumannii, and STs was investigated. The relationship between the strains was confirmed by comparing the results of the antimicrobial susceptibility test and a peak analysis (performed using the MALDI-TOF MS).

MALDI-TOF MS analyzed the differences in the protein composition of A. baumannii and distinguished between the different groups of Acinetobacter. This method confirmed the spectral peak of a ciprofloxacin-resistant A. baumannii strain. A detailed analysis was performed on the spectrum obtained for the A. baumannii target strain in the region between 2,000 m/z and 18,000 m/z using the SARAMIS database (15).

Of the 98 strains of A. baumannii isolated from clinical specimens, 64 were eventually selected through biochemical testing using VITEK® 2 XL (bioMérieux) and PCR detection of the blaoxa-51-like gene.

Fifty ciprofloxacin-resistant strains (MIC ≥ 4 μg/mL, as indicated in the antimicrobial susceptibility test) were evaluated in the efflux pump inhibition test using PaβN (Appendix 1 in Supplementary File). The MIC of ciprofloxacin for 18 strains was lower in presence of PaβN than that in its absence, and the reduction in MIC was four-fold for 2 strains and two-fold for 16 strains. The MIC of levofloxacin reduced for 43 strains. The reduction was eight-fold for 2 strains, four-fold for 18 strains, and two-fold for 23 strains.

4.4. Sequence Analysis of QRDR in gyrA and parC

In all 50 strains of A. baumannii, the codon for serine (TCA) at the 83rd position in the gyrA sequence was replaced by that for leucine (TTA) by a point mutation. In 43 strains, the codon for serine (TCG) at the 80th position in parC sequence was replaced by that for leucine (TTG); this mutation was not observed in 7 strains. Therefore, mutations were identified in both gyrA and parC in 43 strains (Figure. 1). 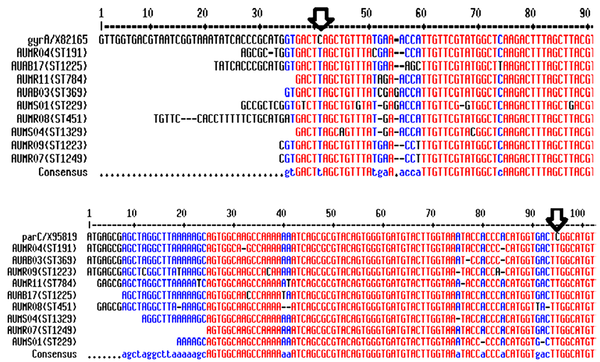 Mutation site marked with an arrow in the two images. Comparison of the mutations in gyrA and parC in Acinetobacter baumannii, with sequencing of wild-type gyrA and parC genes (GenBank Accession No. X82165 and X95819, respectively).

Acinetobacter baumannii is an opportunistic infectious bacterium that causes severe nosocomial infections. The emergence of MDR strains has also been a frequent occurrence in recent years (16). Kumburu et al. (17) reported a result slightly different from this study, with 50% ciprofloxacin resistance in MRAB strain causing infection associated with wounds and pus, which was isolated from hospitals and clinics in Tanzania (Africa) from 2013 – 2015. However, the resistance rates reported for ceftazidime (78.6%, n = 11) and gentamicin (64.3%, n = 9) were similar to those obtained in this study. Sequence analysis was performed to identify potential mutations in the gyrA and parC sequences of the 50 ciprofloxacin-resistant A. baumannii strains.

In gyrA, the codon for serine at the 83rd position was replaced by that for leucine via a point mutation in all the 50 A. baumannii strains. In 86% (n = 43) of the strains, the codon for serine at the 80th position of parC was replaced by the codon for leucine. Lee et al. (18) reported a new point mutation with tryptophan at the Ser-80 position in parC. Thus, high ciprofloxacin resistance was confirmed when the point mutations inducing the replacement of Ser-83 by Leu and Ser-80 by Trp occurred simultaneously. Here, the 43 strains with both gyrA and parC mutations had relatively high MIC values (32 – 256 μg/mL) compared to that of strains with only gyrA mutations.

Meanwhile, MLST analysis of the 64 strains showed the presence of 18 STs, and ST191 accounted for the majority (39%, n = 25) (Table 2). In a study on the gene cassette and molecular typing of A. baumannii integrons isolated from clinical specimens (19), ST195, ST208, ST218, and ST368 were isolated from regions in the vicinity of Shaanxi and Xi’an, China. The STs belonging to CC92 were slightly different from those obtained previously (ST208 and ST1145), suggesting that CC92 exhibited global and regional differences not only in European countries such as Italy, Spain, United Kingdom, Greece, and Denmark, but also in Asian countries such as China, Korea, Thailand, India, and Lebanon. CC92 produces various carbapenemases and is considered the largest and most widely distributed clone worldwide, accounting for the majority of MRAB strains (19). In addition, AUAB08, AUMR02, and AUMR22, identified under ST191, had mutations in both gyrA and parC, and the MICs were as high as 256 μg/mL. In contrast, AUAB22, AUMR17, and AUMR26, also identified under ST191, had mutations only in gyrA, and the MICs were relatively low (32 – 64 μg/mL). This suggests that even within the same ST, differences in sensitivity may occur due to the presence of various ciprofloxacin resistance mechanisms.

Here, most of the A. baumannii strains exhibited multidrug resistance to various antibiotics, including ciprofloxacin and levofloxacin. Our findings will be useful in antibiotic selection during the treatment of infections caused by MRAB. These findings may also help to determine the effective antibiotic concentration and the methods for preventing group infection and its spread.